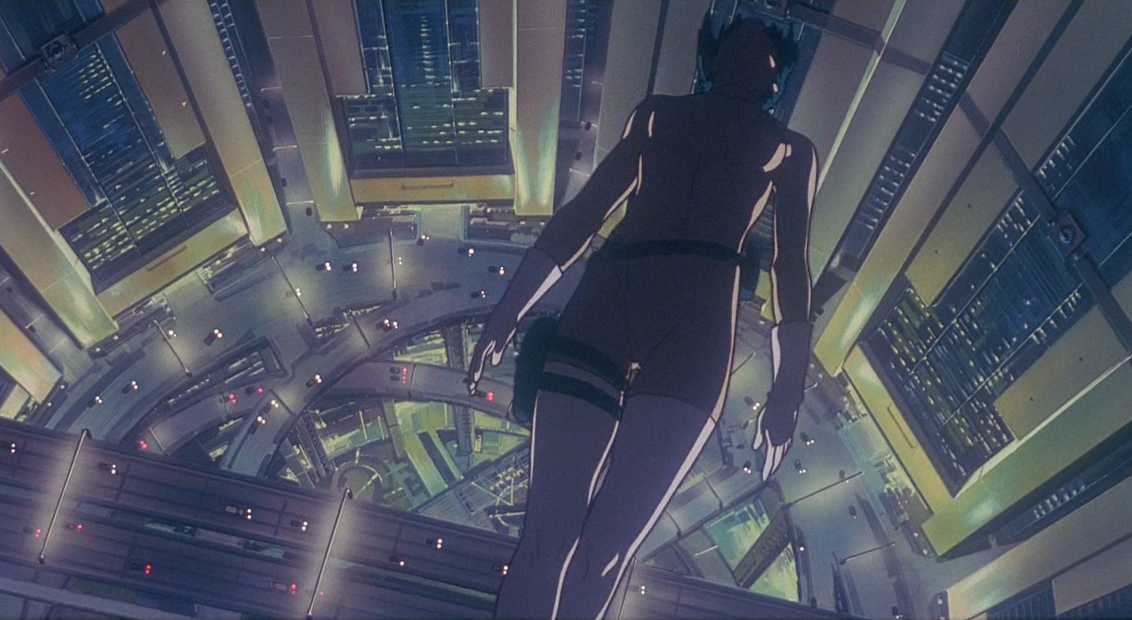 In the real world, our relationship with large cities is strange and complicated. We are simultaneously at home and strangers within cities as they evolve. We are both fascinated by and fearful of the future city, these associations unarguably coloured by depictions on the big screen: the dark, sodden loneliness of Blade Runner, the violent streets of Taxi Driver, the decay in Escape from New York, the broken neon wonderland of Akira or the eerie futurism of Metropolis. Some of the greatest on-screen cities have been realised in the realm of anime, and this is the subject of Anime Architecture, the UK’s first ever exhibition of handmade background illustrations for celebrated Japanese sci-fi anime films. Opening tomorrow in London after its successful stint in Berlin, the exhibition will spotlight drawings and paintings from Ghost in the Shell (1995), Ghost in the Shell 2: Innocence (2008) and Patlabor: The Movie (1989), all directed by Mamoru Oshii.

Celluloid visions of future worlds have often reflected the politics and socio-economics of the time, and Oshii and his art team were no exception. Drawing heavily on the Asian megacity boom of the 90s and the fast paced destruction in parts of Tokyo and Hong Kong, they created the vividly contrasting worlds and nightmarish chaos of Ghost in the Shell and Innocence, cities that two decades later still resonate as a possible future.

The exhibition includes intricate pencil drawings by layout and concept designer Takashi Watabe and stunning watercolour paintings by art director Hiromasa Ogura, which demonstrate the painfully elaborate process by which anime films of this calibre are made. But don’t expect to see any of the characters – as the name suggests, the show is dedicated to the iconic backgrounds of the films, those towering high rise worlds which Oshii has described as “exotic”.

With Oshii’s work having gone on to influence other sci-fi filmmakers and writers – both Japanese and Western (like the Wachowskis) – and even architects themselves, exhibition curator Stefan Riekeles here reflects on the legendary director, his films, and legacy of their artwork. 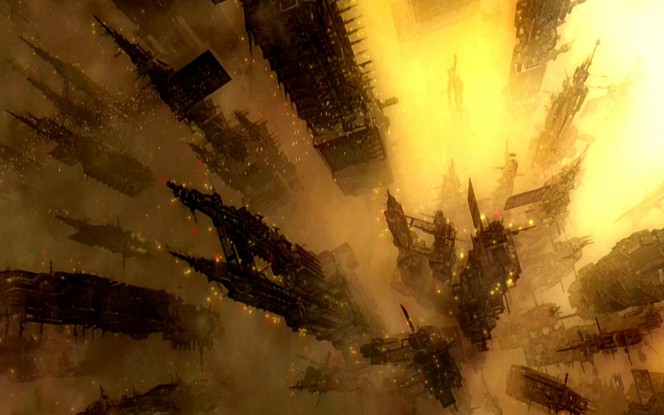 Taylor: How did your focus come to land on the background art of these films, and why choose to make an exhibition about them?
Stefan: There are three guys – Higami Haruhiku (location scout), Hiromasa Ogura (art director) and Takashi Watabe (layout and concept designer) – they’re part of the core team of Mamoru Oshii, they work on all his films, and we wanted to focus thematically on these backgrounds because that’s a very special moment in Oshii’s films, the way he used those backgrounds as world-making. It’s very hard to make an exhibition about characters. You can show some sketches but people have to know these stories or they won’t really understand it. So the way to present these movies in a museum is to go with the backgrounds, the stage design.

Taylor: When you began putting the show together, you were faced with going through boxes and boxes of artwork that hadn’t been stored or even archived properly. How long did it take for all this to come together?
Stefan: It took three years because we had to go back and forth between the idea that we wanted and what we could actually get our hands on. I was starting with a wish list of materials, then we found some but others were not available or we couldn’t clear the rights, so I had to go back and change the concept. The material was also stored in different places – the artists keep some and the studios keep some. It took a really long time. Each artist had kept large parts of the work they made at home or in their studios, but if they’d complied with the regulations they’d signed, they would have given all the material back to the production house and that means everything would be more or less lost. There’s so many films produced and the houses can’t keep all the drawings, so they basically throw the boxes away when time passes. It was lucky that we found these in the artists’ private collections, even though they weren’t legally there.

Taylor: That’s quite a marked difference to how an animation studio like Disney treats their work as heritage, why don’t Japanese studios not feel the same way about their art?
Stefan: That’s part of the other mission of the exhibition – that while Disney studios know what they produce belongs to the visual archive of the world, that every image was going to be influential, but there’s not this consciousness in Japan… the Japanese tend to regard their work as more valuable if someone from the outside says it’s good.

Taylor: The palette for the buildings in Ghost in the Shell, it now instantly recognisable – the very deep blue, purples and greys, and it feels remarkable how much this has helped cement the idea of what a “future city” looks like. What can you tell me about the artists’ ideas behind this?
Stefan: There’s two sections – the blue city is the future city, then there’s brownish green of the old city. Why blue? It’s a very philosophical topic. In the 90s, blue was future, it’s why you have all these blue LEDs in new electronic devices.

“I think there is beauty lost [in 3D films]. That’s why we do this exhibition… you can see colour dots and brushstrokes and that’s very fascinating.”

Taylor: There’s a sense that Oshii hated cities. His disregard can be heard in dialogue, particularly in Patlabor…
Stefan: Yeah, he has a very ambivalent love of big cities.

Taylor: Surely this is pure irony – a man (and his team) who went out of his way to make a cultural and political statement about the megacity has now been immortalised as the creator of the perfect anime megacity?
Stefan: I think that’s a question of historic perspective. It’s twenty years since Ghost in the Shell and I think the vision that he and his art department presented in is brutal, it’s not human. There’s a work called Tokyo Scanner, it was commissioned by a big real estate developer in Tokyo, they actually built [the kind of] city Oshii is talking about [in the film] in the Roppongi Hills. I think that’s the most ironic, where he understood his own position in this whole situation. Until that point he was criticising [the city] but then he was able to give a comment to them directly, since it was a promotional video for their activities in his style of critique and that closed the circle of films in a way. 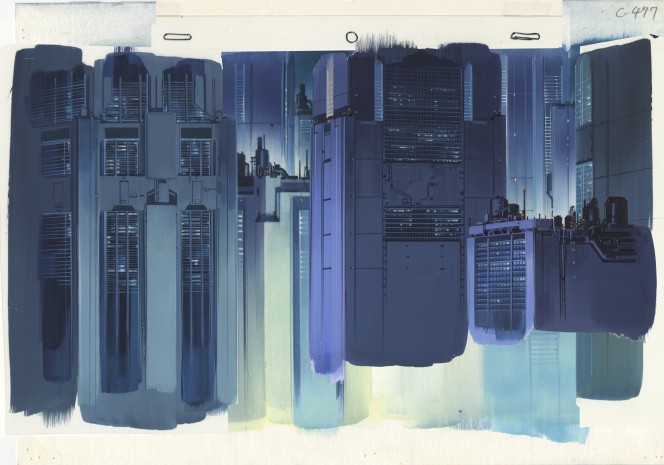 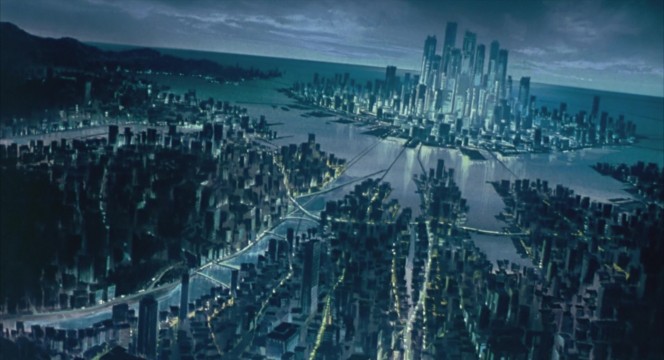 Taylor: What are your thoughts on the art direction for the live action version of Ghost in the Shell?
Stefan: I talked to the concept developers, they had ordered the exhibition’s book, and almost all the scenery in the anime you can find in the film. But they rebuilt it in a way and took out a large part of this flat blue, monolithic thing and concentrated more on the chaos of downtown ‘Tokyo’. There’s a lot of discussion about the complexity of the story that it’s been reduced, but actually I think it’s good because people finally now understand what it’s about. I don’t think many get the 1995 film, there’s too much to understand about networks, too much tech talk, it’s quite nerdy in a way. But in the live-action, it’s quite a classic hero journey made with Western models of storytelling, I think they did a good job.

Taylor: One of the pencil drawings, which is like a blueprint of a factory interior, the detail on that is staggering. How long would that take Takashi Watabe to draw?
Stefan: I don’t know for sure, but not long. It’s shocking how fast they work. That’s from Innocence, it’s A5, it’s not big, but he will do the whole set in one day, I think. The colour backgrounds you see in the exhibitions, they take one or one and a half days to complete one piece. But that’s just the colour. They are quick, but there’s many steps. These guys are old but still working because they can draw fast and they can change quickly, but things like 3D modelling, that takes time. 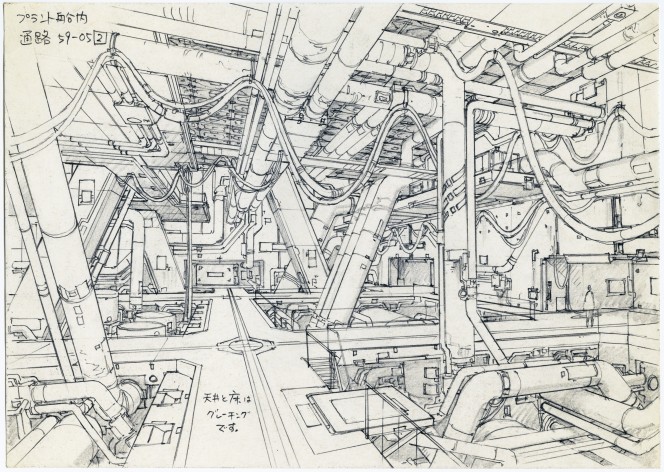 Taylor: In Innocence there’s a very obvious mix of computer generation and hand animation – some of it works and some doesn’t. What do you think gets lost in the shift towards animation being predominantly 3D?
Stefan: I think there is beauty lost. That’s why we do this exhibition, I am attracted to these hand painted backgrounds, you can see colour dots and brushstrokes and that’s very fascinating. I don’t know how to make an exhibition out of a 3D movie!

Taylor: Do you think layout and concept art teams aren’t appreciated enough – whether that’s by the anime community or critics, or general public?
Stefan: Everyone who goes to this show will love them a lot! But it’s just that it’s so difficult to present their works, in original form, there’s no system in Japan for these to be presented. And when we approached the artists, they said, “Why do you want to present this? It’s a movie, you can see it in the cinema, please go there.” [laughs] It took a long time to convince them. And there was some shame – Watanabe said, these are just sketches, that’s not beautiful, it’s not finished. That was part of the long process. But we wanted to see how it was made, we needed to see the process.