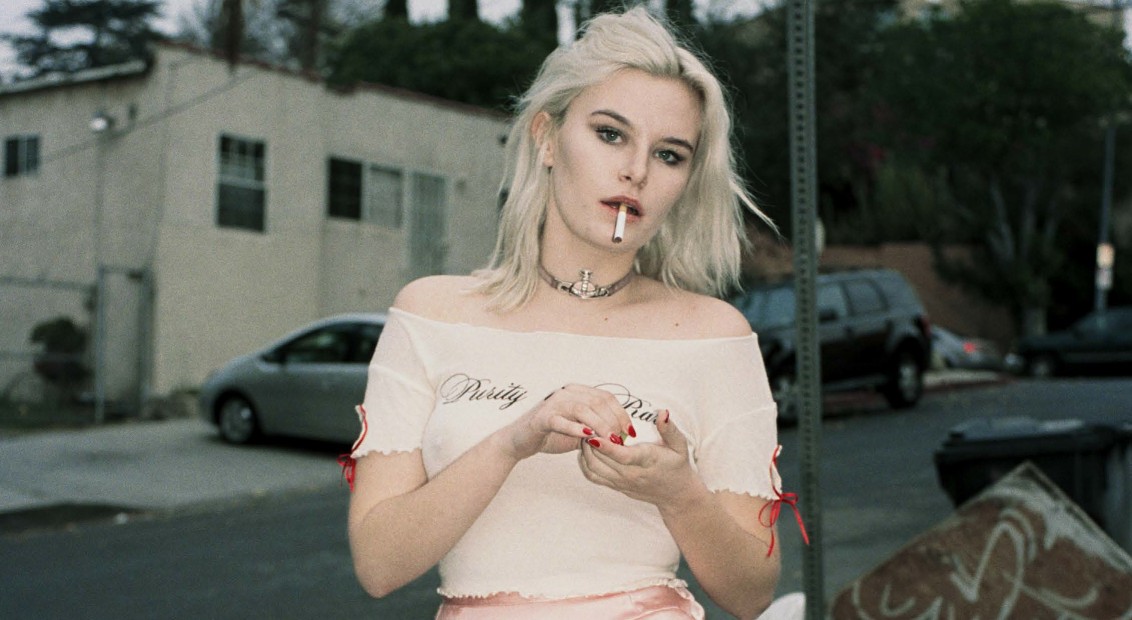 “My iPhone actually autocorrects my name to ‘Grave’,” says Grace McKagan, vocalist and mastermind behind LA five-piece The Pink Slips. When even computers are referring to you by your musical persona, you know you’re onto a winner. “Every time Grave performs on stage she sacrifices herself to the rock ‘n’ roll gods, that’s where all the blood comes from,” the musician enthuses. Perhaps not your standard daily routine for a nineteen-year-old, but McKagan has always been drawn to the theatrical. Think less Monroe, more Manson.

Having spent her formative years as an underage music geek lapping up the works of musical trailblazers and pop pioneers, McKagan’s own output is no half-hearted homage. Like a musical alchemist, she stirs and blends her idols’ tropes. Some gnashing guitars here. A few squelching synths there. And let’s finish it off with some ten-day-old, chewed up bubblegum pop hooks to finesse a recipe that’d have Kim Fowley whirling with delight.

For a band relatively new to the game, The Pink Slips already boast an impressive gigography, from playing at the Viper Room’s 21st birthday show, to two CBGB Festival appearances, and a slot at Download Festival. However McKagan reassures us that this is just the start. When you’ve got a blood-thirsty rock goddess alter-ego urging you forward, who’s going to stand in your way? 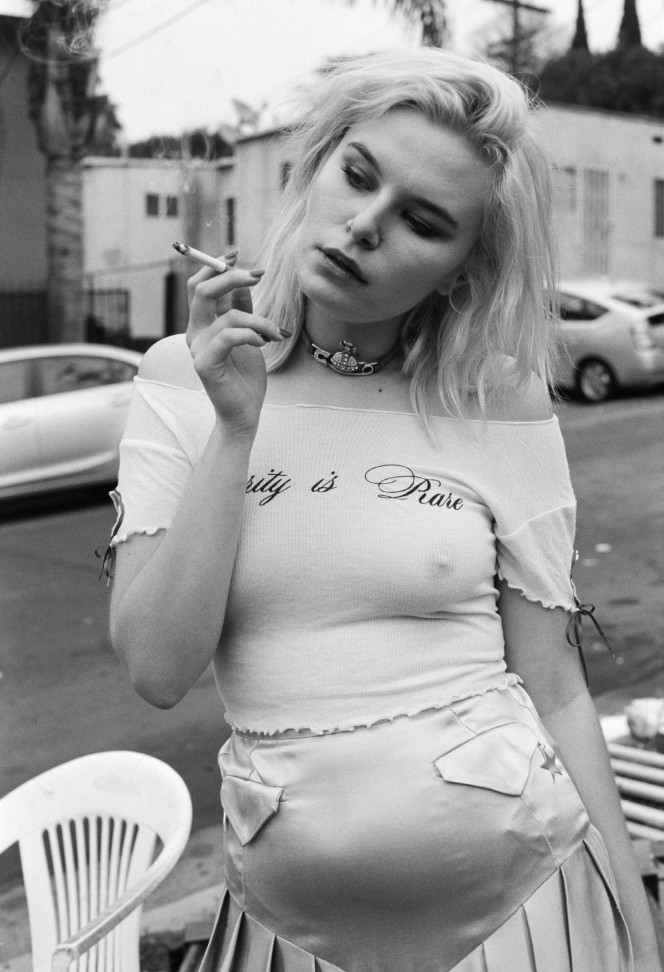 Alex James Taylor: You’re in Seattle now, right? That seems like a second home to you.
Grace McKagan: Yeah I was born in LA and live there, but my dad’s from Seattle so I visit here a lot, and I went to college here last year actually to study. I really love it.

Alex: There’s such a rich musical history there too.
Grace: Oh yeah. I had a lot of time on my own in Seattle when I was young because all my friends were back at home in LA, so I’d read a lot of books. I read Girls to the Front by Sara Marcus, which is a book about the girl punk scene in the 90s, like Bikini Kill and all that. I also read Kim Gordon’s Is It My Body? and a lot of Patti Smith and Iggy Pop biographies. They all made such a huge impression on me and helped me identify what I wanted to be, as a performer.

Alex: Has Seattle still got a tight music scene?
Grace: One of my favourite areas of music is the whole 90s grunge scene and that’s such a big part of Seattle, I love and totally respect that and it’s one of the reasons I wanted to go to school here. But at the minute I feel like there’re quite a lot of bands making soft indie rock music, where people stand there on stage and look at the floor. And that’s the type of music that makes me want to perform the most, because I’m like, “What’re you doing? I could just listen to your album, what’s the point in going to your show if you’re not going to perform for us?” So then I went back to LA and really focused on my music and what I wanted to achieve from it. There’s a really buzzing scene in Orange County right now.

Alex: LA has such a strong wave of new bands coming up, and everyone seems really supportive of each other.
Grace: Also, I feel like it’s getting revamped now with the next generation. There’s some cool punk stuff I’m really excited about.

Alex: From what I’ve seen on YouTube, your live show looks crazy. It seems like that’s when you are most confident, when you’re on stage performing.
Grace: Absolutely, that’s definitely when I’m most confident. It’s sort of therapeutic to let go of demons and pain, and even happiness, so I try to get my audience to do the same, I want them to feel completely free and just let go of any negativity and enjoy the music and the show. I really like Lady Gaga, she tells her audience that she wants them all to let go of their demons and just be free and go along with the music, I really respect her for that because I feel the same way.

Alex: When a performer is completely in the zone, the audience reflect that and respond.
Grace: That’s what makes a great show. Freddie Mercury was one of the greats, he would put on a beautiful show, even growing up and watching Scott Weiland from Velvet Revolver [McKagan’s dad was the guitarist in the band], I saw him perform from such a young age, I was like five. I remember watching him and it had such an effect on me because he was so authentic and really breathed rock ’n’ roll. That’s what’s inspiring for me, when people are just completely free.

Alex: Is there a particular gig you saw that really changed things for you?
Grace: I saw Charli XCX about two summers ago here in Seattle – I liked her album Sucker a lot and I’m working with Justin Raisen right now, who produced that album. When I saw her perform she came out and was just like, “Everybody put your middle fingers up in the air, let’s go!” And I thought it was so punk rock and cool, I think she does a really good job of balancing authentic old school with cool modern pop music. A lot of pop music is shit, for sure, but a lot is also cool – it’s called ‘pop’ for a reason, it’s what people like. I think Charli XCX does a good job of making catchy songs, but she’s also a badass performer.

Alex: There’s a really great new wave of female performers blurring the boundaries with pop and creating amazing, intelligent music, people like Lady Gaga, St Vincent, Sky Ferreira.
Grace: Yeah, I love all those people. In terms of performance, I think visuals and appearance are a huge part of it, but not in terms of wearing skimpy outfits or anything like that, more creating a theatrical spectacle. So that’s why I like to surprise people, I like to use a lot of fake blood, and keep people intrigued with visual elements. 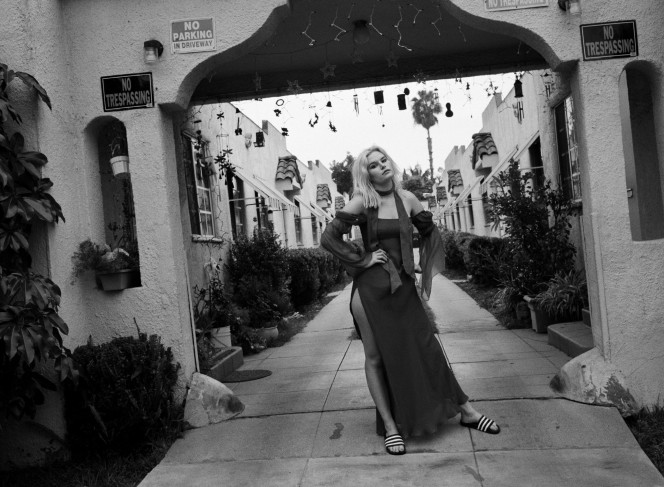 Dress by CLEOLA SS17; sandals from ADIDAS; scarf GRACE’S own

Alex: So tell me about your show – as you say, there’s a lot of blood involved.
Grace: I didn’t always use the blood, I started doing it about two years ago. I don’t know how I came up with the idea, I just thought it’d be fun for one show and then I just really enjoyed doing it and carried on using it. But I think people have started to expect it now, whereas before it was more of a shock. It’s all based on my character Grave. The story goes that she’s sacrificing herself to the rock ‘n’ roll gods on stage at the end of each show, that’s the concept behind it. Now, as I’ve got more comfortable with it, I’ve started to throw the blood on people, so that’s always fun… most people are fine with that [laughs].

Alex: Where did the idea of Grave come from?
Grace: In my senior year at high school we had to write a paper, and one of the topics was to examine Dr Jekyll and Mr Hyde, so I compared Jekyll and Hyde to David Bowie and Ziggy Stardust, and Elton John and his poetry. So I was researching Elton John, and one of my favourite songs of all time is Bennie and the Jets, I think it’s a great song. I was reading about it, and I had no idea that Bennie was first of all a girl, and secondly a girl who’s a rock goddess. I was like, “Damn, that’s so cool that Elton John did that. I totally respect that.” So Elton had a big part in me coming up with it, but also my iPhone actually autocorrects my name to ‘Grave’, and I think that’s pretty funny. One day it just clicked that I should turn Grave into a real life rock goddess, like Bennie.

Alex: I love it, I’m really into musicians having personas and creating characters. I remember when Lana Del Ray first appeared and she got a lot of criticism from the media because she’d created this character that wasn’t really her, which is crazy. So what? Musicians have always created personas.
Grace: Yeah, so true! I love Lana Del Rey. There’re so many performers who get scrutinised for that, like M.I.A. and Grimes.

Alex: Maybe the running theme here is that they are all female performers, perhaps the media is more critical of female musicians creating personas.
Grace: Maybe it’s because the media wants them to follow this old school blueprint of looking hot and saying nothing particularly interesting. I think a lot of musicians also create alter-egos to deflect criticism. So if people were to criticise your performance or your music, you can learn to not take it personally because it’s this character you’ve created, it doesn’t so much feel like they are directly attacking you. Like, Grave can definitely take any shit that comes her way, but maybe Grace can’t always deal with that. Grave is like this armour I put on, this aura I surround myself in when I’m in the zone performing. Performing is such a personal thing for me, I hold it very close to my heart and it was really therapeutic when I was in high school. I went to a Catholic high school that was all about sports, which wasn’t really my thing, and I think people didn’t understand what I wanted to do, so I got some shit for that. But it made me want to do it even more – I’m only nineteen and I’m still finding my place, but that made me really determined to follow this path. In certain situations I can be nervous in a small group of people, but then I remember that I’ve performed in front of all these people. If Grave can do it, so can I.