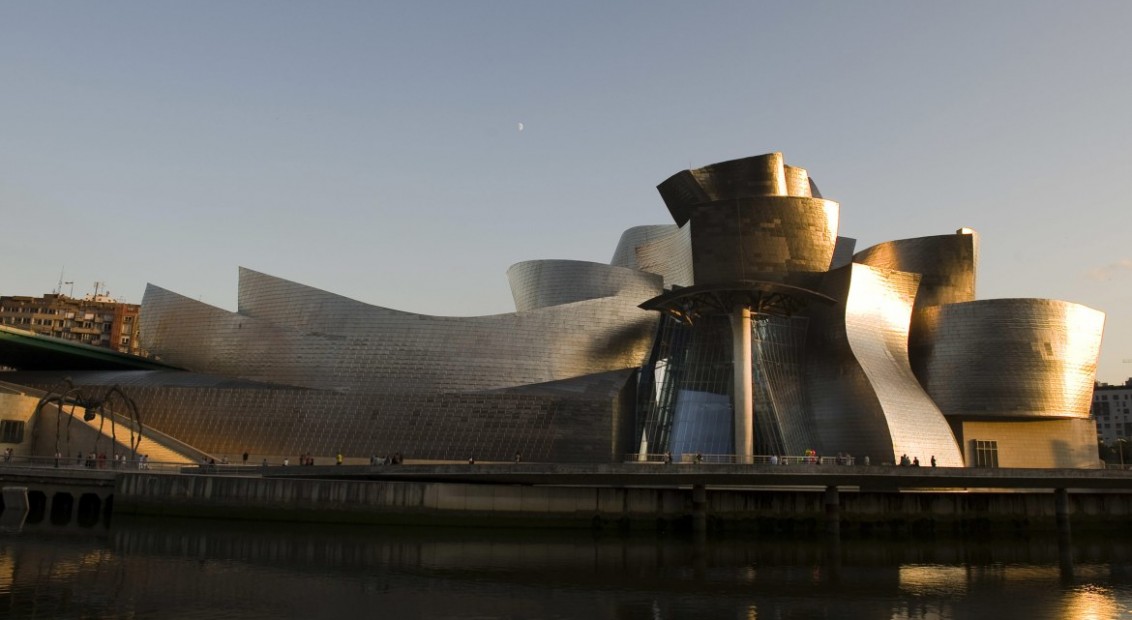 Since renowned architect Frank Gehry established his Los Angeles practice in 1962 he has honed his signature style, instantly recognisable by his ability to fragment and distort traditional notions of structure, form and volume whilst simultaneously capturing movement and light.

The story goes that as a child, Gehry used to accompany his grandmother to Toronto’s Jewish market to buy live carp. At home, the young Gehry would watch them swim about in the bathtub on their way to becoming gefilte fish, blissfully unaware of their Sabbath fate. Observing their shape and movement he became fascinated and fish have since been a recurring motif throughout his work.

Often defined under the deconstructionist movement (although Gehry himself rejects the label), the Canadian architect is perhaps best known for his curved, metallic shape-shifting buildings. Having first stunned the world by ripping up his own traditional Santa Monica house and reconstructing it into an avant-garde masterpiece, Gehry then translated this approach to some of the world’s most instantly recognisable buildings. As technologies advanced, so did the scale and intricacies of his works. This progress allowed Gehry’s agency to digitise the complex geometry of his forms, transforming his fairly abstract sketches into tangible digital designs (a relief for contractors and other agencies who often struggled to produce and work with his atypical forms).

Gehry turns 88 today – and shows no sign of slowing down: he is currently working on a project for the Los Angeles river. To celebrate his birthday, we look back at Gehry’s most influential works, tracing his career via his creations.

In Sidney Pollack’s 2006 documentary, Sketches, the filmmaker explores the life and work of the architect, concentrating specifically on his sketches and models. ““I don’t think they mean anything to anybody except to me. At the end of the project we wheel out these little drawings and they’re uncannily like the finished building,” says Gehry in the documentary.

These initial plans act as a basis for the dynamic structures and unpredictable interiors but they also highlight what Gehry is most infamous for: blurring the lines between art and architecture.

Dancing House
As with many of Gehry’s designs, it’s the stark individuality of the Dancing House that attracts attention. Located in Prague, Czech Republic, the building replicates the intertwining motion of two dancers (it is affectionately called “Fred and Ginger” by American architects) and took four years to complete.

Its unusual shape and non-traditional design was initially a great source of public debate. Prague is famous for Baroque, Gothic and Art Nouveau buildings and many argued that Gehry’s style did not cohere with the area’s aesthetic. However, the city has now benefited from the building’s presence, transforming it into a cultural tourist hotspot. Built out of glass and steel with double towers – one sturdy and cylindrical, the other narrowing and curving glass – the surreal design is one of architecture’s most iconic buildings. 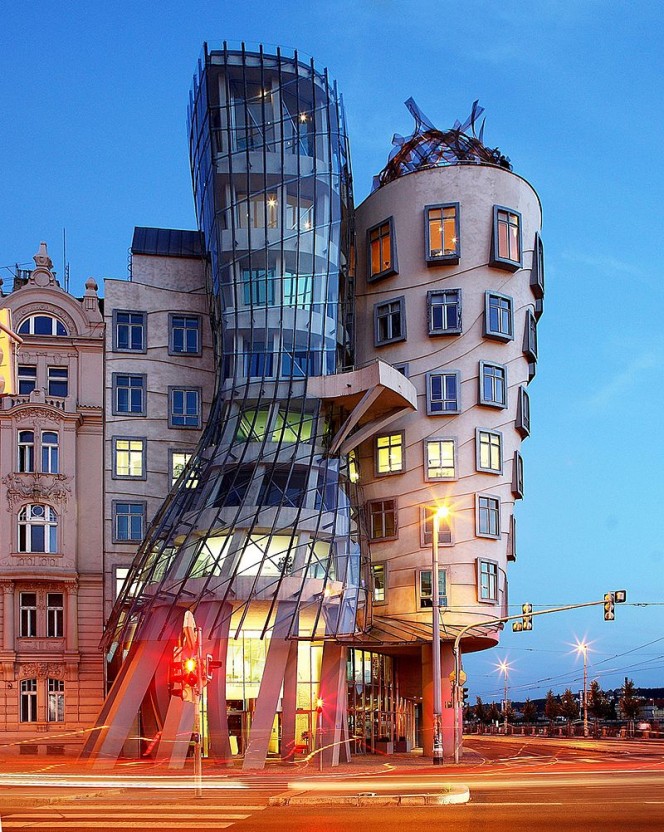 New York by Gehry
Towering a stomach-flipping 265 metres above the New York streets, Gehry’s 76-story residential skyscraper, New York by Gehry marked a new chapter in the architect’s oeuvre, his first residential commission in New York City and his opportunity to add to the city’s iconic skyline.

Described by The New York Times as “[epitomising] the skyline’s transformation from a symbol of American commerce to a display of individual wealth.” Gehry wanted to provide residents with a unique home. By moving the position of bay windows from floor to floor he created the building’s extraordinary rippling effect whilst gifting brave residents the opportunity to step out on glass platforms, floating above the city’s busy streets.

The cost of living in one of Gehry’s most remarkable creations? Around $3,438/month for a one bed apartment. Best get saving. 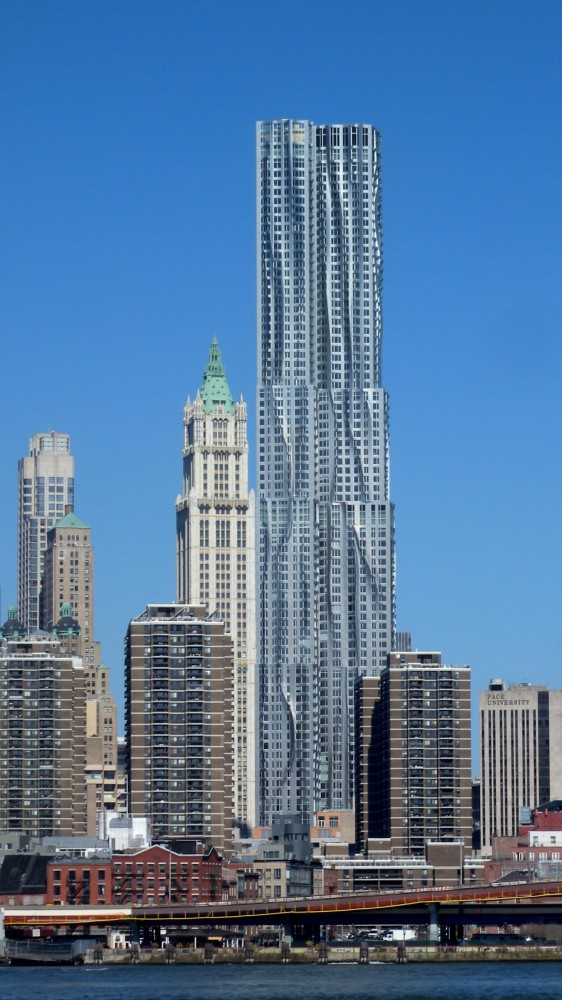 Guggenheim Museum Bilbao
Set on the bank of the Nervión River in Bilbao, Spain, the Guggenheim Museum is a perfect example of Gehry’s audacious sense of freedom when it comes to shape and structure. The masterpiece is a fusion of complex and swirling forms with a design so complex that it needed the help of top-of-the-range 3-D design software originally conceived for the aerospace industry.  The software digitizes points on the edges, surfaces, and intersections of Gehry’s hand-built models to construct on-screen models that can then be manipulated and moulded.

But what’s perhaps most impressive about this building is the astounding socio-economic impact the museum has had on Bilbao, so much so that it has been named “The Bilbao effect”. Almost four million tourists visited the museum in the first three years which generated about €500 million. Furthermore, the money visitors spent on hotels, restaurants, shops and transport collected over €100 million in taxes, which was more than enough to offset the cost of the building.

The iconic structure boasts more than a hundred exhibitions and has tallied up well over fifteen million visitors. It has also dramatically changed the way that architects and the public think about museums and twenty years on it continues to challenge expectations about the correlation between art and architecture. 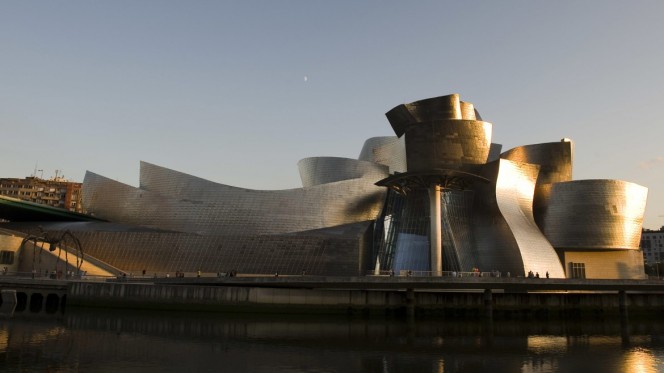 Walt Disney Concert Hall
Like the Guggenheim, the Walt Disney Concert Hall boasts large sweeping and swirling metallic surfaces that appear like vast sails, interlocking with each other; a trait now synonymous with Gehry’s signature style. Made of stainless steel and polished to shine “as bright as Disney’s mind,” the project was completed in October 2003 with an ethos largely orientated towards the benefit of the public, as much of the site is allocated to open gardens and other public spaces. 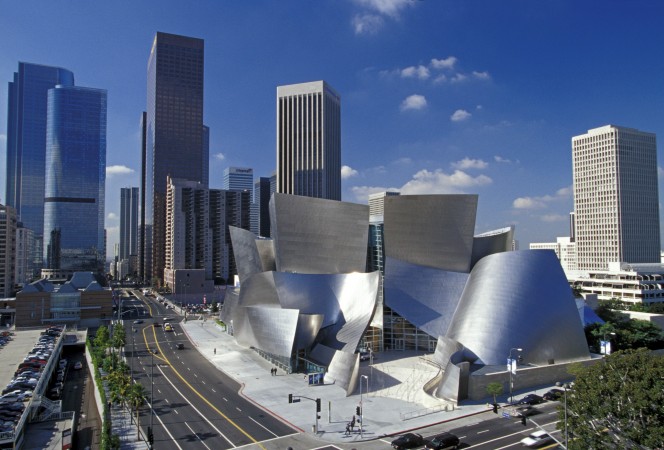 Created as a single volume, meaning that the orchestra and audience members occupy the same space – blurring lines between private and public spaces is a trait that runs throughout Gehry’s work, footed in accessibility and inclusiveness – the distinctive architecture has received praise from musicians for the excellent level of acoustics created. The acoustics were essential to the success of the concert hall and Gehry worked with his acoustical consultant, Yasuhisa Toyota to refine the hall’s sound.

The actualisation of this project was threatened several years into the project as a combination of political and managerial impediments actually led to the project being terminated in 1994. Thankfully, after a successful fundraising campaign, headed by the press, the project was restarted two years later. 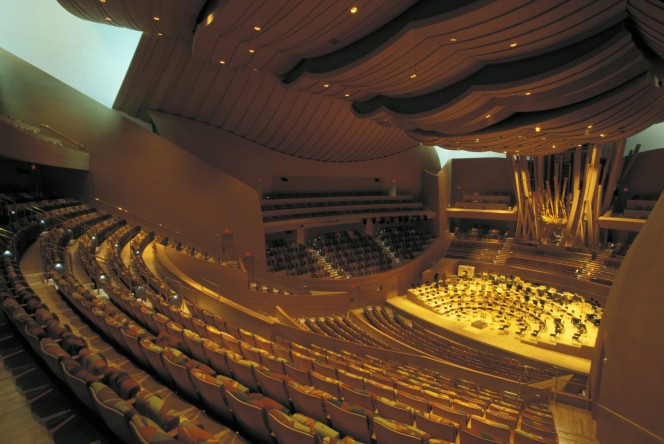 Fondation Louis Vuitton
Located in Jardin d’Acclimatation, a suburb of Paris, is the Fondation Louis Vuitton. This avalanche of glass sails teeters over the surrounding woodland and can be seen for miles around. It is made up of 3,600 glass panels that form twelve curved sails which twist and turn in Gehry’s trademark aesthetic. The glass structures are seen to be blooming in the wind as they reveal white curving walls, steel struts and wooden beams.

Eleven exhibition galleries coincide with a permanent collection of contemporary art, as well as temporary exhibitions and artists’ commissions. The centre also offers a 350-seat auditorium, meeting and events spaces, and education facilities.

As with many of Gehry’s building it provoked a lot of discussion and was successfully challenged by a local group that were dedicated to preserving the character of the park that the building sits on. The court ruled in the Fondation’s favour stating that it was in the international interest as it was “a major work of art for all the world.” 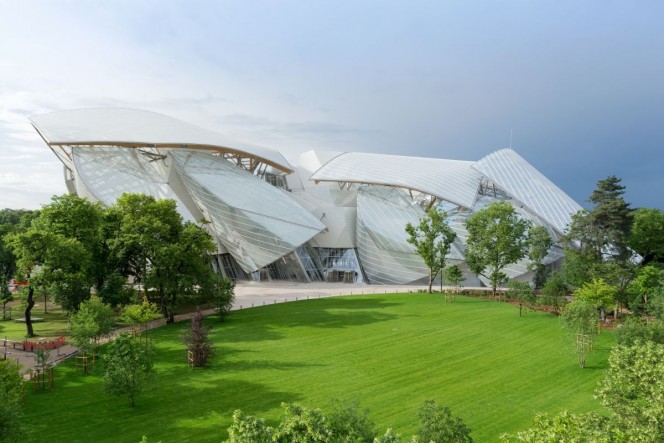 Gehry Residence
When Frank Gehry bought an existing house on 22nd Street in Santa Monica, the neighbours could not have been prepared for the transformation that would happen in the next few years. Gehry’s bold vision transformed the corner residence into a forerunner of the spirit of Deconstructivism.

This permanent residence is a collision of reconstructed and in-process aesthetics. Having bought an existing and very mundane two-story house Gehry then had much of its interior and went on to expand the structure by wrapping the original house in metal slipcover. Instead of knocking down the original structure, he built his new vision around it, juxtaposing new and old. This created a new set of spaces and gave Gehry the opportunity to unleash his abstract vision.

With the original house almost intact Gehry basically lifted back the skin to reveal the building as a series of layers. New forms can be seen breaking out and tilting away from the original in different colours and various materials.

The result of this freedom of expression is essentially cluttered but still retains a sense of minimalism. Gehry’s artistic intuition is most prominently displayed in his own house more so than his other works. This creative expression is a classic among California’s architecture. 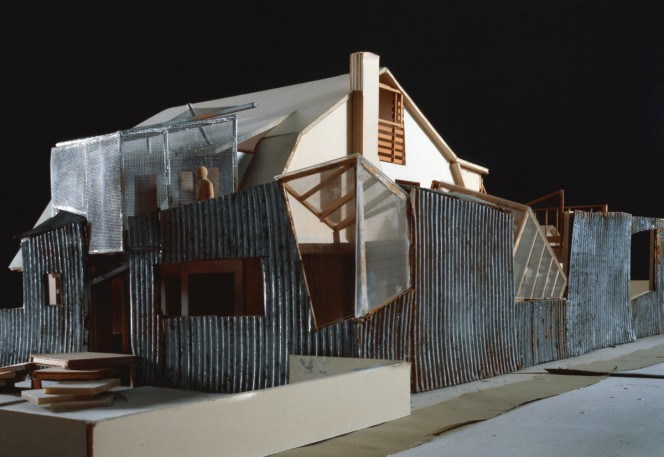