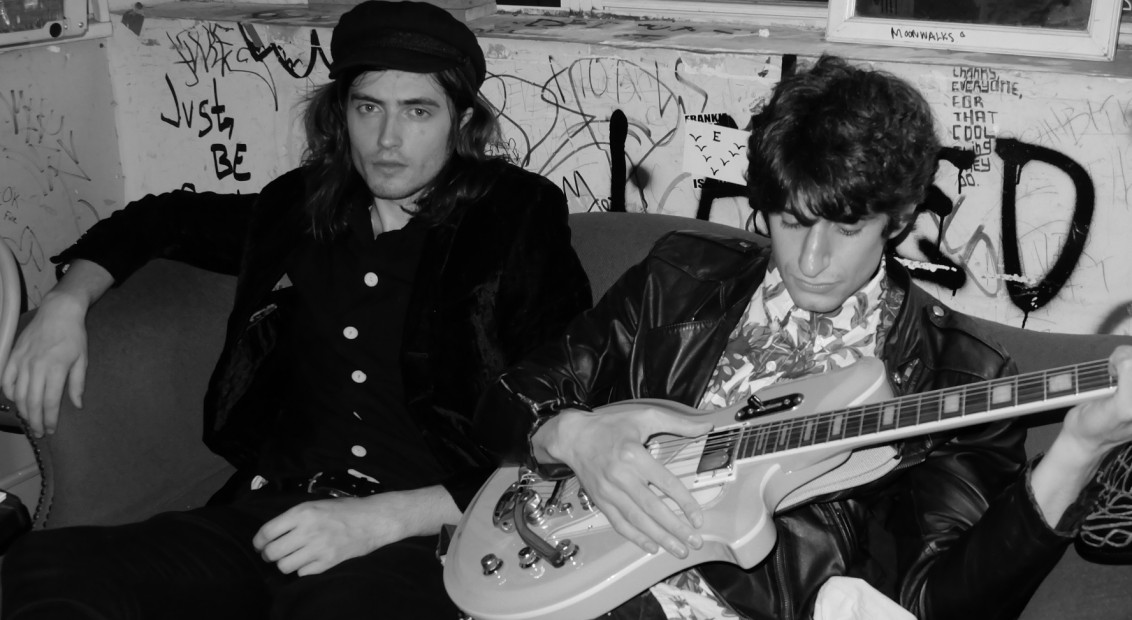 “I think we’re a global society now, despite the current politics. I think everyone is influenced by everyone, and in this digital era, we have access to everything,” says Spencer Draeger, founder of New York trio The Midnight Hollow. Constantly digging for new music, this instant access is key to Draeger’s creative feed – a mixing pot of influences filtered through his own experiences. And examples don’t get much more accurate than the band’s new track, Peach Juice, premiering here.

Having founded The Midnight Hollow as a solo project after leaving San Francisco for New York some years ago, what began with Draeger’s lyrics and arrangements soon turned into a fully-fledged band with the addition of drummer Andrew Segreti and bassist Matthew Leibowitz.

It was this visceral and unprompted collaboration of ideas that sparked the direction for their upcoming body of work. Along with the help of Ariel Pink’s guitarist and producer Jorge Elbrecht, the band’s aesthetic has become more streamlined, focussed and expansive. This new material follows on from their debut 2015 EP, and their For the People Inside EP only six months later.

The Midnight Hollow’s vivacious sound is attracting all the right attention and taking them all the right places, but for Draeger, the driving force is far more simplistic and pure: constantly questioning what it means to be creative. 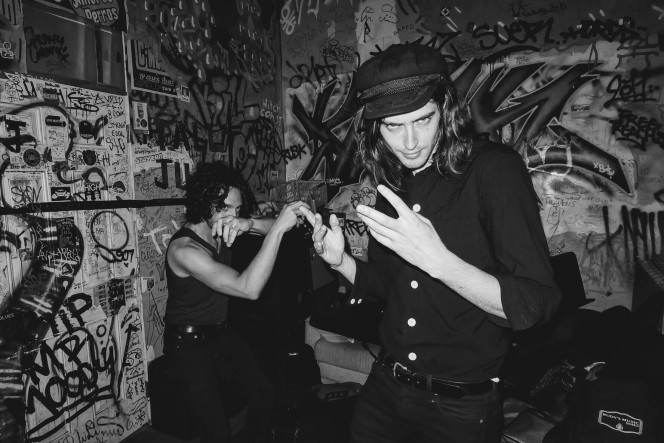 Clementine Zawadzki: Did you want to be a musician growing up?
Spencer Draeger: There’s no one that really played music in my family, but I’m just a big dreamer, and I would hear Smashing Pumpkins or something – that was my favourite band growing up – and I just always wanted to do that. I wasn’t very athletic or anything, and I just kind of found my place in music, I first started playing the keyboard and now I play tons of instruments. I have guitars and keyboards all throughout my room, on walls and everything.

Clementine: Do you feel the pressure to be doing a million different things now that you’re living in New York?
Spencer: Yeah, and I get a lot of anxiety even when I leave New York because I feel like I’m not actively working towards my goals. I just got back from Vermont late last night to get out of town. We’re in the middle of mixing an album that’s going to come out soon, and I got an email about a casting for something, and I do feel like I need to balance everything as much as I can. I make a lot of lists and write things down and try to be as organised as I can. It’s exhausting, but I kind of love the torture of it. I was in LA for a month in December, working on a solo project, and I love California and everything, but I need that stress to get me to complete things, otherwise I feel like you can just sink into things and time flies. It’s why I love New York, but also why I hate New York.

Clementine: So what’s the perfect creative environment for you?
Spencer: Distraction is a good segway. I like to be alone. I have a studio in Bushwick, which is about twenty minutes away from my house in Greenpoint, and over the years I’ve converted my room into a recording studio. The best environment for me is to wake up early, I make myself a coffee, I have to have my room perfectly clean before I go into songwriting, and I can’t have anything on the books for that day. I actually have special lights in my room that I turn on – it sounds really silly – but just to get in the mood. I have this weird star thing that puts stars on the ceiling, so it’s really mystical. Anything to trick my brain into thinking that I’m not in my bedroom in Brooklyn. Some days I’ll spend five hours and not get anywhere and feel like the worst musician in the world, and then other days I’ll spend like an hour and I’ll be like, “this is so easy.” It’s just an emotional rollercoaster and there’s no rhythm to it.

Clementine: What sparks an idea for you?
Spencer: When I first started playing in a band, I was just the singer. I didn’t play any instruments, I used to sit there and write lyrics all the time. Now that I write songs down to the drumbeats and bass, I’ve realised that the music usually comes first. I don’t know where the spark of a song comes from. Sometimes I’m working on a song and I write too many parts, and then I take the parts out and create a new song. That’s probably what happens the most. Actually, when I was in Vermont, my girlfriend’s friend told me about this app called Radiooooo and it’s like a radio station where you can go from the 1960s to the 1990s and you can choose a country anywhere in the world and listen to the music from that era. 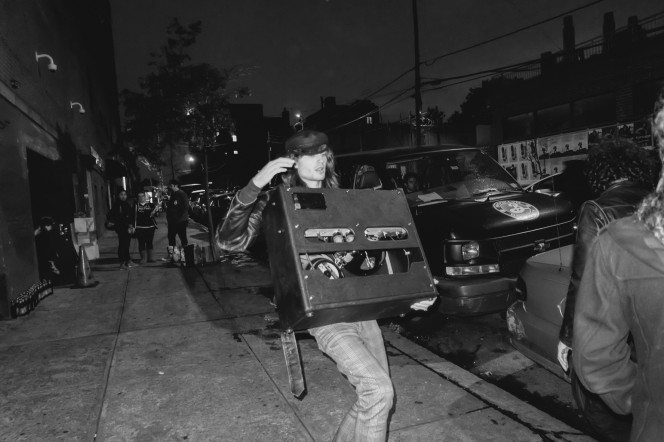 The Midnight Hollow by Georgia Mitropoulos

Clementine: That sounds so cool. What have you been listening to?
Spencer: A lot of West African music from the 70s and Polish music. It’s kind of hilarious. I hear things and then I start to get ideas. I think it subconsciously flows into me and I don’t realise it, but maybe I start making music that sounds like that. I naturally start to have that swagger from that music. It’s definitely something abstract and not very specific.

Clementine: I think that’s where apps really work, because as you say, it’s music that you may not have otherwise been exposed to…
Spencer: I think we’re a global society now, despite the current politics. I think everyone is influenced by everyone, and in this digital era, we have access to everything. It’s not like back in the 60s and 70s where people were trying to find that 7”, everyone has everything at their disposal. I think in some ways it devalues music, because people can just change the song when they don’t like something. But on the flip side, it’s also beautiful we get to experience music that’s been forgotten.

Clementine: Is that your mindset with this album you’re working on now?
Spencer: That’s actually an amazing question, because that’s something where I feel like an old dinosaur because I love making an album. When we play live there’s almost no silence in-between songs. We write songs specific to the live show to segway things. We’re all about having a whole experience. When it comes to the recording, that’s the same vibe I like to maintain as well. I think making an album is like your piece of work, like a vinyl feels like you completed something. We will be releasing singles like every month this year, but I will be pressing a 12” or something, because I think you need to have a completed thought and something that says ‘this was a piece of time in the band’s life.’ 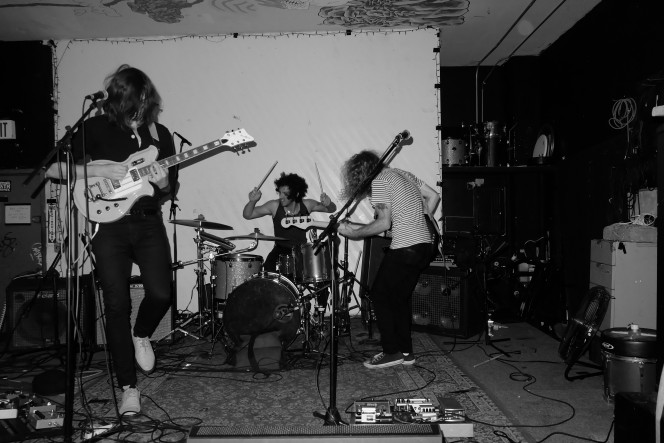 The Midnight Hollow by Georgia Mitropoulos

Clementine: What’s the next single you’ve got coming out?
Spencer: Peach Juice, a fast punk song. I felt compelled to write a song about the behaviour of a lot of men and the way they treat women in public. I was a bartender for a few years and I’d see the unwarranted attention towards women night after night and what they’d have to put up with all the time. It honestly takes balls to be a woman in the world, especially amongst all the dogs, and I just kind of wanted to make a song about it. It was one of the first songs written for the next album to come out this year. We also recorded it with Jorge Elbrecht of Ariel Pink, who are one of my favourite bands.

Clementine: How did working with Jorge Elbrecht come about?
Spencer: Working with Jorge came about through an old friend of mine, Sean. He has told me since the beginning of the band, “You gotta work with this guy Jorge Elbrecht, he fits so well with your sound.” Then when it came time to make the record I thought I’d try to see how it’d work to have a producer instead of me doing everything like the last two EPs. I actually forgot about Sean’s recommendation but then somehow after talking with multiple producers and managers, Jorge responded saying he was very interested. It wasn’t until we agreed to work together that I even realised it was my friend Sean’s old studio mate. Fate!

Clementine: It sounds that way. What influence did this have on your new songs?
Spencer: This was far more important than I realised at the time. Jorge turned out to be a real catalyst in moving The Midnight Hollow into a new direction and helping focus our sound.

Clementine: What was the process like?
Spencer: We tracked the drums and bass in New Jersey, very, very far away in a remote place I can’t remember. But the whole process was still actually very familiar and he gave me a lot of space to do things on my own after the drums were done. It wasn’t until the mixing that he really produced and tweaked things. We’d get dinner after tracking and he’d be like, “Guys pick a side, don’t try to be everything you love, just be a 100% of what you naturally do best.” The subtle statements like that really got me thinking. As the songwriter, I used to try and put everything I wrote into this band, and after working with Jorge I kind of felt like I should focus our sound. I still did the bulk of the tracking alone but I think overall it was good to get his outside perspective.