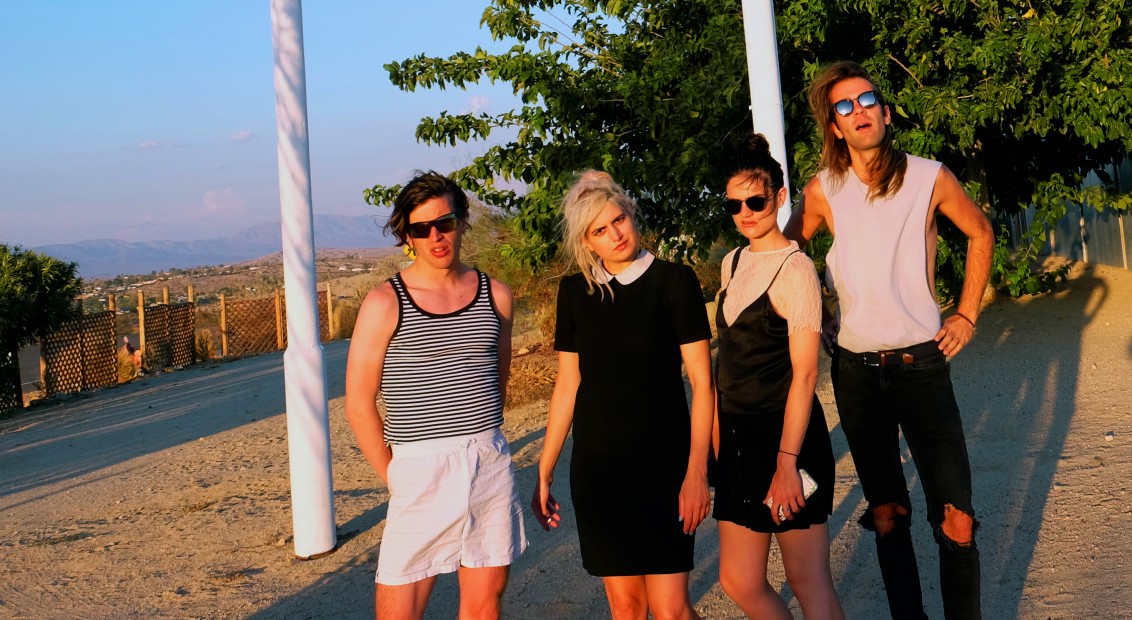 Meet the London band getting down with Hollywood sleaze

Running the gauntlet between no-fucks-given PJ Harvey-esque romp and ragged cranked-up pomp, London four-piece Tear are quickly making a name for themselves. Having found a second home on Hollywood’s starred streets, the band inject the iconic city’s vibrant personality into their output: a transatlantic amalgamation of west coast grunge and British DIY.

Their latest single release, The Sprawl – a 210 second barreling riot that is destined to soundtrack all future road trips – comes accompanied by a Hollywood-based video created with friend Juju Sorelli, owner of LA’s raddest boutique, The Evil Rock n’ Roll Cat. Set in the Hollywood Premiere motel (an oxymoron if ever there was one, the Tripadvisor reviews tell you all you need to know: “Run-down dirtbag hotel” and“Don’t stay here whatever you do”), the band present their sleazy ode to the City of Angels.

Camille Benett:
“We first met through a mutual friend who lived opposite Juju in Hollywood and kind of abandoned me in her apartment so I ended up spending all my time at Juju’s house. I started filming everything we did together and making these weird videos of us to Britney songs. Eventually Juju grew tired of being in front of the camera and, yearning for some more meaningful purpose started making films and rock ‘n’ roll clothes. I spent a summer when she first opened her store kind of helping out and generally being a musician in residence and she helped us make the video for our recent single The Sprawl. (ps. in the interview below, I’m Gordon.)”

Juju Sorelli: Hello Gordon, here are few questions that I think the public has a right to know the answers to. Gordon, I personally know that you love Hollywood. When can we expect an album recorded and dedicated to the most fabulous city in the world? Would you say that your time in Hollywood with the band was inspiring and you guys wrote a lot of stuff we will get to hear soon?
Camille Benett: We’ve got a mini album coming out at the beginning of next year and I reckon at least half the songs are about Hollywood. We’ve already started working on the next one, the first song is called City Of Summer which we wrote last time we were over, there’s maybe five songs already written for the next record, they’re probably all about LA.

JS: This is another question related to your album coming out, I would really appreciate if you did a cover of Suspicious Mind. Is that something me and the public could hear one day with a hi fi sound? I do have a recording of it from that neon karaoke place in Ktown.
CB: Wow, I forgot that time, that was great, is it with The Muse (artist and Elvis impersonator Dmitri Galitzine) singing as well? We don’t have plans at the moment for Suspicious Minds but we’re doing acoustic covers of Believe by Cher and Jack The Ripper by Nick Cave at our Halloween in-store this weekend. I’ll send you recordings so you don’t feel left out

JS: How do you get so crazy on stage and then get so GORDON Ramsey about managing the band and what you guys need? Do you think you need to have some kind of bipolar personality to do it all like you do? WHATS THE SECRET?
CB: I don’t know, maybe I do have a personality disorder I haven’t thought about it before but you know I just really like organising things, I love organising your life the most, maybe because there’s always drama going on. 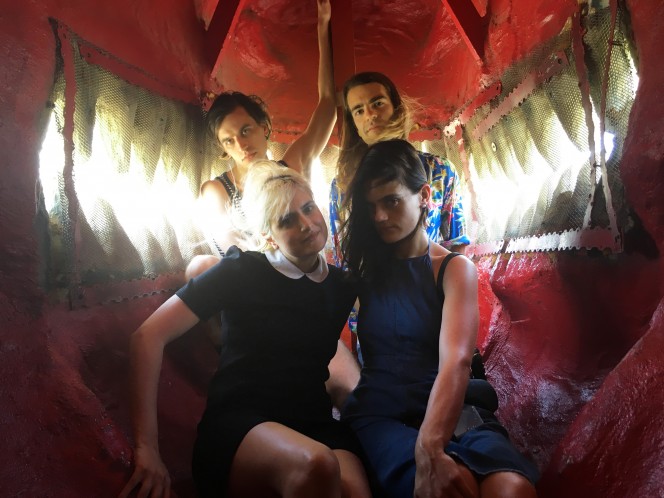 “I wrote it I was feeling that real stalker-y love that you get when you like someone and they don’t like you back and you think that actually… yeah maybe you’d break into their house and sleep in their bed just to be near them or whatever.”

JS: It’s the second time you asked me to film something for your music, are you a devoted fan of mine? Because I am all yours, Gordi. Would you use me as a collaborator if I wasn’t so hollywood focused and taking you to dumpy motels?
CB: You know I’m totally devoted, you’re the only person I’ve ever asked to make anything for any music that I’ve worked on, as I always shoot all our music videos myself and recently we’ve been getting tourists to take our band photos. It seems to be the best way to do band pictures since everything else just comes out embarrassing.

JS: What’s the best thing about being in band, Gordon? I was in a band once for about five minutes. I think that was a pretty good success.
CB: The music, man… or maybe having your own gang. I remember I once tried to teach you to play the guitar, during The Runaways exhibition at your store, you would sit on the Cherie Currie bed and play the Silvertone every day for like a week.

JS: I think the public would like to know what are your goals? Do you want to be like ZZ Top or are you just not caring about fame, money, drugs and just want to be an artist? I used to care about these things now I m just happy to be in Hollywood being me. A grand artist.
CB: I guess I’m just happy to be online being me. Also I just got my hair cut like Motley Crue, in a way like, ‘I’m in a band so I can have hair like Motley Crue.’

JS: As I only see you in Hollywood can you describe to me what’s going on in England with rock ‘n’ roll and who do you have to mingle with? What’s hot? Would you ever do a show like you did for the Brad Elterman gallery opening? It was fabulous, you standing there alone with no band and with half the strings of your guitar missing, screaming to the crowd going wild (I was the biggest supporter that night you will have to say that I gave my body and soul to that moment).
CB: I’m always trying to do shows where it’s just me, even though I love to be in a band I always really just want all the attention to be just for me. What can I say, I’m kind of lazy, I only like listening to the other bands that we play shows with – Beds in Parks, Average Sex, FVC, Spector, Yassassin

JS: Miss Mercy of the legendary Frank Zappa band The GTOs had a personal question for you. Why is it that you sing about a girl? Are you singing about you? She wants to know what that’s about. Also she would like you to NOT post on her Facebook page.
CB: If Miss Mercy wants to talk to me she can post on my Facebook page. But the song she’s talking about is called Beautiful and I think when I wrote it I was feeling that real stalker-y love that you get when you like someone and they don’t like you back and you think that actually… yeah maybe you’d break into their house and sleep in their bed just to be near them or whatever. So it’s just taking that a bit further and I put myself in the mind of one of those super fans that you see in a 90s crime show trying to shoot the beautiful actress all alone in her Hollywood home because they love her so much.

JS: Anyways, my final question is why on earth would anyone let me do an interview. This is outrageous. Can you tell me why? And maybe you can tell the public your top three favourite things about me and to go shop on my website. (Just a quick ad for myself, Gordi. Sorry not sorry.)
CB: My favourite things about you are you drive really fast, smoke all day long and hate everyone. 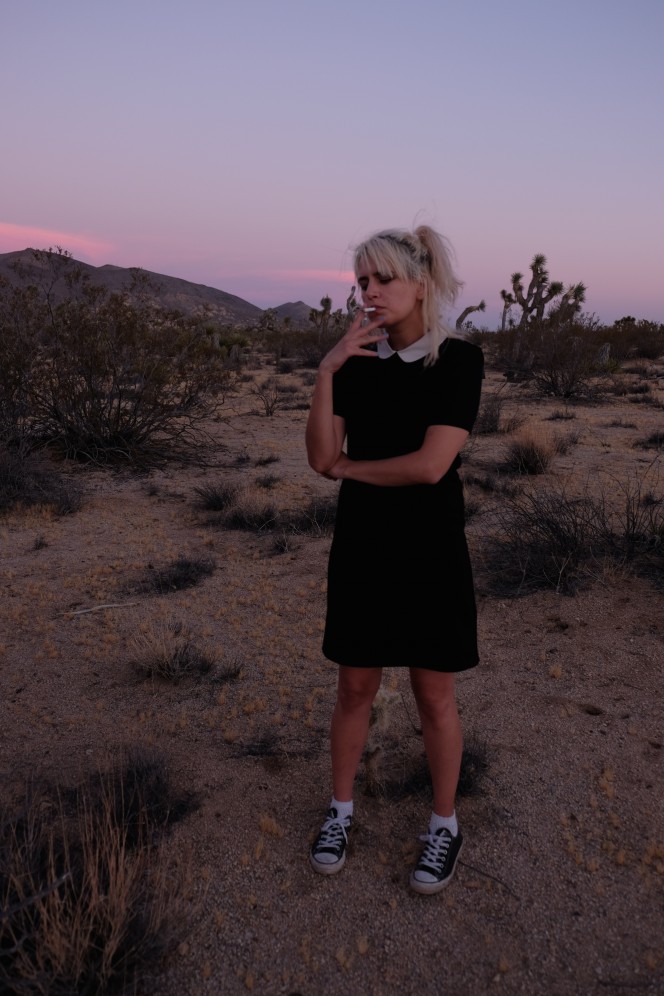