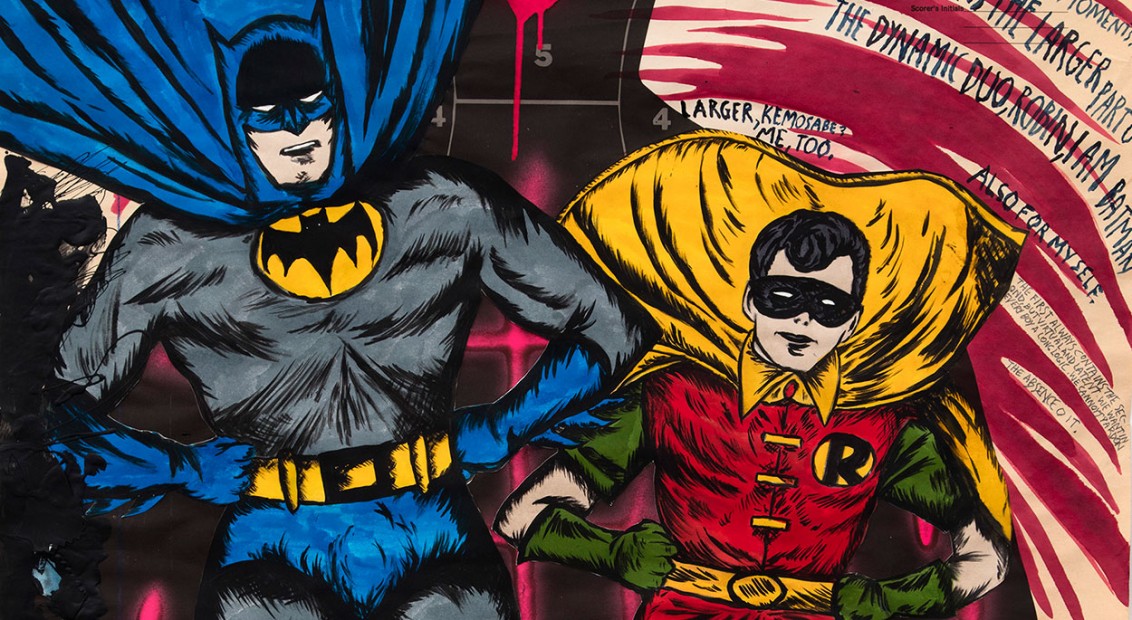 From alchemy and humour to mythology and the apocalypse, Marcel Dzama and Raymond Pettibon’s newest collaboration is the stuff of weird nightmares. Borrowing its name from Leonard Cohen’s 1956 poetry book, Let Us Compare Mythologies, the project spans a tightly curated zine, and large-scale drawings – all set to go on show at David Zwirner Gallery from next week.

Dzama here tells us he originally met Pettibon through the gallery, the pair having since embarked on numerous creative journeys together – the last of which was in 2015, when they staged a dual zine-exhibition project at David Zwirner New York, titled Forgetting the Hand. Now, to London.

Here they draw inspiration from America’s current tempestuous political situation as well as music – in particular, the legendary Neil Young and Leonard Cohen. From iconic films, modernist literature and Surrealist rebel Duchamp, the wide-ranging themes of the show are fused together to create a visceral response that is reflected in the artworks. Stand guard – viewing the work tends to trigger feelings and reactions from deep within the subconscious. 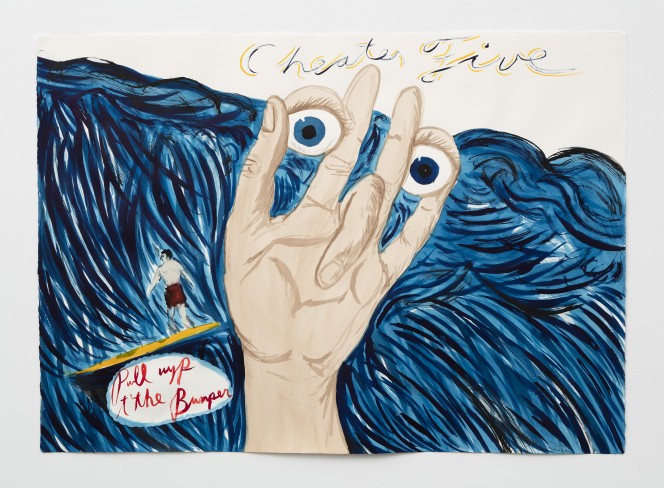 Ray Kinsella: So, how did the collaboration come about?
Marcel Dzama: We met through David Zwirner gallery, which we both joined in the late 1990s. We also both have four-year-old boys, so we would go out for dinner and draw together on menus, napkins, and tablecloths. Lucas Zwirner proposed we do a zine for Printed Matter’s New York Art Book Fair at MoMA PS1 in 2015. We did some drawings and after we filled up the pages, we just kept going. It was much more fun than drawing solo.

RK: What are the major sources of inspiration for the work?
MD: A lot of poetry such as Blake, Baudelaire, Lorca, & Rimbaud; and artists like Duchamp, Picabia, Beuys, Polke, Blumenfeld, and Goya to name a few.

“In the news then were all these police shootings of unarmed black men, not to mention the election news, the nightmare that is Trump, and all the racism and stupidity that comes in his wake. Very apocalyptic…”

I was working on a ballet earlier this year and was reading about Balanchine, Oskar Schlemmer, and the ballets Russes. So quite a few of the dancers in the drawings came out of that. We were listening to a lot of music, mainly Leonard Cohen, and also Neil Young’s two albums On the Beach and Tonight’s The Night. Those songs started the mood of the works. But the main initial influence was climate change. It was so hot in New York that it was breaking records at the time we began collaborating.

Also in the news then was all these police shootings of unarmed black men, not to mention the election news, the nightmare that is Trump, and all the racism and stupidity that comes in his wake.

Very apocalyptic, and that really shows up in the work. 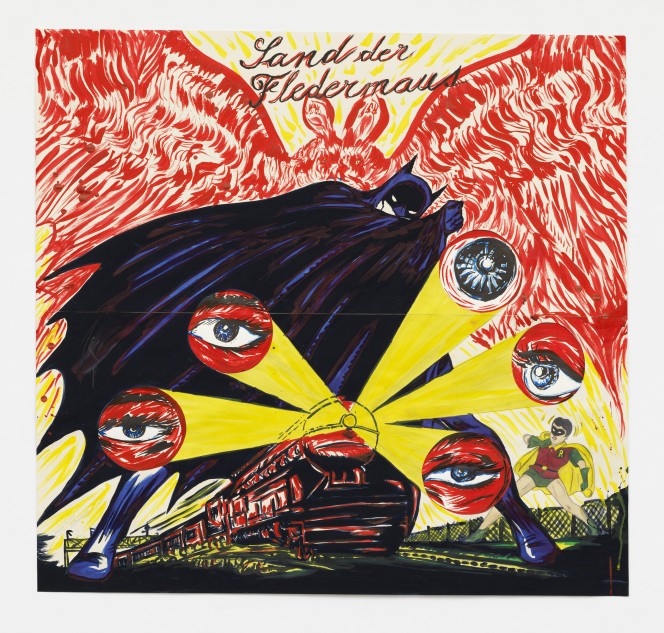 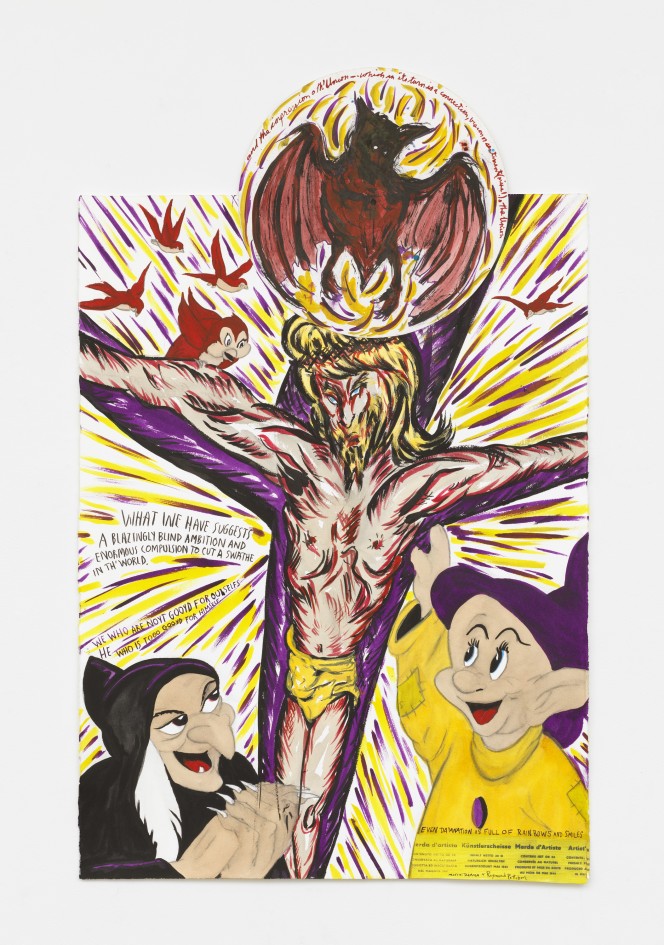 RK: What are the main themes of the exhibition?
MD: Alchemy, humor, disgust, mythology, and the apocalypse.

RK: And how about the significance of mythologies in the work?
MD: The title of the show came from a Leonard Cohen poem called Let Us Compare Mythologies. We were listening to a lot of Leonard Cohen, so I brought up that book to Raymond and we decided that it would make a perfect name for the show. It felt like we were mixing our two worlds and creating one with its own myths and trickster-like lessons.

“It felt like we were mixing our two worlds and creating one with its own myths and trickster-like lessons.”

RK: Batman seems to be a recurring motif in the work; can you tell us a bit about the importance of this?
MD: Raymond has been writing a script to a Batman film for over 25 years, which I had the pleasure of looking through and reading.

It would be really great to try to film it together. I’ve always had a liking to Batman especially the 1960s show, and both of our sons enjoy playing superheroes. I’ve also been drawing bats since grade school. 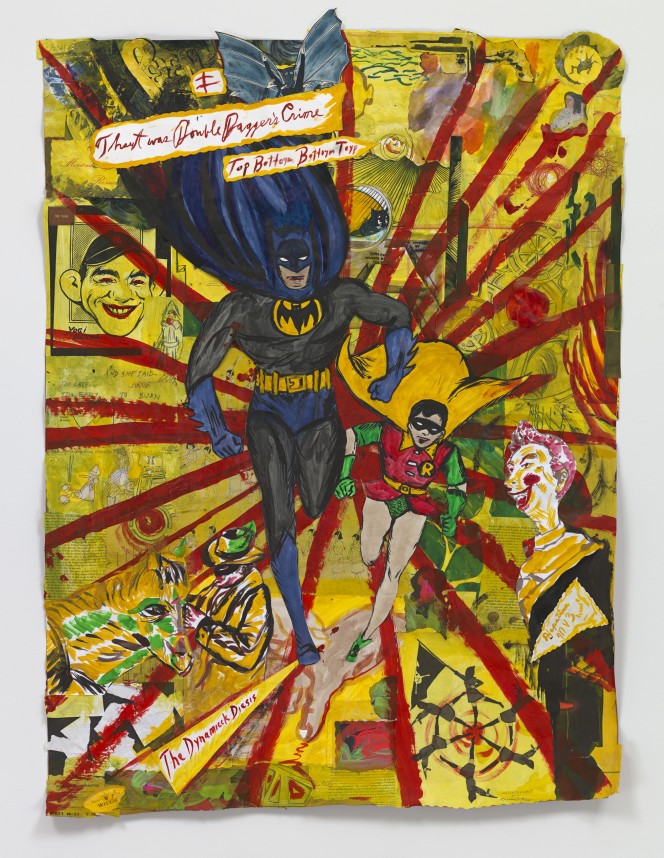 RK: Does the subconscious play an important role in the art?
MD: Yes, a lot of drawings started with having no idea what we were going to draw, and we would just let the drawing guide us to what the work became, with no plan.  A few of the early drawings were in the “exquisite corpse” style, where one of us would do half of the drawing and the other would finish it without looking at what the other had done.