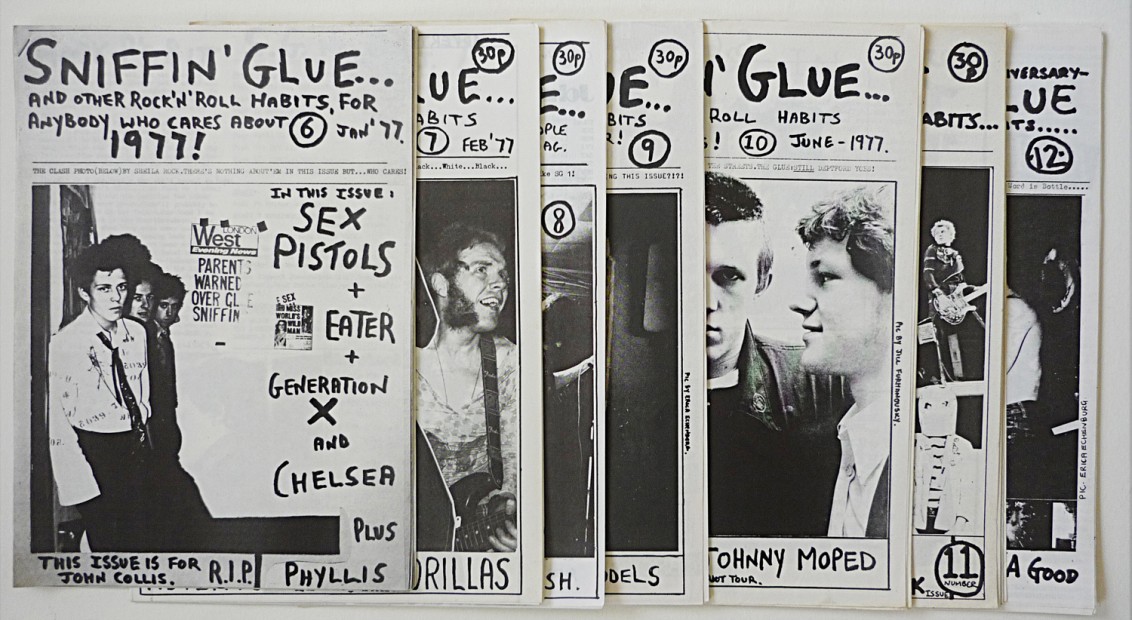 After seeing the Ramones at London’s Roundhouse on July 4th 1976, Mark Perry immediately knew he wanted to be a part of whatever scene these four floppy-haired New Yorkers subscribed to. A week later and with pen and paper in hand, Perry created Sniffin’ Glue (And Other Rock ‘n’ Roll Habits), a punk fanzine named after Ramones’ track Now I Wanna Sniff Some Glue.

With its handwritten title in thick black marker pen, the inaugural zine (with a print run of 50 – if you stumble across one of those rarities, cherish it) led to thirteen further issues and would become a defining recorder of the punk DIY scene. Through an original and organic aesthetic consisting of photocopied images, mistakes and doodles, Sniffin’ Glue emerged as an immediate mouthpiece for this nascent music scene whilst also kickstarting a new generation of independent publishing names.

In light of his recent ICA talk – and performance with his band Alternative TV – we caught up with Perry to discuss the origins of Sniffin’ Glue and the evolution of independent publishing. 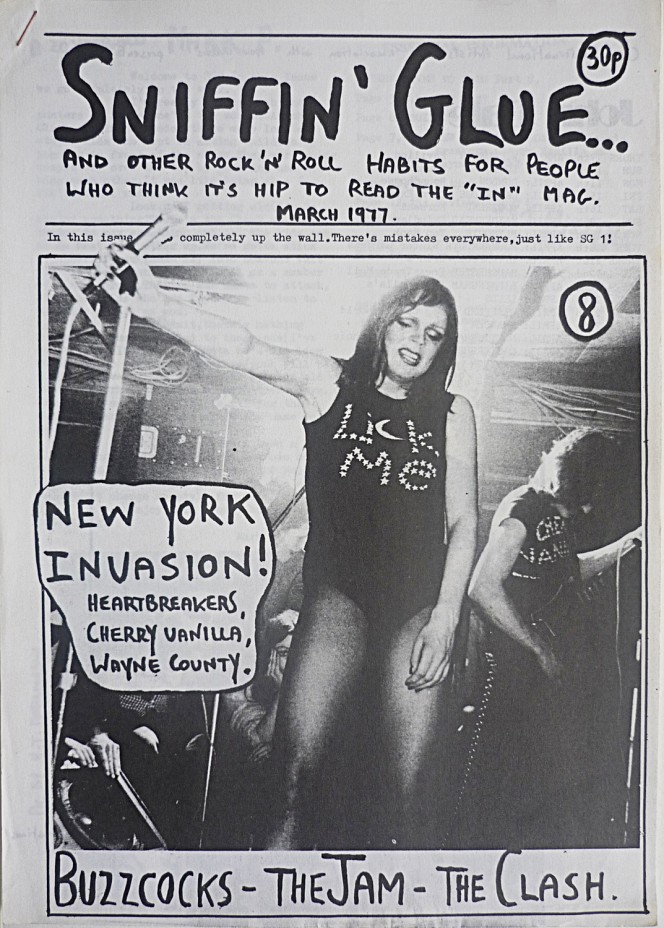 Alex James Taylor: Take us back to when you first set up Sniffin’ Glue, what made you start it?
Mark Perry: I was a big music fan at the time and when the Ramones came along, that’s what really changed everything for me. I was only nineteen at the time and it all just seemed really exciting. Obviously they were part of this new punk movement that was initially coming out of New York along with bands like Television and Patti Smith, that whole scene just captured my attention. I saw Ramones play at the Roundhouse in July ’76 and I was so excited by it that I wanted to get involved in it somehow and I wasn’t a musician but I’d seen some fanzines before – not about punk but about other things – and that’s what I decided to do. So I put out the first issue because of that.

AJT: What did the first issue look like?
MP: Well it was very basic, [laughs] it was only about six pages long. But it was mostly about the Ramones and there was also an article on Blue Oyster Cult. That was very early, in July ’76, punk hadn’t really evolved then, I hardly new about the Sex Pistols or anything like that, I mean The Clash weren’t even formed. So the first issue was basically about the Ramones and Blue Oyster Cult, plus I had some reviews of people like Iggy Pop. I was friends with this guy who ran a record store in Soho called Rock On Records and they took some to sell and sold out within a week or something and then asked me to do more. That’s how it got going.

AJT: Was it at all a kick back at the established magazines at the time such as NME and Sounds?
The music papers at the time were pretty good, NME, Melody Maker and Sounds, they were good magazines but because the journalists were older they weren’t really talking about new music, you know? So with Sniffin’ Glue we felt like the voice of the street because we were nearer the age of the people in the groups, so our point of view was that we were more authentic. 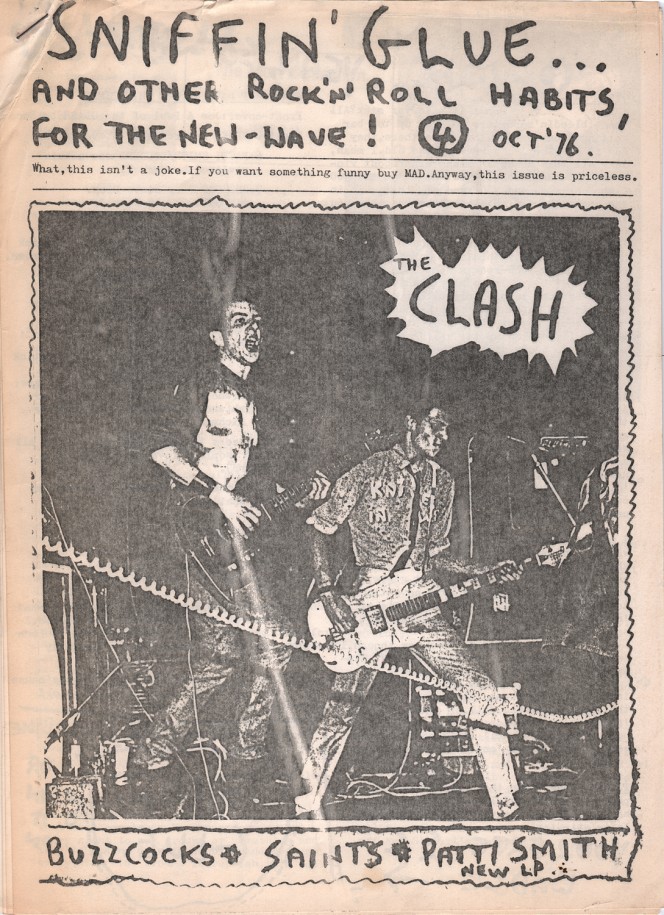 AJT: Sure, were there a lot of people who wanted to contribute to Sniffin’ Glue and be part of it?
MP: The only people who actually helped me on the magazine were friends, I mean, initially I had a school mate called Steve Micalef and then Danny Baker, who I went to school with too, he helped. As we got more famous and the magazine was featured in NME and Sounds, we had lots of people asking if they could write for the magazine, but what I used to tell them was, “No, go out and start your own fanzine,” which is what happened. After Sniffin’ Glue – in around six months – there were hundreds of different zines. So that’s what I’d encourage people to do, for example the second UK punk fanzine was called Ripped & Torn and was written by a bloke called Tony from Glasgow and he said that he initially asked to write for Sniffin’ Glue but I told him to go start his own magazine, and he did.

AJT: And that DIY, ‘anyone can do it’ approach was the blueprint of punk. You must feel proud looking back and knowing you influenced a whole scene of independent publishing.
MP: At the time when you’re involved in something like that you don’t really realise, I didn’t think that in 40 years time I’d be talking about it still [laughs]. I just thought it’d be over in a year or something, looking back I’m very proud that I had the idea but I was just in the right place at the right time and punk rock was so exciting that I just wanted to get involved so much, that was my aim. I wasn’t content with just being in the audience, I wanted to give it a go.

AJT: Do you still own the past issues?
MP: No, I don’t own one issue [laughs]. A few years ago we did this book that collected them all together and I’ve got a copy of that so I can quickly grab it if I need to look anything up. If I owned them I’d probably sell them, you know what I mean? Because they sell for a lot of money now.

AJT: I bet your teenage self would laugh at how much they’re worth now.
MP: I did an event a month ago at the Barbican and there they had the issues in glass cases, and they are in the British Library, and someone said to me that I must think it’s awful, but I don’t, I actually think it’s a good thing. The fact it’s become part of British cultural history and it’s in a museum, I think it’s pretty cool.