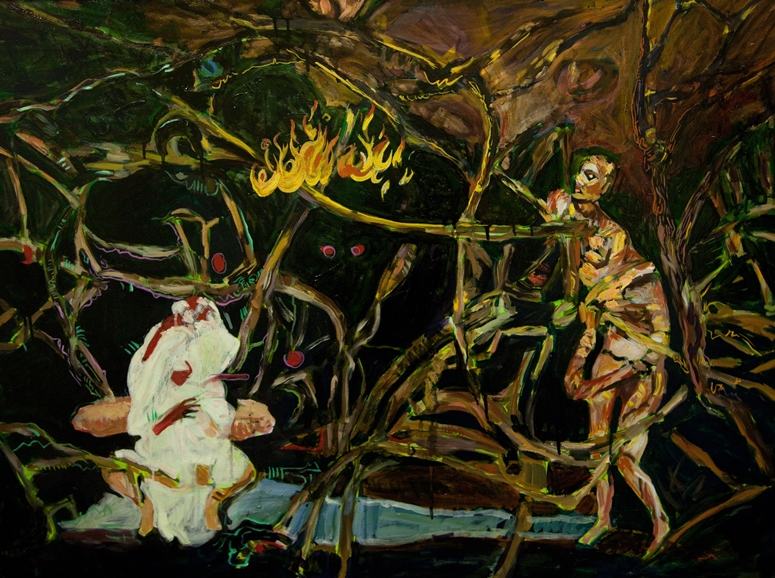 Artist Dean Melbourne explores the realms of fantasy and mythology for his latest exhibition, This Myth

Journeying through the human psyche and exploring one’s individual interpretation of mythologies and legends is the premise behind artist Dean Melbourne’s second solo exhibition, This Myth. Like previous work, the artist explores the realms of fantasy, nature and the human body helping to form a sharp narrative from imagination to canvas.

With inspiration drawn from Ovid’s Metamorphosis and Brian Catling’s sci-fi/fantasy The Vorrh, This Myth combines elements of both nature and darkness to create a highly individual concept. With Anglo-Saxon folklore, Greek fables, Norse mythology, and science-fiction fantasy novels and films as springboards, Melbourne creates anew, capturing a hybrid of myth and legend woven in his own sub/conscious. 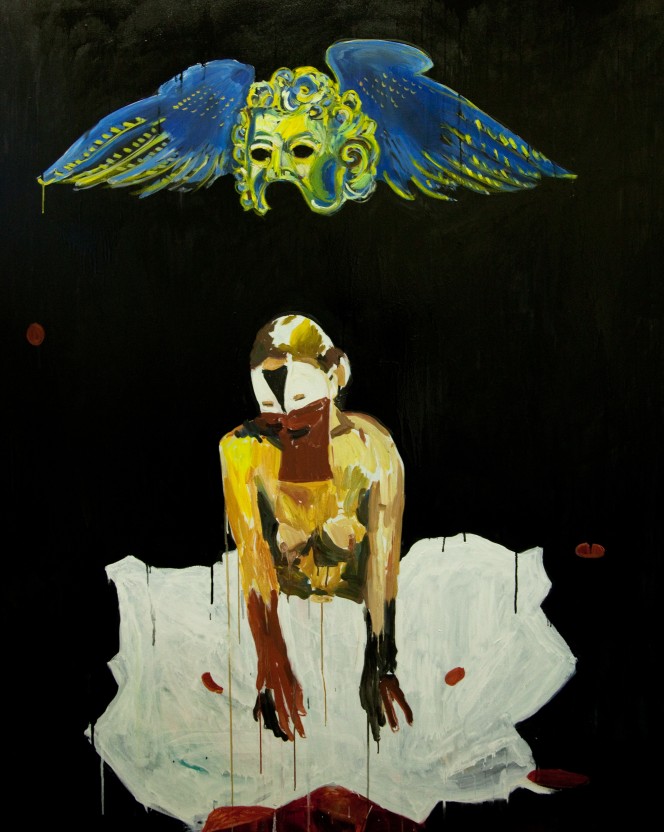 Sam Kavanagh: What is your process of developing a concept for your exhibitions and work?
Dean Melbourne: A loose concept usually comes from where I am with reading at the time and then I start to build up a visual legend of signs and signifiers. For this show I have made a big change. I have made the leap from using appropriated images to orchestrating my own. I had a notion about developing my own characters and a visual angle that I thought about as Botticelli meets Francis Bacon.

I built a small set, dressed it and started working with models to create my own images to take on into paintings. This has been a huge learning curve for me and threw up many unforeseen problems and surprise results. I feel that I have only just scratched the surface of this mode of working. 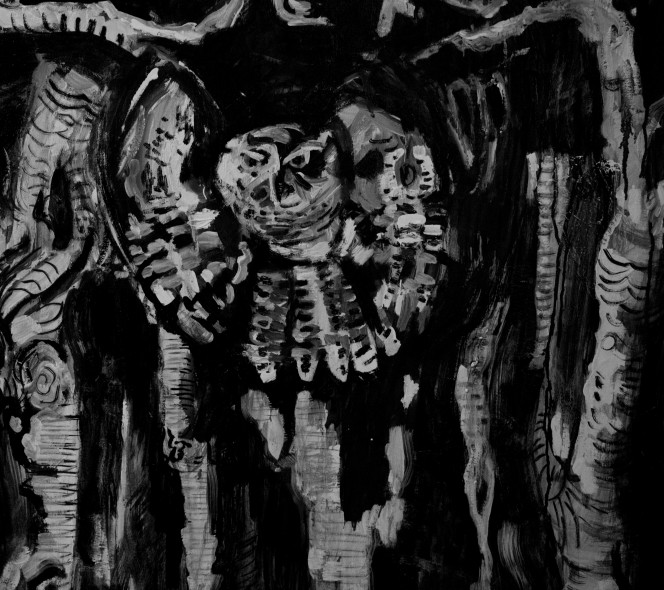 Dean Melbourne Self Portrait as a Hawk

SK: Have there been any stories in particular that have acted as inspiration for This Myth?
DM: Ted Hughes’ Script for Ovid’s Metamorphosis was really important at the start of the project along with Brian Catling’s sci-fi/fantasy The Vorrh. I was also reading Seamus Heaney’s Beowulf through the later stages of the project and I think that coloured things for me.

SK: Not only is it the visuals which form the narrative in your work, it’s also the names you give to your individual pieces.
DM: I am still finding my way with titles. Some are in place almost before the painting is begun, others I struggle with right up to the time of the show. For my last solo exhibition I painted a series about animal perception and filthy fairies that I titled with lyrics from songs by The Eagles; an association with childhood memories and the place that I grew up and found magic.

SK: Having seen your previous work, there seems to be a darker tone to this exhibition than, for example, your first solo exhibition Garland, which seemed to be lighter not only in palette, but concept too. How has it transitioned?
DM: I think the light and dark of my work reflects my mental state. I fluctuate between a lighter and darker aesthetic. Probably opposite to what you may think, the last show was light in palette but for me more sinister in content. I was going through something quite mentally difficult at the time. I found it comforting to submerge into the safe place of a hyper femininity. While making this show I have been going through a process of psychotherapy and experiencing acute bouts of anxiety. These two things have definitely influenced the tone of the work. As I have grown stronger mentally I am able to enjoy the darkness more.

SK: This Myth is described as revealing  “the animalistic side of human nature to bring our most hidden desires to the forefront.” Can you elaborate on this?
DM: Yes sure. This for me is a key thread and I think will be my main area of future exploration. I am interested in the way our desires, fears and bodies often don’t conform to the rules of civilized society.

I am avoiding tackling this in a direct way for now. It would be easy to make paintings of people fucking, fighting or puking to make the physical point but it’s not just that. It’s also about our psychology and the way that despite being more informed scientifically of our place in the scheme of things, we seem to increasingly be unable to cope with the implications of that knowledge.

We remain animal, we remain habitual and superstitious and we find ourselves most when we are at the extremes of pleasure, pain, fear and joy. I suppose I am suggesting that we might enjoy that side of ourselves more often. 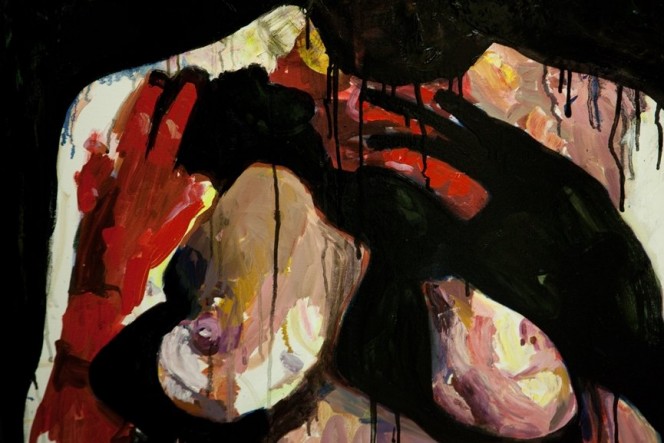 SK: Generally nature plays a big part in your work, what is it about the outdoors that captures you?
DM: Often the nature that I’m inspired by isn’t big and monumental. It’s a canal towpath or suburban gardens or the pretty standard countryside that I cycle through. What I find in it though is high drama and poetry, a sense that everything that you need to know about life is in a hedgerow, common or garden birds, blackbirds, starlings, wood pigeon, gulls are still magical to me. Nature seems to reflect my internal landscape. There are incredible stories and messages in even the dullest garden.

SK: Your studio is based in your hometown of Stourbridge, do you feel that this has an impact on the work that you produce?
DM: Yes for sure. It’s really hard for me to analyse just how it does but I know it must. I have lots of internal tapes about what it means to be from and work from here. About class and status and what people perceive about it. I was lucky enough to be mentored briefly by painter Dominic Shepherd who paints in the woods in Dorset. He said to channel the idea that I was the ‘last romantic”, seeing magic that has become invisible to others. I liked that idea. I am proud of the place and what it gives me.

SK: There seems to be a lack of recognition for painters today or just artists in general who aren’t recognised on their skill and talent. How important is it for you, as you were once an art interpreter, that the public recognise and appreciate different types of art and artists?
DM: My perspective is probably different due to not being in a major capital. For me there is an issue about only perceived skill being valued as good art by the wider public. Still hung up on this notion that painting or drawing that looks like the “thing” is proof of more value especially by young people.

I see the way my daughter’s primary education is going and I get very concerned about the archaic way that the arts are treated. There is no reason why we should not be developing culturally literate youngsters to engage with all forms of art and design. It’s really not that complicated to do. Then as adults, at least there is only choice as a deciding factor rather than hang ups about understanding or the arts not being “for people like me”.

As for artists being recognised enough? I am an artist in some way because I need to be seen, to have my voice heard, so of course it’s silly to say that I don’t want to be recognised, but in the cold light of day I think that I would rather nurses and teachers be given more recognition.