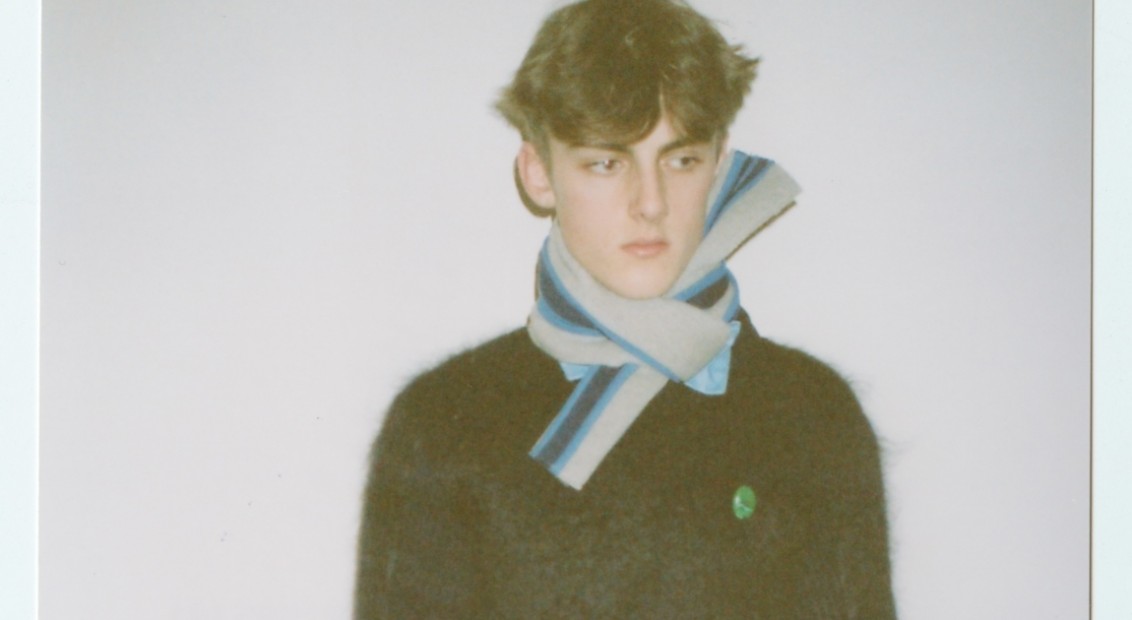 Last month newcomer designer Daniel W. Fletcher released his first capsule collection, through Opening Ceremony, for SS16. An extension from his graduate work, which showed last summer, it was a significant achievement for this very recent BA fashion graduate.

Cue this month’s presentation of his FW16 collection, marking the designer’s full debut. Here Fletcher anchored his creativity with 90s nostalgia, hooking onto notions of the schoolboy. Shirts cut from silk reminiscent of ties, Dr. Martens’ employed on the feet (a reminder of the heavy black school shoes we used to wear). Political statements took form via suede-leather ‘RENT’ snapbacks and ‘Save Our NHS’ slogan cotton trousers, cut like medical scrubs.

Coherence is key and depth comes easily for Fletcher: last season his political focus was on Peckham’s gentrification spearheaded by our current government. Meanwhile, looks have been calculated and crafted with holistic consideration and accessories are fundamental in the concept – as opposed to being an after-thought. Leather ‘book bags’ are embellished with graffiti-like scratches in Tipp-Ex by illustrator Matty Bevan (a nod to the days of personalising your pencil case during class), and awkward-length scarves and green-malachite broaches mimic the sentiment of dressing in non-uniform and the act of picking up souvenirs respectively from school trips.

Lewis Firth: Can you explain the thought process and starting point for your FW16 collection?
Daniel Fletcher: I was thinking a lot about youth and growing up in this collection. It’s been a steep learning-curve graduating from university and setting up my label so I’ve had to do a lot of growing up. I looked back at old school photos and thought about what it was like to be a kid in England during the 90s and the differences between them and now. This season was also for me about cementing the DNA of my brand, so there are a lot of details and styles developed from my graduate collection but I’ve had a bit more time to refine these into a more cohesive entity.

LF: You’ve had to learn and develop extremely fast since graduating last summer – how have you pushed your aesthetic forward this season compared to your Opening Ceremony capsule?
DF: The Opening Ceremony capsule made me think a lot more about fit: I had to understand how people would actually be wearing the pieces outside of the context of a show and this, in turn, influenced how I designed – but that’s not just in a commercial sense, I’m a bit more aware now. I also thought more about the wardrobe as a whole and what I want to put out there as a brand. There is more variety. It’s focused on this idea of a class of schoolboys, each with their own identity. 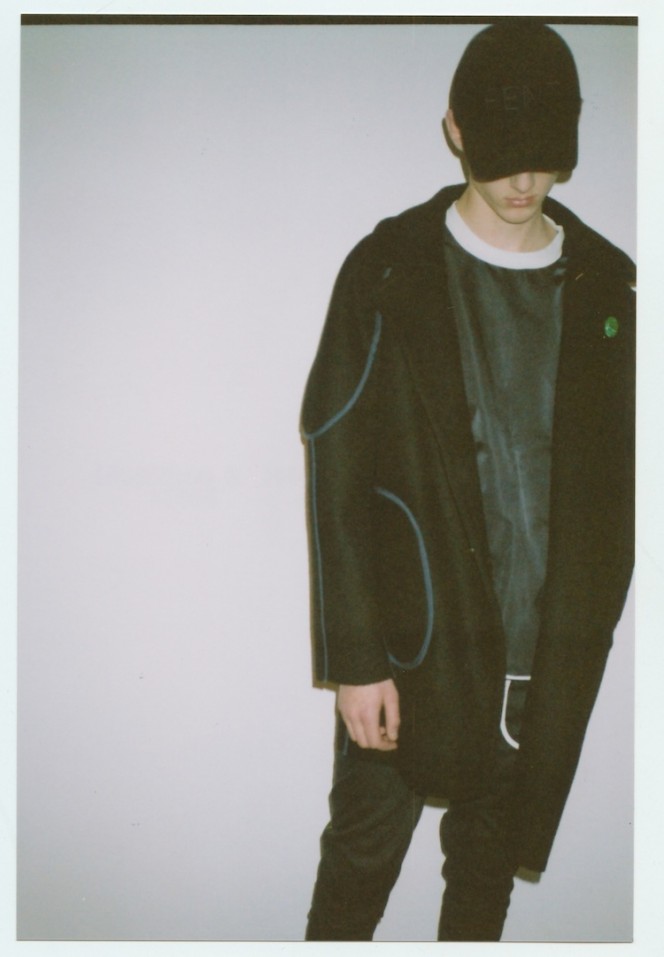 LF: Have you done anything differently this season?
Daniel Fletcher: Designing this collection was completely different to when I was working on my last one in the comfort of the Saint Martins’ studio; I wasn’t just fulfilling a brief (ticking boxes) to graduate from university. I had more freedom to develop the things that I’m interested in. I really enjoy working on accessories; being back at Louis Vuitton has reminded me how much of a difference they can make to a collection. FW16 has these leather ‘book bags’ – beautifully illustrated by Matty Bovan – awkward-length school scarves and suede ‘RENT’ caps which are intended to raise awareness of the current housing crisis in the UK.

LF: Those green-malachite broaches are a super addition, can you explain them?
DF: The malachite broaches came from the idea of picking up souvenirs on school trips – I still buy all sorts of crap from gift shops; I just can’t help myself; I’m always finding things at my parents’ house from previous visits to Chester Zoo.

LF: You’ve collaborated with Dr. Martens this season and your presentation was executed incredibly well…
DF: Thanks! I was really pleased to have Dr. Martens involved this season: they are the perfect shoes for an English schoolboy and were in my mind as soon as I started drawing.

LF: Can you muse on the ideal direction of your brand’s creative voice?
DF: Hopefully, I can get this collection into a few more stores. I’m taking it to New York next week for some appointments but I would really like to see it stocked somewhere in London, too. Going forward I want to continue finding a balance between luxuriousness and casual, within the confines of sportswear-influenced, modern-day menswear, while commenting on social issues that are important to me. 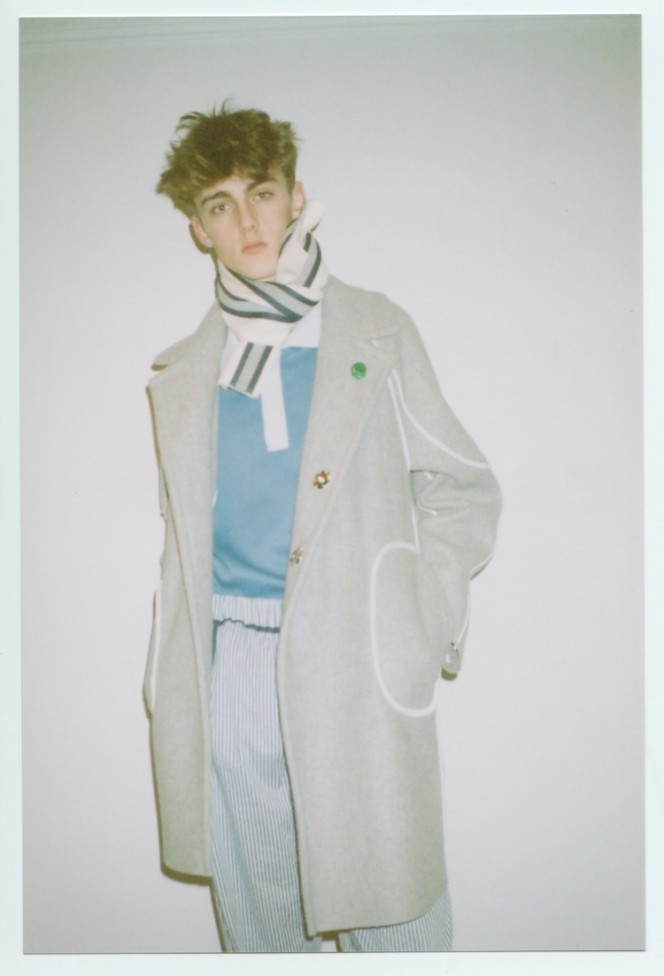 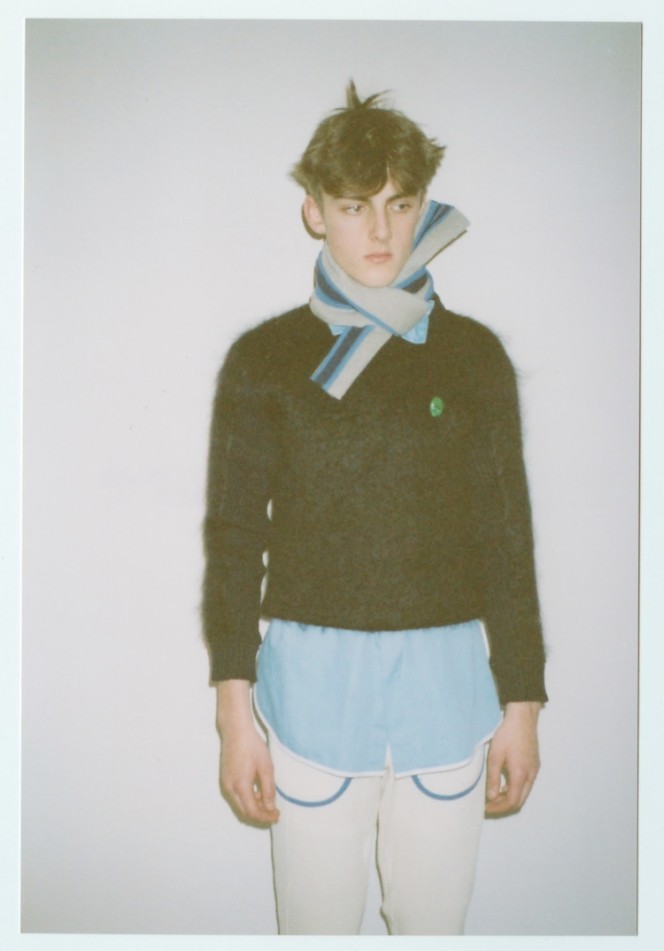