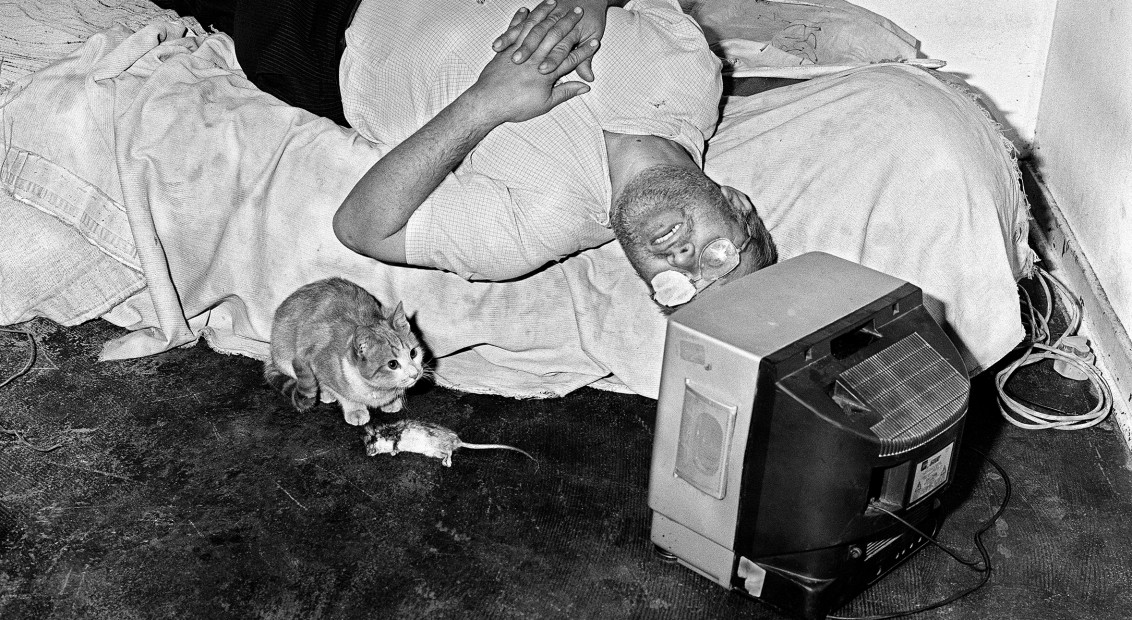 In the 1970s New York born photographer Roger Ballen relocated to Johannesburg. From there he documented the small villages on the fringes of rural South Africa, photographing the inhabitants of these places, forming his seminal publication Outland [2001].

His latest release, The House Project, is a collaboration with writer and friend Didi Bozzini. Conceived through the analogy of the house as a metaphor for the mind, the publication delves into the psyche, addressing our collective psychology through socio and cognitive themes.

Here Ballen has combed his extensive archive and assigned fifty images to one of four floors: the cellar, the ground floor, the first floor, and the attic, each of which is illustrated by passages of text by Bozzini.

Juxtaposing his documentary-style photography of the 1980s and 90s with his more recent so-called constructed imagery, Ballen’s latest release allows for a comparison between the real and the fictional. Like stills from a silent movie his photographs contain a narrative both provoking and ambiguous. Through Ballen’s distinctive mise en scene he leaves the conclusions inherently frayed for the viewer to address through their own unique thinking patterns/mind’s eye. 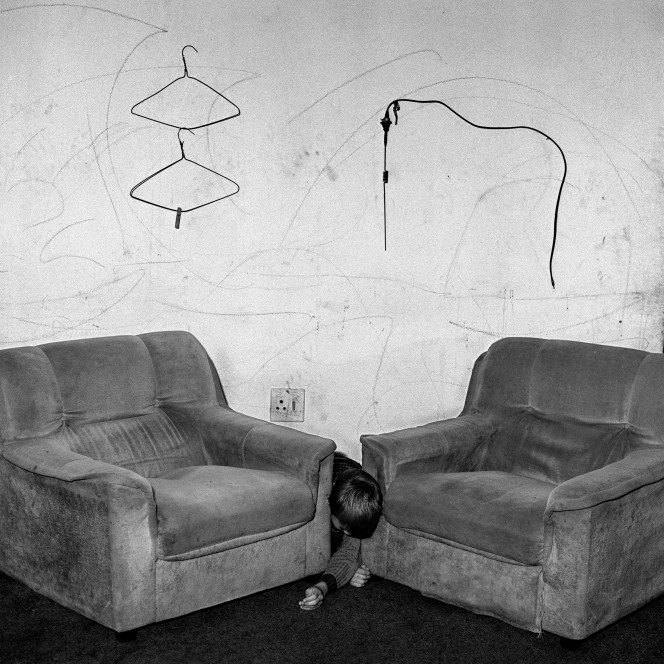 Alex James Taylor: Where did the idea for the book originate from?
Roger Ballen: I’ve been friends with Did for some time now, he wrote the introduction to my Asylum of the Birds book and we met about two years ago and we were having dinner and he suggested doing another project with me, so I was like, “Yeah great.” He said, “I like the idea of a house and the floors of the house can symbolise the different parts and aspects of the human mind and the human condition, in some way or another.” I thought it sounded like a great idea. And Didi, in his normal, efficient, organised self, immediately pounced on the idea and sent me an expose on his ideas. One thing lead to the next and we ended up with the finished book.

AJT: In the book how do your images correspond to Didi’s writing?
RB: Well, I think the easiest way to say it is that they are parallel to each other. They are not concrete relationships, he’s a philosopher, writer, poet and had to say what he had to say, and I had to say what I had to say. But there is a parallel aesthetic, a parallel interaction on each floor, and overall.

AJT: In terms of your images, where do you ideas tend to originate from? Do you plan…
RB: I never plan any pictures, I just go with the silent mind. I find that planning doesn’t work for me in photography, it’s like planning how I’m going to sleep tonight, it doesn’t help. It happens the way it happens and there are lots of variables that I can’t predict, one has to assess the scene when one is there. Relationships occur in a specific moment, in their own aesthetic way. It isn’t possible to try and do anything before, for me.

AJT: So in terms of your images which involve a human subject. Do you instruct them in what to do?
RB: Just as a small point, for the last ten years or so my models have tended to be animals, the birds are not that cooperative, and the rats that I’m working with are a little bit more cooperative. I’m not being facetious but the thing is that the subjects in the pictures… there’s an act of portraiture in my photography, from around ’86 to 2000, where nearly all the human faces in my photos expressed a sort of theatre happening between me and the subject. There’s a lot of things spontaneously happening. One time I said, “Sit on the chair and tie your shoelaces,” to the subject. And then the person tying his shoelaces, he just looked up, for whatever, reason, and that was the shot. It was interactive theatre but there’s an act of spontaneity. That’s the nature of photography, if you try and be too concrete you end up getting something more contrived and commercial.

“I never plan any pictures, I just go with the silent mind. I find that planning doesn’t work for me in photography, it’s like planning how I’m going to sleep tonight…”

AJT: You can tell in your images involving human subjects, there’s a sense of movement, like it’s a still from a film. It makes you want to know the back story behind it.
RB: Yeah, it’s a good point you’re making. There’s a whole visual narrative that leads up to the point you take the photo. The time it takes to take a photograph is quicker than it takes you to blink, so the time before and after isn’t really relative to the image itself. It’s like a good athlete, like Tiger Woods used to be, or Usain Bolt, always a step ahead, always better than everything else. And then the rest just doesn’t work for whatever reason. There’s something in that specific movement that creates an organic life in the picture.

AJT: I imagine it’s quite nice to go back over your body of work and look at it all as a retrospective.
RB: It’s very interesting, especially when you find pictures you’d completely forgotten about. It’s a great feeling, it’s like when you were a child and you found a ten pound bill on the floor, it’s that feeling, like a free picture.

AJT: I briefly wanted to finish by asking you about your relationship with Die Antwoord, how did that come about?
RB: In 2006 they contacted me – they were living in Cape Town – and they said that after they saw my Shadow Chamber and Outland books they gave up everything they did for nearly a year and reinvented themselves as Die Antwoord. So we spoke for a long time and they integrated my drawing and part of my aesthetic in their videos. Then in 2008 one of their videos went viral and got like eight million hits in a week or two, so they were combining their music with my aesthetic. In 2012 we decided to work on the I Fink U Freaky video together, and I’d never worked on a music video before. It was amazing though, I had no expectations.

AJT: It’s a great video and extends your work to another medium.
RB: It worked really well, I loved working with those guys and I think we created something special. 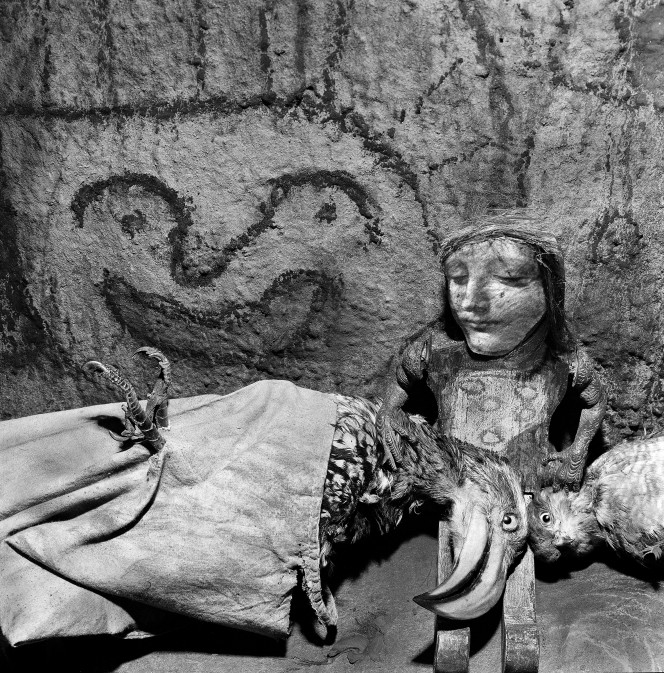 The House Project is available now through Oodee publishers. On Tuesday 17th November Roger Ballen will be at London’s Donlon Books for the book launch and signings.