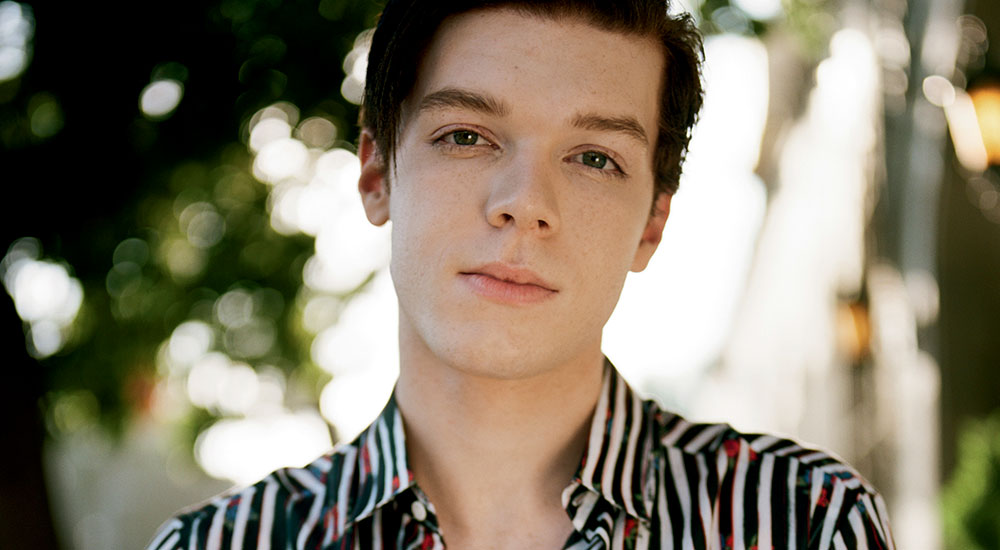 Cameron Monaghan has a lot going on. The rising American actor, Shameless star and California native reps his most recent projects – the latest Amityville flick and The Giver – in the new issue of HERO, telling us what its like to work with to Meryl Street and Jeff Bridges (who he’s partial to sharing the odd jam session with) and how to act with a face full of prosthetics…

DC: What have you been up to so far?
CM: Today I’ve just been working on the scripts for upcoming projects and then also looking at others that I might do afterwards. I have to do school work too so I’ve been working on that today.

DC: You recently wrapped up the shoot for the new Amityville movie, how was it?
CM: It was great, a month’s worth of shooting with Bella Thorne. It was a weird and very interesting experience, mainly because I’d never done a straight up horror movie before.

DC: Do you like horror movies?
CM: I do, I like all films, and I don’t think there is any genre that I don’t enjoy going to see. But then it was also fun to be a monster, a creature, something villainous and evil. Everyday I was wearing all of these prosthetics and every morning I’d spend hours in the make-up chair. It was wild and an odd challenge which I’d never come up against before, trying to act through make-up and all of that.

DC: How did it compare to some of your previous roles, you recently played Asher in The Giver, for example. How was it playing the complete flip reverse of him?
CM: I mean it was completely different. I had attachments all over my face which made it hard to read my expressions. It was sometimes limiting. I had to practice making faces in the mirror, which I hope no one saw, it was a very odd job sometimes.

DC: The Amityville series plays such a massive role in horror movie history, with Amityville: The Awakening being the twelfth reincarnation. How was it taking on such a legacy?
CM: I don’t think you can ever truly take that into account when you’re making something because you’re always trying to make the best individual product that you can. Whatever it is, it has to be entertaining on its own merits. I feel like most movies being made right now are either adaptations or sequels.

DC: Isn’t Amityville based on a true story?
CM: Well yes and no, it’s a movie based on a book that is itself based on a true story. I think the term true story is a bit of hyperbole in this sense. That being said, you say that this is the twelfth Amityville movie, I would probably disagree with that, I think that after the first few movies the rest lost what it was really  about, and that is the  story of the Amityville  house. This is actually  a direct sequel to the first movie, it’s a  return to the form of  the 70s movie, which  is my favourite of all  the Amityville films.  It’s great to be doing something directly related to that.

DC: What do you like to do when you aren’t filming? I hear you like to jam with Jeff Bridges.
CM: Oh yeah, well I play the guitar, drums and the ukulele. On The Giver we had a bunch of musical people on the set and musical people are just naturally drawn together. We’d have times where people would bring instruments to set, and other times we’d go up to Jeff’s hotel room. It was cool.

DC: Did you get to jam with Bella yet?
CM: You know I haven’t had a chance to play music with Bella yet. On that set my character is either in a coma or trying to murder people! I really tried to not even speak to the rest of the cast, and refused to leave the bed until the end of the scene, I guess to understand a bit more.

DC: What kind of music do you listen to?
CM: You know, recently I’ve actually been listening to a lot of podcasts.

DC: Informative or comedic?
CM: Mostly informative, I’ve downloaded some that are called 99% Invisible. They’re all about small pieces of design, from shoes, to bridges, to airline security. Then I also listen to ones on writing because I’m learning screen writing at school.

DC: Is that something just for now or something you’d want to do in the future?
CM: I write a lot now, I think with any craft you need to spend enough time refining it to be good, if you want people to read it and experience it. So right now I am just trying to put in the hours and get to a place where I am comfortable with other people seeing it.

DC: Well you still have plenty of time!
CM: I don’t think it’s really that different to writing long form prose, it is still definitely a format that you have to apply yourself to. It takes time to understand the structure.

DC: You’re also currently filming the fifth season of Shameless?
CM: Yeah we’re just a little bit past halfway, finishing off episode seven and twelve. It’s been a challenging season for me and at the end of the last season my character was revealed to possibly be bipolar. So we’re going down that rabbit hole this season and seeing how far that takes me. It really takes you to complete opposite ends of the spectrum, to places that you really didn’t expect it to.

DC: How does working on a character over a number of years in TV compare to only having a couple of months for a movie?
CM: It’s different and there are pros and cons to both. I think it’s a great experience to be able to live within the skin of character for these long stretches of time. I can learn every small detail about him. There’s also no need to construct a back-story for him because you’ve lived with it for so long and yet it’s still great to be excited about where your character might go each season. But at the same time, with a movie, its so great for your character to have a true beginning, middle and end.

DC: You’re one for playing varied roles, Ian Gallagher of course in Shameless, the demonic monster in Amityville, but you’ve also played a few friendlier roles too. How does that all fit together?
CM: At the end of the day no matter what it is, whether it’s The Giver or Amityville, its just trying to find out who these characters are and what they want, what you’re trying to communicate, how you’re experiencing the plot and in that sense the process is the same.

DC: You’re also a boxer?
CM: I used to do XMA, which is doing acrobatics, martial arts, learning about weapons, and all that fun stuff! But for the past couple of years I’ve just been boxing.

DC: Do you do it to work out?
CM: It’s partly physical, but mainly because I’ve begun to really enjoy the sport and learning all of the idiosyncrasies. They call it the ‘sweet science’, and it really is an amalgamation of technique and physicality – which isn’t unlike acting in many ways. It’s something that’s been really interesting me for the last few years.

DC: So lets talk about working with Jeff [Bridges] and Meryl [Streep]…
CM: Yes, it was incredibly exciting, they were one of the main reasons I took The Giver. I’d grown up watching and respecting Jeff and Meryl – The Big Lebowski is easily one of my top five movies of all time, and then Meryl Streep – obviously.

DC: Definitely!
CM: I was very excited to have scenes with Meryl, and it was probably the most intimidating thing I have ever done. While I was doing it I couldn’t really appreciate or revel in it. You have to save all the nostalgia for afterwards. Plus they both have such an incredible work ethic, which I admire.

DC: Part of studying script writing is critiquing them as well, does that come into your mind at all when you’re reading through the scripts for new acting roles?
CM: Subconsciously probably yes, however, I am never over critical of other people’s work. I certainly like to bring my own ideas about the characters I play to the set, but ultimately my job is to act.

DC: Finally, tell me something I couldn’t find out about anywhere else.
CM: I can tell you I’m the biggest nerd. When working on Shameless I spend a lot of my free time gaming. A couple of weeks ago my record was about 60 hours in five days. Which is why I should try and avoid video games because if I complete it once I’ll need to complete it a second time, but better!