McQ Alexander McQueen has collaborated with Japanese artist Yoshiyasu Tamura on a special collection for FW14. Last season saw the ‘Angry Bunny’ sketched across a series of pieces, Tamura adding to the story with another feisty furry critter, ‘Samurai Bunny’. It’s another step in the more playful direction McQ has been adopting over the past few seasons, this specific project potentially an offset of the success the brand is currently witnessing in Asia.

Whatever the reason, there’s a great story behind it: running as full prints and patchworked collages, the stripped back, visceral sketches reference a DIY aesthetic and channel Japanese youth subcultures and young rebellion. Here, Tamura reflects on Manga today, Geishas and the movements that are currently fuelling his work.

Tempe Nakiska: Can you describe what inspired the comic book print designs for McQ FW14?
Yoshiyasu Tamura: Japanese Manga is the main source of inspiration for these designs. Nowadays Manga has gained great popularity throughout the world, having originated in the ancient Japanese arts such as Ukiyoe. From ancient times Japanese painting has made use of the tradition whereby the painter conveys the subject using only basic hand-drawn lines. Today’s Manga also uses visual effects made by computers, but for these designs I intentionally kept it stripped back, using only the traditional sketch style drawn by hand. This style is typical of Manga.

TN: What elements of Japanese youth culture most inspire you?
YT: I have always been interested in ‘kawaii’, a Japanese word which refers to the importance of ‘cuteness’ in the context of Japanese culture, especially in girls. ‘Kawaii’ conveys something very different to the word ‘beauty’ in European culture – in Japan cuteness is valued above traditional beauty. It is an expression of a purposeful ‘neoteny’ in Japan, where adults find value in infantility and retain behaviours from childhood into adulthood. In my own work, I am currently interested in Geishas and Maikos in their traditional forms. 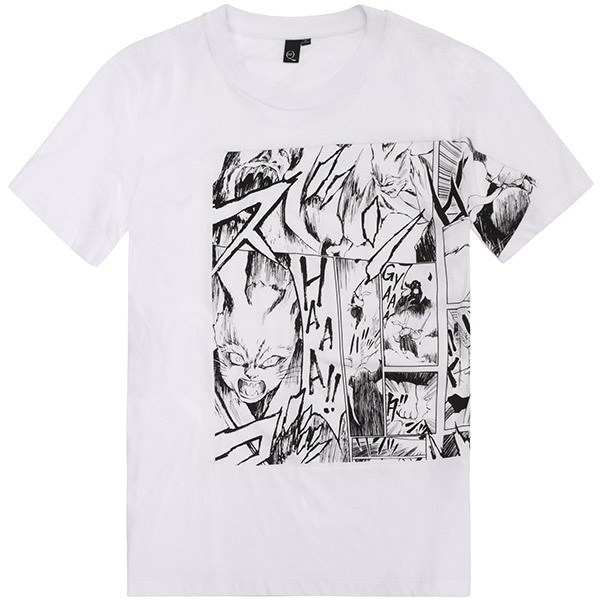 TN: What are the key elements of your own work that you brought into this collaboration?

YT: As a painter I have tried to introduce the characteristics of Japanese Manga into the designs for McQ. A common thread in Japanese Manga is the weakness of the characters who appear in the story – they are not only strong heroes, they must also be humans who have weaknesses. In this way they are the epitome of real humans, and this is one of the reasons why Manga has gained such popularity around the world. The long ears of the bunny in these designs are useful to detect the attack of its enemies and to escape as soon as possible, highlighting the fact that he is not invincible and is in danger. But in Japan the rabbit is also famously featured in the ‘Choju-jinbutsu-giga’ (Animal-Person Caricatures) scrolls, one of the oldest Manga artworks in Japan. The story in which the rabbit is the weak animal but fighting bravely has long been synonymous with the strength of the characters in Japanese Manga.

TN: What inspired you to choose Tokyo as the setting for Samurai Bunny’s samurai adventures?
YT: When I considered the story of the ‘Samurai Bunny’ who fights with the monster, I unconsciously chose Tokyo as the setting. Tokyo is one of the most beautiful and convenient cities, but it also harbours various forms of oppression. These may be characteristic of other cities in contemporary society, but in Tokyo these are becoming more obvious, especially after the great tsunami in 2011. In this way the ‘Samurai Bunny’ who fights with the ferocious monster in Tokyo represents the artist that fights against the oppressions of society.

The Yoshiyasu Tamura for McQ Alexander McQueen collection is available from August.