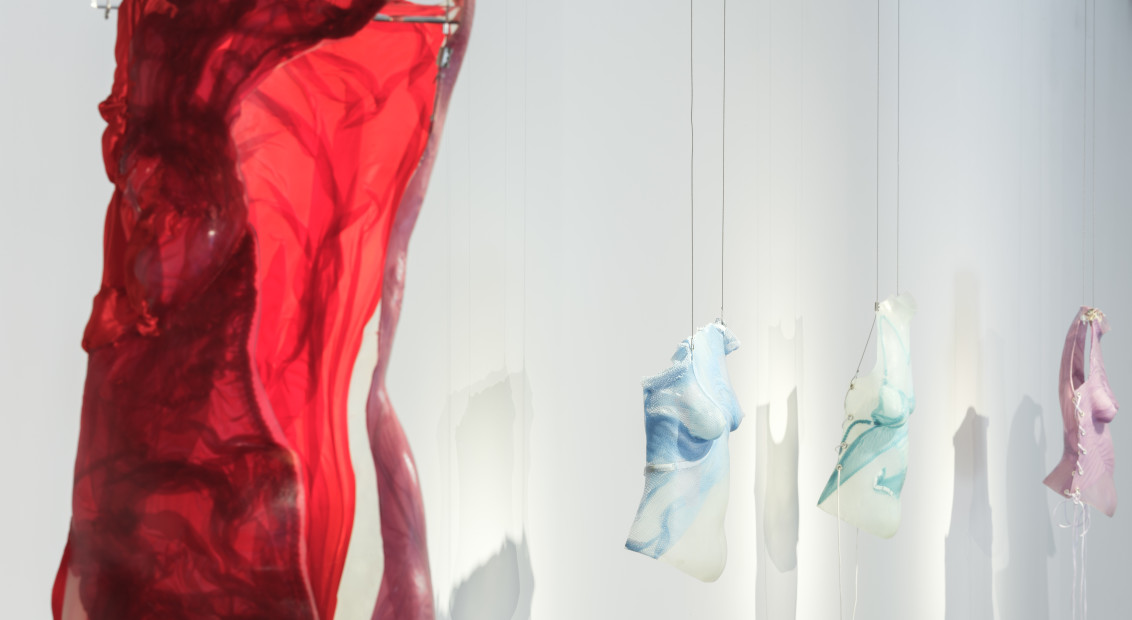 More than a decade ago, as a student at New York’s Columbia University, Manan Ter-Grigoryan found herself frustrated when her requests to write about Alexander McQueen were declined by the school’s Art facility, who were resistant to classing fashion as art. At the same time, despite access to extensive library databases, she often found that her searches for ‘fashion’ yielded tiny results compared to the wealth of material on art history; and when she entered the art world soon after, she still saw institutional reluctance to take fashion seriously as a medium of artistic importance.

Instead of allowing these frustrations to weigh her down, she took matters into her own hands by teaming with Julian A. Jimarez Howard and Marianna Kosheleva to co-found Waves and Archives, the world’s first dedicated fashion gallery. Designed to represent fashion as art and express it’s nuanced form as more than garments, Waves and Archives is every inch a passion project: from the upcoming academic journal to the meticulously-curated premiere exhibition of designer Sinéad O’Dwyer’s conceptual, forward-thinking work, the amount of care poured into Waves and Archives has already resonated with an online community of fans, critics and thinkers ready to unpick the complexities of fashion.

Just weeks after an intimate launch of O’Dwyer’s exhibition, the gallery was temporarily shuttered by the ongoing global pandemic. The founders reacted quickly and pragmatically, enlisting a photographer to bring the collection online for digital viewings. As the chaos dies down and the world begins to settle into this new normality, Waves and Archives are keen to push curation and visual culture in tune. 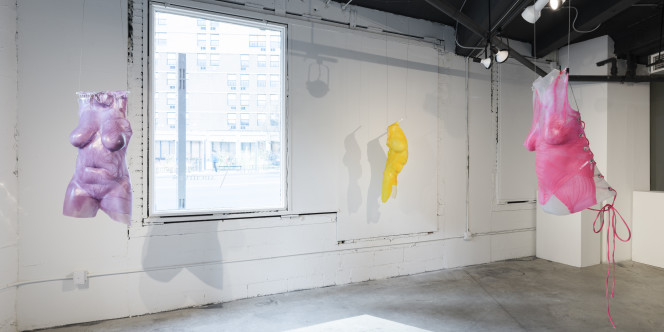 “I asked myself, “What would be enough? How can I change this in a way that’s not just rallying up my own strengths?””

Jake Hall: Just weeks after opening, the pandemic forced you to digitise your first exhibition. What was that process like?
Manan Ter-Grigoryan: We got a photographer in before the official lockdown, got all the documentation, and used a digital software called ArtLogic to have online viewings.  The truth is that we can’t create a 3D experience because we aren’t a gallery with a huge budget, but fashion is so used to living as an image. It’s two-dimensional now, and it’s okay.

JH: Tell me the story behind Waves and Archives.
MTG: It’s such a big part of me. English is my fourth of many languages – people often hear that and think of many fluencies, but before the fluencies came loss of language. Having had to move a lot as a kid, I found myself time and time again in societies with whole new visual languages, cultural cues and hints, unable to approach them through language proper. So I fell back on art – I’m not specifying fashion, because for me it was visual culture, in all of its glory. I looked to fashion for those cultural cues to hang my hat on before I gained fluency in a new language.

JH: So fashion became your cultural anchor, something to transcend that loss of language?
MT: Exactly. It’s still a code with its own system, but to me – and this is not to undermine my love of languages in any way – it seemed a little more intuitive, a little more immediate.

JH: You always reiterate that fashion and art are two sides of the same coin, which is still controversial to some people. How did that become the mission statement?
MTG: After studying semiotics and media analysis in college, I came to Columbia University to study Modern Art Curatorial Studies. It was an amazing program which I loved, but our faculty had important critics who, you could argue, decide what art is. I mention their importance, because it was tied directly to my heartbreak: if these people aren’t letting you write about Alexander McQueen for your thesis, if they’re telling you it’s not art, then you become wary. You become cognisant that it’s a problem on an institutional level.

JH: That’s definitely something I’ve noticed in the past too, that fashion often isn’t taken seriously in academia.
MTG: For many years, I saw it as something I had to fix alone, writing and creating all the knowledge, but the reality is that it was more a matter of reassigning the existing knowledge. I wouldn’t be the first to write about the applicable topics. So, I asked myself, “What would be enough? How can I change this in a way that’s not just rallying up my own strengths?” 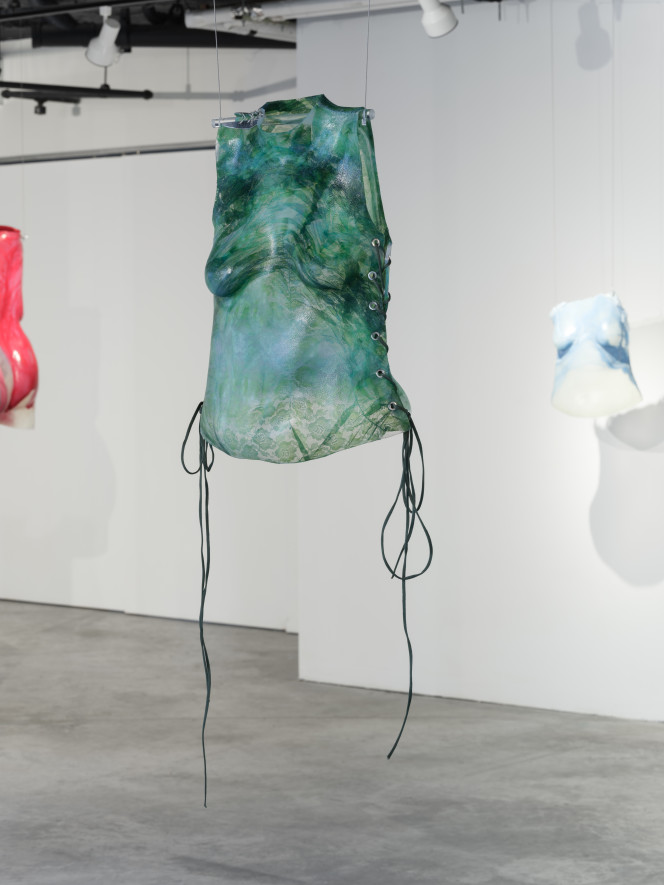 “If you’re a student in fashion school, you’re not taught to stand up for your art in the way that students in traditional art media are…”

JH: A lot of what’s out there isn’t accessible, too – fashion libraries tend to be very design-focussed, and a lot of those resources are either rare or expensive.
MTG: Exactly. So I saw it from two perspectives: in traditional academia as an art history student, you can’t write about fashion, and even if you do write about it, you hit these roadblocks, because either not enough has been written about it, or it’s inaccessible. At the same time, if you’re a student in fashion school, you’re not taught to stand up for your art in the way that students in traditional art media are; you’re trained instead to appeal to buyers and decode what consumers want.

JH: Waves and Archives is the first dedicated fashion gallery – how does that differ from the fashion exhibitions that have been held in art museums?
MTG: When fashion started to enter museums, it was what I like to call ‘blockbusterised’ – as the goal was often to get crowds in. As a result, fashion was often curated in a way that, had you done the same with any other medium of art, you would be lynched. Imagine going to the Metropolitan Museum of Art and seeing a room with Da Vinci next to Van Gogh purely because the works are both yellow – it just wouldn’t happen. But if it did, people would have the vocabulary to criticise it, and that doesn’t always happen in fashion. I’m accustomed to speaking in examples because, when I say that fashion isn’t considered art, people say, “Oh, well it’s in museums!” But under what terms? Who’s writing about it? Usually, they talk about the craft, the number of stitches, the fabulous details. I understand fashion has its own apparatus, but that’s not the way that most conceptual art is written about. 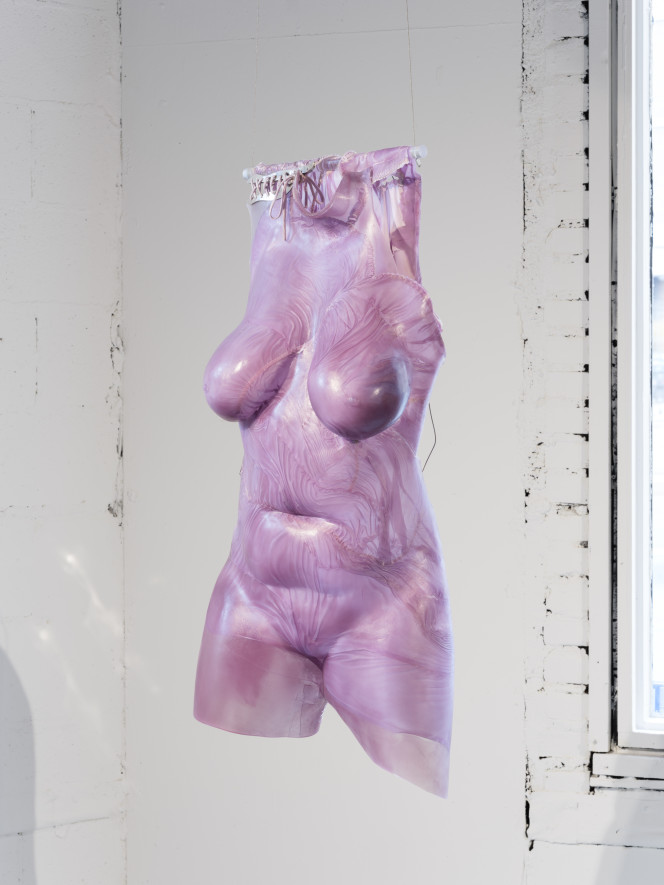 JH: Especially with couture – it does seem there’s more emphasis on the process than the final result.
MTG: It is true that couture is often defined by the number of hours and stitches. With all that being said, there is something there, but there’s also something missing. My theory is that fashion isn’t suddenly art; I think art has grown up enough to count fashion as one of its mediums. Throughout the last century, art has gone through cycles: we’ve dealt with mechanical reproduction, photography, performance art, immaterial objects, new media and digital art… after all of this, we’re finally able to start tackling the complexity of fashion, which incorporates all of those.

JH: What made you choose Sinéad’s work for your first exhibition?
MTG: The work went into all of those disciplines in such a balanced way that I thought it belonged to the study of fashion as art. I wanted to really think about a few things: the description of Sinéad’s work as ‘sculptural’ – a word I don’t like, as it is often used to “justify” fashion as art; the questions of body and gender politics. Sinéad’s personal relationship to her work is focussed and mature, and there’s this passion and vulnerability that you usually see in young artists, which I thought tied well into our being a young gallery

JH: I get that completely – the synergy between Sinéad’s work and Waves and Archives as a real passion project does make complete sense.
MTG: I would have gladly shown the pieces Sinéad is working on right now, the ones that are more wearable – another word I don’t like in its current use. But I wanted to leave room to not shock the world with this exhibition. I want to change the way the world thinks and not necessarily just argue with it, so I wanted to choose works that could be more readily recognised as art. Had I had shown the wraparound piece, people wouldn’t have been able to conceptualise it as anything other than clothes. So really, it was part falling in love with the work and part being smart about it.

JH: You’ve already had an incredible response to these years of work, so my final question is how do you feel about the reaction so far?
MTG: Right now, it’s getting a lot of interest. There are a lot of museums that show fashion, but this is the first dedicated fashion gallery – which makes Sinéad the first represented fashion artist, which is iconic. I really hope that, some day, Waves and Archives will be in art history books as a movement. But the most important thing is that Waves and Archives is an art movement full of writers, artists and thinkers – and anybody who believes that fashion is an art medium is already a part of it.

Find out more about Waves and Archives here.