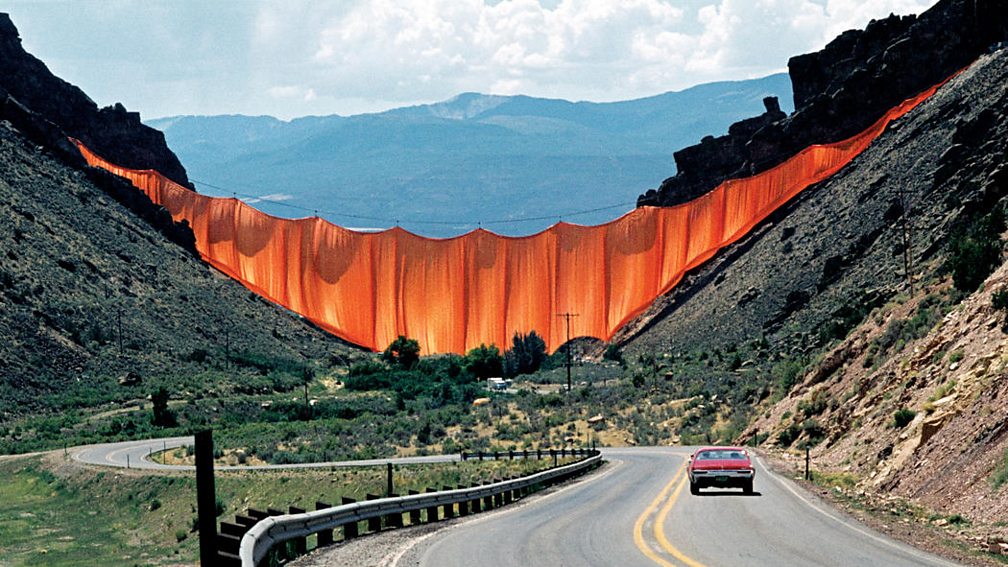 Christo and Jeanne-Claude: the land art duo who moved mountains and walked on water

Christo Vladimirov Javacheff and Jeanne-Claude Denat de Guillebon, known professionally as Christo and Jeanne-Claude, were an artist couple who emerged during the Cold War and produced immense environmental sculptures with unprecedented ambition and scale. Wrapping monuments in fabric, creating land platforms on water (seen recently in London’s Serpentine) or bridging valleys with cloth, their elemental work was an encounter with the sublime that broke new ground in land art.

Unlike most artists, Christo and Jeanne-Claude never intended their art to last. Though they produced work together from the early 60s until Jeanne-Claude’s death in 2009, their sculptures were site-specific and ephemeral flashes of ‘what if?’, rather than commodified artworks that grew in stature through exhibitions and collectors. As key figures in the development of land art throughout the 60s and 70s, their transient installations sit alongside the likes of Richard Long and Robert Smithson, who, like them, can only be truly appreciated through physical experience.

Born on the same day, 13 June 1935, Christo and Jean-Claude’s fate was seemingly tied from the start. Both escaped their place of birth, arriving in Paris during the late 50s, Christo from behind the Iron Curtain in Bulgaria (after studying in Prague and Vienna) and Jeanne-Claude from her stately Morroccan family.

The transition was hard for Christo, who struggled with French and earned a paltry living by painting portraits. Despite likening the job to prostitution, it introduced him to Jeanne-Claude, whose high-society mother had commissioned a portrait from Christo. 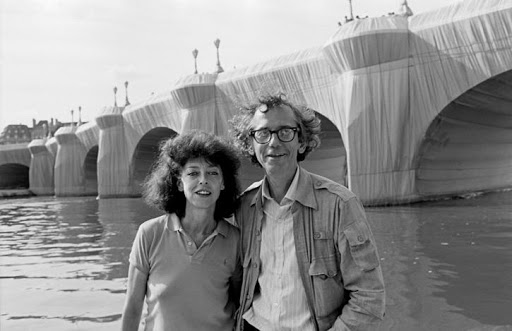 Christo and Jeanne-Claude at The Pont Neuf Wrapped, 1985
Early Work

Shortly after the birth of their illegitimate son in 1960 (Jean-Claude had conceived the child during her engagement to Philippe Planchon), the pair began producing art together as creative equals, with Jean-Claude later taking on the role of Christo’s manager. While they always maintained their work was strictly apolitical, early installations, produced at the height of the Cold War, are an obvious outlier.

Beginning with pop-art sculptures of small, cheaply available objects wrapped in resin-soaked canvas – cans, bottles and even motorbikes – they moved on to their first monumental project in 1962 with Rideau de Fer (Iron Curtain), blocking off a narrow street in Paris’ Latin Quarter with a four-metre high barricade of piled up oil drums. The piece was dismantled within 24 hours (in spite of Jeanne-Claude holding up the police) but it was a defiant protest against the Berlin Wall and gained the pair notoriety around Europe. 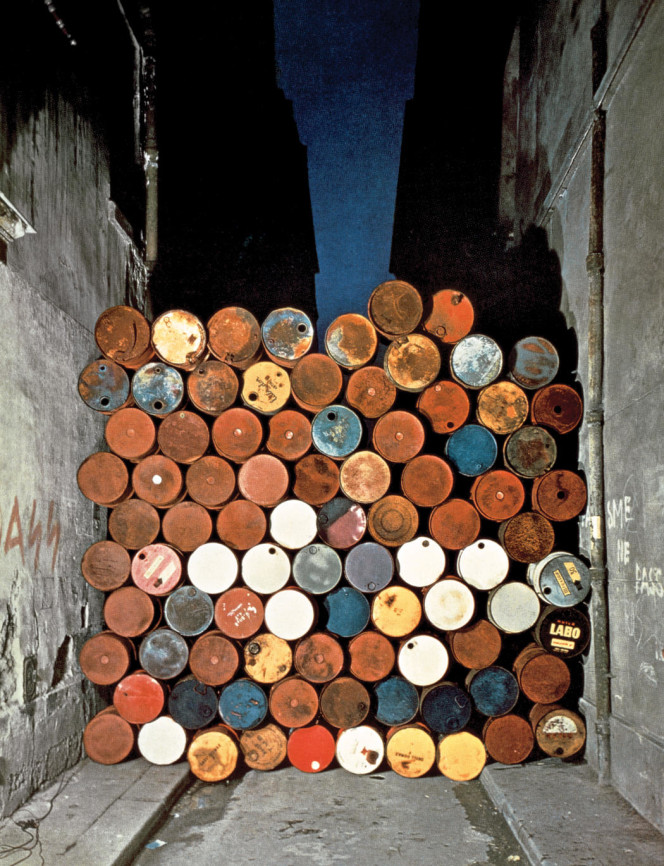 After settling in New York permanently in 1964, Christo turned his eye for arresting visuals to designing storefronts that would fund the pair’s later projects. Beginning with 5600 Cubicenter Package in 1968, this enormous inflatable phallus (then the largest inflatable structure ever made) was erected to nearly 300ft using Europe’s biggest cranes for Documenta 4. In 1969, Christo and Jeanne-Claude dreamt bigger still, wrapping 1.5 miles of Sydney coastline in erosion-control fabric for Wrapped Coast.

That began a series of scarcely imaginable wrapped spectacles, including the Reichstag in Berlin and Pont Neuf bridge in Paris, both involving diplomatic-level permission procedures, thousands of volunteers and vast costs that were covered almost exclusively by the artists.

Other notable projects include Valley Curtain (1970), a 400m long cloth stretched between Rifle Gap valley in the Rocky Mountains, which cost around half a million dollars in fabric, steel and concrete and Running Fence (1972), an 18ft fabric fence that ran 25 miles over Californian ranches and into the sea. Christo has a number of upcoming exhibitions at major European venues, including Berlin’s PalaisPopulaire, all of which are currently postponed. 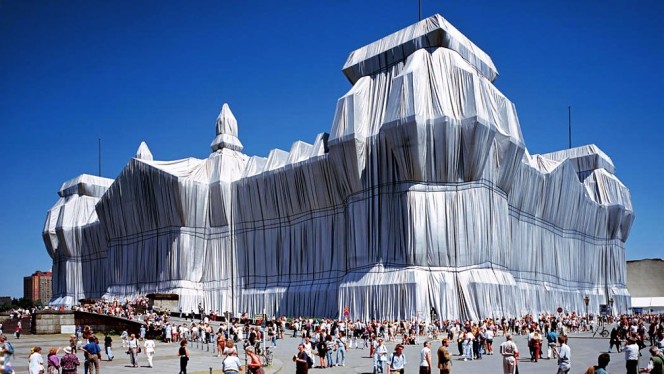 Four years ago, Christo transformed Italy’s Lake Iseo with one of his most ambitious large-scale projects (which considering his resume, is saying something), the first since Jean-Claude’s passing and one they had conceived together back in 1970. For sixteen days, 100,000 square metres of bright yellow fabric floated just above the lake’s waterline, creating an undulating sixteen-metre wide, 3km-long land bridge that bobbed and drifted on 220,000 high-density polyethylene cubes. 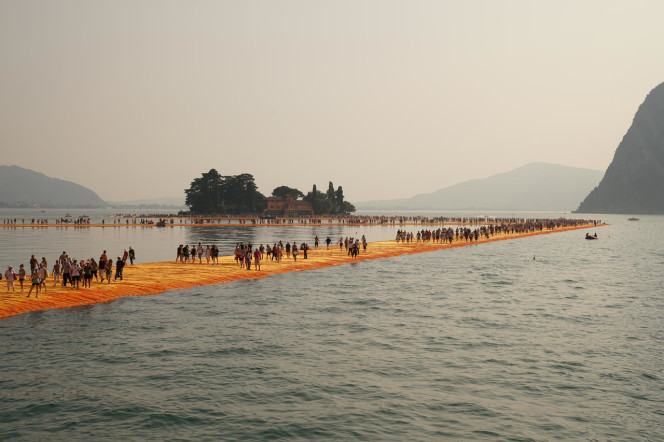 Beginning in the narrow passageways of Sulzano, this magical yellow fabric was, “An extension of the street and belonged to everyone,” according to Christo. Plotting a path to the lake’s edge, residents and well over one million visitors connected with the neighbouring Monte Isola and San Paolo islands like never before, striding out on the water in a Biblical act of suspended reality that Christo has made his signature.

The Floating Piers also typified Christo’s democratic belief in accessibility, not just creating work for all (“No tickets, no openings, no reservations and no owner”), but facilitating an immersive experience that appealed to an innately human sense of the sublime. This wasn’t art for people interested in art, more an experimental fantasy that questioned a universal perception of the physical world. 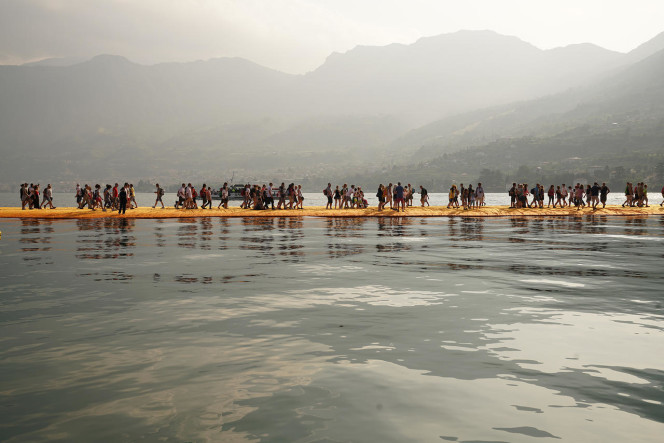