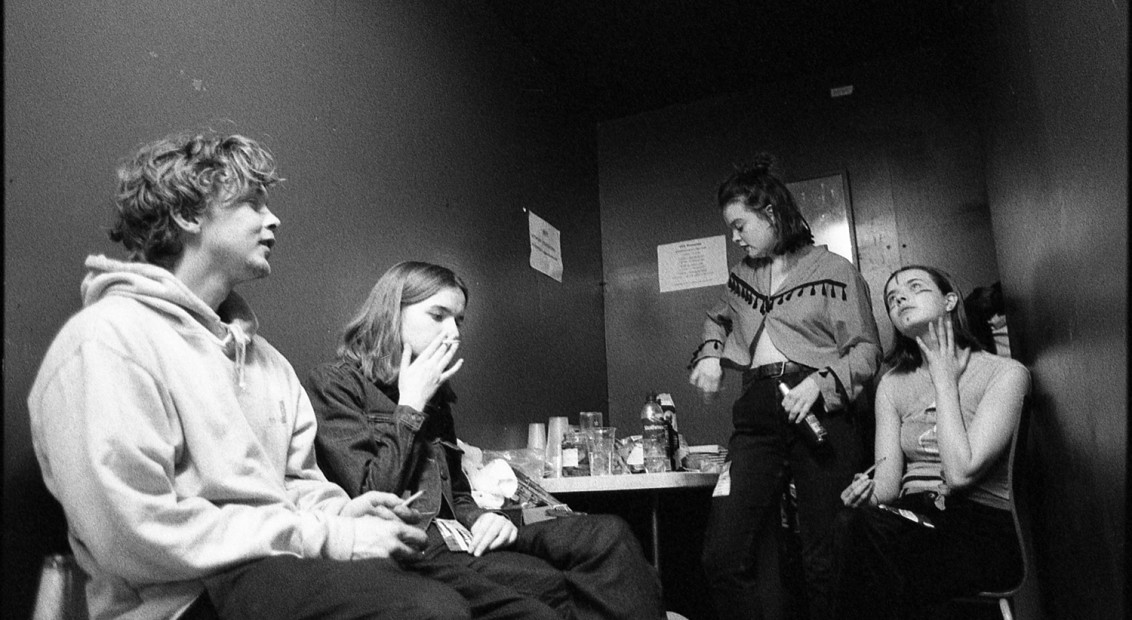 Based in Edinburgh and Manchester respectively, Owen Godbert and Ste Fletcher run Through the Eyes of Ruby, a photographic journal documenting the UK’s thriving underground music scene. Skateboarding from an early age, both photographers grew up flicking through the pages of Sidewalk magazine and browsing DIY skate videos online, influences that would later filter their own aesthetic: shot exclusively on black and white 35mm film.

Documenting as many as four gigs a week, Through the Eyes of Ruby has seen Owen and Ste follow the Fat White Family rip up venues across the country and hang backstage with the likes of Goat Girl and Pregoblin, creating an intimate, on-going portrait of the UK’s brightest sonic talent. Flicking through their archives, here the duo select their highlights and take us through the stories behind the photos. 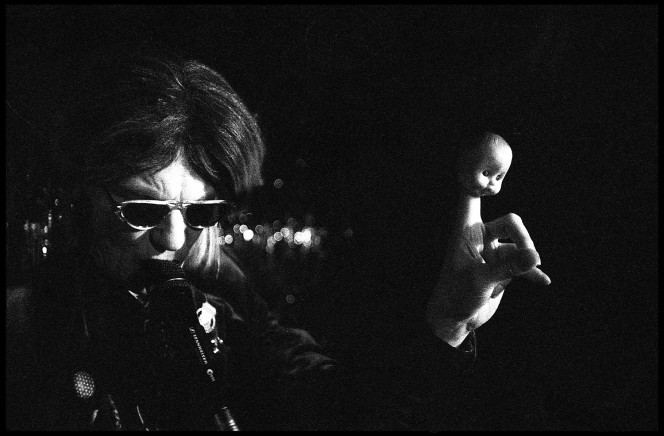 Herb Diamanté, Through The Eyes Of Ruby exhibition, The Windmill, Brixton 2018

“This was taken at our first exhibition at The Windmill in Brixton. It came about through our friend James from the band H0nkies. We had nine bands on the bill and around 50 darkroom prints we’d made especially, all stuck up in the smoking shed out the back of the venue. I feel like this was a turning point for us as we decided that this was what we wanted to do with the project. The evening was a sell-out show and turned into absolute mayhem. A few arguments, a few too many substances and a lot of stage invasions [laughs].

The next day some of us went to ‘spoons in Brixton for pints. While outside having a cig, I decided to photograph this old guy smoking outside the pub. This backfired and soon escalated into him swinging his walking stick at us, hitting Owen’s dad in the back with it and trying to headbutt him! Back inside the pub, he was still trying to fight us all. It got so out of hand that another guy in the pub warned us that we’d picked the wrong bloke and needed to scarper! So I fled from Brixton.” 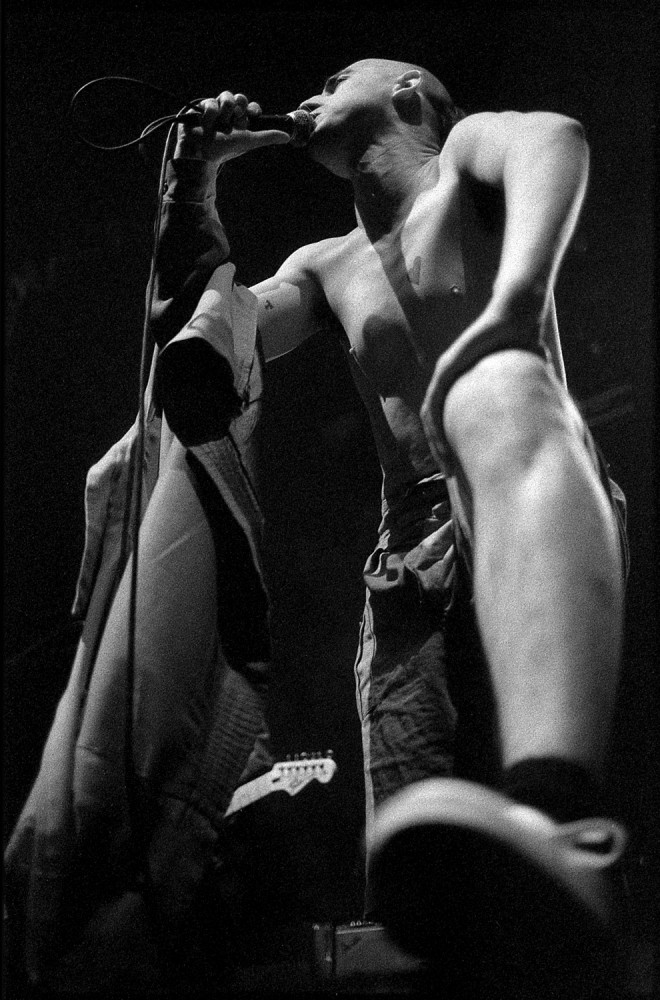 “On this tour, we tried to go to as many shows as we could in the North. After this gig in Manchester, I had to travel back up to Scotland for work and then the following week headed back to Sheffield to see them again. I couldn’t afford the ridiculous price of a train ticket so I had to skip it.

Just before Leeds the ticket guy caught me and told me to get off in Leeds or give him £80. So I got off in Leeds, but in a split second decision I hopped back onto the same train, but further back where there wasn’t a corridor running through. I spent the next hour completely riddled with anxiety and still had to avoid the ticket person in this half of the train! I got to watch the Fat Whites play twice that same night though.” 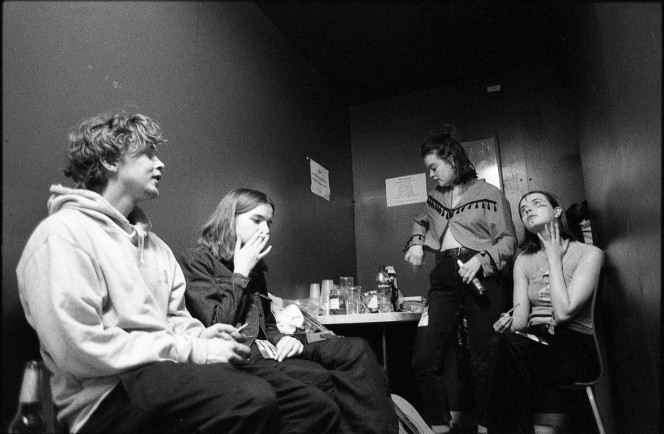 “This is a really old one, but I also think this was a pivotal moment in the project, for me. It was the first time I’d seen The Moonlandingz and Goat Girl were supporting them on tour. It was a good introduction to photographing gigs, like changing film while getting thrown around and covered in beer. After the gig my friend Charlie and I ended up drinking backstage with Goat Girl and unknown to all of us, the whole place had been evacuated as we’d set the fire alarm off by smoking in the backroom. The first we heard was when the manager burst in screaming at us and kicked us all out!” 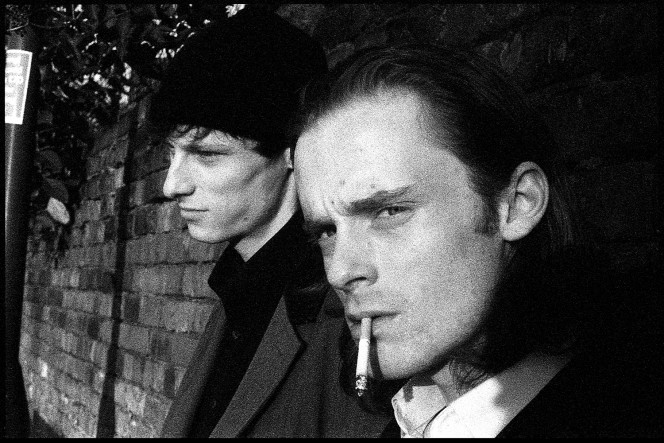 “We’ve been friends with this band and worked with them since the start of the project. We have shared many mental nights together – they have to be one of the most inspirational underground bands I’ve come across. We are one big unhinged family.” 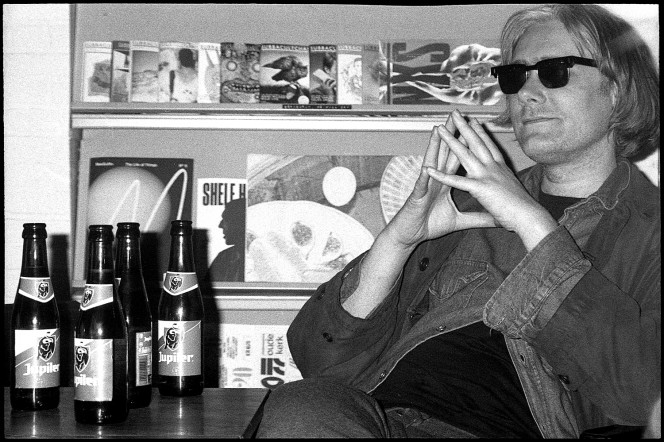 “After being up all night wandering the streets of Paris trying to figure an affordable way of getting to Amsterdam we thought we finally had a coach booked. Turns out we didn’t. A long and extremely frustrating journey followed, which involved lots of arsehole drivers, a stop off in Lille, and again in Brussels, and some sneaking onto coaches without tickets. We finally made it to Amsterdam twelve hours later to catch the show.” 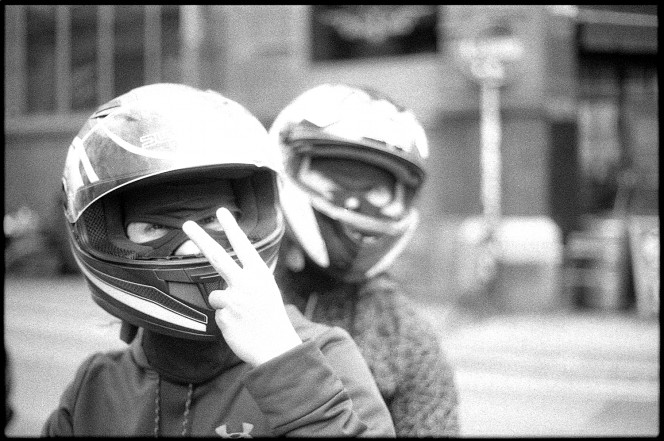 “I was in the middle of doing a photoshoot for London-based band Maddonatron in Manchester city centre. These two scallies revved up on a ‘ped saying they’d just robbed it, so I took this portrait. Right place, right time.” 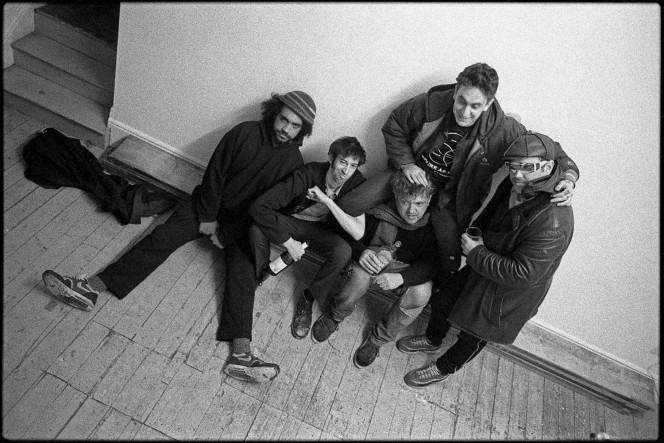 “The night we met Jack Medley! Ste took a portrait of him outside the venue and then he invited us backstage to drink with him and the band. They had a huge rider and Jack just kept giving us wine and tequila. The gig was wild and we didn’t get any live photos at all [laughs]. We kept in touch with Jack though and he became a massive supporter of our work. He once bought thirteen prints from us and remains pretty much the only person who has ever bought our photographs. He’d also just stay up and chat to us all night and send us music he was working on, which was always amazing!” 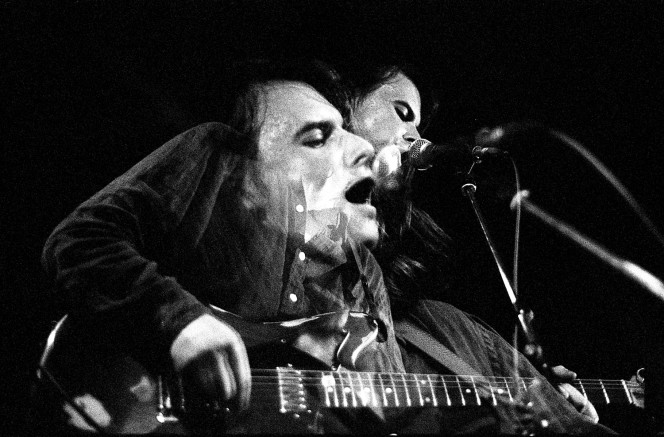 “An insanely eventful weekend in Glasgow last year. I was there to take press photos of the band on the Sunday for their upcoming album (which actually just came out this month). They were also playing live on the Saturday night and the one before that, my friend’s band Objectified were playing along with the 80s punk band, Flipper. So I decided to go through on the Friday and stay all weekend. During Flipper’s set the singer smacked me over the head with his mic because I wasn’t jumping around like most of the crowd were.

I’m still not sure whether it was this or the amount of bourbon that I drank backstage after the show, but that night I blacked out for around three hours before coming to in Kelvingrove Park without any of my stuff or any clue what happened. Because of the shoot, I had two cameras, six lenses and about £60 worth of film in my bag and also my passport. I then had to spend the night sleeping rough in a random stairwell as I wasn’t sure where anyone lived and I had no battery on my phone! It was a terrible and fairly traumatising night at the time!”