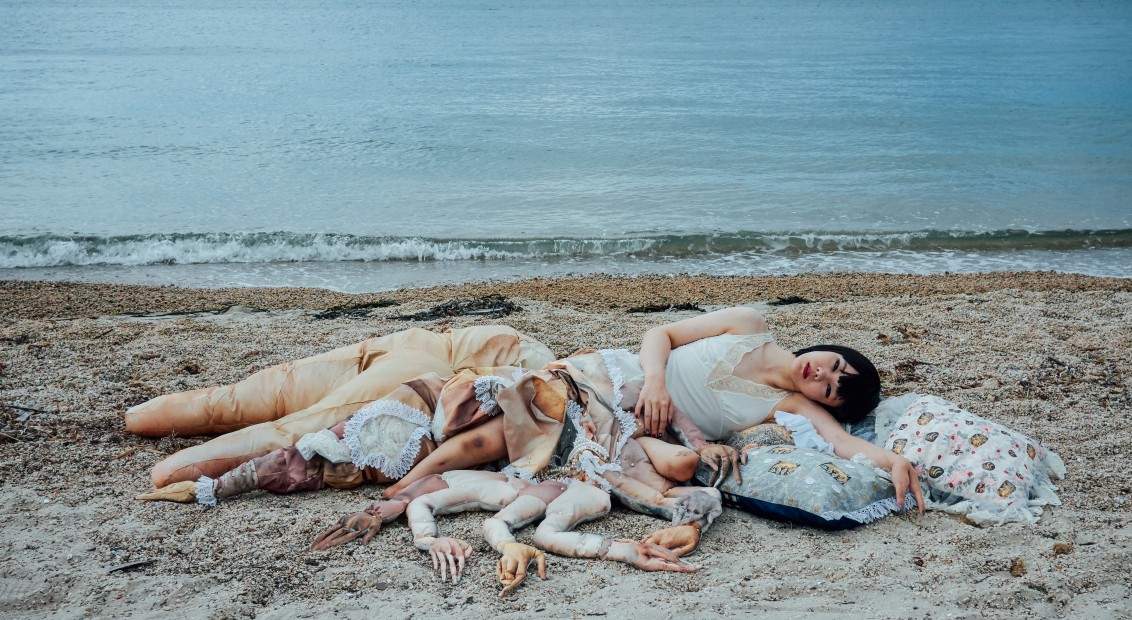 Born with a rare condition known as tibial hemimelia, Japanese artist Mari Katayama was nine when she chose to have both legs amputated. In the years that followed, she became outcast and alone, unable to communicate in a country whose Eugenic Protection Law sterilised people with disabilities or mental illnesses as recently as 1996.

With her prosthetics however, Katayama’s creativity ignited. At first through necessity, with needle and thread, sewing clothes to fit her artificial limbs and then via illustration and photography, producing images to broadcast feelings her words could not. More recently, Katayama has garnered international attention, not only for her participation at last year’s Venice Biennale but her photographs that spotlight universally underrepresented issues. Whether critiquing conventional notions of beauty, archetypal femininity, the fetishisation of women or the invisibility of disabled people, Katayama’s art is also her activism, forcing us to confront her feelings and modify our own. 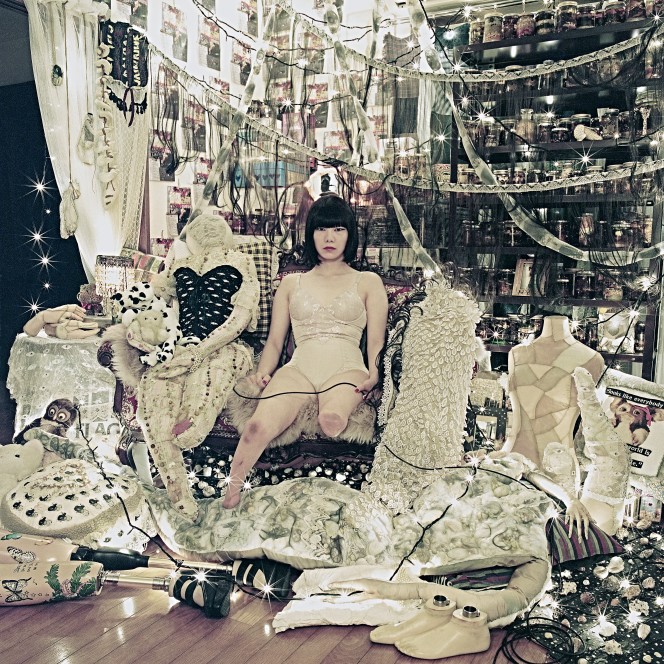 Finn Blythe: Since you were young, you have used your body as a canvas and a means of communicating, is this still the case?
Mari Katayama: When I was making my earlier work as a teenager, I had a strong desire to be understood and to share my feelings with others. I was making artworks because I believed that words could not describe my feelings. If it can be expressed in words, what does it mean to make a work of art?

Finn: How has your message changed since your teenage years?
Mari: As I grow older, I’ve come to realise that it is not possible to understand each other 100 percent, and it’s not a sad thing that brings a sense of resignation or severance. Rather, this field of misunderstanding is rich in humanity and it is a pleasure to find meaning in it. Words empower us, no matter what environment, society, world, or era. My former tutor, Kazue Obata, said, “Through books you make friends with anyone beyond the boundaries of time.” So for me now, the work and the words are equally important.

Finn: Much of your work alludes to specific periods in art history and the work of classical painters like Botticelli and Millais. How do these references add to the reading of your art?
Mari: I got along well with my grandfather and he often took me to museums, so I grew familiar with modern paintings as a child. I also majored in art history and aesthetics for my first degree, which may have influenced my thoughts. I think these experiences led me to question how culture is generated and what beauty really means. 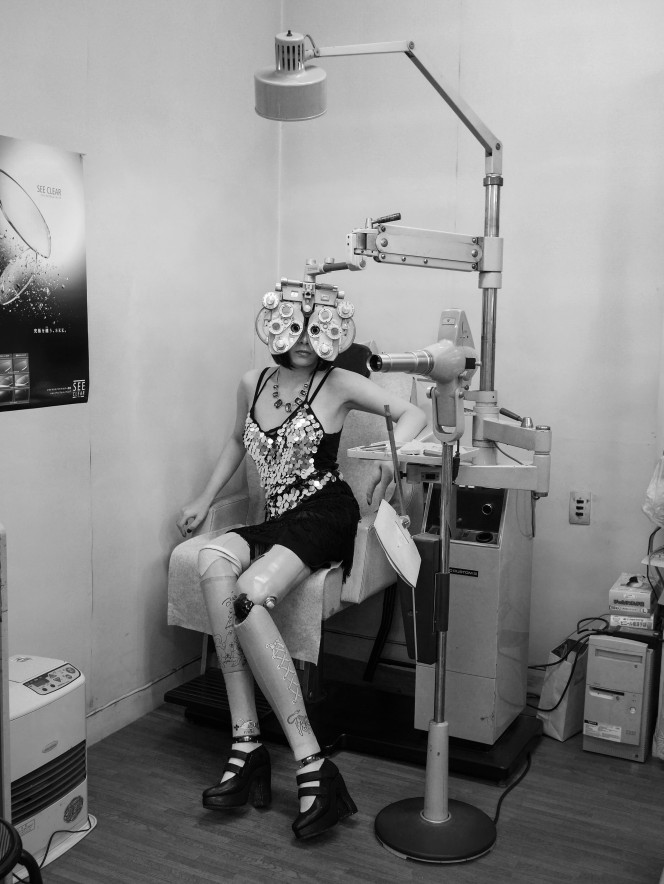 Finn: The dolls that appear in your photographs are inspired by Naoshima Onna Bunraku – a traditional puppet performance art performed exclusively by women. What are the wider associations between dolls and femininity in Japan and how have you chosen to explore that in your work?
Mari: My encounter with Naoshima Onna Bunraku was quite simple: I was participating in a community- based art festival. I was very foreign to this story in Naoshima and I felt uncomfortable as an outsider. But over time, I learned more about the background and the current lives of people who inherit Bunraku today. I then began to think of a way to connect them to my practice which, until that moment, was to trace my body and my life. So I made this experience into the work bystander (2016).

Finn: How has having a child changed the perception of your body and, by extension, your work?
Mari: It was a lot of fun. The experience of creating the work bystander, which focused on the body and life of others, turned out to be very useful for my actual pregnancy and childbirth. The process of bearing discomfort into reconciliation through the appearance of others in my work was very similar to my experience of bearing another being in my body. Hyperemesis gravidarum, which is a pregnancy complication that causes nausea, vomiting, and weight loss, is said to be a rejection to the symbiosis of a foreign body in mother’s bodies. As the stomach grows and joints weaken, the feeling of handling my changing body was just like what happens in my practice. Strangely enough, one can often learn lessons from one’s own work.

Finn: In Japan there is an entrenched stigma towards people with disabilities, as evidenced by the lack of response to the 2016 Sagamihara massacre, Japan’s Eugenic Protection Law and the continued institutionalisation of people with disabilities. Is there a cultural explanation for this attitude and what do you feel is the best way to challenge it?
Mari: The Sagamihara incident really hurt my heart. I felt a pang of sadness and pain but it took time for me to figure out what kind of feeling it was – although, of course, the shocking brutality of the case was obvious. I think this incident was an externalisation of the consciousness and perspectives people have on disabled people in Japan. One of the causes may be longing for beautiful and healthy bodies – obsessions formed during rapid economic growth since the war. It is not easy to answer given the complexities of the perpetrator’s personal story, but I think the case certainly shows a real problem inside the country. Everyone tries too hard to be useful, that’s what I always think.

“Everyone tries too hard to be useful, that’s what I always think.” 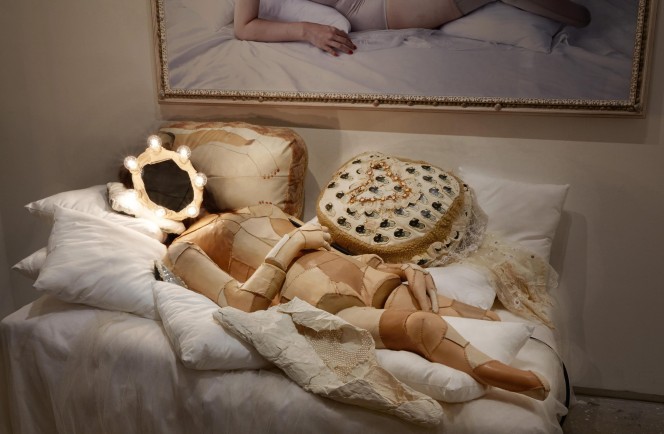 Finn: Your photographs were featured in the central exhibition at last year’s Venice Biennale – is your work received differently outside of Japan and if so, how would you characterise that difference?
Mari: The most obvious is the amount of media coverage. After the announcement of the Venice Biennale, interview requests and inquiries about my work flooded in from overseas almost everyday. By contrast, I received just four or five inquiries from within Japan. I was glad that the viewers overseas openly gave me comments – whether positive or negative. I hear almost no feedback in Japan.

Finn: Your practice includes performance, modelling and singing – how do you see these art forms relating to your photographs and sculpture?
Mari: I go out for modelling, performing and singing, and then return home when I feel bored or wanting some time to think or to produce work. I learn from playing different roles of myself inside and outside home – all these experiences are distilled into my work.

Finn: What influences your choice of backdrop for each photograph? From nature to domestic settings, what do they tell us about your experience and memory?
Mari: Everything is so organised at home that it’s really easy and convenient for me to work there, even without the prostheses. It’s very easy to shoot photographs and to elaborate, which makes my work great fun. You might think that I’m expressing everything as it is – my body and the whole room – in these photographs, but most of what you see is set up for the photo shoot. When shooting outside, I decide location based on a specific concept and a story. You cannot control natural environments, so I just enjoy all accidental and chance occurrences. 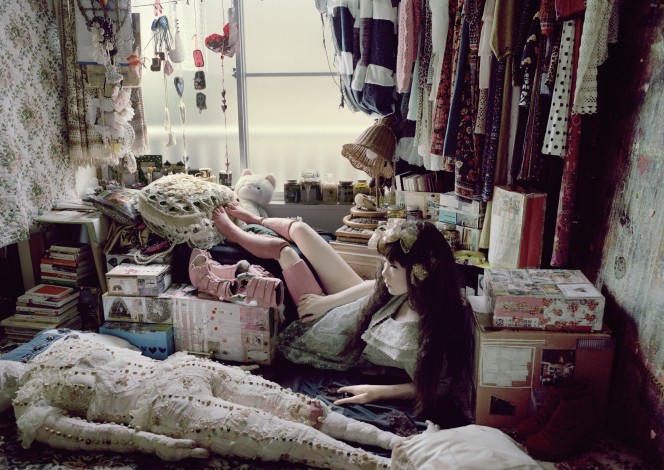 I have child’s feet, 2011, image courtesy of RIN ART ASSOCIATION

Finn: Jewels, shells, lace and other embellishments feature throughout your work and yet you reject traditional notions of beauty. How do you see this paradox adding to the reading of your work?
Mari: I like beautiful things. One might think that most beautiful things have a perfect form, but I don’t think so. I often take a broken heart as a motif in my work. There are beautiful things that everyone agrees on, and there is another kind of beauty that acquires recognition through the process of becoming beautiful, and the latter takes time. As time passes and we inevitably grow older, our bodies get brittle, bones get weaker, and break, we become more vulnerable to tears. For me, a broken heart that glitters like a mirror ball is more beautiful than a perfectly shiny heart.

Finn: The DIY element of your work has seen you make plaster cast moulds of your body and a wig from your hair. How does creating versions of yourself help you better understand the way you are seen?
Mari: That’s a difficult question. Almost all plaster statues and patchwork pieces are made by modelling, imitating my body or printing photos of myself on fabric, but I don’t think that it is a version of myself. Perhaps it’s just a motif, something I use like a mannequin? Just like it speaks on behalf of human beings in general. One of my works, you’re mine (2014), is an installation of a self-portrait photograph, a plaster figure, and a large mirror. The plaster figure is moulded from my exact appearance, including my fingerprints. It’s then covered with patchworked skin and a mirror is attached to the figure’s face, which reflects and absorbs other faces that appear in the mirror. An actual human body and the mirror that projects oneself in the present. These mirrors face each other, reflecting oneself forever.

“There are beautiful things that everyone agrees on, and there is another kind of beauty that acquires recognition through the process of becoming beautiful, and the latter takes time.”

Finn: Much of your work is concerned with memory and experience as a means of manipulating the way you are seen. Are there particular experiences or memories you return to more often?
Mari: It’s difficult for me to talk about the way I am seen in relation to my work, but I – as myself not in my self-portrait series – often care about the way people see me. So I often behave as discreetly as possible. At a young age when I began to use prostheses, I was studying and imitating ways of walking ‘normally’, observing how other people walk.

Finn: How are your ‘public’ and ‘private’ personas reflected in your work? Do you feel you ever present an authentic, true version of yourself?
Mari: I don’t know what a true version of myself is. But I suppose I pursue human truth – although of course, no one can judge what is right or wrong. The same applies to the binary positions of myself in private or public life – my introspective self in the private life, and more outgoing self as an artist. Myself as a woman, a mother, a daughter and a wife, myself with or without prostheses, all these experiences have a positive effect on my work.