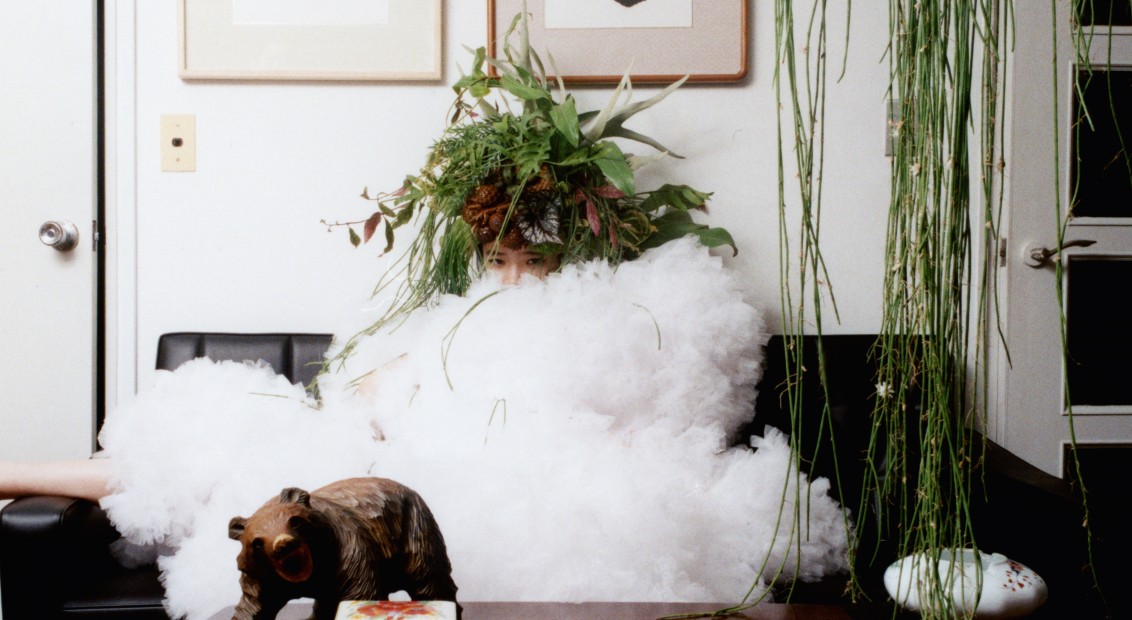 Building on the Japanese tradition of ikebana, flower artist and botanical pioneer Azuma Makoto shares an emotional relationship with all that grows. Cultivating flowers from every corner of the globe in his subterranean Tokyo studio, the transience of his living works reflect his devotion to their lifecycle.

From seedling to spoiling, Makoto nurtures plants as though they were his children. Beginning each day in the early hours when his telepathic communication with them is strongest, the ephemerality of his work reflects the Japanese concept of mono no aware, meaning “attraction to things that fade.”

Since opening JARDINS des FLEURS in 2002, an avant-garde Tokyo florist that better resembles a laboratory, optimising conditions with humidity, temperature and music, Makoto’s imagination has never waned. Entombing bouquets in giant slabs of ice that lined Dries Van Noten’s SS17 runway to floral masks and mossy headpieces that sprouted from models’ faces for Noir Kei Ninomiya SS20, his ethereal visions are distilled here in a collection of headpieces created exclusively for this feature. 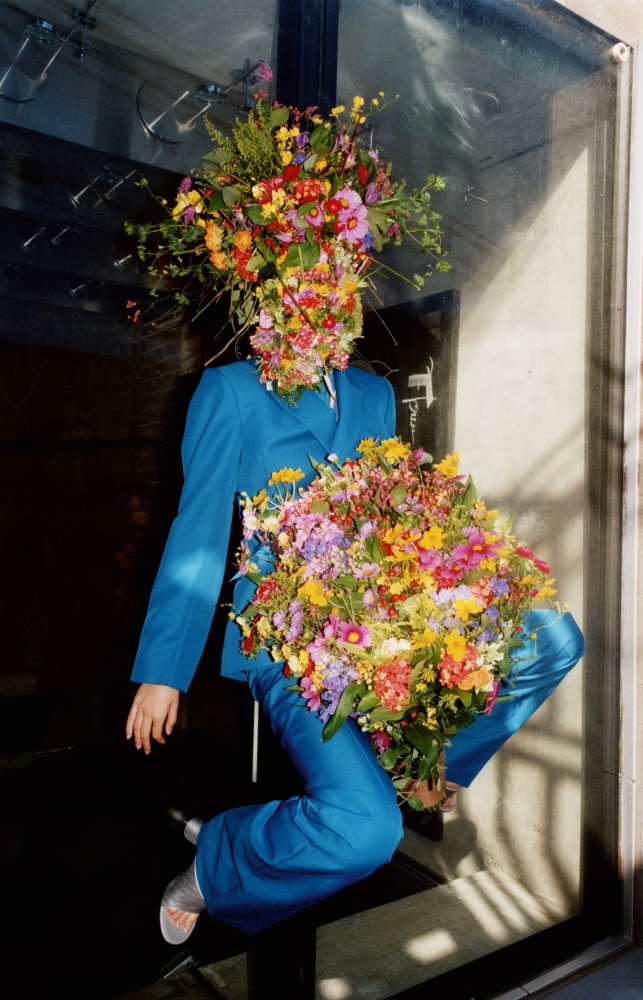 Itoi Kuriyama: When would you say you first became interested in plants?
Azuma Makoto: I started working part-time at a florist when I was in a band. It was then that I came across the beauty of plants for the first time and discovered sound and plants share a lot in common. Both are instantaneous and unique. There are as many different flowers as there are musical expressions and, like a plant, sound depends on the emotions of the player and the environment in which it is played. When I make art that incorporates music and flowers, I pair specific sounds with specific flowers.

IK: How did that evolve into flower arrangement?
AM: Since I began working at the flower market [Ota, one of the largest flower markets in Tokyo], I learned about the different care treatments and varieties of flowers on the job, there and then. I taught myself.

IK: Was it during that time you began working with flowers outside of your hours at the market?
AM: After working at the flower market, I started a florist in the corner of a supermarket and later set up a store in Ginza. As a florist, I had to build a relationship between flowers, customers, and myself but I became increasingly interested in pursuing my own personal relationship with flowers. At that time, art museums and galleries in Japan weren’t interested in an exhibition of flowers because they rot and give off a bad smell over time. That meant I went abroad to find places where my works could be presented and at the same time opened a private gallery in Tokyo for two years in 2007, which allowed me to continue presenting my works and developing my ideas.

“I’m aware that flowers are sacred and have life. It is most important to respect each flower, to feel the weight of life and incorporate it into my work.” 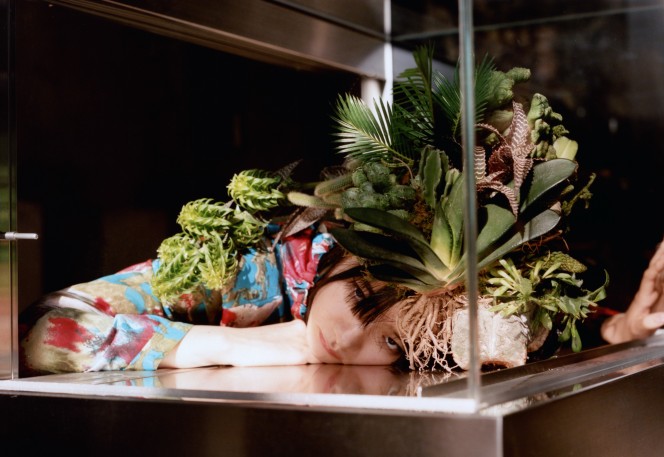 IK: What do you think about when you work?
AM: I’m aware that flowers are sacred and have life. It is most important to respect each flower, to feel the weight of life and incorporate it into my work. There are various life stages of flowers from buds to sprouting, blossoming, rotting and fruiting. Each is beautiful and precious.

IK: What inspires your work?
AM: All my inspiration comes directly from the flowers and plants themselves. Instead of exploring forms of expression, I place great emphasis on the physical encounter with flowers, which I do quietly, listening to their voice. That’s when I start to think how best to represent their expression.

IK: What’s your day-to-day schedule like? Do you have a set routine?
AM: I walk to work every morning. The slight seasonal changes I feel help sharpen my nerves and I spend 365 days a year touching flowers, face to face with them. Compared to humans, flowers are said to age ten years in a day and given my intimate and daily contact with them, I am able to sense even the slightest changes in their expressions and find their beauty. Beauty is hidden in those delicate changes that you might miss if you don’t see it every day – you won’t be able to see it unless you try to sense their voice. That is the charm of flowers and plants and I think the closer nature and people are, the more our contact with flowers will change.

“Compared to humans, flowers are said to age ten years in a day and given my intimate and daily contact with them, I am able to sense even the slightest changes in their expressions and find their beauty.”

IK: You’ve collaborated with Noir Kei Ninomiya on some unforgettable runway looks in recent years. What’s your process when working with him on shows?
AM: I have detailed conversations with him and make lots of samples to give him a more concrete visual image. Every time I look at his new work, I am inspired by what I see and often continue working up until the last minute. When I collaborate with designers or brands, I like to research their philosophy and design ethos so that my contribution can reflect it. I can’t work with someone who isn’t humble about flowers or who doesn’t consider their life and wellbeing with sincerity. I continue to receive various offers from within the fashion world and I am very grateful that many people are not only very interested in flowers but are actively seeking new forms of expressions for them. 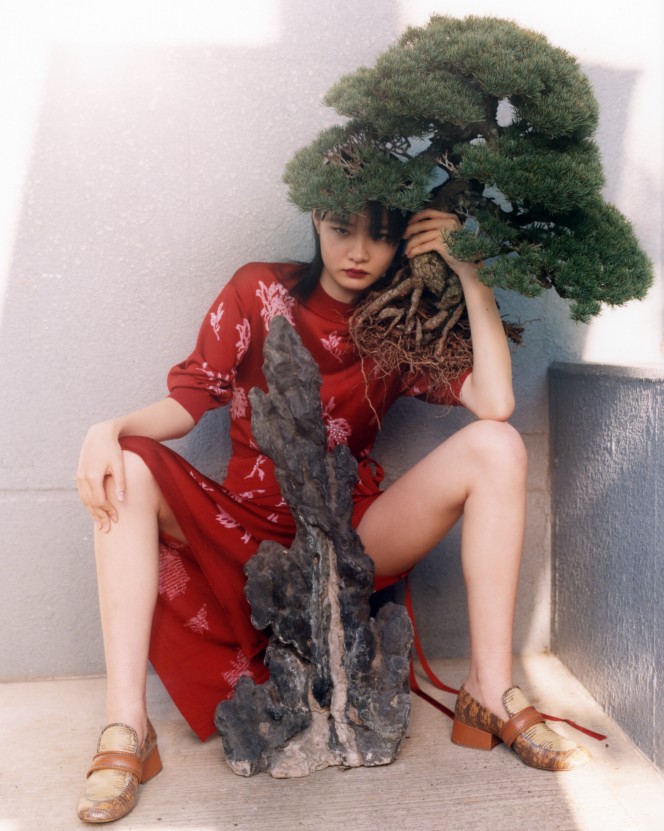 “I went to the Amazon in Brazil and it was quite a profound experience. The rainforest was filled with ferocious and intensely violent plants that are constantly battling for life.”

IK: What are you working on at the moment?
AM: I am working on a project called Botanical Sculpture, in which I visit various places around the world, using local flowers and plants to create huge flower sculptures that are about three to five meters tall. They are public sculptures that are often located in popular public spaces where locals can enjoy them. At the end of each installation we make bouquets and hand out them to the people. I consider this an art installation but also a journey to explore the fundamental bonds between flowers and people.

IK: You travel extensively but your studio is in Tokyo. What are the benefits of being based there?
AM: Ota Market in Tokyo is one of the best flower markets in the world in terms of both quantity and quality. I can find good flowers not just from Japan but also from Europe, South America and Africa. When it comes to sourcing special flowers and rare plants, I can get them from specialised farmers who also cultivate many different types of bonsai. I think that living in Japan, where each of the four seasons are especially beautiful, is a great advantage for those whose livelihoods are concerned with nature.

IK: Tell me about your recent travels to source exotic flowers. Are there any places that really stood out for you?
AM: I went to the Amazon in Brazil and it was quite a profound experience. The rainforest was filled with ferocious and intensely violent plants that are constantly battling for life. We couldn’t even deal with any beautiful flowers that were finally found because of the countless insects. If we were thirsty, we cut the trees and drank the water that flows through them. I really felt a connection to the ground I was stepping on and it proved a huge impetus to arrange flowers full-time. Later that experience became part of a work called Exobiotanica, in which we launched flowers into space.

IK: Is there anywhere else you’d love to visit?
AM: I will continue travelling the Earth, touching the flowers and plants of the land, following the expressions of flowers and transforming their beauty into something new with my hands. As long as there are flowers in this world, my passion will never end.