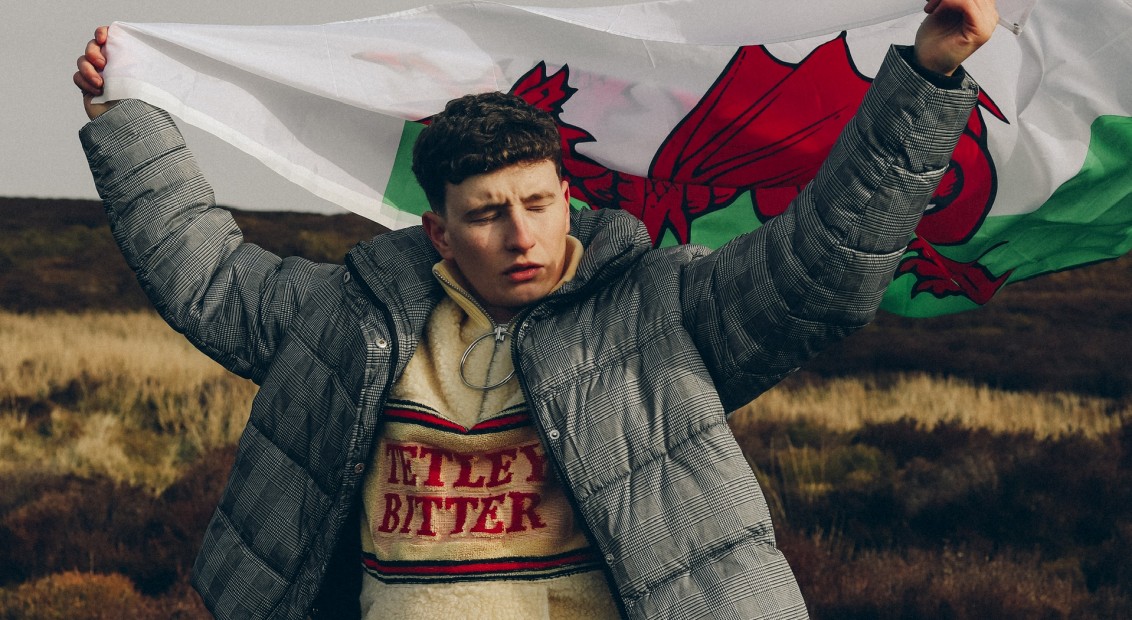 A pint a piece

A pint a piece

As a kid growing up in the tiny Welsh village of Froncysyltte, designer Adam Jones found creative solace in his nan’s dressing up box. “It’s like every cheesy young fashion designer says,” he laughs, recalling days spent trying on her fur coats and staging impromptu pantomimes – naturally, he played every character. “I would wear them with plastic fruit on my head, it was all a bit Grey Gardens! But we always used to draw together, so I guess that’s where my interest in fashion first started.”

Now almost 30, Jones is the oldest of three brothers – one a former cage fighter, the other a mathematician. He left Wales for university more than a decade ago, and now lives and works in London. By day, he manages 50M, a carefully-curated Belgravia store which stocks a handful of up-and-coming designers, as well as names like Liam Hodges and Claire Barrow. As for his evenings, they’re often spent creating vests, scarves and bags from found objects, most notably beer towels.

Jones does this all by hand, pulling the textiles apart and stitching them into new formations. If one goes wrong, it gets slashed and restarted. It’s a small-scale operation, funded by a combination of donations (he has a rolling GoFundMe), stockists and commissions – and that’s how he likes it: “I would never want to be huge, because big brands churn out so much,” he says. Before long, the conversation veers from anecdotes of his year in a fancy-dress factory to the joys of collaboration, and the need for fashion to strip back and slow down. 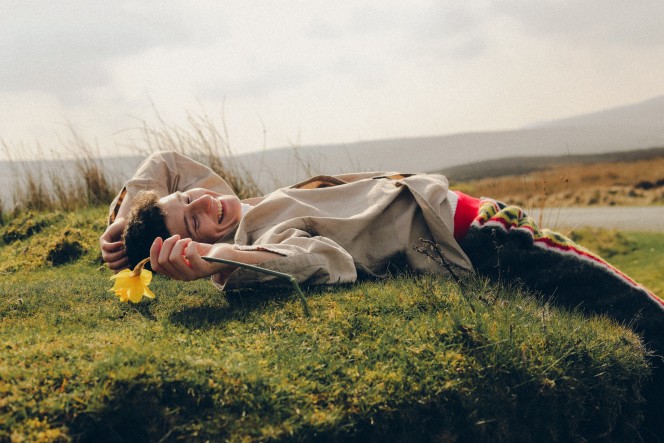 Jake Hall: How was it being a fashion-obsessed teenager in North Wales?
Adam Jones: You couldn’t get a fashion magazine anywhere. The best you could get was Hello!, so my grandma saved copies for me, and even the fashion bits were just Sienna Miller at an awards ceremony. I remember going to Milan when I was fourteen and buying my first Vogue. From that point onwards, mum bought that and GQ. She always went through first and ripped out anything too saucy.

JH: Did you study fashion at school?
AJ: I was too scared to take textiles in school, which is ridiculous really. It was that worry that people would think you were gay – which I am. I turned sixteen, and mum was trying to get me to study French and English at college. A week before the start, I said, “Fuck it, I’m doing fashion.” I did a BTEC, which was the best part of my education really. University doesn’t teach you anything practical, so I learned pattern-cutting and sewing in Wales.

JH: How was it moving from that to university in Manchester?
AJ: It was a big deal because I hadn’t really drunk alcohol or been clubbing before. But I don’t think my tutors believed I would go anywhere. I think they liked me, just not my work: I was kind of an outsider. 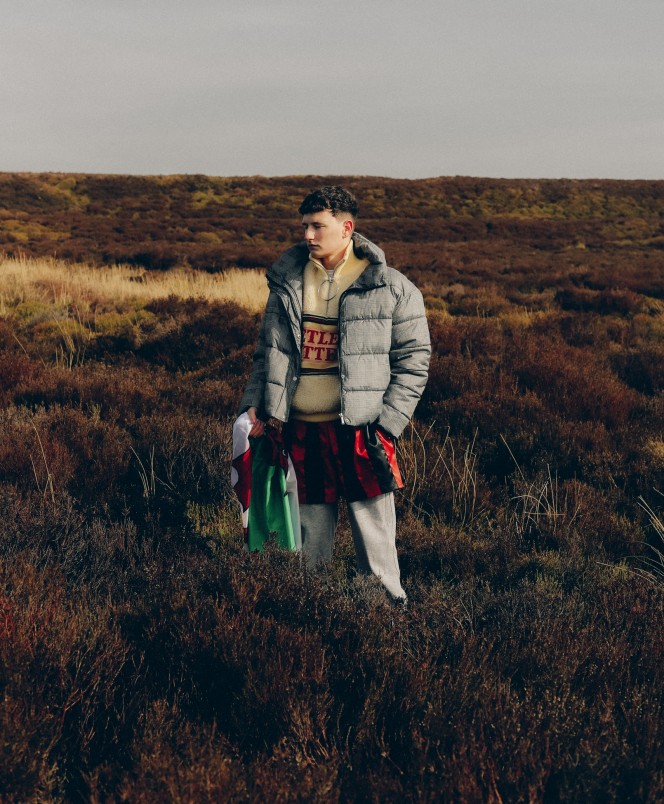 “I couldn’t get a job for about a year, so I moved back to Wales and got a job in a fancy-dress factory. That actually fucked up my sewing skills: I was churning out twenty ‘sexy nuns’ an hour!”

JH: Was it hard to move out of education?
AJ: I couldn’t get a job for about a year, so I moved back to Wales and got a job in a fancy-dress factory. That actually fucked up my sewing skills: I was churning out twenty ‘sexy nuns’ an hour! We had Frozen dresses, everything – such strange characters. I remember having to walk half an hour down the canal and then get two buses to this industrial estate. It was actually called Crazy Ladies, and it was full of these people on the fringes of society, but the factory gave them skills. I had a 60-pounds-a-month studio in Wales. I went there every day after work for a year to make my first collection, and then I told myself I would move to London. Which I did, in about 2015 I think.

JH: Is that when you started your own brand in earnest?
AJ: Yeah, I came here with the collection done, lived on a friend’s sofa for three months and showed at this pub I was working at. It was closed at the weekend, so the manager just let me have it for a show – I had ten models lying on the bar. Nobody really important came or whatever, but people borrowed my clothes for shoots and some others bought my stuff, like Judy Blame. He got me a job at Christopher Shannon, and I worked with Judy on a few projects, too.

JH: So, how did the beer towels become your signature?
AJ: My goal was always to use found objects. I worked with these leathers that had started peeling during the tanning process, so they weren’t fit for purpose, and I found removal blankets and building sites. A pub across from us closed down, so I found all these beer towels in the skip. I just remember thinking: “Oh, I like these!”

JH: I imagine there are specific challenges that come with only using found objects, right?
AJ: Definitely. Things can be stained or frayed when you buy them off eBay and sometimes they’re just not good enough. I don’t want it to look upcycled, even though it is – I want it to look clean, like there’s a large quantity of them. One-offs become a nightmare too, because you’ve got nothing to sell if you loan them for a shoot. I have to find as many towels as I can because I never know how many of something I’ll be able to make. But I like that, it makes things exciting. 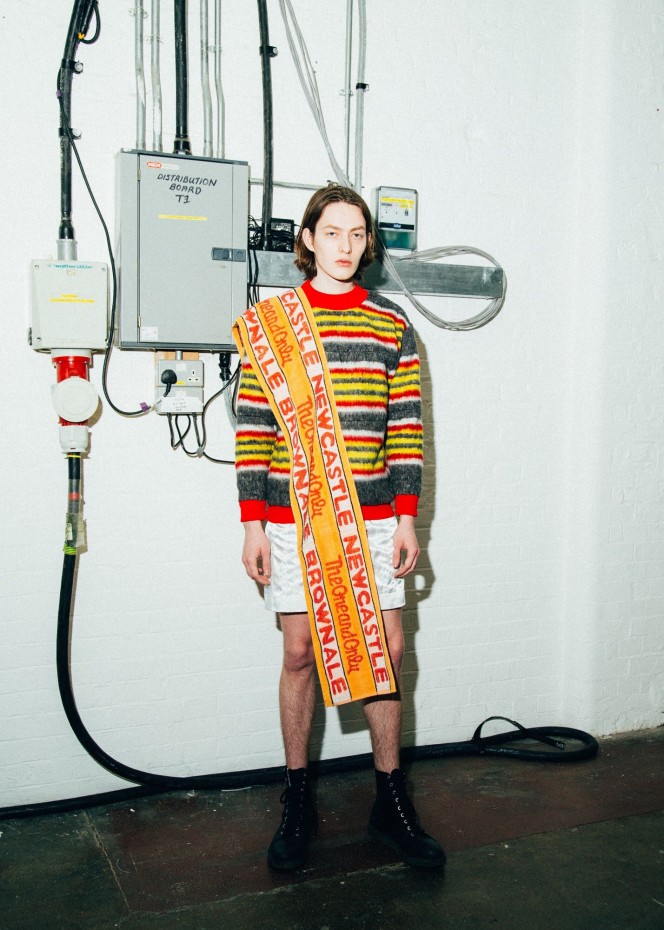 JH: You mentioned a lack of practical training at university. How did that factor in when you came to actually selling your work?
AJ: I’m still learning. I’m not business-minded really, so I’m just making it up as I go along. I don’t mind though, and I don’t mind having a job and this as a side project. I used to be obsessed with getting Fashion East or big stockists, but I want a lot less now. The landscape is changing, too. I find Nasir Mazhar really inspirational: he talks about creating market stalls, having people come to try things on and getting them made to order. I would love to create a space that’s open one day a week, where you can come for a drink as you try clothes on. I think we need to go back to those punk, DIY roots.

JH: Do you tend to accept a lot of personal commissions?
AJ: Yeah – I really love Instagram for that. These young kids message me, and because I don’t have many followers, I know who everyone is and I see what they’re doing. It inspires me, too. I love to collaborate with young photographers – Ellie Preston asked to borrow my stuff, and it was honestly the most epic, incredible shoot I’ve ever seen. Salford styling students have been borrowing it for their final projects, and some of the results have been amazing. I love to take risks, give the clothes to people and see what they come up with.

“I would love to create a space that’s open one day a week, where you can come for a drink as you try clothes on. I think we need to go back to those punk, DIY roots.”

JH: You always worked in pubs while you were making collections too, right – any free fabrics?
AJ: I did get aprons and teatowels, yeah. Pubs were a big inspiration because I really did grow up in these shitty working men’s clubs in Wales, but I needed to spend some time on the other side of the bar. I’m finally out of the pubs now – it took me five years! Now I work at 50M as store manager, and there’s only three of us. We have loads of one-offs and upcycled pieces, plus we welcome new designers – my work is stocked there, too – that I don’t think anywhere else would stock. Well, at least not yet.

JH: So, what’s on the cards for the future?
AJ: I just want to get my own studio, which is also a little hangout space and a stall. I do want to expand, but maybe that means just making one collection a year. It would be cool to make some objects too, like upcycled interiors. I really just want to create this whole world.

JH: People can use your GoFundMe to help with that, right?
AJ: I don’t know really, I find asking for money weird. I’m humble. People told me I should do it, so I just thought, “Okay, fuck it.” I see people from Instagram giving me a tenner because they see my work and like the shoots, which is lovely. It’s helping me to make my collection and fulfil orders, so it really has been great.

I think designers should be more transparent and honest about how they make money, too. I have no problem saying I work in a pub or in retail, and that ties into restock. If something sells in the shop, I’ll replenish it, but that could take two weeks or two months. All I know right now is that I love making everything myself: I’m enjoying myself, and I’m always proud of the results. 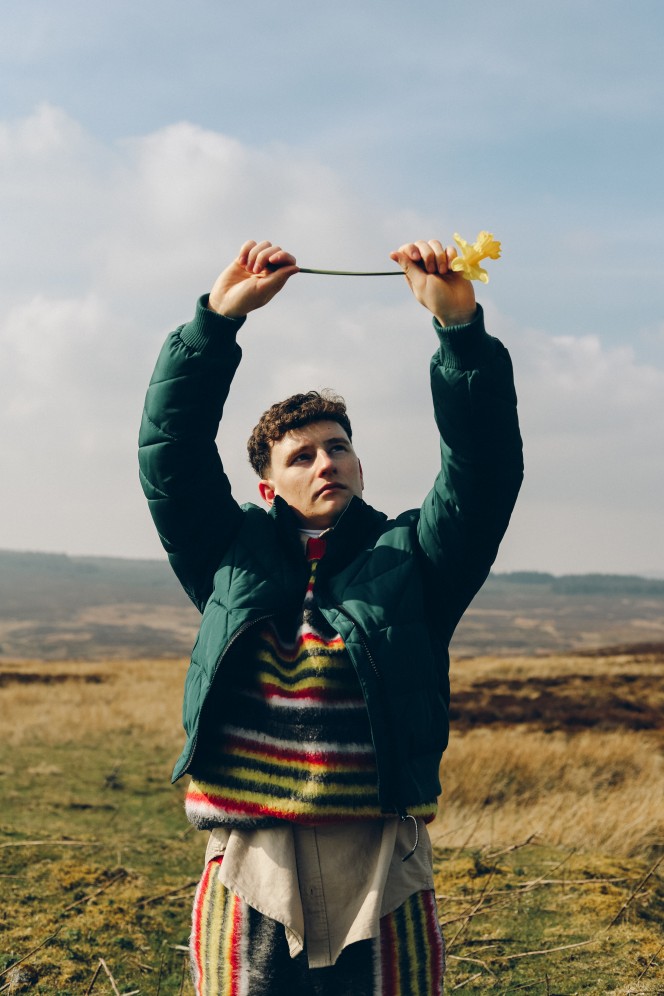 You can follow Adam on Instagram, buy his clothes at 50-M and donate to his fundraiser here.