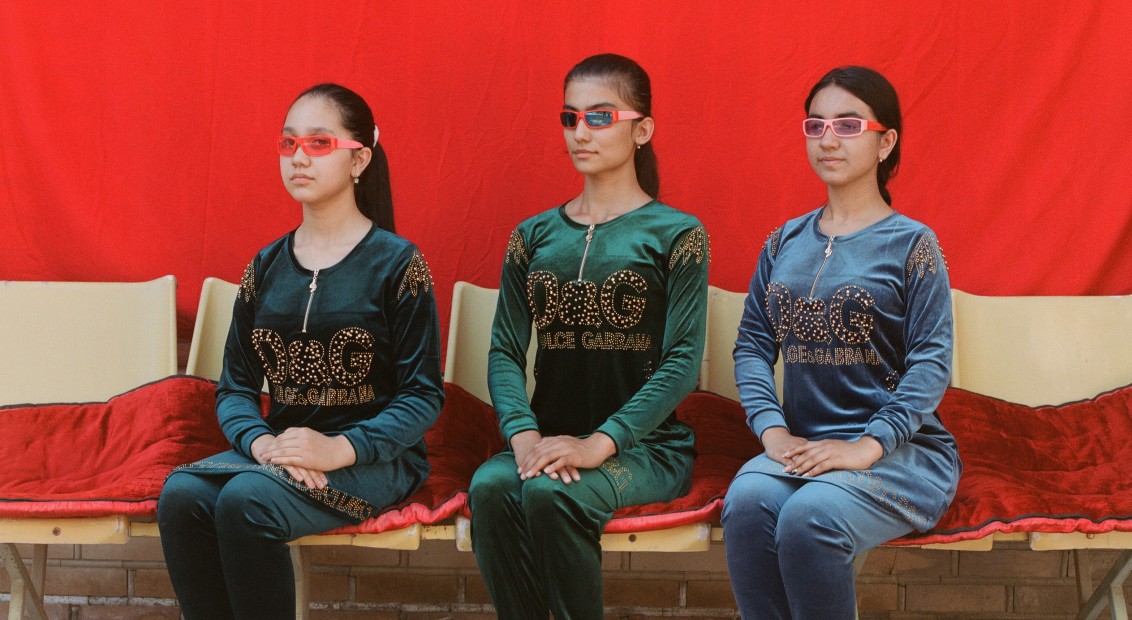 The Real Thing: an exhibition challenging the notion of ‘authenticity’ in fashion

Writer and curator Anastasiia Fedorova always had “some unexplainable gravitation” towards counterfeit clothes, especially while growing up in Russia. “My first memories of fashion were of those bootleg garments they sold at markets full of fake stuff,” she recalls. “I wasn’t really around ‘real’ fashion because my friends and relatives didn’t have access to it, but branding was still everywhere: on towels, furniture, everything! I remember seeing these symbols and understanding that they were important, and that people were excited by them for some reason.”

This fascination trickled onto runways a few years ago: from Gucci’s spray-painted bags to Vetements’ era-defining DHL t-shirt, designers began to engage with counterfeit culture in earnest. “Now, it was about questioning branding from inside of the system,” Fedorova explains. “I realised it would be a good time to start exploring these ideas.”

This initial research snowballed into The Real Thing, a comprehensive exhibition launched last week at London’s Fashion Space Gallery. Featuring an installation by acclaimed ‘brandalist’ Dr Noki alongside photography, art and fashion, the show forgoes the work of big brands (“they had that exposure already, plus fashion can be a very self-contained system”) and instead explores the “disruptive creative potential” of counterfeit.

It’s a carefully-curated, deliberately political exhibition, which questions the idea of ‘authenticity’ and asks a fascinating but loaded question: what is ‘real’, and what is ‘fake’? 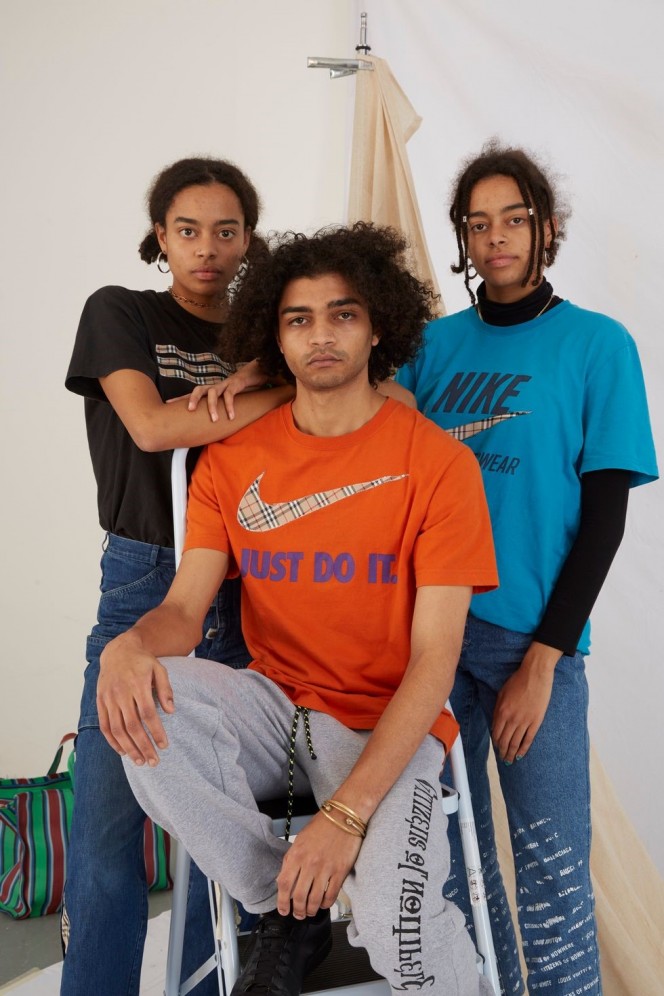 Jake Hall: Let’s go back to when brands initially started exploring counterfeit culture on the runway. What were your first thoughts?
Anastasiia Fedorova: I thought it was interesting as a language. It was this mixture of high and low culture, which makes you think about ownership – fashion is pretty exclusive, so I saw these disruptive ideas on the runway, and I thought they were cool. Sure, it’s questionable, but it was part of saying that fashion could be different, that you could mix up codes and reinterpret to make things less hierarchical.

JH: How did those thoughts inspire the exhibition?
AF: I became more interested in independent initiatives, artists who worked between different mediums and smaller labels and collectives, which maybe had a different agenda. Hypepeace is a good example: they use recognisable branding to raise funds. They send a percentage of profit from their sales to charities, and I think that’s probably the only project which does that on a systematic level.

JH: As in, they’re literally co-opting luxury symbols in order to redistribute wealth?
AF: Exactly. They recognised the power of hype culture and that they could channel it to do good. They did a project with Shukri Lawrence, a queer Palestinian designer whose whole practice is about working with branding because it’s an understandable symbol to a global audience.

He wanted to dismantle stereotypes of Middle Eastern youth by using branding, because everybody knows Gucci – everybody sees it, so it destroys this world of preconceptions because they’re seeing a familiar thing. He’s passionate about representation of queer people in his country, too. In these cases, artists aren’t faking something, they’re creating a language and using that to make things better.

JH: What was your curation process like?
AF: I think I just had a Google Drive full of links! Hassan Kurbanbaev is from Uzbekistan, and I saw his series by accident on Instagram. Roxman Gatt is a friend, so I knew about her BMW designs and had always wanted to include them. May Hands I discovered through another artist who was initially meant to be in the show, so I guess curation just came through conversations with people who help you expand your reach.

I wanted this to be geographically diverse, too. Of course, you could always be more diverse though – I think South Korea and China aren’t so represented, as I didn’t manage to find anything specifically about fashion branding. 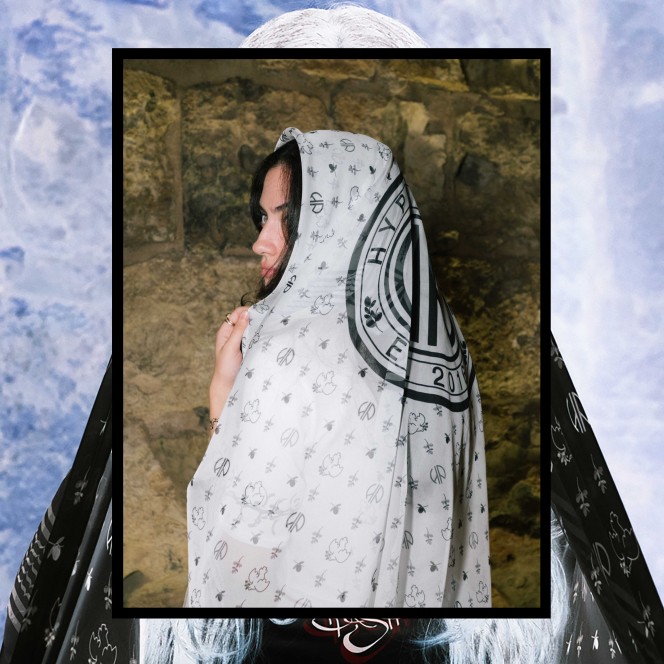 “…it was part of saying that fashion could be different, that you could mix up codes and reinterpret to make things less hierarchical.”

JH: You mentioned the idea of ownership earlier, which feels endless now we have social media. What’s your take on that?
AF: It’s difficult now because the idea is becoming more vague with online distribution of images. Who owns what? For the new generation, it’s a lot more fluid. I was thinking about face filters, and how you can take a Louis Vuitton flower and use it for anything, like it’s just an ornament that’s part of the environment around you. Fashion is so cyclical and self-referential that we’ll never be able to get away from that.

On the other hand, hierarchies exist. Sometimes, those creative ideas belong to an independent, emerging artist, or someone from a more disadvantaged community, but big corporations see their work as something they can take, use and make a lot of money from. It’s useful to remember who profits from the reproduction of these symbols.

The Gucci and Dapper Dan story is interesting here – he was called a ‘bootlegger’, but he doesn’t like that term.

JH: Because he feels like it delegitimises his work?
AF: Yes. When I approached his team, he sent a quote which ended up on the wall: “I didn’t do bootlegs or knock-offs, I did knock-ups.” I read his autobiography while researching, and if you think about it, his designs were 100 percent original. Even the technology he was using – screen-printing on leather – was unique and high-quality, but none of these brands wanted to engage with the black community. He was doing this back when luxury brands didn’t have menswear of that kind either, which is the standard now. He pioneered so much of that.

“Dr Noki’s work is in-your-face and disturbing, and a lot of it makes the point that our desire for brands is at the core of the environmental crisis we’re in.”

JH: That ‘knock-up’ idea ties into upcycling and sustainability, too. Can you tell me about the artists in the show which use that to comment on consumerism?
AF: I like the idea of hand-crafted bootlegs and DIY pieces – like Ancuta Sarca’s footwear. Then we have Citizens of Nowhere, which is a project about embroidering logos. The pioneer of this whole thing is Dr Noki, who’s been doing it since 1995. He takes discarded, branded textiles, cuts them apart and sews them in new combinations to change their meaning. A famous example was changing ‘ADIDAS’ to ‘AIDS’, to raise awareness of the crisis. Dr Noki’s work is in-your-face and disturbing, and a lot of it makes the point that our desire for brands is at the core of the environmental crisis we’re in. 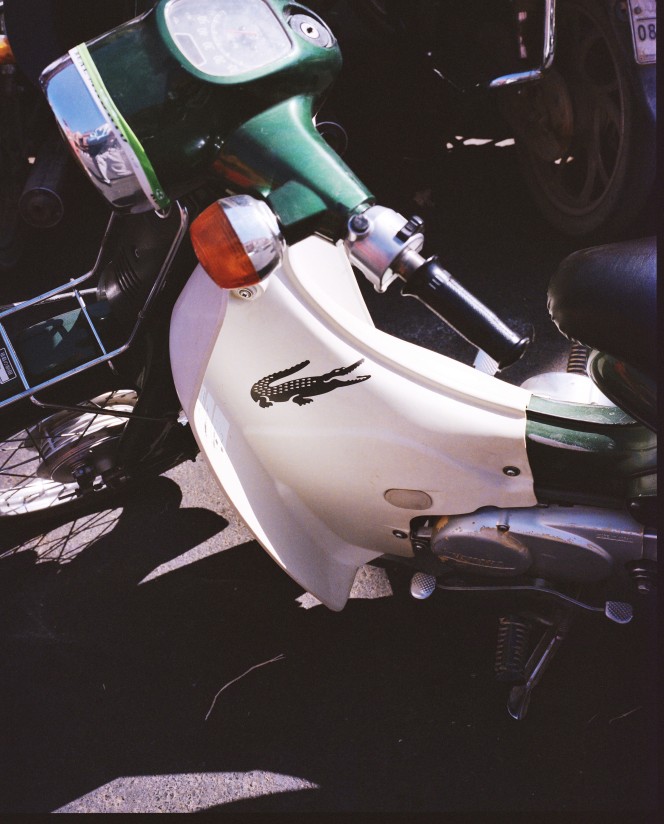 JH: Where do you think logomania in fashion is at right now?
AF: There’s definitely been a resurgence – fashion is going through a 2000s phase. I remember hating branding as a teenager, the idea of a Louis Vuitton bag was so distasteful. Russia was – and still very much is – about status, the fur coats and the bags. I was this moody, anti-establishment teenager – well, I wanted to be – so I was more into punk and DIY. I didn’t want anything to do with brands.

It happened in the creative community as well, when people wanted subtlety. The Margiela sweater with the four white stitches is the classic example.

JH: Although the message was still the same for insiders: I can afford to participate.
AF: Absolutely. I’ve only recently realised that, because of where I grew up, that kind of really ostentatious opulence is actually close to my heart – it’s an aesthetic that speaks to me.

“That whole duality between ‘real’ and ‘fake’ is just a social construct, and it’s often used by people in power to put other people down.”

JH: Definitely, although there can really be a class bias in those conversations, too.
AF: Anna Ehrenstein’s Tales of Lipstick and Virtue has so many elements, but it primarily examines that idea of ‘real’ and ‘fake’ in relation to social hierarchies and gender – like how people see women with nail extensions and judge them: “You’re fake!” But the message is that ‘fake’ can actually be an authentic expression of your identity.

JH: Is that what you ultimately want to achieve with this exhibition – to make viewers question this idea of ‘authenticity’?
AF: Labelling things as ‘fake’ makes you think they’re not valuable, so it can be really classist and sexist. Women in particular are always expected to act a little bit – you’re expected to perform your gender in a way that society perceives as ‘authentic’. But that whole duality between ‘real’ and ‘fake’ is just a social construct, and it’s often used by people in power to put other people down. I want viewers to interrogate these ideas – in fashion, in culture, and in life.

The Real Thing is currently on display at Fashion Space Gallery, and runs until 2nd June, 2020.