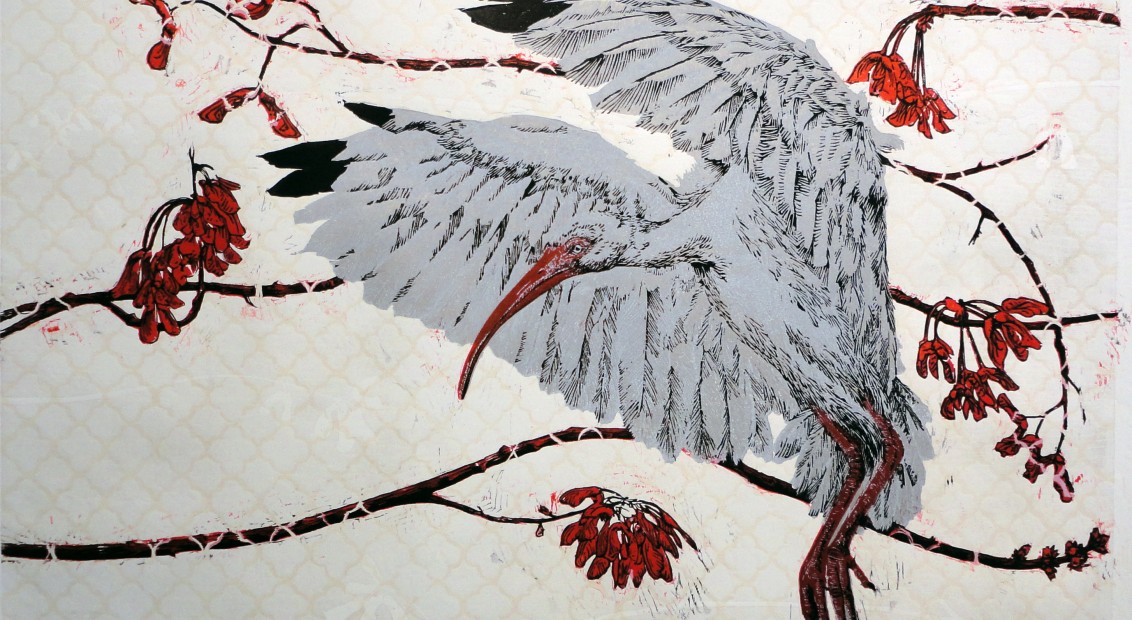 Set along the Mississippi Delta, the city of New Orleans has long been a cultural bastion of the Deep South. In the latest issue of HEROINE, we explore its thriving artistic community through the eyes of Andrea Andersson, curator of visual arts at the city’s Contemporary Arts Center. Having held the role for nearly five years, Andersson is well acquainted with local and regional talent and selected four contemporary artists working out of New Orleans who reflect its vibrant scene.

Working primarily with printmaking and woodcuts, the precarious ecology of Louisiana ’s swamps, cypress forests and bayous are reflected in Pippin Frisbie-Calder’s equally endangered choice of medium. An interest that began as a student with investigations into reef communities has grown to encompass all manner of wildlife along the Gulf Coast. From the majestic – Egrets, Spoonbills, Flycatchers and other birds of Audubon ’s collection, to the microscopic – including abstract renderings of phytoplankton, Calder’s art is also her activism, raising the alarm on Louisiana’s rapidly disappearing coastal habitats.

For her exhibition at CAC last year, Calder delved into the mythology of Louisiana’s fabled Ivory Billed Woodpecker, suspected, but not confirmed, to have been extinct for over 80 years. Cancelled Edition featured over one thousand woodcut, hand-painted prints of the bird, considered the Holy Grail of Ornithology, which visitors were encouraged to take home for a minimal fee. The bird’s disappearance is a tale of unheeded warnings and neglected responsibilities, and in emphasising the cost of those missed opportunities, Cancelled Edition is representative of Calder’s wider aim of ensuring the same mistakes are not repeated. 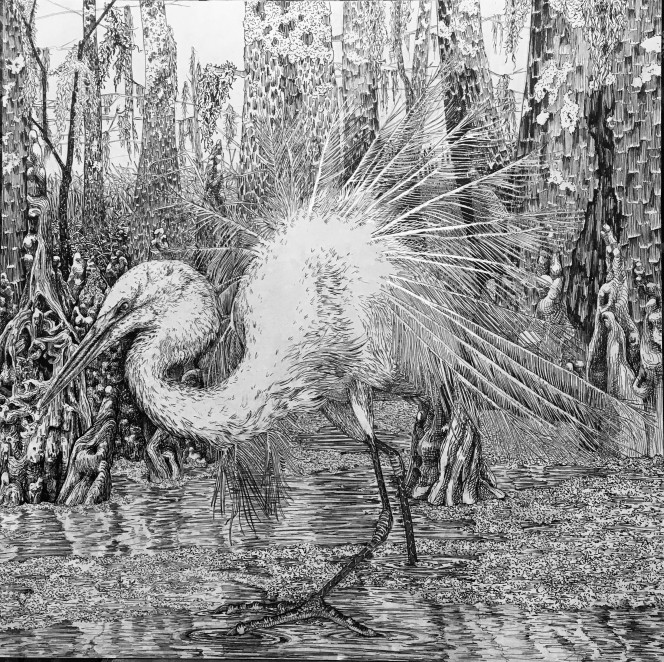 Finn Blythe: You mentioned you’re on a self-imposed artist retreat in Maine, how often do you do that?
Pippin Frisbie-Calder: I come up here every summer, from two weeks to a month. I bring a big woodcut with me and usually just sort of hunker down, make good food and work on one project. When I’m in New Orleans I’m very rarely working on less than four projects at a time, so this time in Maine allows me to slow down and focus.

Finn: What’s the landscape like?
Pippin: Oh gorgeous, rocky, coastal, not too different from the English coast in some ways but very sunny in the summer and much colder than England during the winter.

Finn: So you bring a woodcut up with you, what can you tell me about the process of woodcutting?
Pippin: The image I’m currently working on is an Egret in full breeding plumage. They have these beautiful long feathers during breeding season. It was in a swamp called Shellbank Bayou which is in the Maurepas Swamp of Louisiana and one of my favourite canoeing spots. I draw it onto a block of wood and then go over it with my carving tools.

Finn: Do you have a preliminary sketch or photograph that you work from?
Pippin: I’ll usually do thumbnail sketches for composition and lay-out but when I actually go to make the drawing I do it directly onto the block because I feel like it allows for fluidity. When things get transferred from a drawing directly onto another drawing I find it stiffens everything. I like to go straight onto the block which is a little scary because if you mess up you have to start over, but in the end I think it looks better. Then I carve everything out, except for what I’ve drawn, and then those marks receive ink. I use oil-based ink which I roll over the surface and then, using big, heavy presses where I teach at Tulane University, I transfer the ink onto large sheets of paper. 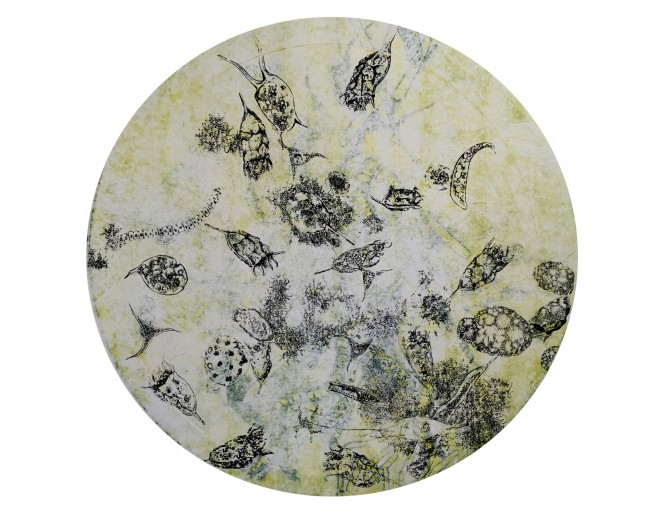 Finn: How did you get into it?
Pippin: A few things really. My mum’s a printmaker so I grew up with an appreciation and exposure to it. I’ve also always loved communal art, I prefer to work in collaboration with others and so printmaking has that inherently woven into it because of the need to have these huge presses and a lot of facilities that other art forms don’t. In recent years I’ve been doing a lot of environmental work and I started to see an interesting way of talking about endangered environments through an endangered medium.

Finn: Were you raised in Louisiana?
Pippin: Kind of, my parents were very nomadic. My mum’s an artist, my dad’s a writer, so I was born in Louisiana but we grew up sailing for half my life. We’d sail all around Central and South America and then spend part of the year in Maine and part in England.

Finn: Do you think that travelling had an influence on what stimulates you as an artist? I saw you’ve had residencies in Haiti and Indonesia.
Pippin: Definitely. Anytime I’m not teaching I’m trying to travel as much as possible. It’s definitely given me a more global view, like in Louisiana we have some of the fastest disappearing land in the world, every 90 minutes we lose a football field of swamp. Travelling has given me a more international perspective on threats faced elsewhere.

Finn: From swamps to mangroves and bayous, the landscape of your work feels like a quintessential part of New Orleans and Louisiana. How would you describe it to someone who’s never seen it?
Pippin: Interesting. For me it’s a little like Jurassic Park. You go out in the swamp, with these enormous root bodies coming out the water and prehistoric-looking cypress trees. On a good day you’ll be surrounded by alligators and these enormous birds. Sometimes you’ll see a Roseate Spoonbill – they’re the colour of a flamingo with these spoon-shaped beaks, I once saw a flock of around 70 take off simultaneously and the whole sky turned pink. So there’s this feeling you’re able to enter worlds before we completely destroy them.

“It’s a little like Jurassic Park. You go out in the swamp, with these enormous root bodies coming out the water and prehistoric-looking cypress trees. On a good day you’ll be surrounded by alligators and these enormous birds.”

Finn: You’ve studied the environment on every scale, including the microscopic for World Within, where you worked with Tim McClean [Microbiologist at Tulane University] putting water samples under the microscope to make these surreal, abstract works. Who initiated that collaboration?
Pippin: That was A Studio in the Woods, which is a New Orleans-based residency for artists and scientists to work together [located on an eight-acre site of endangered woodland on the Mississippi River bank]. I just found out yesterday that I received their newest version of that residency, called FATHOM: Volume I, so I’m going to be working for a year with a couple different scientific groups creating a series of installations and art pieces about the relationship in Louisiana between the mockingbird and lead exposure.

Finn: Tell me about that.
Pippin: There ’s been a number of recent studies into mockingbirds which have uncovered that abnormally high lead content in New Orleans’ soil is changing the behaviour of mockingbirds, who become more aggressive and change their songs. So it’s about the birds and it’s about the lead but it’s also the canary in the coal mine where it’s warning us of larger environmental issues facing Louisiana.

Finn: Last year you had your solo show, Cancelled Edition, at CAC. Aside from putting on exhibitions how does the CAC support the New Orleans artistic community?
Pippin: New Orleans is a relatively easy place to get started as an artist. There’s a lot of art markets and little ways you can make money, but because there’s only really the CAC, The Ogden and then the New Orleans Art Museum, there are very few opportunities to break into the larger, national art market. The CAC provides more of that opportunity than anywhere else in New Orleans. The Ogden has an Open Call, but the CAC does that and has big shows for local, emerging artists from New Orleans, in addition to doing the kind of Louisiana Open Call shows. Andrea [Andersson – Chief Curator of Visual Arts at New Orleans’ Contemporary Arts Center], is willing to take risks with emerging New Orleans artists and give them that really important first step. You need someone to take a risk in order to elevate you to a platform where the rest of the nation can look at your work. 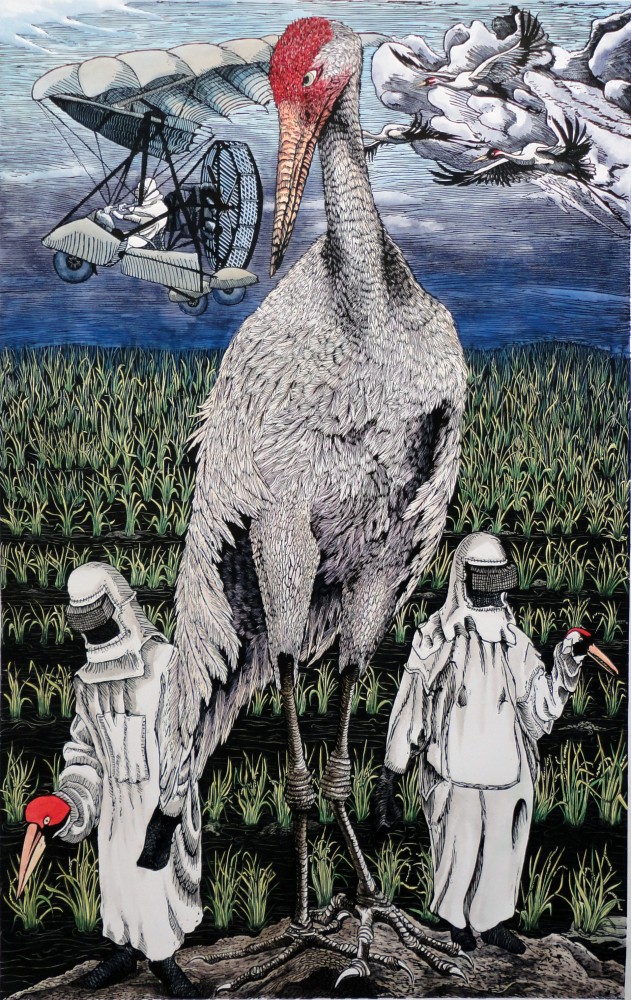 Finn: What can you can you tell me about the Ivory Billed Woodpecker? What attracted you to it? I gather it’s been extinct for the past 80 years.
Pippin: Well that’s part of its allure; it ’s still not listed as extinct. They think it is but can’t prove it. Plenty of people have made it their life goal to find the last Ivory Billed Woodpecker, so they refuse to believe it’s extinct even though there hasn’t been a documented sighting since the 40s. They’ve almost become mythical. It’s a huge woodpecker that used to be all over the Southern states and because of that and their beautiful plumage they were called the Lord God bird. Their last known breeding ground was bulldozed before anyone could stop it. For me it’s a really good narrative about missing those moments in environmentalism to save a species.

Finn: On the topic of extinction, there’s a quote from Mike Tidwell on your website in which he’s discussing the southern Gulf Coast and describes it as a place where, “Beauty and death are inseparably bound.” What’s he referring to?
Pippin: I think on one level he’s talking about the natural environment. This incredibly diverse ecosystem in which things are constantly dying, decomposing and fuelling other things, which creates these naturally occurring cycles. Death and life is a constant state of the swamp. He’s also talking about Cajun culture, which is very much connected to the land and harvesting the land, for lumber mills and for fisheries. The Cajun culture is also deeply tied to the swamp but then in recent years, with the oil industry, a lot of Cajuns also got into working for the industry because it’s finally this opportunity to make some real money and support your family. But it’s predicted the oil canals and dredging in New Orleans are responsible for potentially 90 percent of coastal land loss. So there’s this idea too: that the people who are most connected to this landscape have also been participating in an industry that is most responsible for destroying it. It’s a really complicated relationship between man and nature that happens everywhere but is particularly tangible in Louisiana.