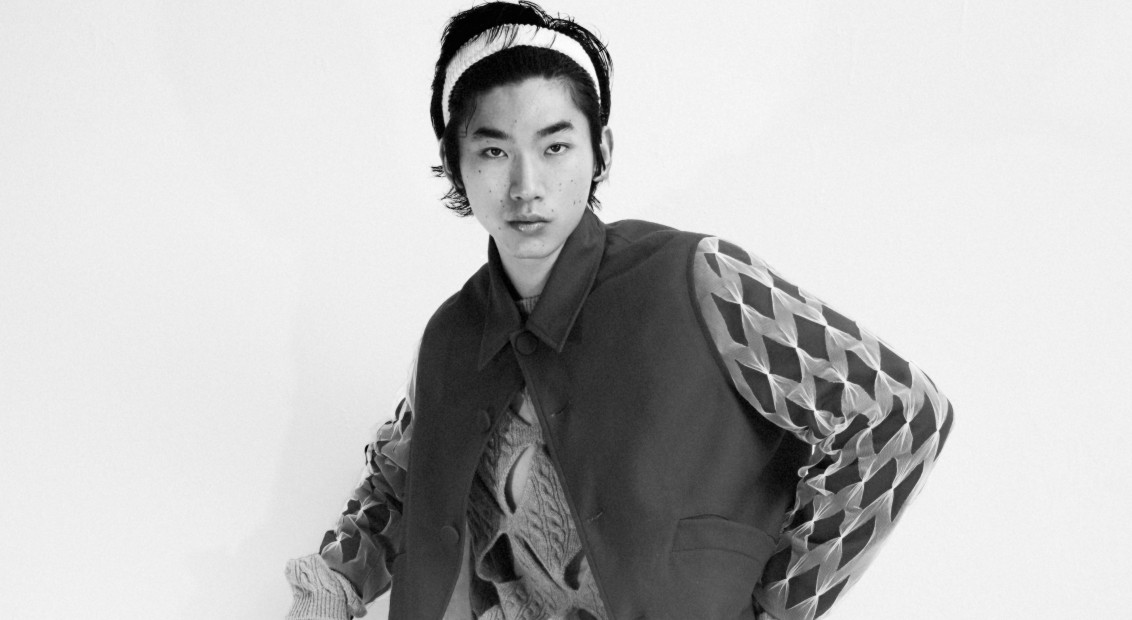 To describe SS20 as a landmark season for Stefan Cooke and his long-term partner Jake Burt would be an understatement. For the previous three seasons they’d shown under the prestigious Fashion East umbrella, but SS20 marked their debut standalone effort, their first chance to really manifest the world of their shared label.

Guests took their seats in a room strung with washing lines that were weighed down by crisp, white bedsheets to create “the most domestic version of a theatre set.” The collection itself was inspired by a visit to theatre costume archives in New York; sartorially, these references played out in a romantic fusion of their signature codes – trompe l’oeil prints, diamond-cut knitwear, the aforementioned bag straps – and nods to the past, like lace-up corsetry detailing on coats and patches of hand-tied tulle on t-shirts. 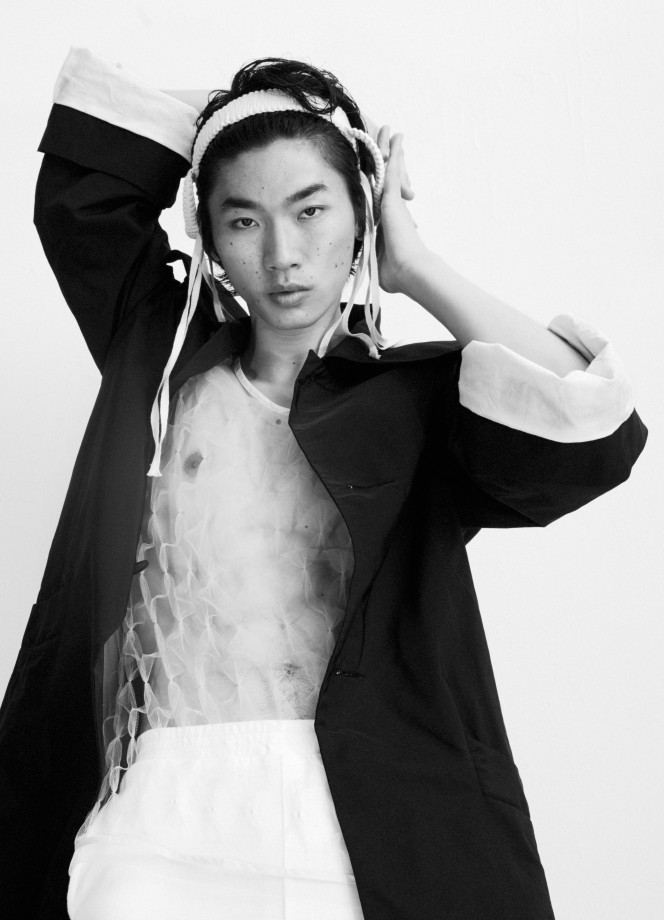 “We’re always self-referencing,” says Stefan of their design aesthetic. “I had done trompe l’oeil – basically printing images of clothes onto other garments to trick the eye – in my MA, but back then I was photographing leather jackets and then returning them afterwards! This time I wanted to print these beautiful, incredibly-made clothes onto the simplest jerseys. I wanted to make them accessible.”

This element of accessibility is important to the brand, but to the designers as well. “We don’t have money or resources, so creativity is the only way to make our business sustainable,” explains Stefan. He was raised in a Crawley council house alongside eight other siblings, whereas Jake grew up in Somerset with parents, “who weren’t very good at working for other people – they set up various businesses throughout my teenage years, like a furniture shop.”

A mutual friend introduced them at university, where they quickly bonded over a shared love of Tumblr and cult designers like Undercover, Junya Watanabe, Martin Margiela, Walter van Beirendonck (Stefan later interned for him – “it was so incredible to be sat there in his archives!”) and Olivier Theyskens. “We’re die-hard fashion fans,” laughs Jake, “complete nerds! Whenever I interview an intern I ask their favourite designers, and what shows they’re looking forward to. Our creative process is one big conversation and we really reference every designer. That’s the language we speak.”

“They’re two of the most important fashion concepts to have ever happened,” gushes Jake, before Stefan draws attention to a beautiful, entirely-embellished jumper draped in a dustbag. “We always design with the pedestrian in mind and we’re really inspired by [now-defunct Japanese street style bible] FRUITS, but we do have showpieces like this, which took three weeks to make. One store bought them, but we were like, “Oh my god, we can’t do it again!” It would have involved remaking the whole thing and finishing it properly, which isn’t really our market. But it’s still a cricket jumper at the end of the day; there’ll always be that element of use.” They’ve toyed with the idea of selling these gems in limited runs, but for now they remain exclusive to the runway.

“We don’t have money or resources, so creativity is the only way to make our business sustainable”

Like Margiela, they are design magpies foraging gems for their own collections. “I remember going shopping with my mum when she had no money, so we went to charity shops all the time,” recalls Stefan. “I used to be embarrassed, but thank god she dragged me – you see the treasures and the worth in those clothes. The perspex bags came from that really; we wanted to elevate these pieces you could buy for about £10. It takes an incredible kind of person to do that.”

These creative intuitions have earned them acclaim after just four seasons, but despite seven years in full-time fashion education, neither really knew how to monetise their vision. The brand has received support from the BFC, H&M, NEWGEN and Fashion East, but translating this into a business involved a new way of thinking. “Nobody taught us how to write an invoice – [fellow menswear designer] Kiko Kostadinov had to literally teach me to cost our collection via text,” laughs Jake. “We were on our way to Paris for our first season showroom, and we were like, “Kiko, what’s the mark-up? How the fuck are you supposed to make any money?!”

Business has been their steepest learning curve. At one point they ran out of cash for production, delaying orders and almost derailing their careers entirely. “We didn’t realise this would grow so quickly,” Jake reflects, saying they’re keen to resist scaling up too quickly. “The value of money changed so fast for us, and that was really scary. One minute you’re thinking in tens of pounds, next it’s hundreds… Before you know it you’re invoicing for thousands, but you’re not really seeing that money. There would be times where friends were like, ‘You’ve lost weight, are you dieting?’ The truth was that we could barely afford to eat.”

It’s a common story – and diet – amongst student designers, who often foot extortionate bills to create their graduate collections. Stefan recalls being accepted onto Central Saint Martins’ prestigious MA course and subsequently calling his dad in meltdown mode, “I didn’t attend my first day because I literally couldn’t afford it! Luckily I ended up getting my fees paid for me, but that was conditional to performance reviews. I think that’s the first time my family realised what a big deal this was. I worked four days a week at uni; I wasn’t picked for the press show, or the scholarships, so this was the first time I had any kind of financial help really. It was the first time I felt fully able to involve myself in fashion.” 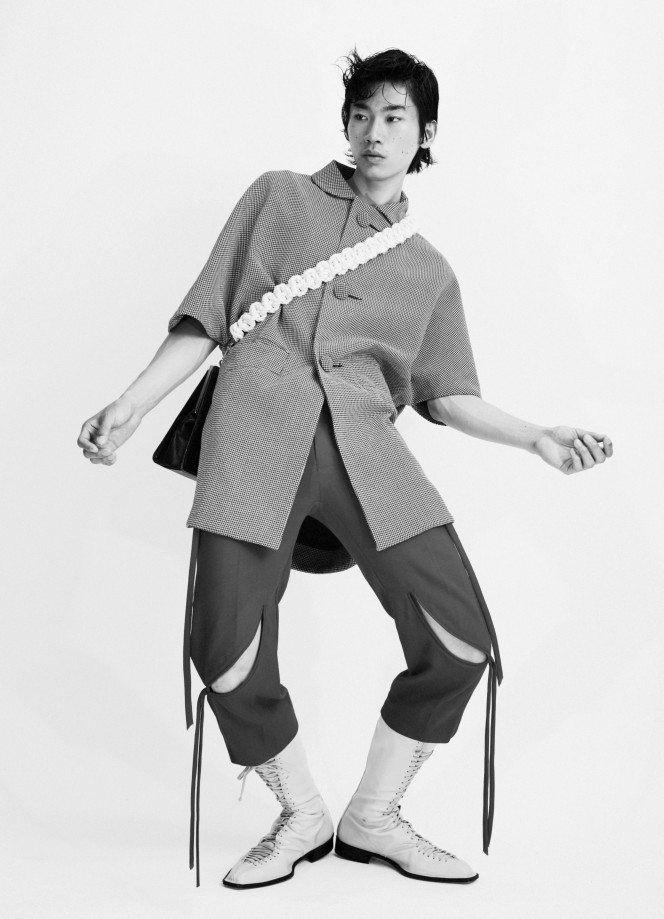 “I remember going shopping with my mum when she had no money, so we went to charity shops all the time…”

Despite support from behemoths like Vogue (they made the magazine’s SS20 round-up, one of only two brands which weren’t also advertisers), they admit battling with imposter syndrome. In fact, it’s written across SS20. “Have you read The Secret History by Donna Tartt?” Jake asks, describing it as a hidden inspiration for the season. “It’s about a boy who doesn’t come from wealth, he goes to uni to escape his family and ends up being invited to study with elites because he’s naturally good at languages. He pretends to be from that same wealth, so he buys old uni clothes from the thrift store and tries to make them look expensive. His biggest fear is being discovered.”

This idea of elevating basics to luxury status permeates their work, but the story is a metaphor for their own feelings as designers. “It’s amazing how people perceive you as a brand,” says Stefan. “There’s an idea that because you’re being flown to New York or putting on a high-level show, you must be making so much money. In reality, we still share our student flat with two flatmates because it’s so cheap.” Still, these occasional industry trips show there’s real industry belief in their vision – “and thank god for that!”

As the seasons pass, this support is enabling them to iron out creases in their business plan. They’re getting better at costing, each collection is more cost-effective to produce than the last. A move into womenswear could even be on the cards – but only if it feels organic, and doesn’t feed into the sometimes reductive conversations around gender which dominate the fashion industry.

“We’re always asked what our work says about masculinity,” says Jake of the questions they regularly field. “We’re so beyond thinking about whether a piece is ‘too feminine’ or whether men should wear skirts, it’s a conversation I really can’t believe is still happening.” In a sense, their work pokes fun at this – one bag stemmed from the tongue-in-cheek idea “of a guy holding his girlfriend’s handbag at arm’s length while she’s in the changing room!”

However, they outline that expanding ‘the gender conversation’ to all designers can be damaging, doing so can position queerness as an aesthetic fad for mainstream consumption (“we aren’t doing any of this for a bunch of straight people to understand”), and it can overshadow the work of vanguards like Art School, Gogo Graham and Vaquera, whose collections deliberately aim to subvert gendered norms. “We always reply with a list of those designers,” says Stefan, frustrated. “They’re the ones making that amazing work; why should we, as two gay men, step in to infringe on that conversation by screaming ‘yeah, but look at our thing?!’”

That’s not to say they aren’t progressive; they simply design beautiful menswear without restrictions. Jake explains that he used to wear dresses and skirts purely because he wanted to, and says that even now, “straight men are wearing things that I would have been punched in the face for wearing as a teenager.” It’s not about subverting gender though, it’s about moving past it.

“It’s about a boy who doesn’t come from wealth, he goes to uni to escape his family and ends up being invited to study with elites because he’s naturally good at languages.” 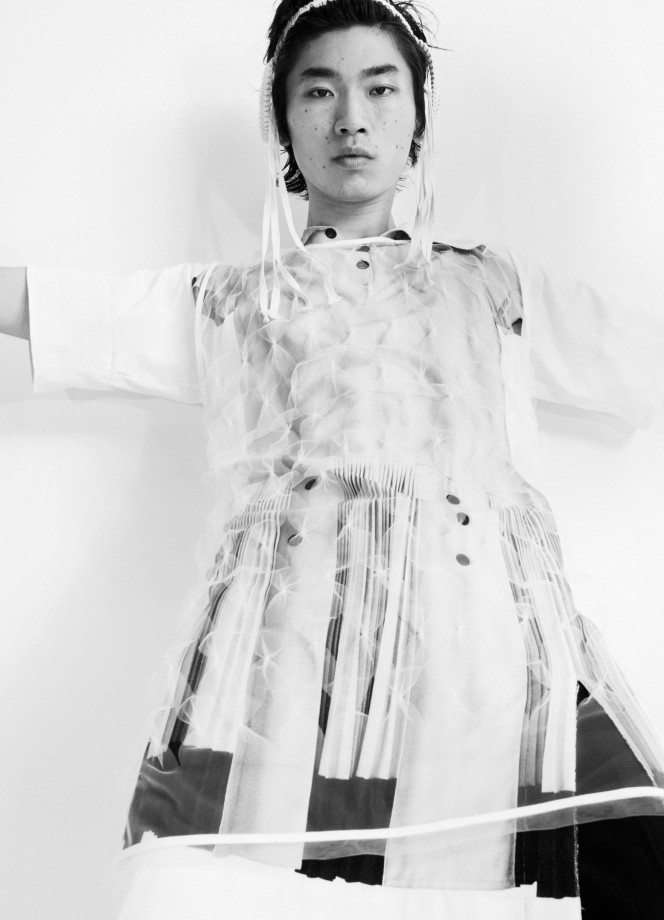 From their perspective, the best way to make a change is to collaborate with and pay trans and gender non-conforming artists, like Mountain, who did the printwork for their SS19 collection. This ethos of promoting other creatives permeates their brand; they namecheck collaborators past and present, like stylist Gary David Moore (“he elevates our show so much”), footwear designer Marko Bakovic and TD-Kent, whose eyewear added the finishing touch to their SS20 aesthetic.

As Stefan returns to threading lacquered buttons through heavyweight chainmail (soon to become one of their signature embellished bag straps), the pair describe feeling lucky to be able to work with and pay their friends, and currently have their sights set on hiring a team to manage the business and allow them to channel their energies into pure creativity. “We really shouldn’t be handling production or finance, because those aren’t our strong points,” says Jake. In their own words, they’re making things up as they go along.