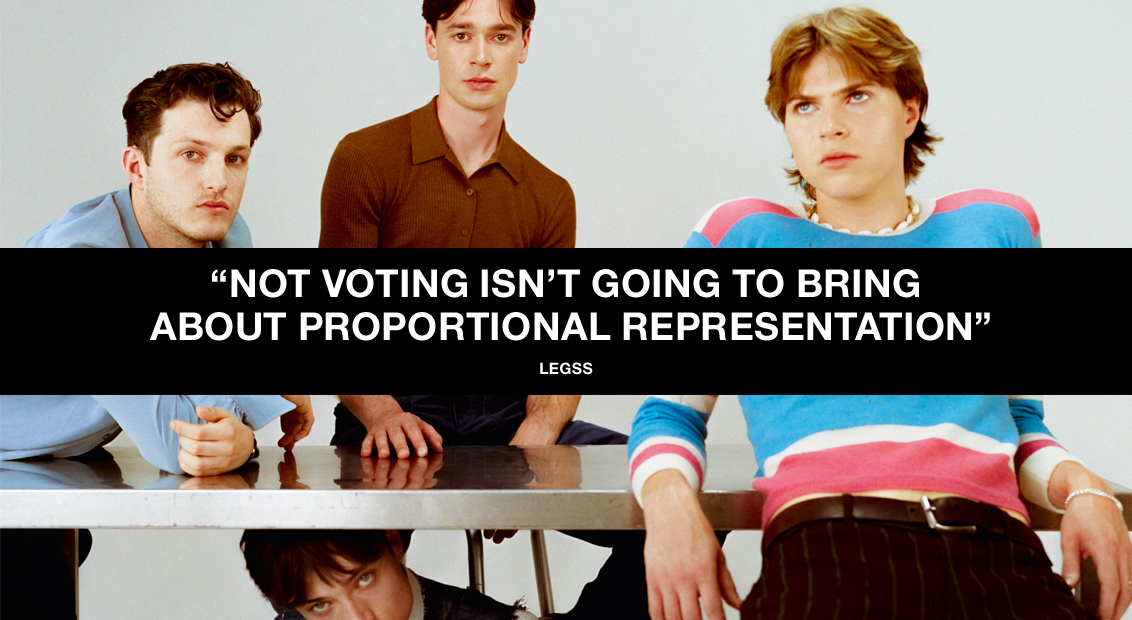 Legss‘ recently released debut EP, Writhing Comedy, showcased the quartet’s aptitude for social commentary. Amongst collaged sounds of city life, dial tones and exasperation, frontman Ned Green introduces us to a series of characters (in every sense of the word) via monologues, expressive prose and overheard conversations – such as a jobsworth security guard and Peckham’s repressed residents.

“[We’re inspired by] people who’re able to make everyday situations come to life and critique societal problems and make light of them in a poetic manner, so Roger McGough, Dylan Thomas…”

Masters of setting observation to wax, these urban soundscapes paint a vivid picture of today’s Britain – from the broken to the banal. With the UK General Election 2019 on the horizon, Legss’ Ned Green offered his view on the country’s current situation, how he’ll be doing his bit to help reverse our current disastrous direction and why he’s heeding the advice of the legendary Edwyn Collins.

How will you be voting in this election and why?
“I’ll be voting Labour for a number of reasons. Principally because Labour as a party is trying to do something transformative with their manifesto, in a way which will benefit a wider majority of people in our society. Tory austerity politics are failing the British public in that the systems we all rely on (NHS, social housing/private letting, a national minimum wage, law enforcement and education) have been stretched to breaking point. More locally, I’ll be voting for my MP, Vicky Foxcroft, because I’ve seen first-hand the benefits her work has had on local businesses in my area.”

Why is it so important for young people to vote?
“Party-stance aside, it’s important for all people to vote, young and old, so that our voices can be part of the decisions being made in parliament. Your vote can have a direct link to the betterment of other people’s lives nationally, and the MP you vote for in your area can have a much more noticeable impact locally.

However, I completely sympathise with how difficult it is for people to believe in voting as political practice because of how elections throughout the 2010s have done little to bring about solutions or truthful returns on policy (Lib Dem’s in 2010…ahem…). But not voting isn’t going to bring about proportional representation or a different kind of democracy; it isn’t going to empower you in some idle conversation in a pub; it isn’t radical.

In terms of a younger demographic, though, the outcome of the 2017 election showed that 60 percent of voters between 18-24 voted for Labour, so, for my party, I’d obviously prefer to get more young people on board for that reason!”

“Party-stance aside, it’s important for all people to vote, young and old, so that our voices can be part of the decisions being made in parliament.”

How do you feel the outcome of this election impacts your peers in your industry? And more broadly, our generation?
“The main impact that a Conservative minority government has had on people working in the arts and music since 2010 is exemplified in the drop in government spending by £165m since they came to power. If the election goes their way then this negative amount will only increase, and the curriculum on offer to primary, secondary and university students will continue to become narrower.

They’ve also made it very, very fucking difficult for someone to go freelance in their chosen artistic practice. Fixed career paths and full-time jobs in the arts are becoming incredibly difficult to come by, especially for recent graduates, and thus many are turning to freelance (and inevitably more precarious) roles. This has become an increasingly popular trend in the past decade, with freelancers now contributing around £145bn a year to the UK economy. So where are freelancer’s rights? Why are they not being given support in learning how to receive money and follow tax laws correctly? Where is their protection in times when a job falls through for no legitimate reason? Generationally, I’ve spent the formative period of my youth studying, practicing and working under a Tory government and I, along with the majority of my peers, are tired of it.”

“Brexit is clouding what the election should really be about: reversing the cuts to the institutions and services that the majority of British people rely on.”

What are your priorities in this election?
“Not Brexit. Why Corbyn is being lambasted for having a neutral stance on Brexit when his policy is to offer the possibility of a second referendum is baffling. He is preparing to respect and fulfil the public decision made on that potential referendum, rather than comply to the undemocratic outcome of the first and ‘take a side’. Brexit is clouding what the election should really be about: reversing the cuts to the institutions and services that the majority of British people rely on. Introducing a national ‘property MOT’ for exploitative landlords is particularly a corker!”

Anything else you’d like to say on the subject?
“Fuck the polls, vote tactically where possible to de-seat the Tories, and heed what Edwyn Collins of Three Cheers For Our Side fame recently announced on twitter: “The Tory? I shit on them!!!!””