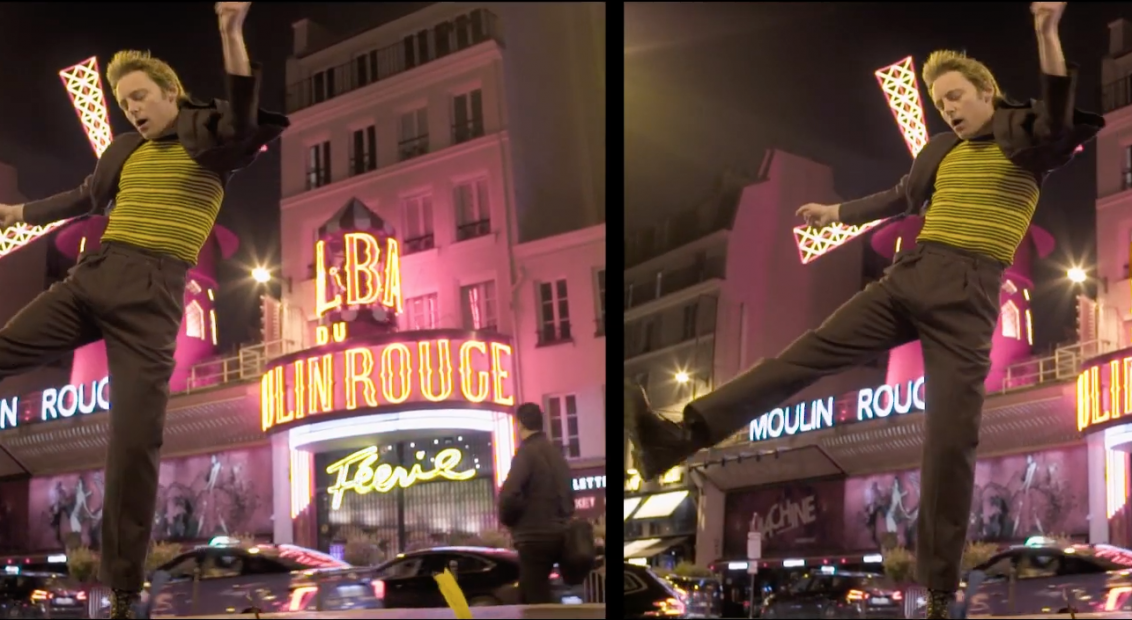 A tale of lopsided romance in Biarritz: Dan Lyons on his new video and debut solo record

Welcome to SubSuburbia, a mash-up of British landscape from sleepy parishes to urban cityscapes dreamt up by Margate-based musician Dan Lyons for his debut solo record. “I wanted to take whoever is listening on a journey,” says Lyons of the work that pays homage to a land presently adrift, “from a small town and into the city, through bedrooms, relationships, elation, into sadness, hope, euphoria and claustrophobia, past and present.”

The first stop on Lyons’ sonic trail is SubSuburbia‘s first track, Biarritz. Rooted in the story of an abusive relationship during a two week holiday to the South of France, the accompanying split-screen visuals, directed by Lucile Brizard, follow Lyons and La Femme musician Clémence Quélennec as they maze through the streets of Paris, never quite meeting. Below, Lyons takes us through the track, video and the upcoming record.

On the meaning behind the track, Biarritz:

Dan Lyons: Biarritz is one of the first songs I wrote for the album. I wanted the verses to tell a story – for the song to have a beginning, middle and an end – but also to leave room for whoever’s listening to draw from their own experiences and decide what it means for them. On the surface, it’s about a lopsided romantic relationship with an abusive and dismissive partner and the eventual, inevitable downfall of that relationship. The motions one goes through when constantly striving for attention and affirmation from someone (or something) that is unwilling or incapable of giving it can be at the very least trying and the worst, fatal. It’s a very human condition and I think everyone has been there in one way or another… We always end up desperately clinging on to the past, to all the ‘good’ bits and ignoring the things that hurt us. It’s survival instinct. On the surface of this song, the past we’re looking back at is a two week holiday to the South of France…

The song was co-written by my friend Sacha’s father, François, whilst I was staying with them in Paris. They’re both from Biarritz. In terms of production I wanted the song to be really familiar, a soundtrack to a French café. Musically it’s a bit of a tongue-in-cheek homage to all things ‘Français’. Chris Hayden, who produced the album, did an amazing job of capturing that. All the music was all played live, with me and Clémence doing our vocals afterwards.

Asking Clémence to sing the song with me completed the picture perfectly, she has an amazing, beautiful and eerie voice that really cuts through and creates an uneasiness throughout the whole thing. She recorded her vocals in the desert where she lives in Agadir.

“In terms of production I wanted the song to be really familiar, a soundtrack to a French café. Musically it’s a bit of a tongue-in-cheek homage to all things ‘Français’.”

On his debut solo record, SubSuburbia:

Dan Lyons: I’ve made an album that really lends itself to be listened to from start to finish. After years of singles and disposable music being popular – with Spotify and playlists dictating what people listen to – it feels to me that during the course of 2019 people have grown an appetite for something a bit more substantial. I’m really excited about that.

I wanted to take whoever is listening on a journey, from a small town and into the city, through bedrooms, relationships, elation, into sadness, hope, euphoria and claustrophobia, past and present. SubSuburbia is a name I coined for all the towns, villages, and hamlets in the UK in which it feels like nothing ever happens.

The feeling of breaking out and seeing the world after being stuck somewhere that’s so familiar is wonderful but also very scary. I went through a lot when I first left home and came to London and all that is in the album. The way that your view of your hometown changes once you return having been away for a long time is fascinating too. William Doyle who used to be called East India Youth has just made a great album about exactly that subject… Lost In The Supermarket by The Clash is a good suburban anthem too.

On the video for Biarritz:

Dan Lyons: I was completely in Lucile’s hands when it came to the video, Hedi Slimane leant me a suit and tie and a really nice sequinned jacket from Celine and off we went into the night… I really love the fact that much of the video is split-screen. I also like that Clémence and I never catch up to one another, and that Freya [Warsi] is playing the goddess of fate – she’s in her palace in the sky laughing at our misfortune.

Lucile Brizard [director]: In the beginning I thought, “How am I going to get Dan and Clémence in the same city?” That’s where the idea for the split-screen came from. I was going to shoot Dan in Margate and Clémence in Paris and put them on a split-screen. Then when I really got to know the lyrics, I understood it was about losing something… Nostalgia and being obsessed in a way… So it made sense that they should be in the same city following each other. I liked the idea of being able to see both of their points of view.

“…Freya is playing the goddess of fate – she’s in her palace in the sky laughing at our misfortune.”