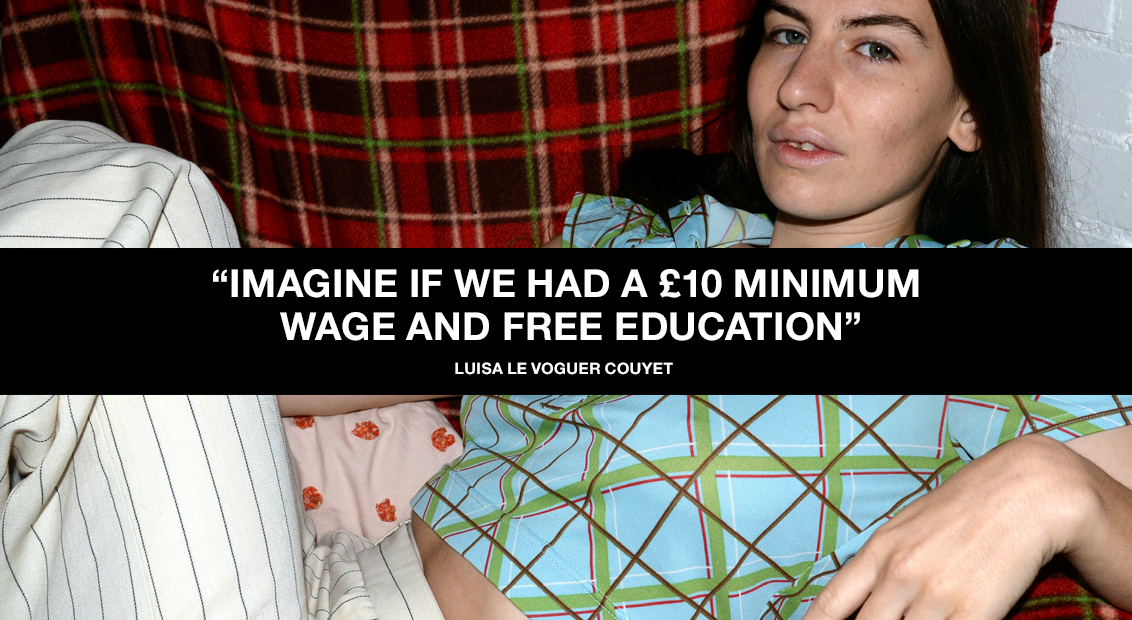 Luisa Le Vouger Couyet: “It’s our future and our NHS, not the elitist dinosaurs’ currently in power”

Luisa Le Voguer Couyet is a writer, artist and independent publisher born and raised in East London. As well as writing for HERO and HEROINE, her words have been published by titles including the BBC and The Guardian, in addition to working on her own independent publication, Hate zine. Luisa has also presented news shows for Fair Planet, and is a passionate activist campaigning for climate policy, mental health treatment and the NHS. A fervent Labour supporter, here Luisa speaks out on why this election is crucial and the issues you need to consider before casting your vote.

How will you be voting in this election and why?
“I will be proudly voting Labour.”

Why is it so important for young people to vote?
“It’s so important for young people to vote because the polices being made today will affect us more than those making them. Under 34’s consistently have the lowest voter turnout, despite under 55’s being well known for their liberal views. We have the ability to swing the election in our favour – by voting Labour and putting an end to Tory austerity. It’s our future and our NHS, not the elitist dinosaurs’ currently in power!”

How do you feel the outcome of this election impacts your peers in your industry? And more broadly, our generation?
“Sometimes the arts flourish during periods of hardship when there is something to push against which can be great, creatively. But at the moment it feels like the only people who can afford to make art/music/fashion/insert creative practice here, are privileged or from wealthy families. The rise of neoliberal policies has seen worker’s rights completely ruined, zero-hour contracts, high tuition fees and people living in insecure tenancies mean that so many amazing working-class artists are excluded from creating simply because they’re forced to choose between surviving or making art. This is the reality. Imagine if we had a £10 minimum wage, a four-day working week, free education and an end to zero-hour contracts? It would be incredible, there would be more time to create and less pressure on people’s mental health.

In regards to the impact of this election on our generation, we know our planet is facing an unprecedented climate crisis and we must consider this in relation to policy. The action, or more likely in-action, taken in the next five years will change the course of everyone’s lives in the coming decades. This is not a joke, we all need to be paying attention. Labour’s Green New Deal will create one million new green jobs, make public transport better and give subsidies and interest-free loans on electric cars, amongst loads of other great green policies! Boris appointed a pro-fracking lobbyist to write the Tory manifesto. Jo Swinson voted against banning fracking.”

“Kids go hungry. People die on the streets. How much clearer could the need for a compassionate socialist society be?”

What are your priorities in this election?
“The environment, worker’s rights, the NHS and an end to Universal Credit are my priorities in this election. The Tories are evil. Over 130,000 deaths have been directly linked to austerity. Hearing people’s stories about how cuts and Universal Credit have affected their lives is disgusting and heartbreaking. It enrages me how unequal our society is at present, the wealth of the richest people in the UK has increased dramatically in the last decade whilst the number of people using food banks tops a million. Kids go hungry. People die on the streets. How much clearer could the need for a compassionate socialist society be?”

Anything else you’d like to say on the subject?
“I’ve been hearing a lot of people saying they can’t vote Labour because of Jeremy Corbyn, but I think we should remember to vote for policies over people. When I lived in Brixton my MP was Kate Hoey, who I hated. I still voted for her though. There are also allegations of antisemitism within the Labour Party and I think we need to listen to people who feel under attack and work with the Jewish community to find solutions not ignore their concerns. I’m not a Labour Party spokesperson but there’s no place for racism in Labour. Although not comparable, I do think that the right-wing media’s response to antisemitism in Labour is completely disproportionate when you consider the blatant racism and homophobia in the Conservative party and how often they are able to gloss over it.

In terms of manifesto – Labour’s new policies give me so much hope! They’re the only party that prioritise worker’s rights and propose a fully budgeted green industrial revolution and if you care about the future then you need to back Labour. You can share your reasons for voting labour on social media using the hashtag #WantChangeVoteLabour!”