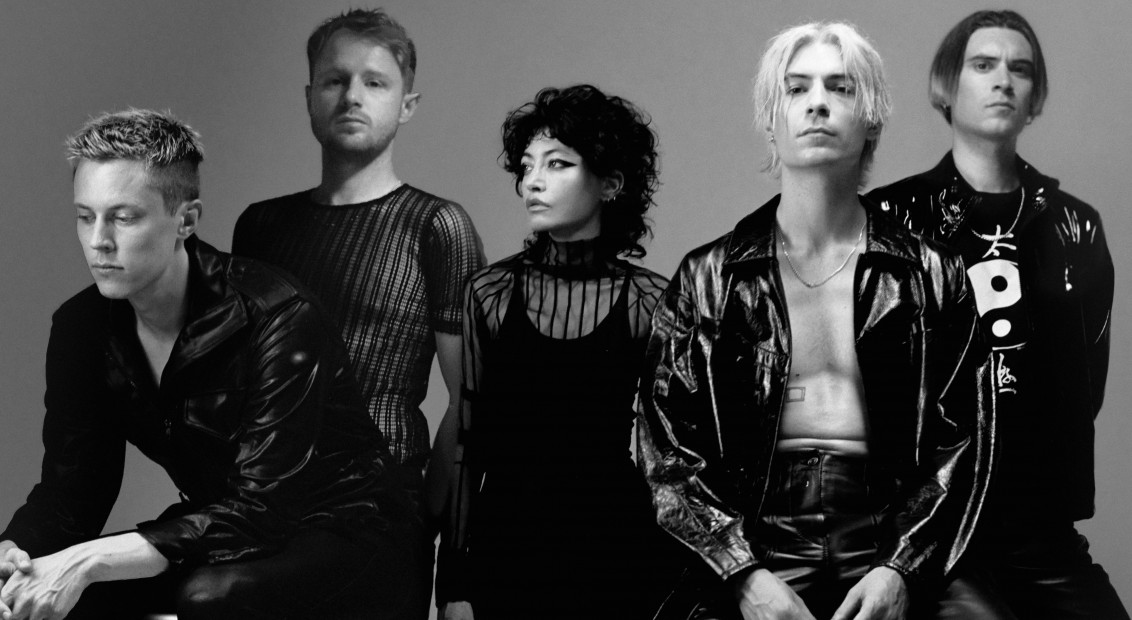 Through buffering desertscapes and A.I. worlds, London band Sweat are a ride worth taking

South London five-piece Sweat, led by Dante Rendel Traynor and his younger brother Gam, have big plans on the horizon. In the midst of releasing their first EP, Sentimental Sunset Part 1, which makes up just one component of an ambitious three-part LP they currently have in the works, cinematic vision is vital to their experimental, genreless pop project. Pulling from a variety of films, anime, subcultures, disused spaces, science fiction and even dreams, both Dante and Gam have a clear idea of how they want to present Sweat.

Dreamscapes and otherworldly fantasies are an integral aspect of their music and identity as performers, as evident in their recent collaboration with Kurdish artist-cum-activist Dashni Morad. Turning their sonic vision into reality, here the band talk us through their sonic reality alongside their new video for What Men Want – exploring themes of toxic masculinity with Dante and his brother re-enacting the biblical story of Cain and Abel in wheat fields, whilst the band play in the hyper-masculine setting of a car garage.

Luisa Le Voguer Couyet: With Sentimental Sunset there’s this subversion of ambient music – it really does paint this slightly off-kilter world. I picture this beautiful sunset trickling into itself and the sky above turning dark. Your music is very picturesque, you get visions in your head when you listen to it – is this how you see it too?
Gam Traynor: Absolutely, it’s about how the sounds come together with the lyrics. Often the instruments aren’t really placeable, it’s not like, “That’s guitar, that’s drums.” The sonics of it can be imaginary sounds taken out of context which don’t always make sense in that new context. The other thing is we often have fake things and real things at the same time, it’s a bit like putting tomato ketchup on a tomato and eating it – there’s almost something disgusting about it.

Luisa: What’s a fake sound?
Gam: For example, instead of having a real flute, having quite a cheap synth flute, or having something that you can’t tell if it’s real, or having the real thing and the fake thing side by side. Real strings and fake strings.

LLVC: It’s very cinematic.
GT: A lot of the imagery is definitely cinematic.
Dante Rendel Traynor: There’s an alternate reality to it. Because of the way the music sounds, it’s necessary for it to exist in an unreal space. Some of the sonics are rooted reality, and obviously it has a live manifestation, but that’s just part of it. Gam: In terms of the music it doesn’t necessarily exist in real space, more in a kind of imaginary environment – therefore the visuals do too. When it’s live, that’s just one side of it that’s opened up, but actually when you listen to it on recording there’s a lot more.

LLVC: You’re talking about fantasy worlds and technology, do you feel like you’re responding to the state of the world?
DRT: Definitely, like a blurry impression. Everything is drawn from reality, all the ideas, the songs, the stories are drawn from real things, but the only way I feel like it makes sense is by blurring aspects together. It’s quite dream-oriented, so it’s built on layers of different values.

LLVC: How do you think your live show represents this cinematic sound?
DRT: In terms of the stories behind the songs, all of our best shows have been ones we put on ourselves in disused spaces. I was living in an abandoned asylum and we did a show there. The building was getting knocked down the next day and we were going to get kicked out, so we decided to do a big show and everyone knew the building was getting knocked down so there were loads of people there just destroying this building. We’ve done a few more shows in non-venues, it’s much more fun when there are fewer rules.
GT: There’s always a good energy.
DRT: It just makes sense to be playing in places that aren’t real places. The songs are about a kind of connection between those two things: people’s ideas of a dystopian future and a dystopian present are becoming completely blurred. I read quite a lot of sci-fi and all the things I’m ingesting have become blurred with the present. It’s also there in dreams… Or nightmares, when you fall asleep you don’t know what you’re going to get.

LLVC: Do you dream a lot?
DRT: Yeah, loads. Really intense dreams all the time. A lot of the ideas for the songs come directly from dreams, not in a descriptive way but in a literal handing on a plate kind of way, whether it’s specific memories or lyrics. If I’m very lucky, some nights I get entire songs. Sometimes the song is performed, one time I had a dream where I turned around and there was a really old American guy wearing shorts with a guitar and he started singing this pro-Trump song. It was like, “America is good and that’s good enough for me.”
Gam: That didn’t really make the cut.

Luisa: Are their certain directors who really resonate with your vision?
Dante: I think Beatrix Blaise is one of the most visionary up-and-coming London filmmakers and we’ve done a lot of work together. I watch a lot of anime and sci-fi, I like how if it’s not set in reality it doesn’t really date.

Luisa: And which artists have inspired you?
Dante: Lots of different things which don’t necessarily make that much sense together. I’ve been listening to a lot of Kate Bush, a little bit of Kanye, also SOPHIE, her style is super-exaggerated, taking things to such an extreme degree, it’s almost abrasive, but also really sugary and attractive. I’ve been listening to lots of Indian music too.
Gam: A lot of the stuff we’re making is rhythm-based and that’s where it can work really well live because it’s quite clubby and dance-orientated, there are a lot of Indian rhythms…
Dante: Bollywood and Arabic music.

“Because of the way the music sounds, it’s necessary for it to exist in an unreal space.”

Luisa: You collaborated with Kurdish artist and activist Dashni Morad on a song, right?
Dante: Yeah, Director. She’s a global activist, she runs several charities and is a pretty amazing person. She came to see a show and was really into it and wanted to collaborate. We had that song and I thought it would be so good if we had Dashni on it. So I called her up, she was in London and was up for it, so she came down to the studio and sprinkled huge doses of magic on it. We did the session and she sang some bits and then she was like, “Let me just do some mountain singing on the track,” and she just basically free-formed all the way through the whole track with this kind of dust wind. We all just sat in the studio with our eyes closed and headphones on, it was actually one of the most powerful musical moments that I’ve ever had. She puts a lot of intensity into what she does.

Luisa: What’s the name of your studio?
Gam: It’s currently called Sweat Studios, we do other bits and bobs there.
Dante: The studio increasingly has more and more bands and we all share stuff, which is really nice. There’s Waterbaby, Wooze, Mellah, Pixx, Heavy Heart, Pleasure Complex, Show Boy… Gam: Deep Tan and Grace Lightman. Dante: We recorded a bit of the Fat Whites’ track, Feet, there, which we co-wrote and co-produced with them, and the strings on Oh Sebastian. We’re doing a project with Nathan [Saoudi] which is called Brian, we just finished the album.