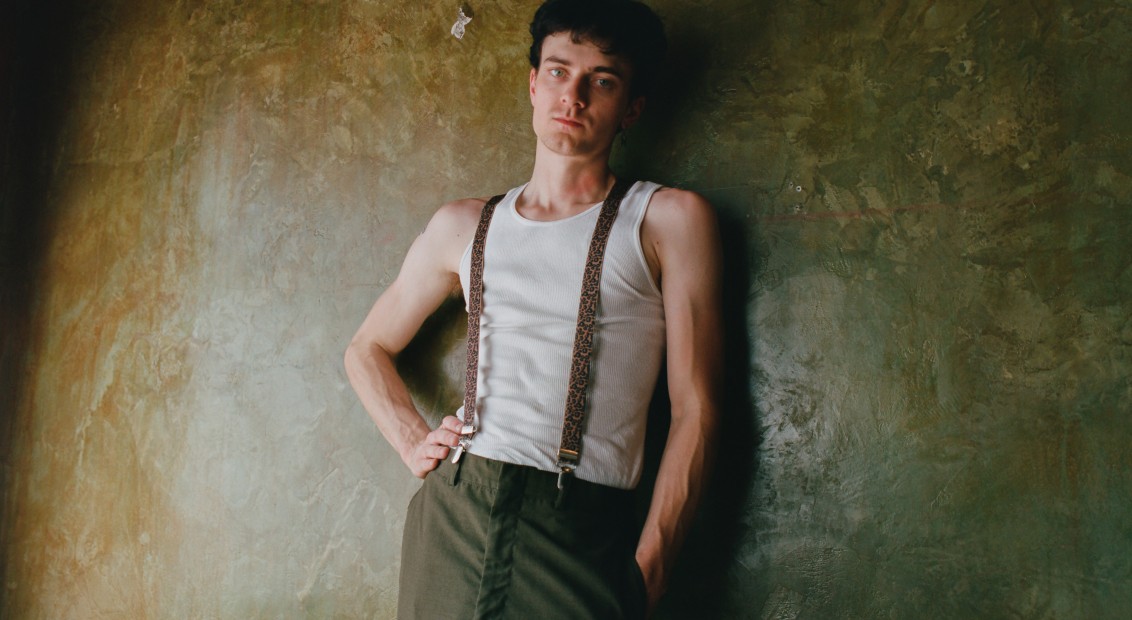 Jesse E. James formed SpiderChild Records in 2015 – having been fucked over by a larger label, he created his own. In the four years since, James has built a network that’s seen him release limited-edition cassettes for bands worldwide – all navigated from his house in Austin, Texas.

Informed by his sonic heroes – the likes of Jeffrey Lee Pierce and Fred Cole – a freewheelin’ ethos and intense passion for music feeds James’ commitment to the cause: “By artists, for artists, in the name of the love of art,” his mantra reads. And as the great, great, great, great-grandson of his infamous outlaw namesake, this counterculture mindset runs deep.

At the time of this interview, James is in London, on a whirlwind tour of Europe with a suitcase of records that’s getting fuller by the second. 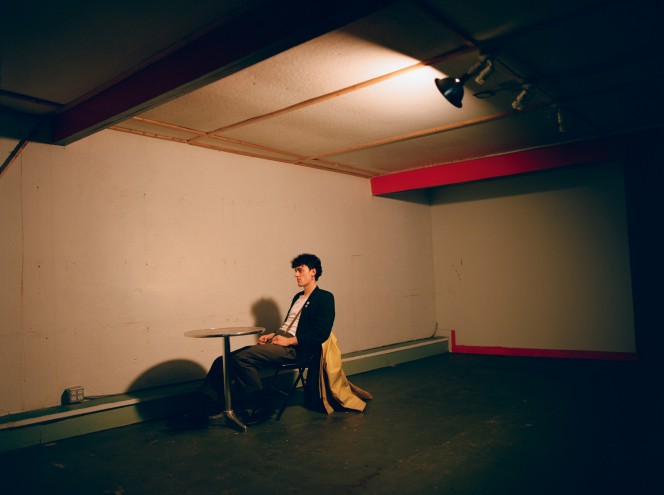 Alex James Taylor: Talk me through the beginnings of SpiderChild Records.
Jesse E. James: Back in 2015 I had a cassette release on Shake! Records from Ottawa, Ontario, and when it was released I didn’t get any copies. I was pissed. So I said, “OK, I’m just going to start my own label to release it then.” I made it, and then I was like, “Hmm, I’ve got free time, I’m bored, why don’t I start doing this properly?” The first two bands I hit up were Jennifer and Frankie Teardrop Dead, both from London – like, “Hey, I noticed you guys don’t have any physical releases, do you wanna do a limited-run tape?” They were up for it and we just split the cost down the middle. From there, I kept it going.

Alex: And what’s the actual process of recording to cassette?
Jesse: For that first release, I pirated a version of Logic Pro and got some people to play instruments, so one friend did a guitar track and my ex-girlfriend did some synth, but I did most of it. Then I mixed it, finished it up and… done. But with other bands, I leave it to them to master because it would suck for someone else to mix your music differently to how you want it. That’s why I love listening to physical format music, it’s like a tangible story – you have the opening track, which is supposed to be a hook, and then it carries on. It’s thought-out, so you should listen to it in that way.

Alex: And with cassettes you have the two sides, like a record, so there’s also that interesting mid-point.
Jesse: Exactly, but auto-reverse fucks up the cassette, so don’t use it.

Alex: What’s auto-reverse?
Jesse: It’s like when you have a player in your car and the side ends and it just keeps going and then goes, kuhh, and flips. It’s not good for the cassette, so I stopped using it.

Alex: Yeah I remember that – so why did you choose to use cassettes?
Jesse: Because they’re so cheap mainly, much cheaper than CDs. We’ve done some CDs before but it’s just not right, for me a cassette is like taking a vinyl record on the go, you can fit it in your pocket. I’d love to do 45s and LPs, but it’s like two grand for 500 45s with colour sleeves and everything.

Alex: You also need the equipment.
Jesse: Yeah, there are companies popping up all over the world offering to make records for you because it’s a big business and they can make a ton of money off these musicians who just want to put their stuff out on vinyl. Vinyl is is the most soulful format to serve music on. Like, Spotify? I can’t use it because I know that for every 10,000 plays the artist gets like thirteen cents, or something dumb.

“We’ve got mumble rappers making millions, and then there are people who really pour their fucking soul into a track and actually know how to play instruments and it goes nowhere.’

Alex: Record sales have been going up recently, and cassettes, so it seems that people are reverting back to those physical formats.
Jesse: They are, it’s booming. I’ve noticed that all the record stores in Austin, or wherever I go to, I’m sure years ago they didn’t have as many cassettes, but now they have racks of them. They have new, old, used. I’ve actually found some of the very first SpiderChild releases in those one dollar boxes.

Alex: That’s a moment [both laugh].
Jesse: Yeah, whatever, it was cool. The release wasn’t that good, I was like eighteen and a little bit sad because my girlfriend dumped me, so it was a little whiney. That one’s not even on the Bandcamp because I’m embarrassed by it [laughs].

“We’ve done some CDs before but it’s just not right, for me a cassette is like taking a vinyl record on the go, you can fit it in your pocket.”

Alex: When did you actually start SpiderChild?
Jesse: It was September 2015. That was when I officially made it a thing – I started recording that first tape around April 2015 – I’ve done like twenty tapes now. I started out doing runs of like 50, but this last one, I did 200, and then Sally Dige, hers was 250. I work with the musicians to create exactly what they want; by artists, for artists, in the name of the love of art, that’s in my head the whole time. A few months ago I discovered a song from one of my early cassettes was up on some Peruvian YouTube page and there’s like thousands of views, the video is all these posh dudes in a Victorian hotel [laughs]. I commented like, “Hey, I’m the actual artist, erm, can you just put my link there?” They never got back to me.

Alex: [laughs] SpiderChild, big in Peru. You run the label out of your house?
Jesse: Yeah, I have some friends who help. Initially, I ran it from my friend’s mum’s shed. She still lives there and every time I go over I’m like, “This is it, the birthplace of SpiderChild Records, in this little shed.” We had mattresses on the walls, a drum set, instruments, amps and really basic recording equipment. 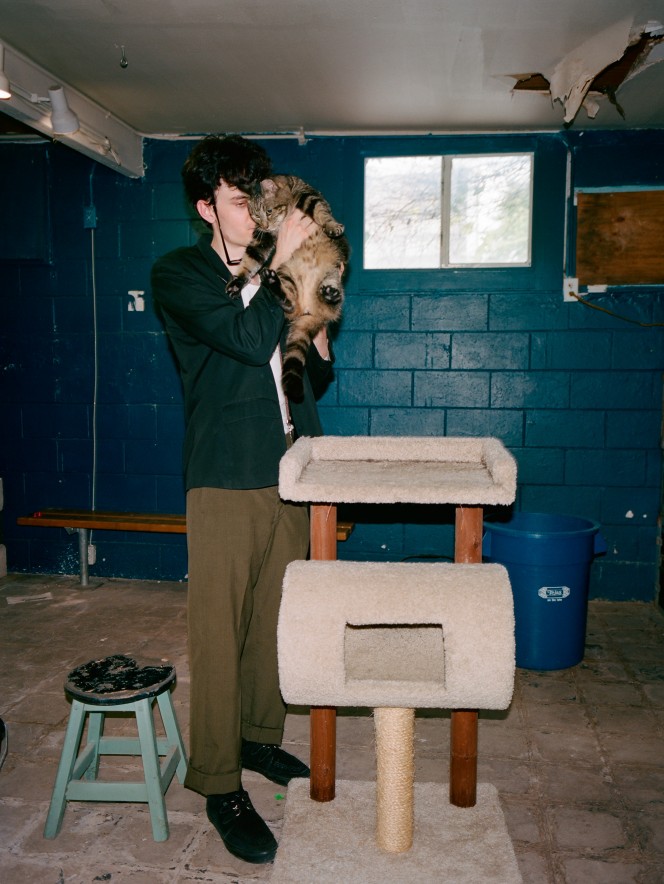 Alex: Are you still making music yourself?
Jesse: It’s been like two years now. The thing is, I really got fed up with doing bedroom recordings by myself and playing every instrument. I’m really looking to find a band who want to practice live and then record it.

Alex: Did you teach yourself guitar?
Jesse: Yeah, I’ve had like four or five guitar lessons before but I’d come in with all these songs I wanted him to teach me, like 60s garage punk, 80s English post-punk, and the dude was like, “That’s weird, I don’t know why you wanna learn that, it seems dumb”, so that was it.

Alex: [laughs] Like tracks from Nuggets?
Jesse: That’s the one. Oh man, discovering Nuggets was like opening a treasure chest, it sparked everything. It was like Nuggets, The Gun Club, Dead Moon. Man, those are the ones.

Alex: What’s the biggest struggle you face with SpiderChild?
Jesse: Probably people just giving a shit. At this point, it’s just for me and the bands because the music industry is so saturated right now. We’ve got mumble rappers making millions, and then there are people who really pour their fucking soul into a track and actually know how to play instruments and it goes nowhere.

Alex: But I guess if they did make millions then maybe they wouldn’t be making music with such soul – it’s a bit of a catch-22 in that sense. The music you put out is pretty diverse, there’s a real mix, from scuzzy garage to coldwave synth.
Jesse: It’s diverse, yeah. I’ve got a lot of different interests, I like synth-pop, 80s… Every decade has gems.

Alex: Where does the name SpiderChild originate from?
Jesse: I was like fifteen, I’m stoned, I’m going to this shitty school and I just fuck it off. So I’m writing lyrics in class and it’s a song called Meet Me in the Tomb. And it goes: “If you need a buddy/ Come on little honey and meet me in the tomb/Creepy spider child coming out of the womb.” I was kinda picturing a Mummies-esque organ part. When that label screwed me over and didn’t give me my release I was like, “Fuck, I need to think of a cool name.” I looked at my papers and saw ‘spider child’. I already knew about a label called Spider Baby – there’s that 60s horror movie called Spider Baby, where all weird shit happens. So I thought, Ok, SpiderChild, I’m one-upping them [laughs], maybe I’ll be Spider-Man one day [both laugh]. [looking around the place we’re in] It’s a cool pub this, I wondered if it was The Damned-themed because it’s called The New Rose?

Alex: Like New Rose?
James: Yeah, that was the first-ever punk single released in the UK but people just forget like, “Oh no, but the Sex Pistols.” No dude, English people don’t seem to give a fuck about The Damned, but you guys have a jewel. A fucking crown jewel. Like, Captain Sensible, he does all those beautiful piano tracks too, he’s a really smart guy. One day I’m gonna get Smash It Up, original 45, but shit’s expensive, man. For a while I’ve been trying to get all The Gun Club singles, I don’t have the fucking Fire of Love original LP though – I want that. I saw one in Camden but it wasn’t on Ruby Records, it was on Beggar’s Banquet, so I was like, mmm… Being me, I know it’s not the first issue so I passed, [laughs] I’m a nerd like that.

Alex: The Gun Club are special, they’re one of those bands that just change things when you first hear them.
Jesse: Totally, I think of Jeffrey Lee Pierce as the blonde Elvis. A big influence on my music taste is my dad. When he was my age he had The Jesus and Mary Chain, Sisters of Mercy singles, Social Distortion, he was in the hub of that in California. Then when he got older he started touring with bands and he was Danzig’s bodyguard, same with Slayer and Sir Mix-a-Lot [laughs]. He told me about a Sir Mix-a-Lot party where there was a big inflatable ass on stage for the Baby Got Back tour. My dad started as a fucking comic book store security guard, then he started working the door at this pretty famous club in Long Beach called The Doll Hut, where all these bands would play, all the OC punk bands. Then I guess he got more and more connections and would go on tour with Soundgarden and Danzig. Here’s a photo [shows photo on his phone], so funny, he’s got the 90s goatee and the ponytail. Look at him protecting Danzig from the crowd, he’s like “What’re you doing, punk?!” Then my mom, I have her old Blondie records that are thrashed, they’ve had water poured on them and everything.

Alex: Do they still play?
Jesse: Oh yeah, those records are raw as hell.

Alex: So what’s your dream for SpiderChild, you spoke about wanting to make 45s?
Jesse: Yeah, that’s probably it. I was trying to get a job, or even an internship, at this vinyl pressing plant and they didn’t even give a shit that I had this label with all these European artists that could put their money into the business, they were just like, “We wanna put out local indie singers in Austin,” just the cheapest, shittest music possible. Eventually I’ll get my own machine and make my own records, I can’t leave it in the hands of those people.