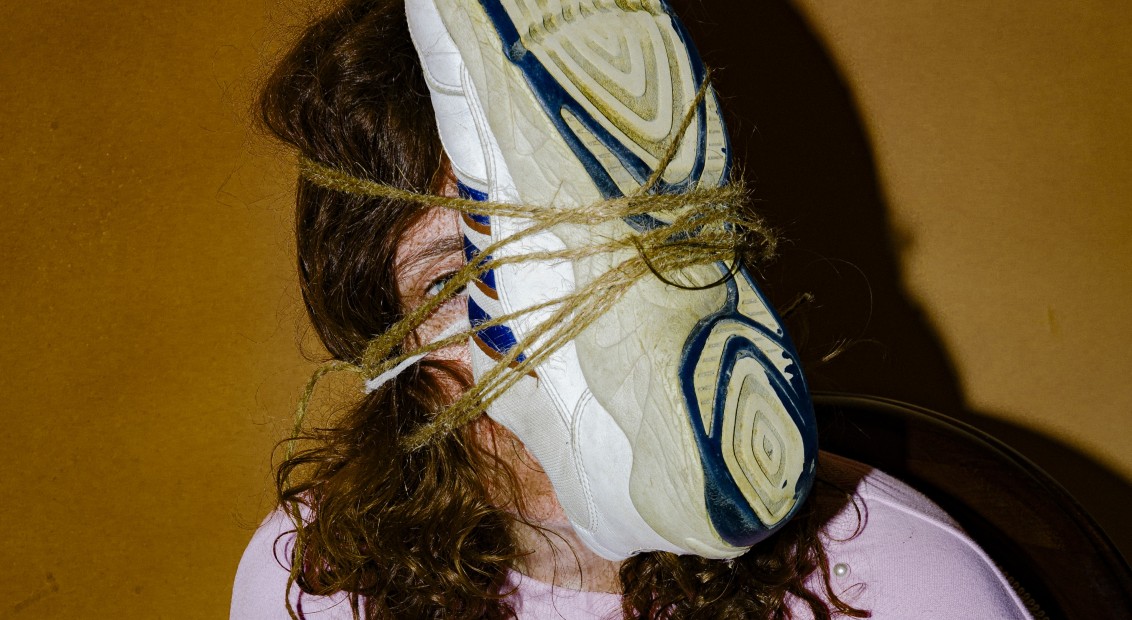 For the past seven years ING’s Young Talent Award has collaborated with Unseen, Amsterdam’s annual photography festival, on a global search for the most exciting prospects flying under the radar. With a natural focus on the peripheries of contemporary photography (this year’s new participants include galleries from India, Ghana, Argentina and Singapore), the Award embodies Unseen’s pledge to nurture tomorrow’s generation.

All five shortlisted photographers will receive an intensive three months training under the eyes of internationally renowned photography duo Broomberg & Chanarin (Adam Broomberg and Oliver Chanarin), while the two winners, Karolina Wojtas (Jury Prize winner) and Kevin Osepa (Public Prize winner) will receive €10,000 project fund and an ING commission, respectively. Below we speak to Wojtas and Osepa on their winning series’. 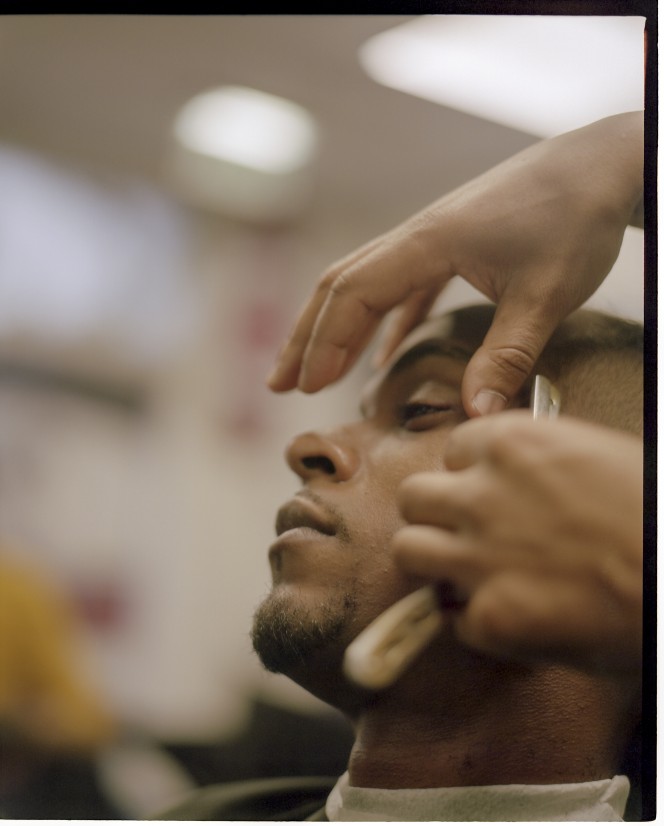 Since moving from his native Curaçao to the Netherlands aged 17, Kevin Osepa began taking photographs as a means of reconciling the drastic change in his surroundings. Upon arriving, he and his friend joked that, “there are no ghosts in the Netherlands”, and the mysticism and ritual that (in spite of still being the subject of taboo) are integral to daily in Curaçao, were nowhere to be found.

In his prize-winning barber shop series, Osepa not only examines the role of ritual in secular society but more broadly, the manifestation of postcolonial Afro Caribbean identity. Much like the intimacy of the barber’s chair, the aim of his work he says, is to start conversations, whether on the Netherland’s colonial hangover and controversial Zwarte Piet tradition, or notions of masculinity among Afro Caribbean youth.

Finn Blythe: Would you say your move to the Netherlands made you more aware of the importance of rituals in Curaçao?
Kevin Osepa: Yeah, because I experienced the Netherlands as a very sober place so it was a big contrast. When I was living in Curaçao I never realised it was so magical so that’s what I find very interesting. In terms of my artwork, living here has a lot of positives because missing Curaçao motivates me to create more work.

FB: How much a part of daily life are rituals in Curaçao?
KO: The funny thing is it’s still a bit of a taboo, people don’t speak about it there but everybody practices in one way or another. The history comes from colonial times when people were forced to be Catholic, so they hid the practices that were demonised by Catholic dogma, so people still live with the idea that it’s something to be ashamed of and try to hide it or reshape it. That’s the charm of it because it’s a very personal thing but it connects everybody, when you start speaking about it everyone knows what it’s about.

FB: What draws you to making an image?
KO: I think there’s a visual power that people can actually feel. For example I never explain every ritual in a photo  because I give people the room to imagine anything they want to. This starts really interesting conversations and that’s the biggest motivation for me. For this work I spent a lot of time in barber shops, and it’s a problem a lot of people don’t know about and it’s also a way for me to be critical of the black community and things that are happening there.

FB: What did you learn from the time you spent there?
KO: For me the barber shop is a place where I feel very uncomfortable. It’s very hard for me to go into a barber shop because you have his hypermasculinty and for me being gay it’s hard thing. So actively putting myself in this space and doing a quasi-residency there, was pretty intense for me, where I heard a lot of conversations that were very homophobic or sexist and sometimes it felt they were referring to me, so I didn’t feel safe.

Over time, people warm to you and you can start these conversations. When you go to this individual person like a barber and not in a group setting you can reach further than if you were with many people. I wanted to show this intimacy between two people – that’s what we go to the barber for, to get cleaned up and to have important conversations that can help us. 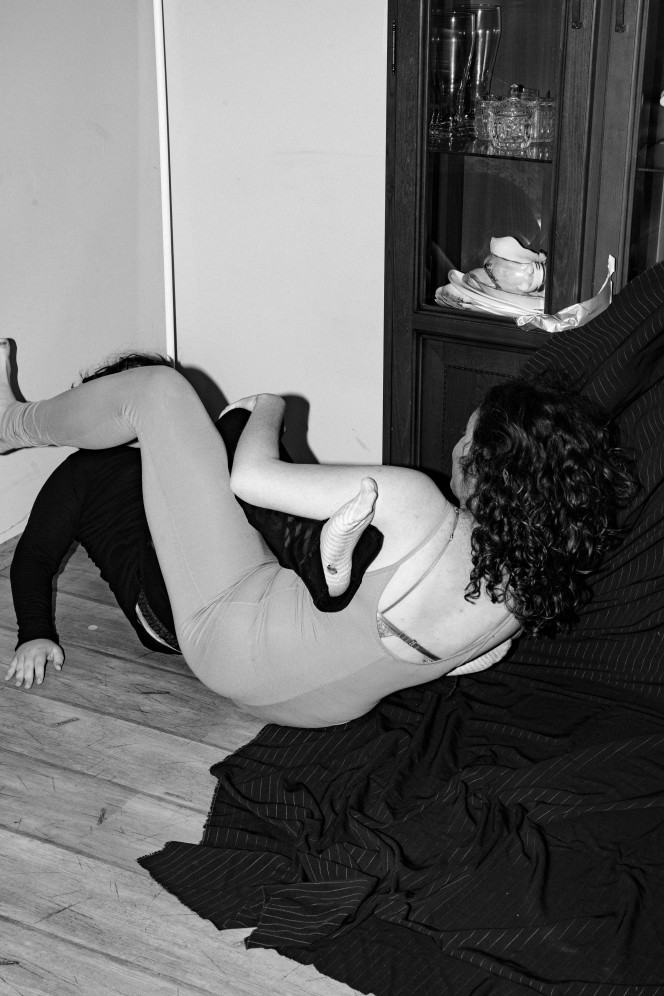 At 22 years old, Karolina Wojtas is among the youngest photographers exhibited at the festival. It should come as little surprise therefore, that childhood and education are at the forefront of her prize-winning series We Can’t Live – Without Each Other (Wojtas is in her final year of study at Łódź Film School). Both she regards as under threat by Poland’s incumbent right-wing populist party, PiS.

Though her images eschew traditional beauty or composition, this year’s jury prize winner is such an exciting prospect precisely because of her unfettered approach and palpable sense of fun. School for her is at once both a time of magical inhibition and one of social programming, where children are conditioned in accordance with state values. Given the degree of control exerted across schools by PiS, with huge overhauls of the education system in 2017, Wojtas’ mission is more crucial than ever.

FB: So did you not have very many photographers to look up to?
KW: No. I always dreamed of becoming a photographer but because I was born in a small city, we have a small photography club which is only made up of men. So when I was small and used to go there, they would say you can take photographs now but once you grow up you can’t be a photographer because women should have children and look after them, photography isn’t women’s work.

FB: Did that make you want to do it even more?
KW: Yes. That day I decided to show them that it isn’t true.

FB: Childhood is such a big theme of your work, what interest you about childhood?
KW: I think it’s the best time because everything is possible, magic is real and there are no barriers, no one to tell you you can’t do it. When you start your education that magic is killed. So the reason I usually talk about childhood is because I usually take in the things that surround me, I want to talk about things that are common to me. But childhood isn’t the only theme I work with, my work is also about school and the changing system in Poland.

FB: How are the PiS part impacting education in Poland?
KW: They’ve turned everything upside down. Last school year, teachers across the country were striking, the schools were closed for around two weeks so it was a very strange time. I photographed the strikes, which isn’t easy because they don’t want people to do that but I think the school is a hugely important time, everyone spends a lot of time there and it has a huge impact on everyone’s future. I think school could be a kind of factory which produces new people, when there is a bad school system it can produce stupid citizens.

FB: What do you think about your time in school?
KW: When I was in school I hated it, now I’m in my last year in University and I try to understand it and take the best things away from it.

FB: Do you think your time at school has influenced the way you want to show it now through your images?
KW: Maybe but I’ve also read some books on the sociology of school and these books have given influenced my view of school too. Why is it that every school in Poland has bars on the window? Sometimes schools in Poland look more like prisons.

FB: Why?
KW: To protect the children, I don’t know.

FB: Some of your exhibitions are quite immersive, how do you want people to encounter your photographs?
KW: I take photography to be sometime playful and fun so I want people who view my work to be able to play with it, too. I don’t like photographs hanging on white walls that you can’t touch or interact with.

Unseen Amsterdam is on until 22 September 2019, for more information on all participating artists and galleries click here.