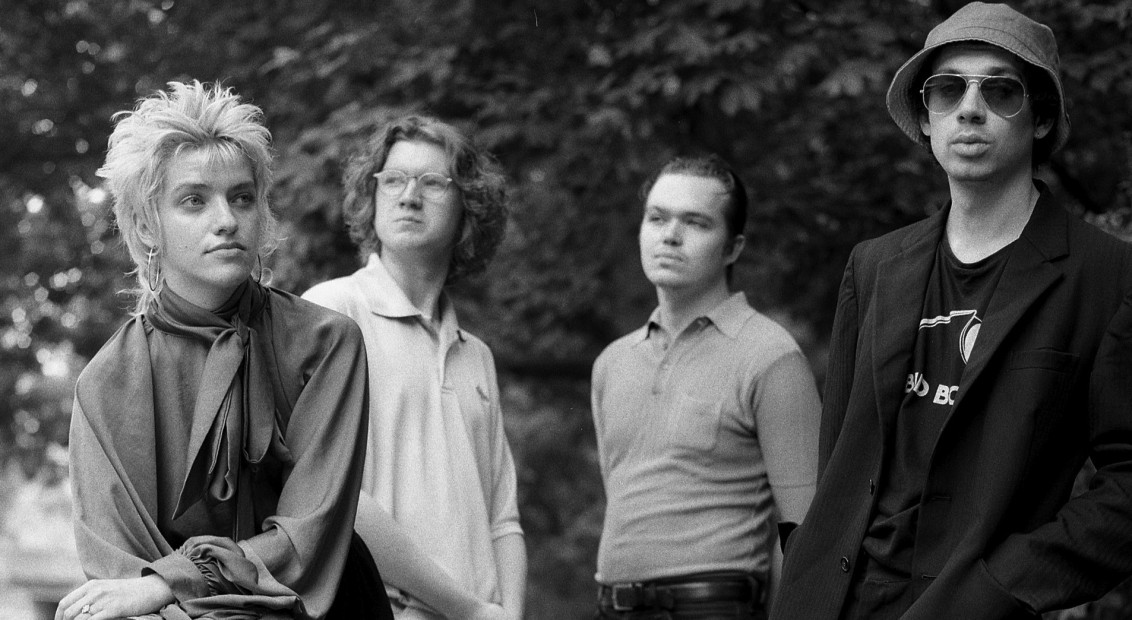 Honkies possess that rare transportative skill that enables the listener to close their eyes and relocate to entirely new surroundings. What with their Americana country romps, freewheeling lyrics and sleazy garage blues, you’d be forgiven for confusing the band’s South London locale for somewhere far more exiled.

Having been touring somewhat under the radar for a few years now – with as many line-up incarnations – the band have recently been in the studio wrapping their new EP, Buzz Band. Fleshing out their ramshackle sound – but leaving in all the chewy bits – the group’s new material sets their chaotic live show to wax while taking tongue-in-cheek jabs at societal wounds and over-hyped, cookie-cutter bands. Inspired just as much by the satirical wit of Silver Jews’ David Berman as by recent HBO series Chernobyl, Honkies are keeping things interesting and we’re all for it. We talk to frontman Jim Sutcliffe below.

Alex James Taylor: What direction are you taking things with the new EP?
Jim Sutcliffe: Sonically I feel the EP is more developed than the previous one. The melodies and layers of the song are a little more thought out, having said that, it in no way sounds polished. In terms of direction we just wanted chip away at what we were already doing, just flesh it out a bit more. I’ve always been a firm believer in pushing on with what you want to be doing and never worrying too much about ‘blowing up’ or writing songs with that in mind. In fact, I don’t think that would be possible for Honkies even if we tried.

AJT: Did you set out with a clear plan? I know you’ve set aside a bit of time to make sure this release is exactly what you want.
JS: The bulk of material was written in the last six months to a year, a couple of them were written and recorded live on the day. We finally managed to get a beautiful studio version of Entitled to Nothing, which we’ve been closing our sets with for the last couple of years. I like to go into the studio with the bulk of the material set out. The only plan was to flesh out the songs and get good recordings. I find it’s best not to think too much about whether you achieved what you went in for – when it’s done it done. I tend to focus my energy on thinking about what we will be doing next.

AJT: What are some of the themes that flow through the tracks?
JS: The title track Buzz Band is a reaction to how I feel a lot of bands are presented currently, the repetitive nature of the song is supposed to represent the utter boredom of how I feel towards most of it (that’s how I justify writing such a repetitive song anyway – maybe it’s just an excuse for lazy songwriting). The industry seems to hone in on something and present it as absolute perfection, yet most of the time it is the opposite, unfortunately. This isn’t to say there aren’t any bands out there who do deserve the hype, Black Country New Road and PVA, who we used to gig with in the glory days spring to mind. Maybe I’m just a little bitter but pretty much all of the others I find sickeningly unoriginal.

The rest of the material deals with the themes I always work with – alienation, general confusion at the world and people, societal inequality, gentrification. The loose and ramshackle trademark honkies sound is very much still retained 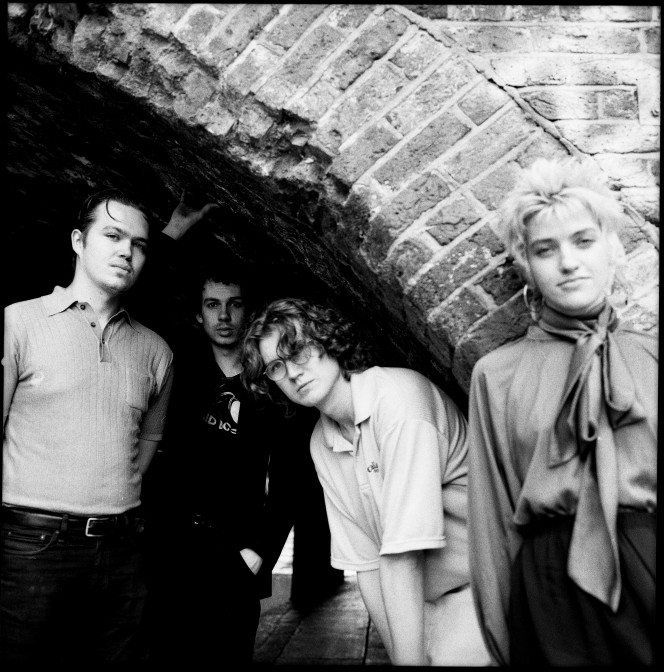 AJT: And where did you record this new material?
JS: In a very pleasant and unlikely coincidence I bumped into an old friend I used to be in a band with during my school days at the Five Bells in New Cross (RIP). After I dully explained that I was working as a video editor to make ends meet and playing in a band making ‘country-synth’ music (and therefore trying to convince him everything was great and I hadn’t completely lost my shit) I found out that his life had taken a much more exciting turn and him and his girlfriend had opened a recording studio. After coming down to a Honkies live show they invited us in for a session. The rest is history.

They were an absolute pleasure to work with and the record came out a treat. They’re the loveliest and most talented producers-slash-engineers-slash-recordists (as Albini would insist) – I cannot recommend them enough.

AJT: Is there anything you’ve been watching, reading or listening to that’s particularly fed into this new music?
JS: In terms of music I’ve recently been blown away by the group of musicians that have been congregating at Easycome acoustic night on a Wednesday in Nunhead. A great new band called Children of the Pope have sprung up recently – I’m sure they have great things to come. Misty Miller’s Fruit EP, Sleep Eaters’ Holy Days EP and Dan Lyons‘ Special People EP are all fantastic – it’s a privilege to have top-notch projects being put out by friends. On the same note, old pals Peeping Drexels have completely reworked their set and it’s sounding banging. Also, Lewis from Morbid Books has recorded a spoken work album for Trashmouth Records. We got together for what can only be described as a ‘sesh’ (for want of a better expression) a couple of weeks ago and we were given a sneak preview – you are in for a treat there people believe me! All of these people and these experiences definitely seep into what we do.

I’ve been reading a lot of classical Russian literature – Gogol, Chechov and Dostoevsky. Some of Gogol’s batshit approach to writing, like The Nose, has definitely made me reassess what’s possible. Previously I’ve made direct references to Arthur Rimbaud in songs but in hindsight it’s made me realise that I no longer want to be a try-hard and pretentious upstart when it comes to songwriting.

The new record is a blend of old country song, The Happy Mondays, Silver Jews and Warmduscer. One track in particular is directly influenced by the TV show Chernobyl which aired earlier in the year.

AJT: I saw on your Facebook how devastated you were when Silver Jews’ David Berman passed away earlier this year, I’d love to hear how his music influenced you guys and what it means to you.
JS: I’ve been listening to Silver Jews for more than twelve years. They are one of the few bands I have truly never become bored off after all this time. Me and Robin ‘Maddog’ McCready (lead guitarist) have had the Purple Mountains record on repeat. It’s very sad I as I felt David had more masterpieces to come.

AJT: His cynical and witty couplets were genius – lots of Americana and absurdity too – I can how he appeals to you as a band. Are there any particular songs/poems that stand out for you?
JS: His way with words was second to none – funnily enough I’m performing at a David Berman tribute night this evening, the songs I will be playing are How to Rent a Room, Darkness and Cold and Rebel Jew.

Playlist: Honkies' songs of the moment

AJT: When I saw you at The Shack you played some of the new tracks like Buzz Band, does playing them live help you hone them? How’s the reaction been to the new material?
JS: We are a live band first a foremost, it’s always the way we flesh out the songs and see what works. The music is high energy so it usually gets a decent reaction. We try and capture that on most tracks when recording, but it’s always important to treat it somewhat differently when recording.

AJT: You’ve been going for a few years now and you’ve been through a few different iterations, when did this latest line-up form?
JS: I believe we started sometime time early 2017 and we’ve had about ten or so different members in that time. All of different playing standard and skill, which is a great thing. I love constantly working with different musicians as it keeps things fresh and exciting – whoever is involved at any moment adds something different. It’s the way Honkies has always been. People are always too busy, not committed enough or have to leave as they can’t stand being in the band. I think 80 percent percent of this is my fault as I’ve been directly told that I’m not very easy to work with. I’m working on it.