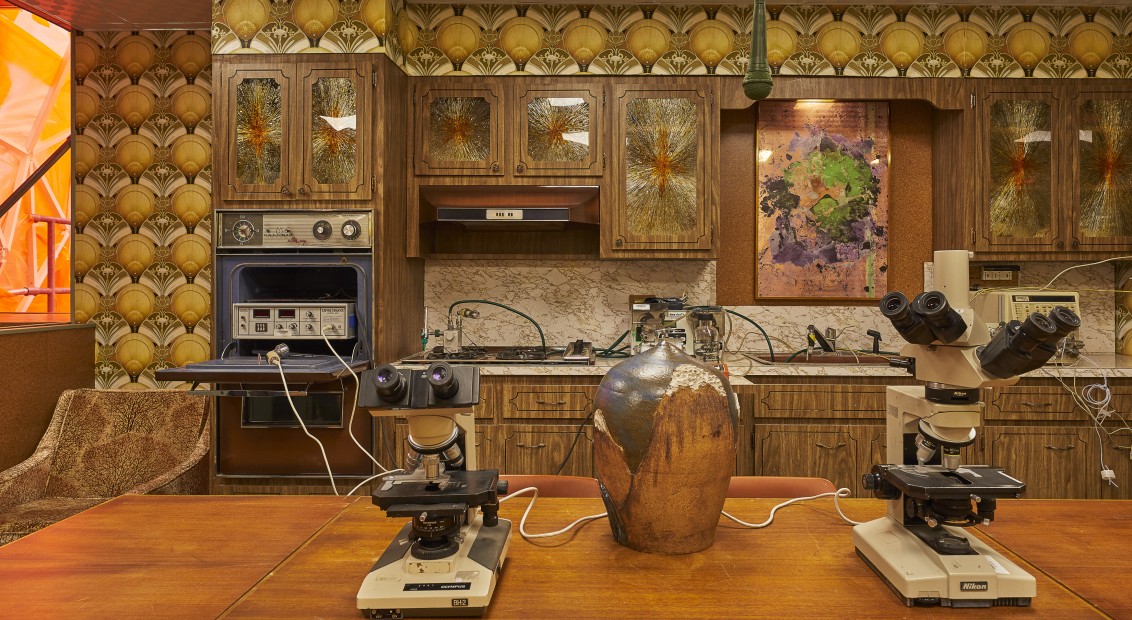 From meth labs to hippy communes, meet the US duo building immersive worlds

One of their best known works, Hello Meth Lab in the Sun, created for Ballroom Marfa’s Spring 2008 exhibition, saw the pair transform the Ballroom’s gallery spaces into a labyrinthine assemblage of historically reconstructed spaces. From a hippy commune to an underground meth lab, a clinical retail environment and a burned-out kitchen, these painstakingly constructed mis en scenes, made from salvaged materials reminiscent of Mike Nelson, riff on the idea of alchemy and hybrid forms.

For Freeman and Lowe’s most recent exhibition, Colony Sound, the duo have transformed Marlborough Gallery beyond recognition, with eleven hyper realistic dioramas that span both floors as well as the gallery’s staff staircase. According to Jonah, the exhibition can be summarised in one word: “hybrid”. Whether a cactus grown from a crystal, a retail environment converted into a youth dwelling or a mobile that’s part plant, Freeman and Lowe are experts at playing between the lines, evading straightforward classification. Like Hello Methlab, their latest exhibition juxtaposes counter culture with industrial production, nihilism with materialism, the occult with tech industry – all played out in a full scale, minutely detailed model.

The conceptual precursor to Colony Sound came with the pair’s 2018 installation, A Cell in the Smile, the first in a triptych of works based on an obscure (and entirely fictional) 20th century communication system known as The Smile. Buried in the wildernerness of Ohio, a subterranean bunker is framed as the nexus of California’s booming Cold War technoscape and the site at which this subliminal communication technology was conceived. When we arrive at the second chapter, Colony Sound, the project has lain dormant for years, and has now been repurporsed by a counter cultural youth movement as an alternative telecommunication network.

Punctuating the fuzzy interplay of fact and fiction are real people and real places. From Claude Shannon, the American mathematician widely regarded as inventor of the Information Age to  futurist Herman Kahn, postmodernist author William S. Burroughs, L Ron Hubbard and Bell Labs – all shape some aspect of Freeman and Lowe’s deeply textured vision. Below the pair discuss their latest creation and the historical references that inspired them. 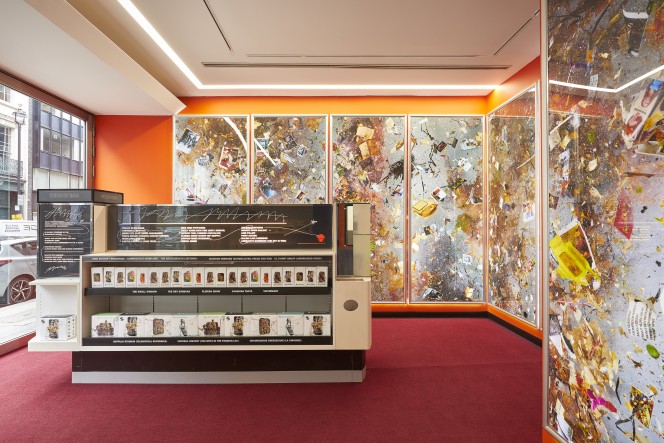 Finn Blythe: What links Hello Meth Lab to Colony Sound? Do they come from a similar intellectual place?
Jonah Freeman: I think they do. From a historical perspective, we’re interested in these relationships between counter culture, the underground, industrial society and industrial technology. So in the case of Hello Meth Lab in the Sun, you had this idea of juxtaposing a counter culture environment next to a site of industrial power, next to a site of a meth lab, which was the most nihilistic version of a counter culture, there’s no ideology left, it’s just illegal behaviour.
Justin Lowe: And also that you’re able to make that with the products of industrialisation, it’s sort of under the kitchen sink.
JF: The fruits of industrial progress have led to that. A lot of those themes are present in this show and have been present throughout. I think it’s this idea of being very interested in the Cold War and the technological ‘progress’ that emerged and how counterculture co-opted that and turned it into their own thing, like how counterculture spawned the internet and a lot of the free and open communication systems that we’re dealing with now. In a lot of ways counterculture is dissolved for something else and so we’re interested in those historical relationships.

FB: What can you tell me about West coast Cold War tech industry? The press release refers to the paranoia of those industries.
JF: The paranoia was just the Cold War paranoia, they were worried about the Russians and spies and ‘them’ getting there first, all that stuff. So that spawned a lot of technological innovation, especially in California you had aerospace, you had communications technology, microchips – all this stuff that was really at the forefront of technological innovation, going on right there in California.
JL: And with an underbelly of the resurgence of the occult. 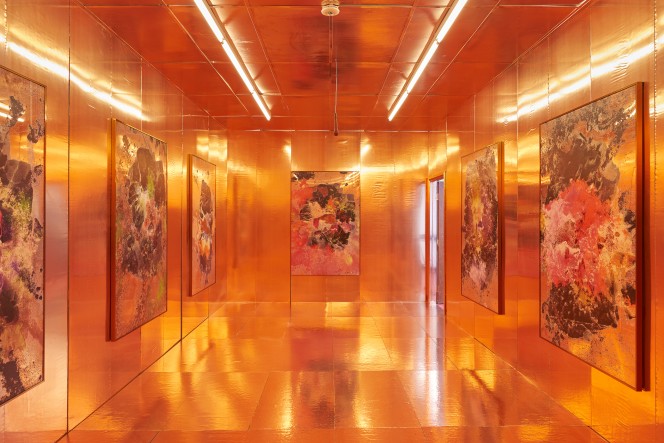 FB: How is that tied in?
JF: Well Jack Parsons who started JPL [Jet Propulsion Labs] was friends with Camron [Marjorie Cameron] and L Ron Hubbard. There was some connection to Aleister Crowley and they were doing a lot of pagan rituals, he [Parsons] eventually blew himself up in his own house…All of that’s mixed up in this weird way, the lines are not so hard between counterculture and mainstream culture.
JL: John Lilly, who worked on MKUltra, the guy who was doing investigations into dolphin consciousness. All these things might have come to a head at a place like The Esalen Institute, which is a research study centre for esoteric healing and access to the other world. So a lot of these people might come together there and that whole coast gets reimagined in our universe as the SanSan, from San Francisco to San Diego.
JF: Which in itself was a Cold War idea, developed by a futurist Herman Kahn in the 1960s who is gaming out what things will look like in the year 2000, so it’s like sixties ideas. He was a game theorist and a futurist and was mostly working out scenarios for a nuclear holocaust but he wrote a book The Year 2000 and it was all these predictions of what life would be like, and one of them was that from San Francisco to San Diego would be one giant city.

FB: What can you tell me about The Smile?
JF: It’s a fictionalised, perverted idea about the development of communication technology. In our version it perhaps goes a step further than it did in that time period, but with the same objectives in place. So they develop a biological communication network using mycelium as a base and it can transmit with more fidelity and it’s untraceable, so all things people were trying to achieve at that time. Some of the figures in there are real, like Claude Shannon was someone who wrote about and did experiments in communication technology. Obviously Bell Labs was instrumental in all kinds of inventions. So this is another case where we’re taking the history of communication technology and sort of perverting it with our own parallel world.

“We’re taking the history of communication technology and sort of perverting it with our own parallel world.” 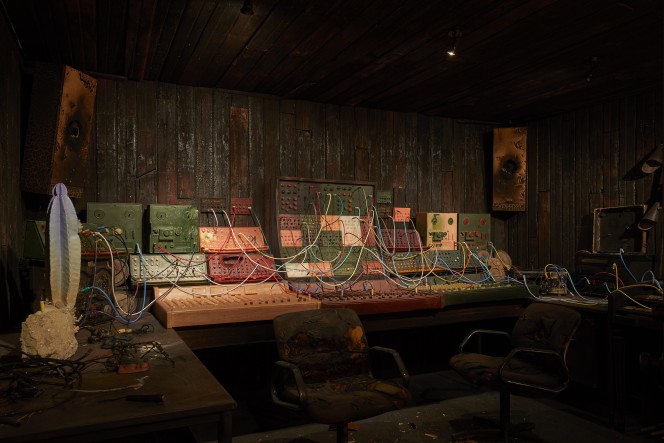 FB: When you come to designing the show, do you design with an occupant in mind?
JL: A lot of the projects have had a photo session to create an idea of who occupied these rooms.

FB: What happens in a photo session?
Justin: In some of the previous works there might be a party, so we have people in the space before it’s transformed into what the viewer would see in the exhibition. This really came to fruition in this piece we did Bright Light Underground, where we had a Schindler house in Los Angeles that we completely transformed. Before we did we hosted a party which was heavily documented and was supposed to emulate some of the psychedelic research that was going on at places like Millbrook with Timothy Leary or actually in Hollywood with a lot of celebrities who were trying out this new miracle drug before it became illegal. So you would have these photographs you could put in the installation that give a kind of mis en scene, you can look back and in an almost Stanley Kubrick Shining way, you can see the same character in a different time but in the same place.

FB: Why does hybridisation interest you?
JF: I think it started with Hello Meth Lab in the Sun and we always thought the general theme of that was if it were a college course it would be called Alchemy in a Modern Context and so alchemy is about transforming materials into something else and in a way a hybrid and I think that just carried through.
JL: Even on a basic level, when we started hanging out together we were just staying up too late making collages, so the tendency toward collages just got really out of hand [laughs].