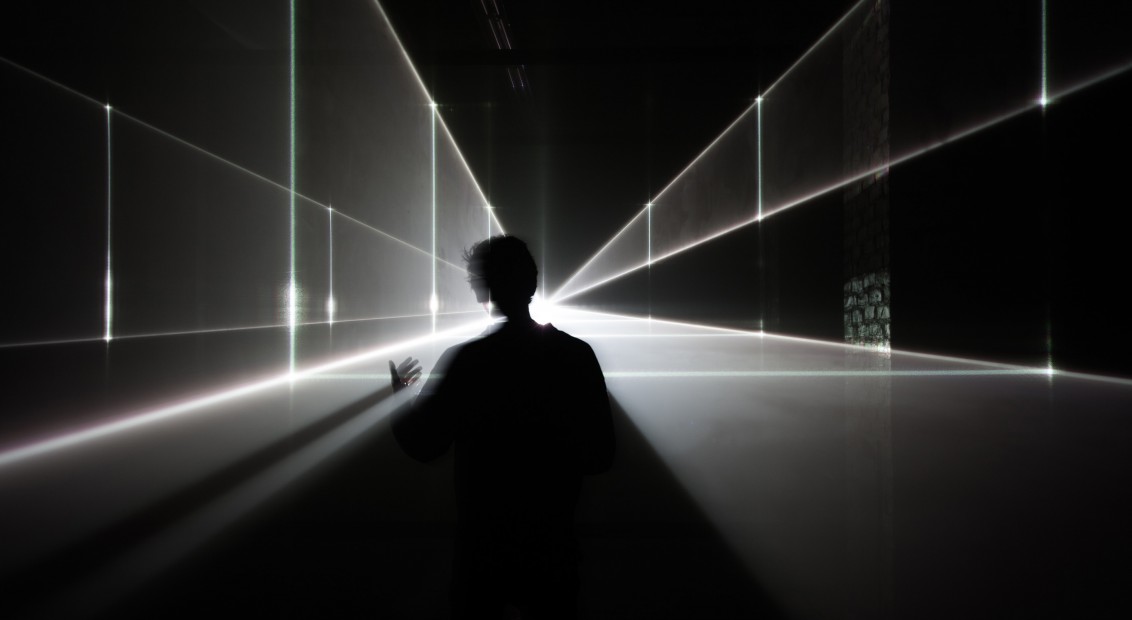 United Visual Artists on guiding audiences through a synthesised reality

For fifteen years, London-based art practice United Visual Artists have been creating and evolving their work at the intersection of art and technology. Combining their talents – from the worlds of fine art, technical production and software design – the trio question society’s relationship with tech by guiding visitors through worlds that straddle the real and synthesised. Marking this anniversary, the trio brings their practice to London, holding a spectacular and immersive exhibition at 180 Strand.

Titled OTHER SPACES and commissioned by The Store x The Vinyl Factory in collaboration with Fondation Cartier Pour L’art Contemporain, Paris, the exhibition brings together three large-scale, multi-sensory installations by UVA: Vanishing Point, a laser installation that taps into the idea of programmable architecture; The Great Animal Orchestra, a soundscape collaboration with bio-acoustician Bernie Krause formed from over 5,000 hours of field recordings of over 15,000 species of animal; and Our Time, the third iteration of a kinetic installation exploring the manipulation of time in a digital world.

Here, Matt Clark, founder of United Visual Artists, takes us through each of the three installations, from conception to hidden workings. 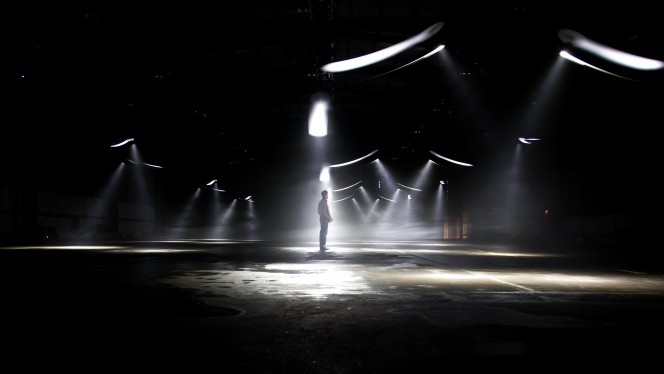 “Our Time is a site-specific kinetic installation consisting of an array of mechanically controlled pendulums that are designed to manipulate the viewer’s perception of time.

The work started with a debate in the studio with the question, “How long is a second?” It turned out to be 9,192,631,770 oscillations of a caesium atom in an atomic clock. On a day-to-day level, we all know what time is, but what it is in of itself can be very difficult to put into words. There are scientific studies that suggest, because of our digital lives, our brains are being rewired to experience time faster. I think we can all relate to this. We never seem to have enough time yet we can find ourselves distracted by meaningless information for long periods of our day. So we wondered, “What if we could create a space that did the opposite, slow time down and make space for contemplation?” For selfish reasons, I’m interested in creating spaces where time no longer has meaning, where you can forget about everyday concerns momentarily.

The pendulums each have a light and sound source that are activated by the movement as they swing, creating a performance of sorts. The work has very little physical materiality; our interest is in how it conducts space, transforming the environment that it occupies.

“We wondered, “What if we could create a space that did the opposite, slow time down and make space for contemplation?””

We consider the work to be what we call a spatial instrument, where we re-programme it for each new space. There’s something about experiencing synthesised sound moving physically that I find particularly interesting as it’s not something you encounter very often. 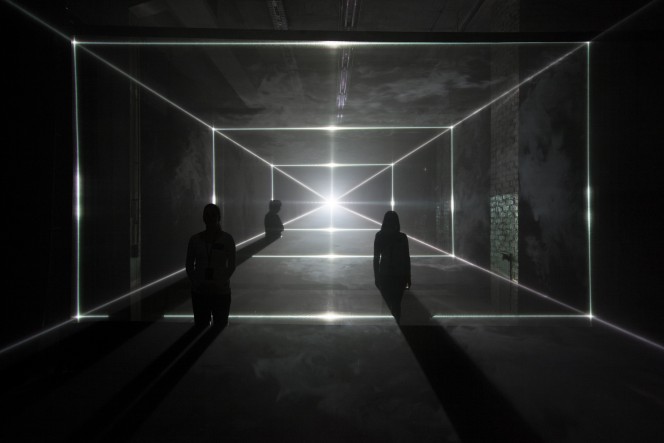 “Vanishing Point comes from a series of works which explore spatial intervention and how we perceive space. Firstly, from our interest in what we call light architecture; light manifesting as form, an illusion constructed from something which itself lacks physical materiality. But there’s another component — the idea of programmable architecture.

When I started working with light, it was mainly for live performance, most of that involved negotiating many light sources on a stage to create layered compositions and moods. For our first art commission at the V&A in 2004, we created a sculpture for the John Madjeski Garden – the work, titled Monolith consisted of a singular light source emanating from the centre of the space. What amazed me was the power of light in it’s most minimal form. There’s something very primal about our attraction to light; there’s a very seductive quality to it that’s hard to explain scientifically.

Light, however, can be a difficult medium to work with, it’s not tangible like other materials, so you have to guide it into form.

Vanishing Point creates the illusion of light as a physical material, slowly drawing through space where the room is divided into different architectural compositions. Then there’s the programming of the work; we used an algorithm that generates various forms based on a set of rules. Sometimes the work is dormant and inactive, at other times, it erupts into a frenzy of activity; this gives the work a kind of autonomy or presence that seems devoid of human intervention.” 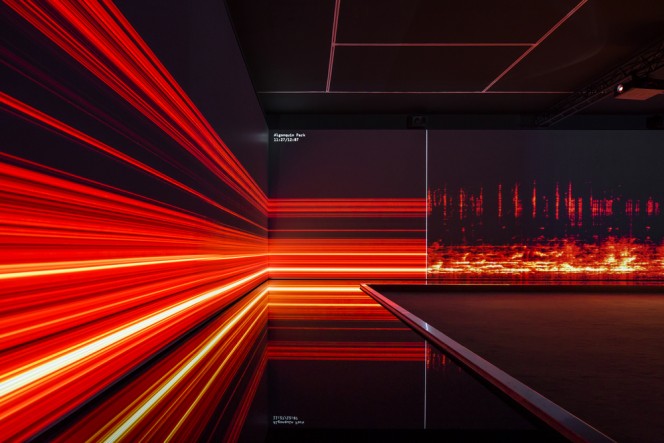 “The Great Animal Orchestra is a collaborative work between UVA and the bio-acoustician Bernie Krause. UVA has always had an open approach to collaboration and occasionally we collaborate with specialists who work in fields outside of our practice such as choreographers, musicians, scientists and philosophers.

We were introduced to Bernie through Hervé Chandès at the Fondation Cartier Pour L’art Contemporain, who wanted us to collaborate on a new work for the Fondation’s Great Animal Orchestra exhibition in Paris back in 2016.  Bernie specialises in taking field recordings as a means to better understand the natural habitat and over forty years has gathered recordings of animal sounds in a wide range of habitats. His work highlights the impact of industrialisation on the natural world. Hervé asked us if we were interested in translating Bernie’s studies into an experiential installation for the exhibition.

When I listened to Bernie’s recordings, I was amazed by how atmospheric they were; they transport you to an entirely different place. But there’s a melancholic aspect to them, many of the species that you hear are now extinct and will never return to the natural world.

To understand the complexity of a biophony, Bernie uses what’s called a spectrogram. This software tool organises the different animal species into separate sound frequencies on a timeline as you listen, so you can see what you hear. It’s incredible to see how all the animals and insects communicate in this way; it’s as though they are all working together as one big orchestra.

“When I listened to Bernie’s recordings, I was amazed by how atmospheric they were; they transport you to an entirely different place.”

We used the spectrogram data as the primary visual gesture to create a landscape of information through the medium of light. Specific colours are used to represent different habitats and field recordings. When there are sound frequencies at the lower end of the spectrum, that are inaudible to the human ear, a large reflective water pool creates ripples to represent them.

The installation has a meditative quality to it which I like. I think the fascinating thing about this project is that it deals with two things simultaneously, the impact of humans on the natural world and the origins of art, specifically music.”

OTHER SPACES runs at 180 The Strand from 2nd October until 8th December. Entry is free, open Tuesday through Sunday, 12pm – 7pm.