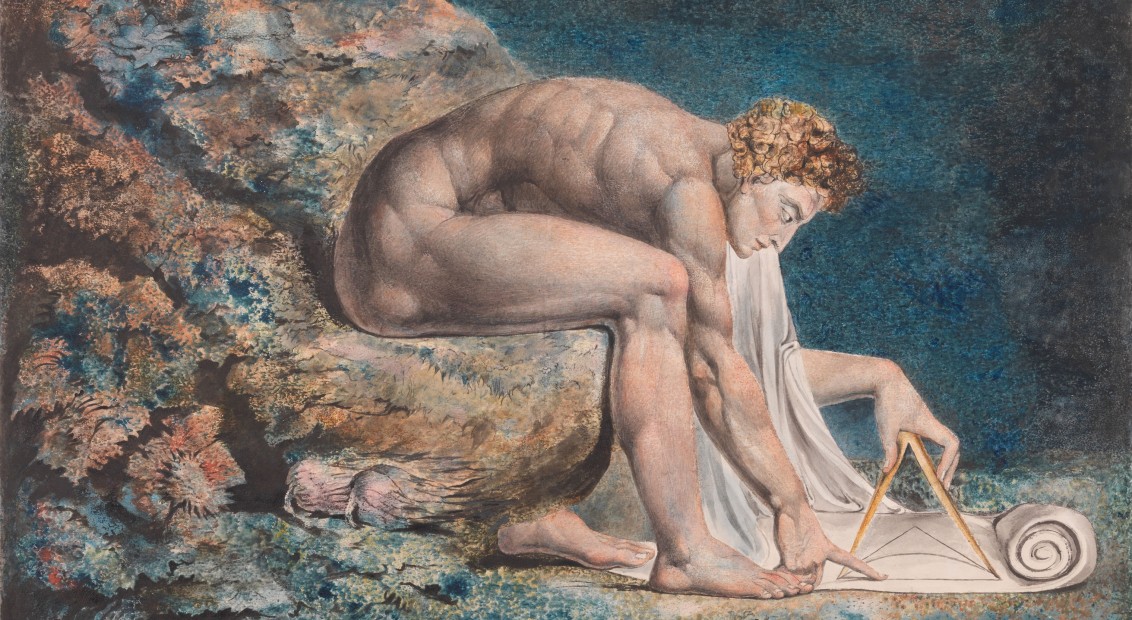 Though fame and fortune eluded William Blake, contemporaries considered him mad, and his work almost slipped from memory in the 19th century, a new exhibition of his inimitable oeuvre at Tate Britain reminds us of his status as one of Britain’s most extraordinary and influential artists. Prone to divine epiphanies from a young age, Blake channeled his visions and affinity with the sublime into paintings, poetry, engravings and prints, many of which will be on show for the first time in this country.

Born in Soho in 1757, Blake’s relationship with London informed much of his work, particularly his exposure to the cultural wealth and urban impoverishment that surrounded him. His work not only demonstrates a departure from conventional styles and techniques (Blake was a rebel throughout his six-year training at the Royal Academy), but also counters the cruelty, ugliness and squalor of an industrial metropolis.

For centuries, the story of Blake has been of a solitary and eccentric visionary, an account that erases the legacy of his wife of 45 years, Catherine. As this exhibition demonstrates, Catherine played a central part in his life, not only by indulging his urges to paint her in the middle of the night, buttressing his daily life, but also helping print and finish a number of his works and, even after his death, advancing his reputation. 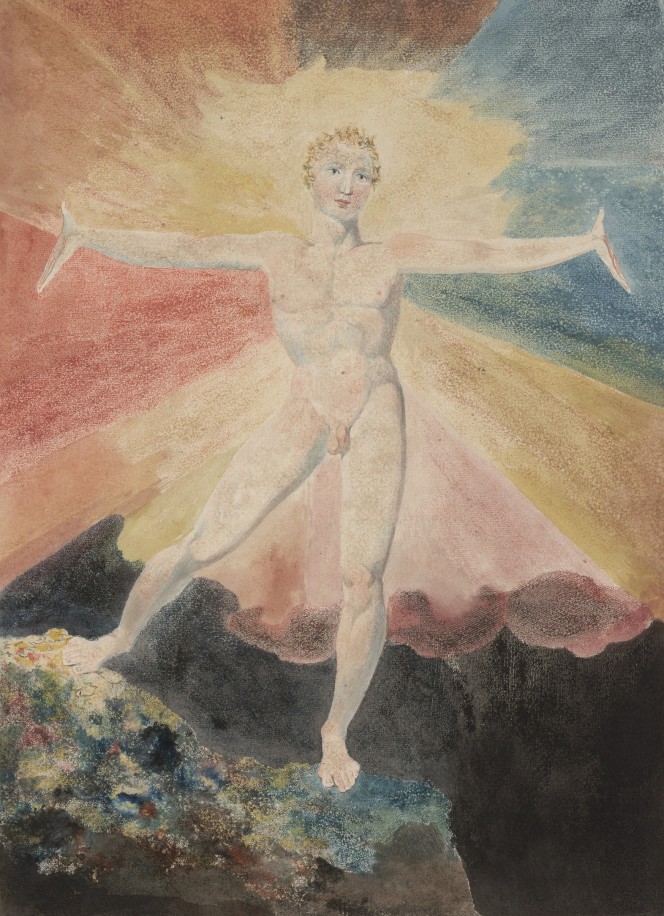 Martin Myrone: Albion Rose (c. 1793) is one of Blake’s most recognisable and reproduced works, and along with hundreds of other prints, paintings and drawings that he produced, has been subject to a century and a half of discussion and debate. The figure of a young man, resplendent in his nakedness, arms outstretched and seeming to leap up from a craggy rock, a dazzlingly prismatic burst of colour behind him, has become an emblem of freedom of all sorts. It has served as a clarion call for revolutionary action, whether in relation to politics and social justice, the poetics of the counter-culture, or ideas of imaginative freedom, psychic wellbeing and body confidence.

It has done so in books and on book covers, on album sleeves and posters, alongside essays and polemics, on tote bags and in museum exhibitions and gallery displays, in libraries and school-rooms, and at home or in the street, on Twitter and YouTube, in blog postings and websites. It has served to represent an idea of ‘British values’, of universal human values, of the value of resistance, of creativity, of freedom. It can be related to several different strands within Blake’s poetry and thought and exemplifies how any single work by Blake might have multiple meanings. 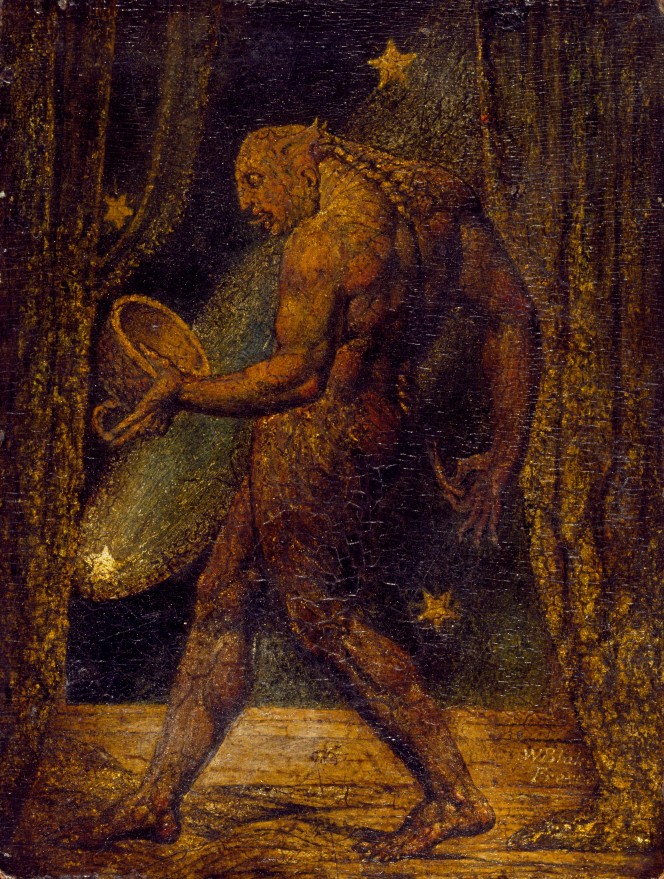 Amy Concannon: The Ghost of a Flea is one of Blake’s most bizarre and famous characters. At this time, the artist was known to commune with spirits, often in the company of his friends John Varley and John Linnell. Varley witnessed the creation of a sketch of this figure, drawn from during spiritual vision. The artist is said to have cried out: “There he comes! his eager tongue whisking out of his mouth, a cup in his hand to hold blood, and covered with a scaly skin of gold and green.” Varley also owned this painting, showing the creature on a stage, flanked by curtains with a shooting star behind. He was a keen astrologer and paid Linnell to engrave Blake’s drawings, including the Flea, to illustrate his Treatise on Zodiacal Physiognomy (1828). 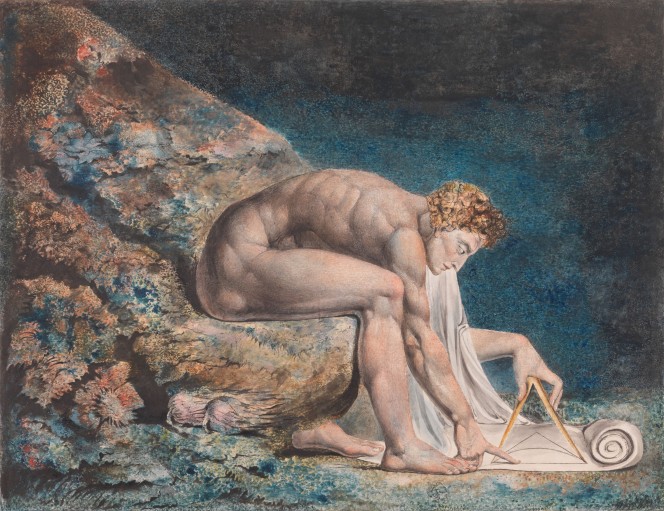 MM: Newton (1795-c. 1805) is one of twelve large prints in a collection created by Blake. There is no definite sequence to these works, and the subject matter is drawn from various sources, including the Bible, Shakespeare and Milton, as well as Blake’s imagination. Scholars have connected the prints in many different, inventive ways, but each image remains open to interpretation.

They were produced using a form of experimental monotype that involved tacky ink being painted onto a board and being transferred through pressure onto a paper sheet. The basic printed image was much enhanced with ink and watercolour and the end result is very painterly, but with some extraordinary textures which would be impossible to achieve by hand. Blake referred to these designs as ‘frescos’, the term he also used for watercolours and tempera paintings as well. The term reflects his wish to imitate the grand wall – paintings of the ancient world and medieval times. 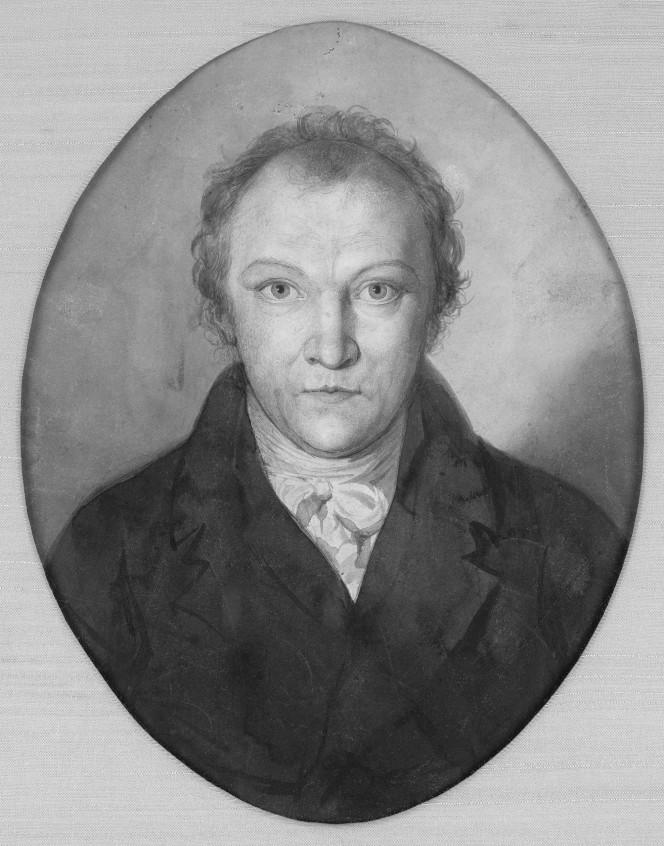 MM: This image of William Blake is thought to be his only finished self-portrait, and offers a unique insight into the visionary painter, printmaker and poet responsible for some of Britain’s best-loved artwork. Created when Blake was around 45 years old, the work is thought to present an idealised likeness.

Rather than showing Blake as a painter or engraver, signs of his creative intensity are conveyed in his direct hypnotic gaze. This compelling image was produced after 1802, at a turning-point in Blake’s life. Having lived in Sussex for three years and been falsely accused of treason, Blake returned to his native city of London and was re-establishing himself as an artist. The portrait shows Blake as an isolated and misunderstood figure.

Songs of Innocence and of Experience: The Tyger 1794 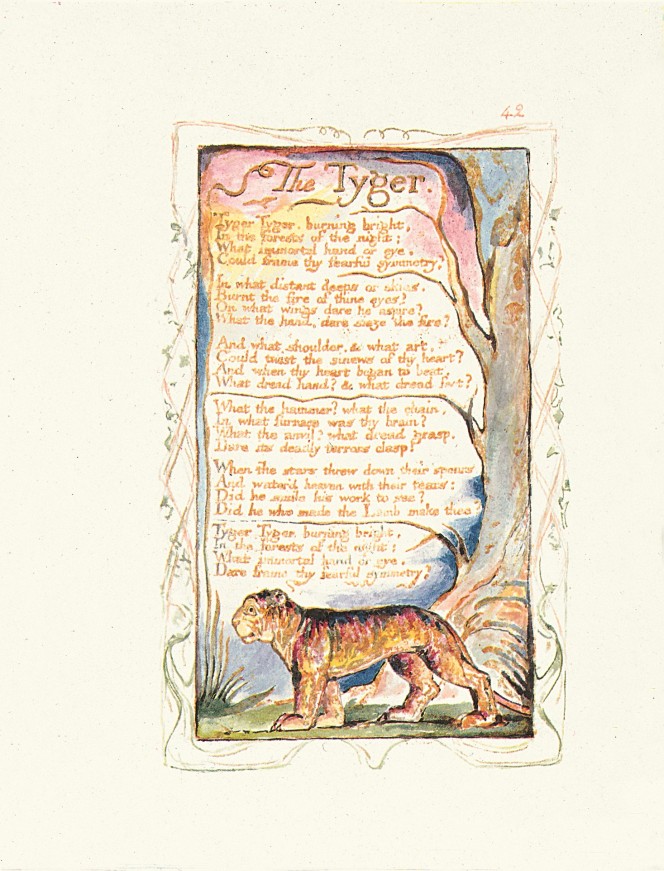 Songs of Innocence and of Experience: The Tyger 1794 54 relief-etchings, hand-coloured with watercolour, with some gold, bound in calfskin. Cincinnati Art Museum, Gift of Mr. and Mrs. John J. Emery

MM: The Tyger (1794) is Blake’s best-known short poem. The contrast between the intimidating creature evoked by the text and the rather cuddly big cat drawn by Blake has drawn a lot of interest and commentary. Blake’s illustrations rarely directly embody the text, and often contrast with or complicate the written words. The poem is included in Songs of Innocence and of Experience (1794), a collection of illustrated poetry that became the best-known of his illuminated books.

He sold more copies of these books than any other (although he probably printed no more than thirty in his lifetime). Some of the poems were also published in conventional form in his lifetime or shortly afterwards and have become extremely well- known. The poems deal with themes of childhood and morality, with striking observations about social suffering and injustice. The style is highly decorative, the dense crowding of texts and borders suggesting the illustrations of children’s books or even embroidered samplers.

William Blake is on at Tate Britain from September 11th – 2nd February 2020.