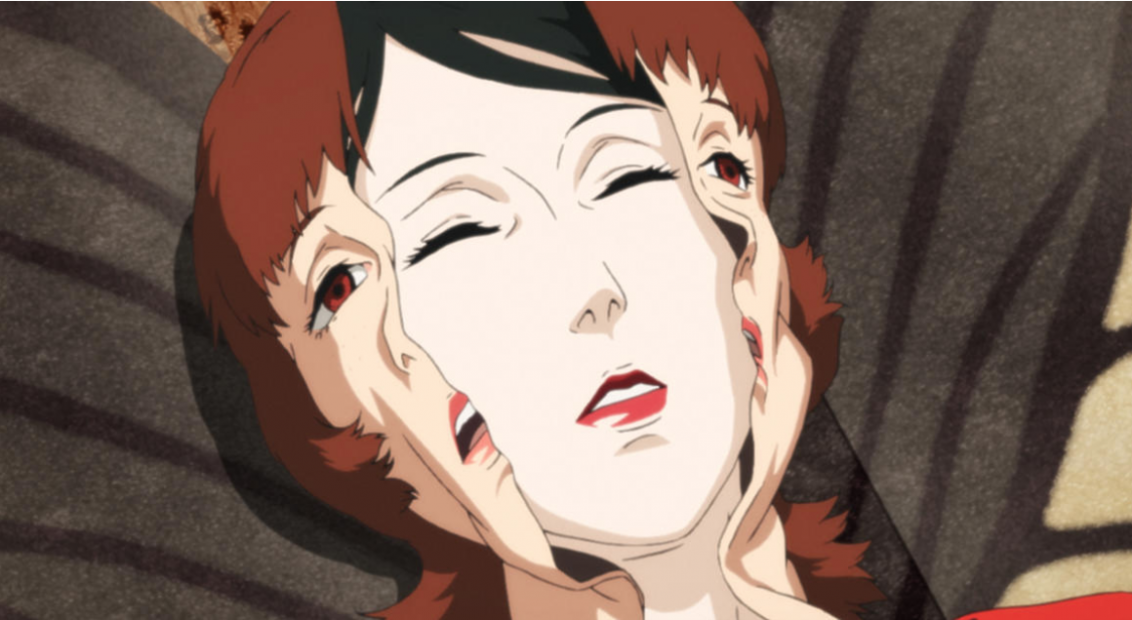 Speculating on the dystopian effects of technological progress is something of a modern pastime. It’s a natural reaction to the world we find ourselves in: where smart-phones and social media dominate our waking lives,  algorithms decide elections and personal data is sold as a commodity. Concerned parties can choose from different viewing options to channel their existential angst, from films such as Ex Machina to TV shows like Black Mirror, Years & Years and Love, Death & Robots.

One event riding this wave of technological pessimism is the Barbican’s Anime’s Human Machines film season (September 12-30), which promises to use themes of “robots, cybernetics and AI… to explore complex moral and social questions… greed, short-termism and failure to care for the ecosystem”. 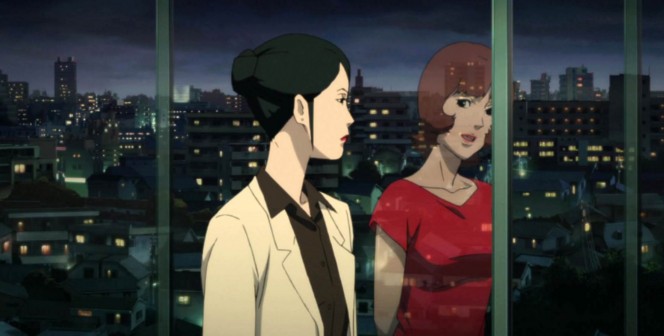 Given this remit, it is no surprise to see a Satoshi Kon film somewhere on the list. Having begun his career under the guidance of Katsuhiro Otomo, the godfather of science-fiction anime, by 1997, Kon had directed his first feature, Perfect Blue. Over the next decade, he would go on to build a small yet diverse directorial filmography (Paranoia Agent, Tokyo Godfather and Millennium Actress), sadly cut short by his untimely death in 2010.

Though his work is concerned with notions of science-fiction, regularly mediating the boundary between technology and humanity, Kon often shunned the overt futurism of his mentor, opting instead to portray worlds that are grounded  in reality and bear a contemporary resonance to our own.

From the director’s groundbreaking oeuvre, Kon’s final feature, Paprika, has been chosen by the Barbican to illustrate how issues of robotics, cybernetics and artificial intelligence were embraced by Japanese animation as a means of questioning future moralities. Despite a relatively modest budget of $4 million, it is his most ambitious work. Paprika follows a group of scientists who have pioneered a radical new tool for psychotherapy treatment: the DC Mini, which allows therapists to enter a person’s dreams and analyse their subconscious mind.

One such therapist is Dr Atsuko Chiba, who ventures into patients’ dreams as her magnanimous alter ego: Paprika. The project is disrupted when a prototype is stolen and its invasive potential misused to send people mad. In response, Paprika is forced to become a dream detective, sifting through a network of psychic worlds to discover the perpetrator. 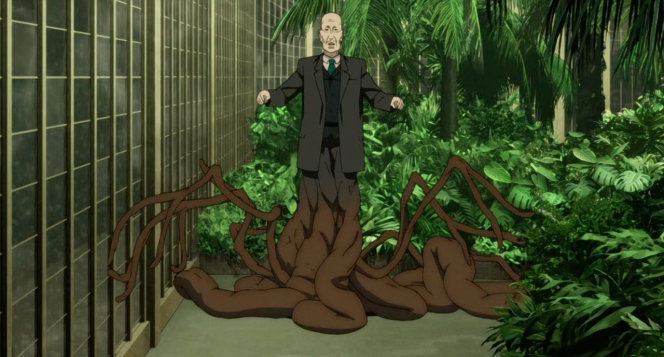 The subject matter affords a degree of visual freedom that is expertly used to portray a world of psychedelic dreamscapes. Nowhere is this better demonstrated than a parade scene that recurs throughout the movie, featuring a maniacal retinue of laughing Buddhas, dancing microwaves, frog marching bands and schoolgirls with flip-phones for faces.

Lurking behind Paprika’s striking appearance is a narrative saturated with meaning and symbolism. A recurrent theme is the transgressive nature of technology. Dreams, as one character says, “are sacred”. Scientific intrusion on consecrated ground provides undeniable opportunities for knowledge but is also dangerous and potentially ruinous. As a result, characters’ identities are thrown into disarray, becoming fractured (in the case of Paprika) or altogether destroyed. 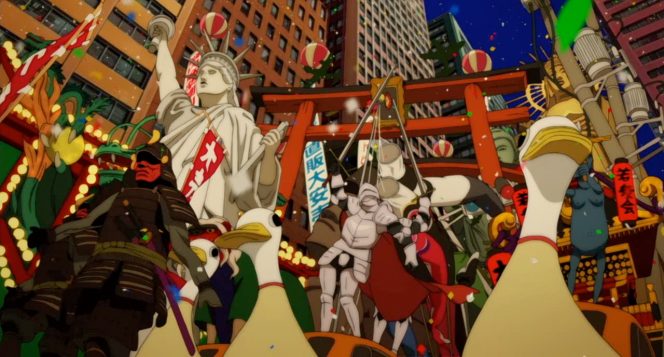 These ideas are reminiscent of Kon’s first (and possibly greatest) film, Perfect Blue, which follows Mima, a Japanese ‘idol’ who leaves her life of squeaky-clean pop-music stardom to become an actress in a racy soap opera. One of Mima’s fans, a strange-looking man known as ‘Me-Mania’, is frustrated by her changing persona and begins to terrorise her with a traditional array of creepy-stalker tactics: intimidating anonymous messages and heavy-breathing down the phone.

Most unsettlingly, Mima discovers a website – set up by her stalker – that is written from her perspective and lists her daily actions with unwavering accuracy. Mima’s torment manifests as a visionary alter ego, dressed in the same outfit she once wore as a pop star. Soon Mima is unable to separate fantasy from reality, and the lines between her multiple incarnations (actress, soap opera character, hallucinatory doppelganger and internet persona) become blurred, culminating in a strange and ambiguous ending. 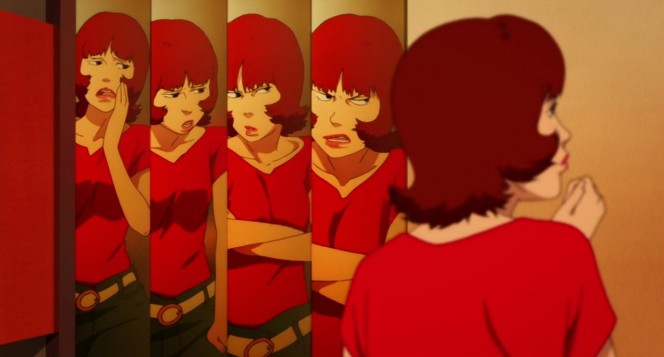 Here, as in Paprika, technology is responsible for the fracturing of identity. Most noticeably, it enables her stalker. Me-mania uses of a range of devices – camcorders, phones, fax machines and computers – to project a separate identity on to Mima that is in line with his own interpretation of her previous chaste persona. The website is a direct metaphor for this process; Mima’s identity is transposed from her person to her computer screen.

This theme recurs throughout the film; Mima is constantly rendered on screens or seen as a reflection. There are moments when we watch her in (what we believe to be) ordinary life, only for the camera to pan out and reveal the edges of a monitor and the trappings of a film set. The camera, like the internet, robs Mima of her agency, reducing her to an object for different observers: her fans, her director, her stalker.

Of course, the key observer is the audience, us; a fact that Kon skilfully reminds us of by shooting parts of the film in a 4:3 ratio. As he described in one interview, this was done to give the impression that “all of the events were taking place within a TV screen of some kind.” 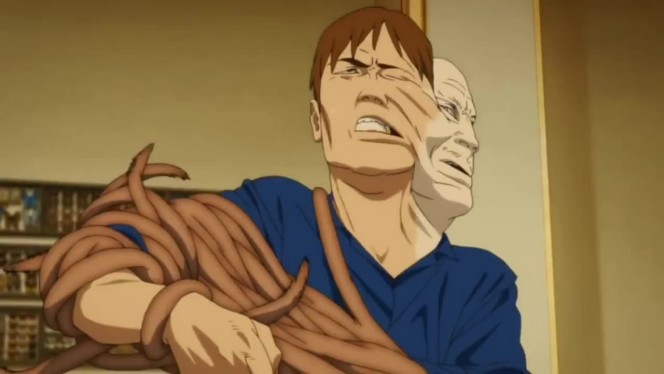 Ultimately, both Paprika and Perfect Blue present a pessimistic and complex view of the future, one that is in line with our modern interpretation of digital dystopia. Kon’s technological speculations are even more impressive given that Perfect Blue was released more than twenty-years ago, and Paprika less than ten-years after this. While we may not yet be able to access our dreams with the DC Mini, and while our psyches are (hopefully) safe from cyber-stalkers, the dark technological future that Kon imagined certainly does seem to be creeping ever closer towards reality.

Anime’s Human Machines is on at Barbican Cinema from 12 – 30 September. Paprika will be screened on 30 September. For more information on other screenings, times and tickets click here.