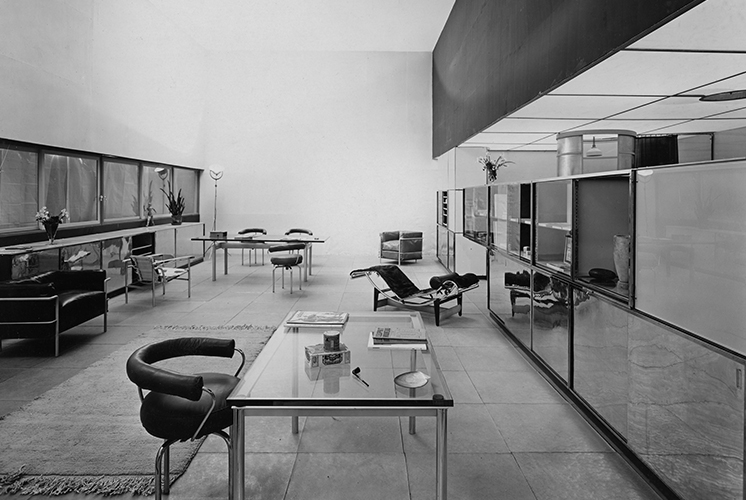 Twelve of the most exciting exhibitions arriving this Autumn

Autumn is always a great time for exhibitions. As the summer draws to a close and we head towards the colder months, ducking into a gallery for a few hours and getting lost in art becomes all the more enticing. This year, the art capitals of London, Paris and New York are promising to see in the season with a hefty roster of new exhibitions to get your teeth stuck into.

From Bridget Riley’s disorientating patterns to Soho’s seedy underbelly, we’ve done some digging to unearth the must-see exhibitions keeping you cosy this Autumn. So without further ado…

British sculptor Antony Gormley doesn’t do anything by halves. He is perhaps best-known for his 200-tonne Angel of the North a stone’s throw from Gateshead and his 2009 Fourth-Plinth project, in which  2,400 members of the public occupied the vacant plinth in Trafalgar Square for an hour each across 100 days.

This September, the Royal Academy of Arts’ Main Galleries will be showcasing work from Gormley’s 45-year career alongside major new installations exclusively designed for the exhibit. Featuring Gormley’s use of miscellaneous organic, industrial and elemental materials; a selection of his preliminary sketches; and excavating some rarely-seen works from the 70s and 80s, it will be, without a doubt, his most ambitious display in over a decade.

The RA outlines Gormley’s conceit as an invitation for visitors to ‘slow down and become aware of their own bodies’. Lost Horizon I does exactly that. It features 24 life-size cast iron figures arranged in a disoriented anarchy, forcing the observer to rethink their perception of gravity.

Antony Gormley will be on display at the Royal Academy of Arts 21 September – 3 December 2019. 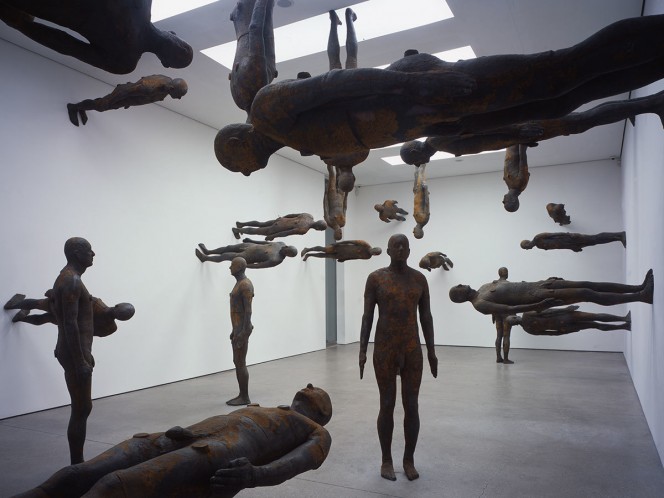 Nam June Paik at Tate Modern
Tate Modern is continuing its allegiance to the experimental and innovative this autumn with a retrospective of over 200 works that map out the life and career of South Korea’s visionary Nam June Paik.

Paik’s radical engagement with mass media and new technology has earmarked him as a cornerstone artist. An early pioneer of TV and video mediums in his work, Paik’s influence on contemporary art and culture remains supreme. Prescient and at times prophetic,  his coining of the phrase ‘electronic superhighway’ predicted the onset of our digital age.

The Future is Now will bring together over 200 works from Paik’s 50-year career and will exhibit his wide-ranging creative projects. From recycled robots to immersive large-scale installations such as the Sistine Chapel 1993, the exhibition will also pay homage to Paik’s collaborative projects with cellist Charlotte Moorman, and other artisans including John Cage, Merce Cunningham and Joseph Beuys. 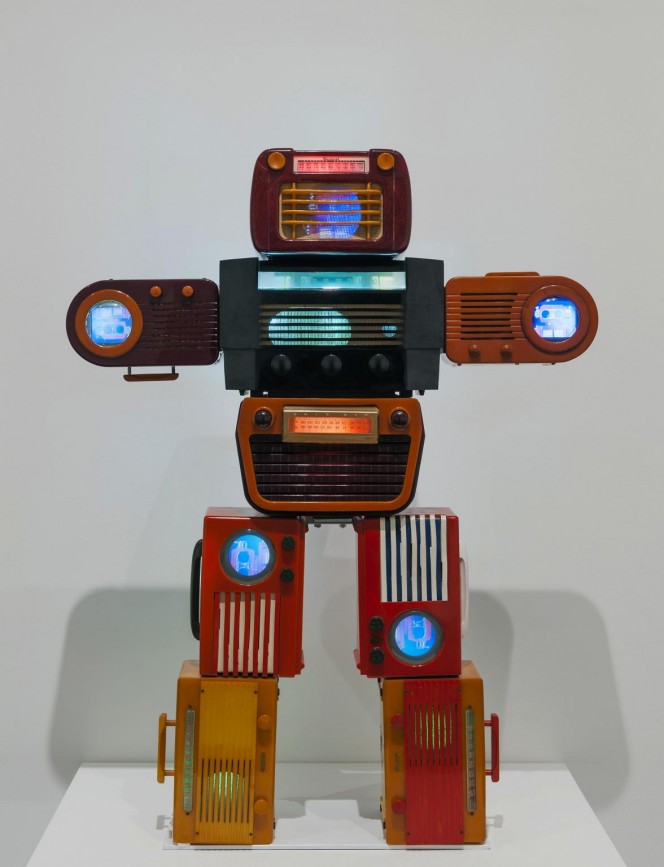 Bridget Riley at the Hayward Gallery
You hear op-art, you think Bridget Riley. In partnership with the National Galleries of Scotland, the Southbank Centre’s Hayward Gallery is exhibiting a retrospective collection of iconic works produced throughout Riley’s 70-year career.  Through a myriad of Riley’s artistic endeavours (early paintings, large-scale canvases, experimentations and materials), the display will delve into the genesis of her abstract paintings while examining the pivotal shifts in her career and style. In addition to Riley’s most acclaimed canvases, Continuum (1963) will also be exhibited – the artist’s only 3D piece.

Recommended for those with a penchant for a dizzying, disorientating, yet powerful dose of zeitgeist 60s verve. 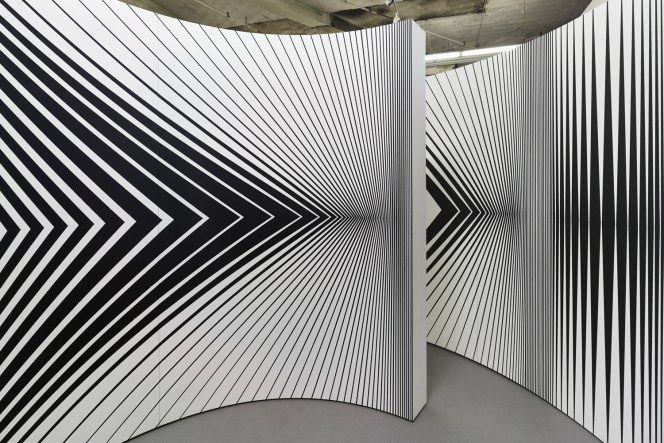 Zandra Rhodes at The Fashion and Textile Museum
Now one of Britain’s most celebrated designers, Dame Zandra Rhodes founded her bold design house in 1969; starting small with a capsule collection of pop-art prints, the Kent-born designer soon branched out into distinctive patterns and silhouettes that reflected the freelovin’ culture of 60s Britain.

Spotlighting Rhodes’ formidable oeuvre and ongoing influence – that stems far beyond the fashion sphere – the Fashion and Textile Museum is holding a retrospective celebrating 50 years of the designer’s eponymous label, drawing together 100 groundbreaking looks and 50 original textiles. Here’s a fact: Rhodes actually lives on the top floor of the same building as the Fashion and Textile Museum – so if you time it right you might bump into her on the way to the shops. A’up, Zandra!

Shot in Soho at The Photographer’s Gallery
As an epicentre for all things mad and risqué, London’s Soho area has a long cultural history grounded in all things energetic, hedonistic, and utterly bizarre. Sadly, in recent years this unique and authentic heritage has suffered, much like the rest of the city, at the hands of gentrification and consumerism.

Celebrating Soho’s golden years, The Photographer’s Gallery is exhibiting Shot in Soho, bringing together images from renowned photographers such as William Klein, Anders Peterson and Corrine Day, alongside other Soho-frequenting photographers such as Darahg Soden and Clancy Gebler Davies. Through a medley of photographic practice, ephemera and presentations, the exhibition will showcase the history, legend and sundry personalities of the capital’s wild hotspot.

Once you’ve taken in the exhibition, we suggest hitting up Trisha’s – Soho’s best bar and one of the few remaining vestiges of the area’s eccentric past. 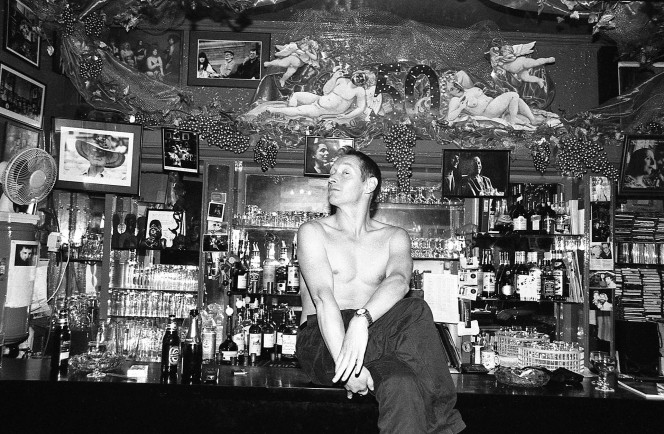 A keen lover of music, Chaplin would often recall his early childhood in which his mother, a music-hall singer, would take him with her to the theatre, where he would stand in the wings listening to her and the other acts that made up the show. Immersed in music from a young age (his father was a well-known vocalist), Chaplin was later recruited by Fred Karno (the biggest British impresario of cabaret shows) aged eighteen and performed in a variety of music-hall staples before finding his niche.

With a real understanding of rhythm and dance, it’s no surprise musicality translated into his silent cinema. Analyses of Chaplin’s penchant for rhythmic dance, and the illusion of speech and sound suggest music as an integral component of his meticulously orchestrated film conceptions, never mind that immaculate comic timing. 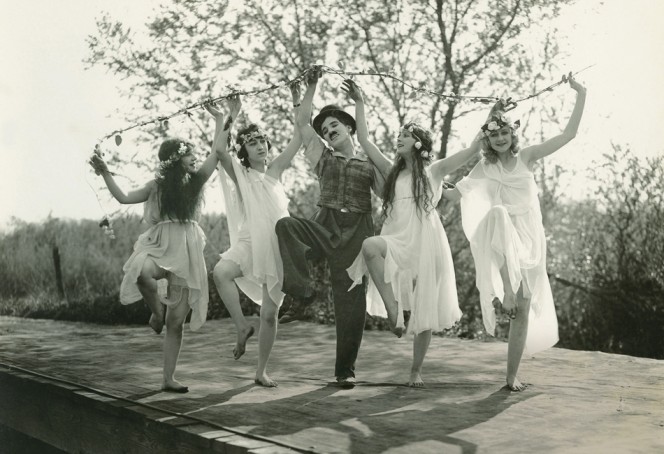 With the current public dialogue traversing the role of women in society (rightfully so), both Perriand’s architecture work and her pioneering vision of a ‘synthesis of the arts’ feels particularly poignant and is keenly explored within this exhibition.

Known for juxtaposing her pieces with artwork from the likes of Fernand Léger, Pablo Picasso, Hans Hartung and Alexander Calder, here Perriand’s exhibitions and interiors have been reassembled to her exact blueprint, allowing visitors to see these works in full-size. Across almost 200 pieces by the architect – including several of those she created with such well-known collaborators as Le Corbusier and Pierre Jeanneret – we’re able to trace her design progression in tune with the evolving politics and art of the time, as well as Perriand’s own.

It’s a refreshing take on the avant-garde, and what better location to show Perriand’s work than in Louis Vuitton’s incredible Frank Gehry-designed Fondation

The Fondation Louis Vuitton will be showing Charlotte Perriand from 2 October 2019 – 24 February 2020. 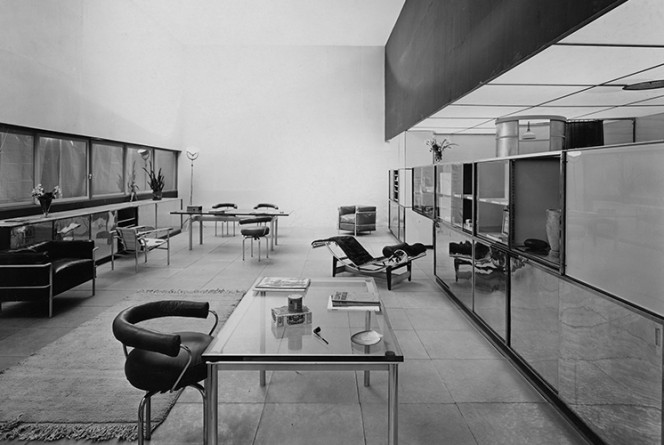 Sur moderno at MoMA
Following a mini-hiatus the MoMA is reopening this October and once fully renovated to its former glory, one of the first exhibitions on the cards is Sur moderno: Journeys of Abstraction – The Patricia Phelops de Cisneros Gift.

Drawn predominantly from the paintings, sculptures and sketches donated to the Museum by the Coleccion Patricia Phelps de Cisneros, the exhibition will trace the history of abstract, contemporary and concrete art from South America during the mid-twentieth century. In an impressively comprehensive collection, the display’s focus is the transformative power of abstraction in Brazil, Venezuela, Argentina and Uruguay. A particular emphasis will be placed on how art (as object and as conceit) renews and is renewed in an evolving social milieu.

The exhibition’s final section is dedicated to the grid, one of modern art’s core themes of experimentation. Gego’s Square Reticular 71/6 (1971) and Helio Oiticica’s Painting 9 (1959) showcase two different ways in which transformation and expansion of the delimited grid – Gego skews the calculated structure, whilst Oiticica interrupts the geometric outline with arbitrarily places rectangles.

Sur moderno: Journeys of Abstraction – The Patricia Phelops de Cisneros Gift will be showing at the MoMA 21 October 2019 – March 2020. 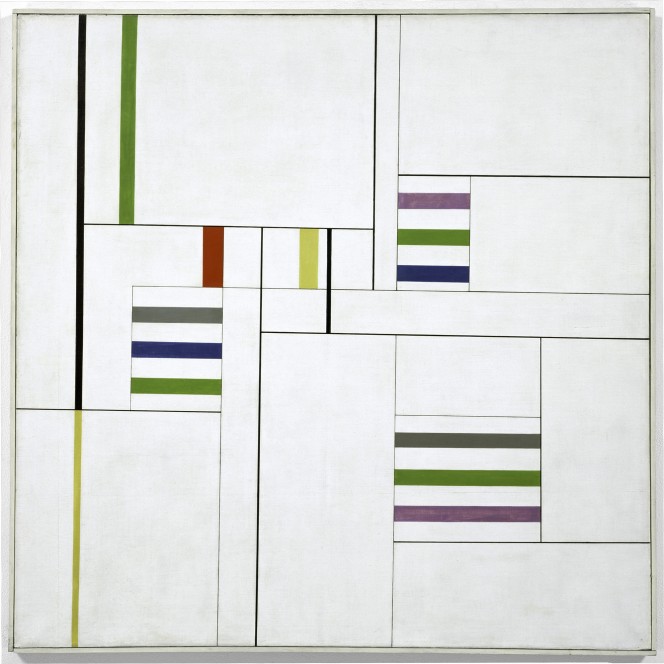 Pope.L at MoMA
Also in the wings at MoMA is member: Pope.L, 1978-2001. Born in 1955, William Pope.L is a provocateur whose mediums of choice span performance, painting, drawing, installation, theatre, and video. The focus? To highlight the absurdities and satirise pious systems of belief.

This exhibition will gather career-defining pieces from Pope.L’s most yielding creative years: 1978-2001. Featured works will include Egg Eating Contest (1990), Aunt Jenny Chronicles (1991), and Eracism (2000), in addition to street interventions such as Thunderbird Immolation a.k.a. Meditation Square Piece (1978), and ATM Piece (1996), all of which contribute to his running commentary on the social, cultural, political and economic shifts in 80s and 90s New York. An arduous and rebellious agitator and humorist, Pope.L’s approach jabs at the division and inequality on the streets of America – needless to say, recent decades have provided a lot of material to work with. 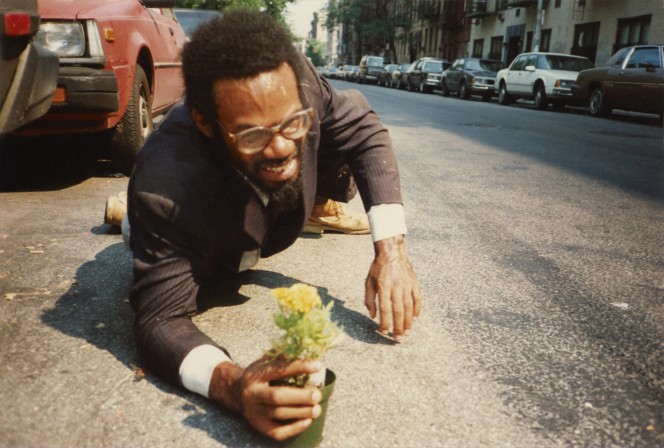 Tim Walker at the V&A
Synonymous with his surreal and dreamy aesthetic, Tim Walker’s unique eye has seen him become one of fashion’s most magical photographer’s, creating wild visual narratives that place fashion in a whole new context.

Delving into Walker’s impressive oeuvre, a new exhibition at the V&A celebrates the diversity of his work, from pictures to films, photographic sets and installations. In addition to this, attendees will be privy to ten new photographs from a series by Walker influenced by the V&A’s collections. 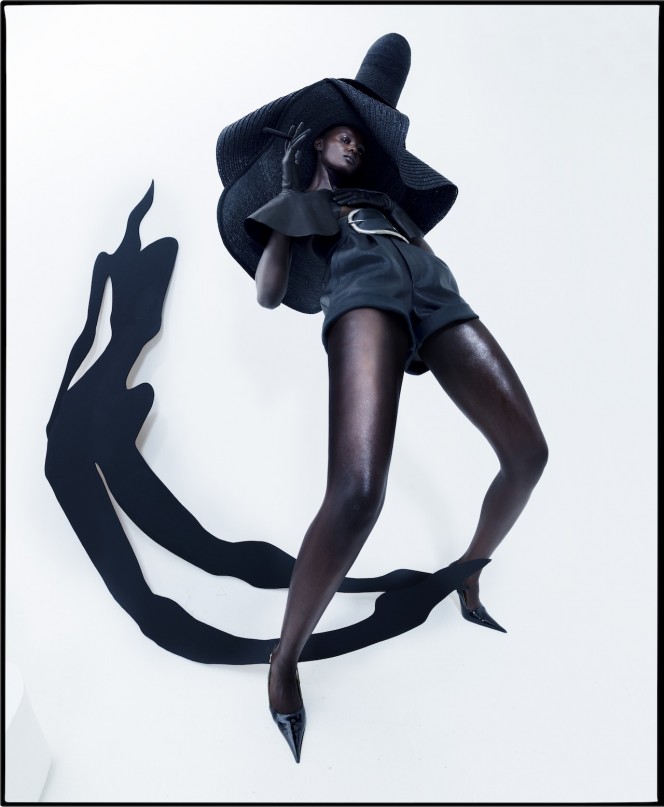 Colony Sound at Marlborough Gallery
New York-based artists Jonah Freeman and Justin Lowe have transformed Marlborough Gallery into a labyrinth of vivid worlds for their new show, Colony Sound. From meth labs to hippy communes, visitors are encouraged to move through each painstakingly constructed scene and conjure their own narratives.

Experts at playing between the lines, evading straightforward classification, Freeman and Lowe juxtapose counter-culture with industrial production, nihilism with materialism, the occult with tech industry to create an exhibition you can truly lose yourself in – and we thoroughly advice doing so.

Read our full interview with Freeman and Lowe here. 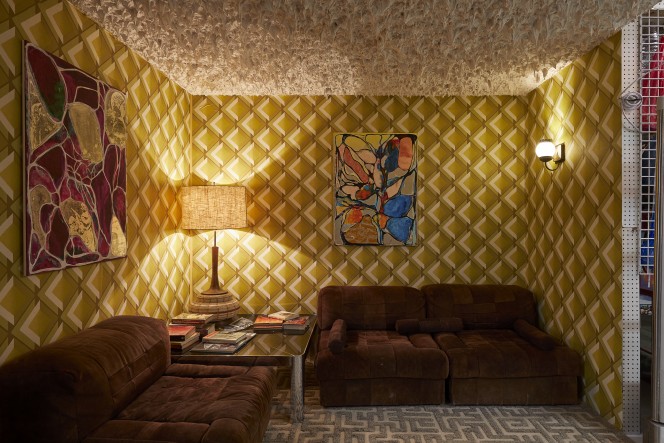 Monty Python at BFI
And now for something completely different… the mastermind creation of Graham Chapman, John Cleese, Terry Gilliam, Eric Idle, Terry Jones and Michael Palin, Monty Python turned absurdity into a radical artform, and comedy gold. Need proof? The term ‘pythonesque’ (the uncanny ability to shred just about everything under the sun using absurdist wit and black humour) is now firmly lodged in the standardised dictionary, and if it’s possible to Monty Python-ise an object – whether a board game or a theme park ride – it’s been done.

This September, the British Film Institute have dug deep into the Python archives and unearthed gems, orchestrating an impressive programme that moves through the group’s vast archive, plus behind the scenes footage from some of the sextet’s best-known sketches, never-before-seen papers, publicity and photography, and select screenings of films and shows that influenced the group.

Monty Python season will be on show at the BFI from 13th September – 13th October 2019. 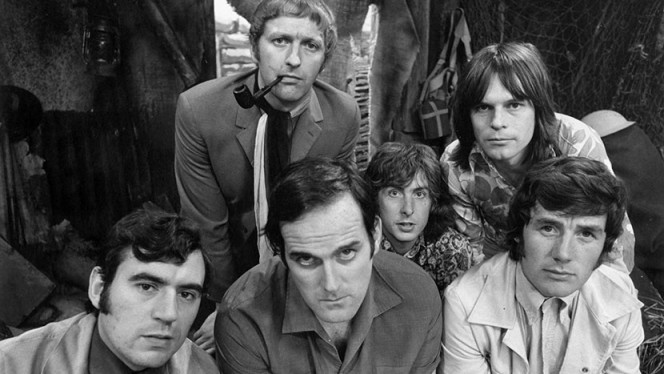