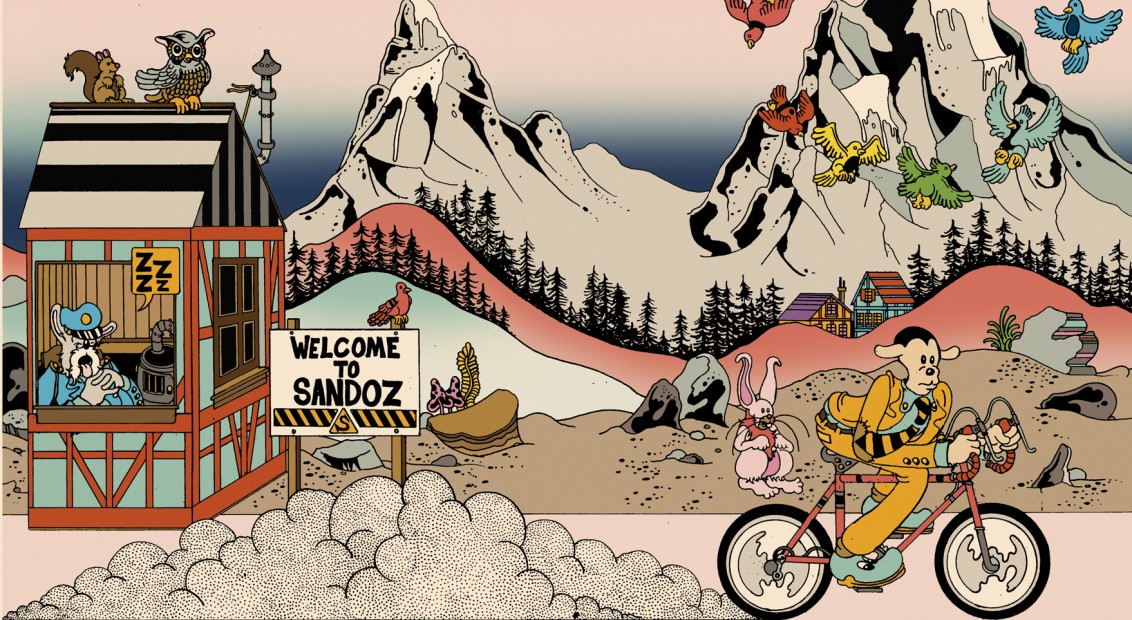 He would later recall how the ensuing hours spent lying on his bed were characterised by, “an extremely stimulated imagination” through which he “perceived an uninterrupted stream of fantastic pictures, extraordinary shapes with intense, kaleidoscopic play of colours”. Three days later, he intentionally ingested 250 micrograms, and as he cycled home from his lab, the drug kicked in and Hofmann experienced the world’s first intentional acid trip.

76 years on, you’d be hard-pressed to find an artist more suited to detailing Hofmann’s trip than Brooklyn-based cartoonist Brian Blomerth. Through his surreal and psychedelic illustrations, Blomerth’s debut graphic novel, titled Brian Blomerth’s Bicycle Day, drops in on Albert Hoffman’s iconic acid experience and retells it in unique form. Combining the nostalgia of science textbooks with an experimental children’s book, the vintage-looking paperback is filled with pen drawings, digital overlays, and collage, bringing to life Hofmann’s altered reality and taking us along for the ride. 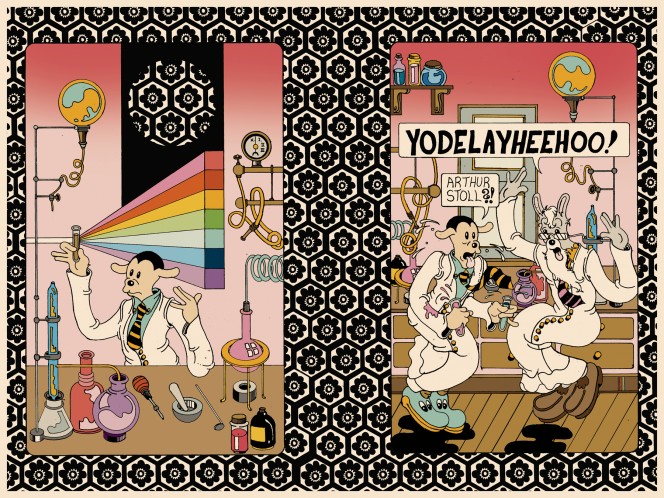 Clementine Zawadzki: It’s wild to think this happened in 1943. What impression did you get of Albert from his story?
Brian Blomerth: I really came to love all things related to Albert Hofmann through doing this book. From all I’ve read, he stayed curious and interested in a variety of topics throughout his life. He really wanted LSD to be researched and studied fully, and had some ideas that are only now being explored though proper psychedelic research studies. He loved nature and he loved his family… I tried to paint him in the best light possible, and well, he made that easy.

CZ: Was creating a book always on your wish list?
BB: I wanted to do a biography of somebody, because there are a lot of things that make a biography pretty funny. I was watching a documentary on LSD and it started with Albert saying, “The first acid trip was like a nightmare for me,” so I was pretty interested in that. I thought it was a pretty noble, weird, important story, so I decided to go for it. Ultimately, I would like it to be fitting for him or just a nice addition to his memory.

There is a card you can cut out to donate to MAPS (Multidisciplinary Association for Psychedelic Studies) which is a great non-profit for legalising and investing in legitimate Psychedelic Research. They also translated and released Hofmann’s book, LSD: My Problem Child into English and with that being the main basis for most of this book, I owed them. Also, they do great work, and if I can get a couple of people to donate to them with my one shot at a book… well, I’ve done something right for the universe. I also included a little spiel on the Hefter Research Institute, they are also a great group with similar aims.

CZ: What visual works or artists inspire you?
BB: For this book, I really wanted it to feel like a children’s book both in format and design. A lot of the visual ideas are from books I remember reading as a child that I have no idea who the illustrators are or what the books are even named. I wanted to reach back and pull visual tropes that are sort of half-remembered. Obviously, Richard Scarry was a big influence for this one, with the Swiss connection. Carl Barks and Suihō Tagawa are always on my mind. The whole “funny animal” canon is a strange world I would be happy dancing in for my whole life if I could help it.

CZ: There’s definitely synergy between the story and your style of illustration. How did you work out how much of yourself to put into it given it’s Albert’s experience?
BB: This one was different because I made an outline for the first time ever, and due to it being historical, I basically went through his autobiography and highlighted everything that was interesting or relevant to me. I guess I kind of filtered his biography in a different way than most people treat biographies. For starters, I don’t think most people would be freaking out about what he ate for lunch, and I definitely did. I mean, he loves milk and had it every single day! Basically every chapter has milk involved. Those are the kind of things I really gravitated towards here. 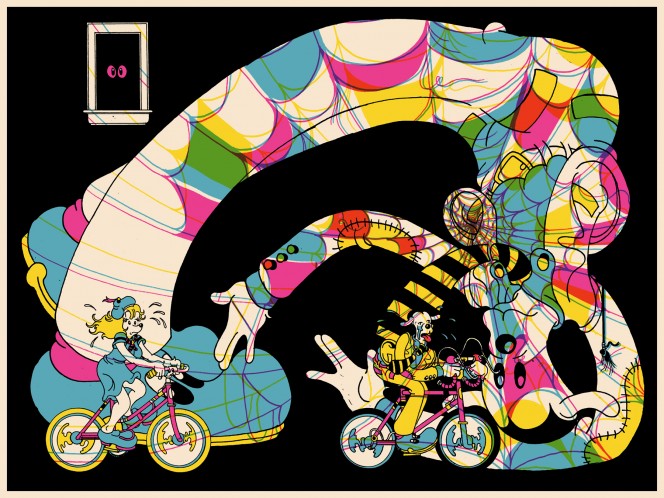 CZ: Did anything else stand out to you?
BB: Basically Sandoz [the pharmaceutical company where Hoffman was employed upon making his discovery] was a chemical factory that dabbled in pharmaceuticals, but the pharmaceutical department wasn’t doing so hot, and his boss was this guy, Arthur Stoll. So, there’s three chemists that work there, but they didn’t have a proper ventilation system, so Albert complains a lot in his book that he was constantly getting poisoned, and it’s amazing how many times he mentions it in his book. Also, a detail I didn’t get to slide into the book, because it wasn’t really that important, is it turns out so many Swiss people loved building radios as a hobby. His wife Anita’s brother built radios as a hobby, and so did Paul Hermann Muller [Nobel Prize-winning Swiss chemist]. I don’t know why they’re all building radios, but I love that.

CZ: It’s visually fun and playful, but contextually it’s also honest…
BB: Yeah, I think it [aftermath of taking drugs] can go a multitude of ways and it would be wrong if I switched it around and made it all super nice. I tried to make it pretty harsh and egotistically damaging, like he described.

CZ: What is your process when approaching a drawing and was it different for this particular project?
BB: You set up rules and guidelines for a project. For this one the goal was, ‘Experimental Children’s Book on Acid.’ That concept informed the book’s structure, influences and visual.Hofmann’s life story obviously guided me, but once you have that, you need a rock to stand on while the wind blows in your face. There are some things, like the dogs as people, or the landscapes, or critters that have always been there, but throwing a little Swiss hat on em’? That was new. Like Hofmann, I want to stay interested and curious and always look for a new hat to throw on an old critter. I kind of viewed the critters as extensions of the landscape or little agents of chaos. I saw some bunnies behind a 7-11 one time and it really struck me that those little freaks were living back there. Seeing a critter and waving at it is the bread and butter of Psychedelia and Children’s books.

CZ: Albert mentions entering a world seemingly more real than reality. What would your alternate reality look like?
BB: That I don’t know about, but it would be really, really off-putting for me to be in a world that resembled my drawings. That sounds like a real panic attack. 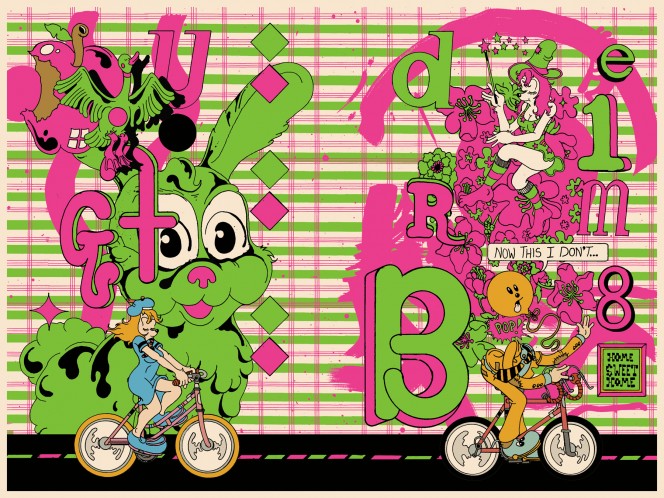