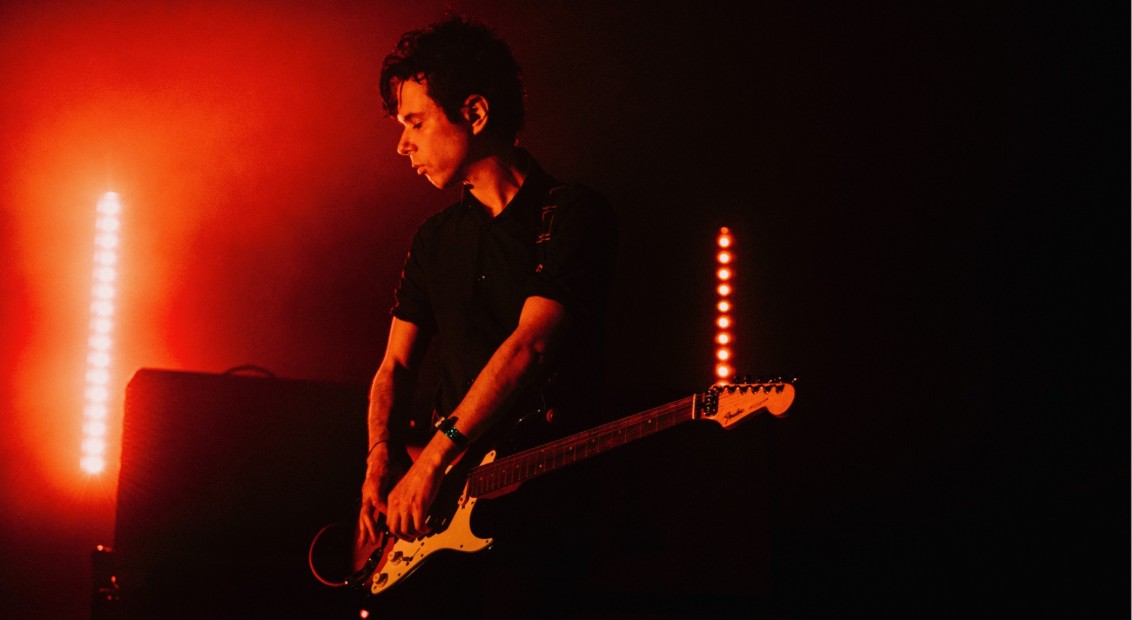 First written and performed in New York in 2011, the project was originally a collaboration with Hisham Akira Bharoocha and Ben Vida for an event to honor the 41st anniversary of Earth Day. Unexpected, beautiful, and evocative, the four-part piece symphonically explores and celebrates the transition of seasons (the Spring section is currently the theme song to HBO’s Vice). Although based on a classical structure, Zinner creates new textures with the injection of electric and acoustic guitars, drums, and synths to blend classical and rock ‘n’ roll grooves.

41 Strings has since been experienced by audiences at London’s Meltdown Festival (which included local musicians such as The xx’s Romy Madley Croft and Savages’ Gemma Thompson) and the Sydney Opera House. With the return of 41 Strings to New York, Zinner has gathered a legendary roster of local musicians who have shaped the scope and legacy of the city’s soundscape, including Paul Banks (Interpol), Jaleel Bunton (TV on the Radio), Nancy Whang (LCD Soundsystem) and Brian Chase (Yeah Yeah Yeahs).

Here, Zinner talks us through the performance and the emotional pull of bringing 41 Strings to New York.

J.L. Sirisuk: You’re bringing 41 Strings back to NYC, can you tell me about its initial conception and how the seasons inspired the piece?
Nick Zinner: I wanted to keep it in the tradition or lineage of the events that had proceeded it for this specific performance. There used to be this clothing company called Rogan in New York – I think they still exist but I’m not sure – who organised performances in celebration of Earth Day. For the 40th anniversary, they did an event called 40 Drummers that Hisham [Akira Bharoocha] had led and composed. When they approached me for the 41st anniversary to write something with the idea of strings as the theme, I met with Hisham and bounced ideas back and forth with him. He agreed help me with this piece, and it seemed like utilizing the same framework of dividing it up into four pieces was something that obviously felt appropriate for an Earth Day composition. It fit a precedent that had been partly established.

“I think there’s a part of me that lost hope in being able to perform this piece again because it involves so many people.”

JLS: When you were thinking about the seasons, how did you know which to start with?
NZ: I was actually thinking about that today while getting ready for rehearsal. 41 Strings starts with fall and it was actually written in the same order that it’s presented; starting with fall and ending with summer. I was noticing the compositional evolution of the pieces, like the first one is very simple – it’s two or three parts – and when I got to summer I was more confident and so its more complex. I feel like if I’d started with a different season, it would have been a totally different piece. I was talking to somebody yesterday about how I feel like when you live in New York City as opposed to LA – where I live half the time now – you really feel each season so strongly. It affects absolutely everything you do, the way you feel, your wardrobe and your social activities. I was trying to think of those general themes that I experience and every New Yorker experiences in association with each season. 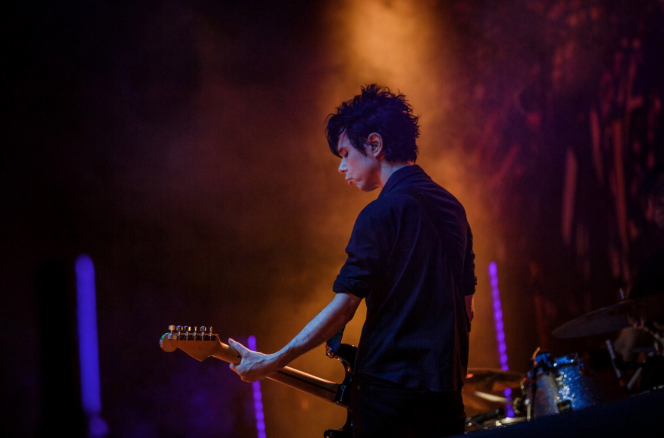 JLS: Do you have a favorite season?
NZ: I think I’m a fall, winter guy. I like the beginnings of winter.

JLS: How did the creative process work between  Hisham, Ben and yourself?
NZ: We worked on Spring altogether, we basically jammed for a few hours – Ben plays keyboards and Hisham on drums We played around for a few hours and there was a really strong idea that developed into the section that became the basis of the piece. For all the other ones and the full development of Spring, I was in my old studio space on Bowery every day for a month writing.

“We’ve made people cry in every continent we’ve performed…”

JLS: When you record an album and go on tour, you have more time to experiment with the live performance element – with 41 Strings, you’ve only performed it live on three occasions. How would you describe its evolution?
NZ: When you write something notated, deviating from what’s written is challenging, because you’re working with accomplished string players who can sight-read. You can’t really add bars or tweak things too much. We have one rehearsal and the string players sight-read it and it’s fucking amazing. The exciting way I’ve been able to make it different each time is by choosing the guest musicians and guitar players. It’s written to have eight guitar players and I play also, so each time we do it I spend a few months trying to find the seven guest guitarists. It’s exciting because sometimes you get to meet people and broaden everybody’s musical friendship. 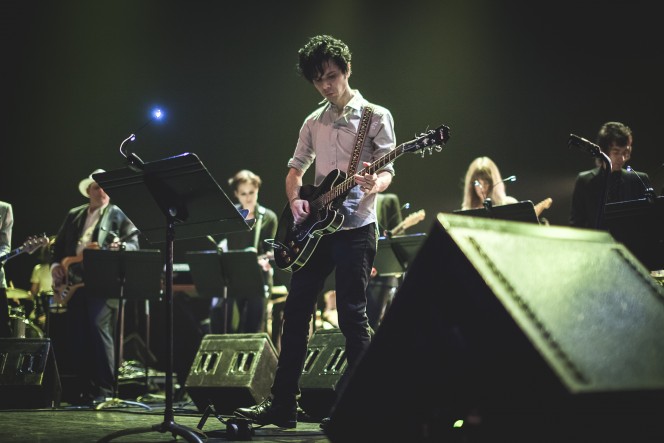 JLS: How did you determine who you wanted to bring to the lineup for this NYC performance?
NZ: A very important quality to think about when choosing people for this is discipline. I know lots of guitar players who are brilliant because they don’t follow any rules. Like I was saying before about sticking to the page for sheet music, it definitely requires a lot of discipline and concentration. We thought it would be really cool to get a broad range of musicians who represent New York, so I think it’s a pretty good age group and diversity. Some people I know and some people I’d never met before.

JLS: This project has been taken to London and Sydney – how have you found the reception? I think somewhere I read that your goal was to make people cry with this piece.
NZ: We’ve made people cry in every continent we’ve performed, which I’m very proud of. But beyond that, every time we’ve performed the piece there’s been a large group of people who’ve come to see it not really knowing what to expect, just going in open-minded for this weird and hopefully beautiful and powerful experience.

JLS: How do you think bringing in these different guest musicians contributes to a change in sound?
NZ: It’s a living, breathing thing, so everyone who plays makes it theirs. Growing a really strong group dynamic that you get from spending a couple of days with everyone creates own little social group for a while. This is really fun for musicians to hang out with each other, with people who might not necessarily cross the same paths. I think all those things in some ways lend themselves to making that performance unique.

JLS: Has the experience with this project influenced your outlook and approach to other facets of your creative work?
NZ: I’d never written anything on that scale so it was a massive challenge. It’s made me want to tread into more unchartered territories, like film scores, which I’m trying to do more of, and ongoing collaborations – taking risks and trying things out with musicians that you don’t know and seeing what happens.

JLS: And how does it feel to revisit this project and experience it again at this point in your life, especially for its homecoming?
NZ: I think there’s a part of me that lost hope in being able to perform this piece again because it involves so many people. It’s really hard to be able to present this sort of weird piece that’s not even released properly and requires 50 people to play it. No one’s really lining up to present something like this, so I’m thankful that I get to do it again and breathe new life into it, especially with all this new group of people. Enough time has passed between when I wrote it and now that I can enjoy it more objectively, really feeling how it felt initially, feeling the emotions in each particular piece. To be able to do that now is different. It’s really cool and maybe that is one step closer to what I hope everyone else feels who comes to it.

41 Strings will be performed for one night only on July 27th at Rockefeller Plaza.
The event is free and open to the public. News and updates here.