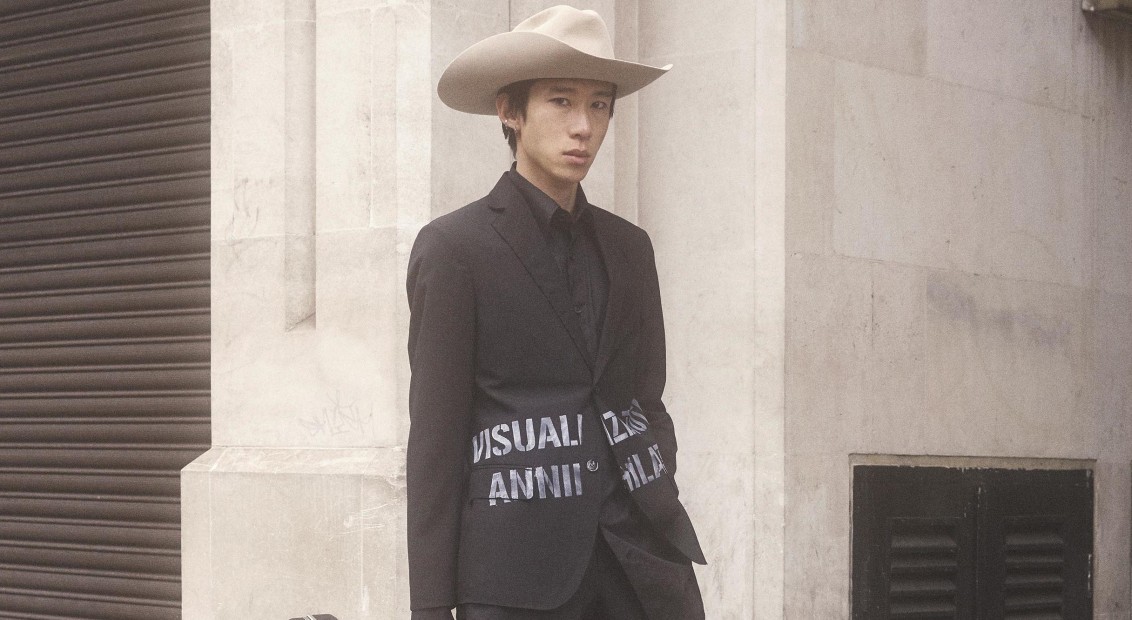 Greatest Hits (side A)

Greatest Hits (side A)

Titled Greatest Hits (side A), Yang Li’s SS20 collection saw him look inwards. Revisiting pieces from his own archive – created between 2012-2018 – the Chinese designer created reworked and remixed interpretations, as well as recruiting past collaborators and new artists to imprint their own ideas on his designs – including Genesis BREYER P-ORRIDGE, Godflesh, Michael Gira, Psychic TV, Ramleh, Swans, Torturing Nurse, Tropic of Cancer, Yung Lean and 左小祖咒 Zuoxiao Zuzhou.

Celebrating the first chapter of the brand’s evolution, the resulting collection is a collaborative tale of subcultural, music and underground references that have long informed the designer’s work and tastes: Godflesh’s album artwork appeared on a black hoodie, while Swan’s Michael Gira scrawled his message on black suiting in white caps, and patchworks dotted across a leather perfecto paid homage to all collaborators involved.

Below, Genesis BREYER P-ORRIDGE and Michael Gira talk us through their involvement with Yang Li’s SS20 collection. 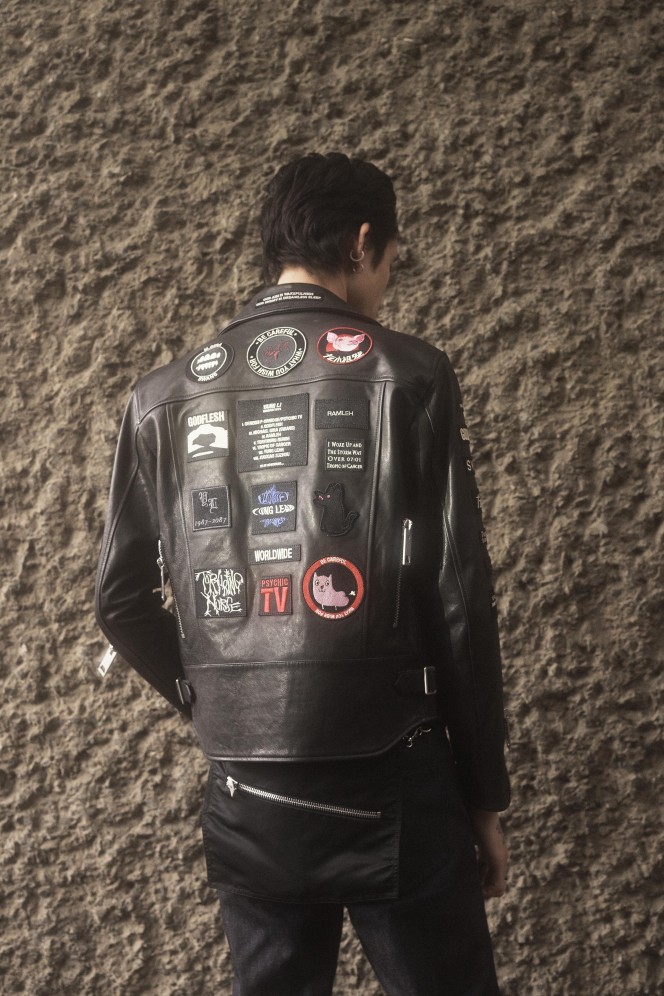 “A few years ago Yang contacted me asking that I perform at the premiere of his SS20 collection in Paris. I had never heard of him. I had no knowledge of the fashion world whatsoever. Put on the spot, I would have been hard-pressed to name a single designer. (Since then I’ve become familiar with Alexander McQueen, though mostly I admire him for the maniacal focus he applied to his art, no matter the consequences). However, Yang was persistent and has an obvious genuine appreciation for the music I’ve made, so I relented. Having performed for Yang at his event and spent some time with him, I could see that he is a true artist, and it was interesting to watch him conducting the various forces, chaos, and exigencies that demanded his attention during what must have been, for him, an incredibly stressful event. I suppose it’s something similar to being a film director. Myself, I felt like a dusty and somewhat grizzled hobo amongst these people who seem to inhabit a world more refined and polished than what I’m used to. Still, I felt perfectly comfortable performing, and I’m glad I did it… Recently, Yang asked me to supply a few lyrics that might be used in slogans for his new collection, as well as a few iconic images that I’ve used with my group, Swans. I was happy to do this as a brotherly gesture, but I had no involvement in the designs of his clothing.”

“Fashion for me is collaborative and conversational. Beautiful ideas and stories don’t get created whilst I’m locked in a room alone, I sometimes think of my brand as a platform to interact with other amazing creatives” – Yang Li 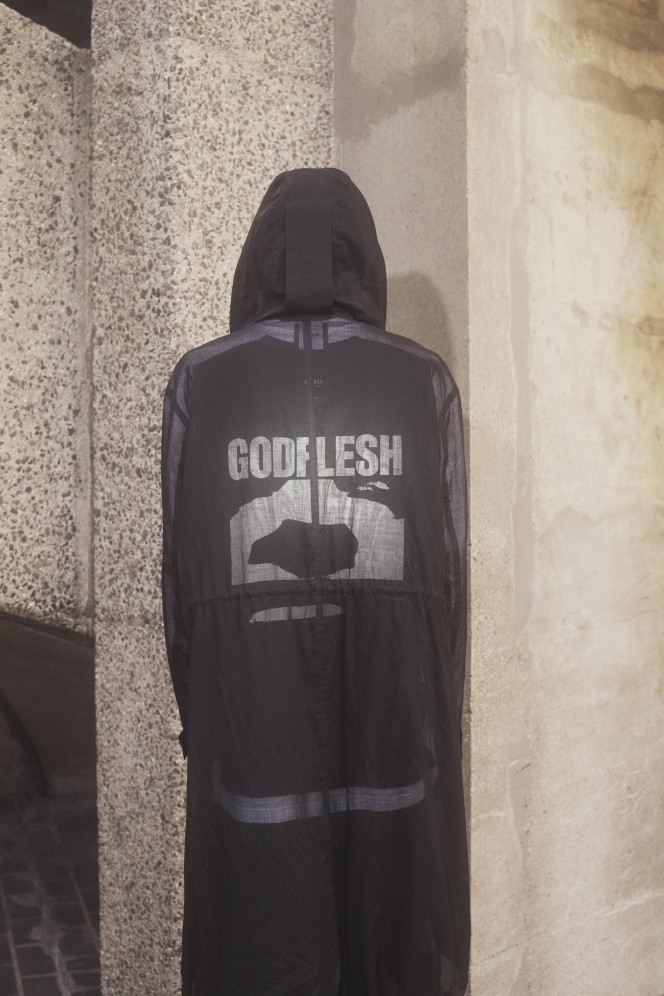 “We first heard of Yang Li when he contacted me via the internet, of course! My only forays into the world of fashion before that were a series of photographs I created for a book by Ted Polhemus called Fashion & Anti-fashion. My images expressed anti-fashion. I’ve always shied away from fashion. Partly because I could never afford any clothes I liked and partly because it seemed a contrived system to define elite groups from those less fortunate, working-class demographics. Fashion signalled aristocratic superiority. So I always dredged army navy surplus shops, found jeans for 50 pence (ten shillings back then), got surplus suede “desert boots” then died them in psychedelic patterns painted on by hand with inks. Later, in my Throbbing Gristle/industrial phase, with my then-lover and still friend Lawrence Dupre, who was a couture seamstress, we searched for rare and unusual camouflage items of clothing. What we liked was the utilitarian qualities. Function before fashion, my t-shirt said. Military camouflage was intended to make you vanish, not stand out. It was improved by dirt and mud, becoming more invisible and authentic. There were pockets galore to store equipment, clips of bullets, maps, making you a walking self-contained warrior. We imagined Throbbing Gristle as sonic warriors, genetic terrorists – a phrase I even made a rubber stamp of. Inevitably, in a way, Lawrence and I collaborated on ideas for new custom “couture” outfits for her and myself. Lawrence designed a camouflage based on fossils of ancient human remains. The colours were chosen, mainly greys, to blend in with urban warfare. Invisible against concrete and cement. Everything was hand screen-printed, hand-stitched by Lawrence who is a genius. We had gone full circle, perhaps inevitably creating fashion with our rebellion against it! When we saw Yang LI’s clothing we felt a kinship. Here was a person creating clothing within a context of the “fashion world and couture” yet pushing against its snobbery and preening. He is a fan of the most innovative music projects around. Where many newer designers rifle through street clothing evolutions for ideas to pilfer, Yang Li sees clothing as much through a musical phenomenon as through what people wear. Though music fan accessories are absorbed into his work. In my case, he was really inspired by my logos and slogans. Not just slogans that reflected my music but slogans that are spiritual and engender cultural CHANGE. I call myself a Cultural Engineer and my LIFE IS MY ART without ANY separation.

Everything that happens to me is potential raw material for a song, a book, a work of art, a tattoo. In a very real sense, all my actions and products resulting from my process can be traced to artist Brion Gysin’s technique of “cut-ups”. Assembling and disassembling everything around me as material to be repurposed. In a very real sense all we do and all we are is a collage… Yang Li was the first formal fashion designer to pick up on the relevance of my process to his exploration of clothing with an original new purpose outside of, even the antithesis of, fashion that expresses social and financial standing, which is anathema to me and always has been. We are a perfect fit. I get a kick out of knowing someone might pay hundreds of dollars for an item of attire by Yang Li that has one of my sayings like, “OUR AIM IS WAKEFULNESS OUR ENEMY IS DREAMLESS SLEEP”. Adding that slogan to a replica working man’s “donkey jacket” was a stroke of perverse, mischievous genius. Of course we collaborate with Yang Li…” 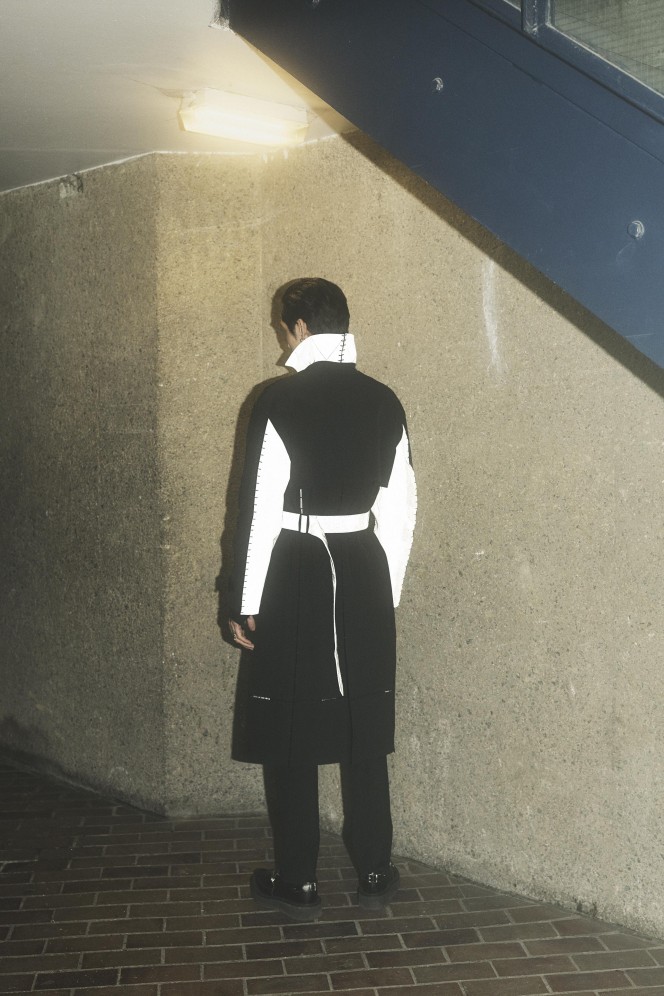