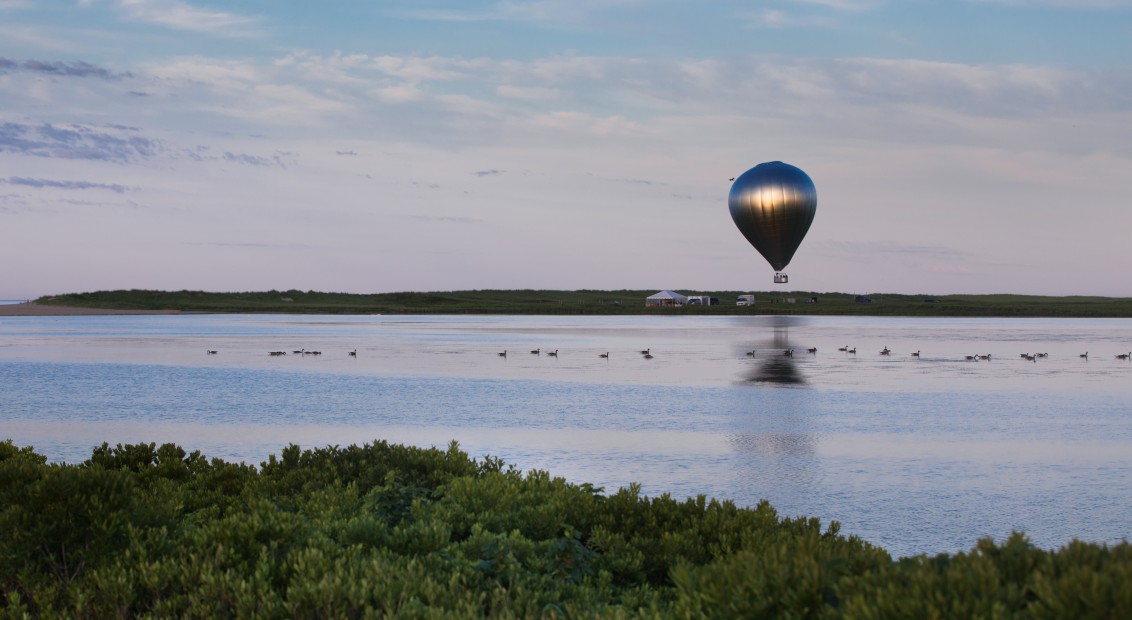 Artist Doug Aitken talks us through his floating balloon sculpture

Subverting the traditions of a fabled American pastime, US artist and filmmaker Doug Aitken has reinterpreted the much-mythologised road trip, constructing a 100ft hot air balloon rendered in reflective chrome that will complete its maiden voyage across the skies of Massachusetts.

Entitled New Horizon, the work is Aitken’s first public US commission and forms just one part of a two-week event conceived by the artist, taking place across the state of Massachusetts. Presented by non-profit conservationists The Trustees of Reservations, who preserve over 116 historical properties on 27,000 acres of exceptional natural beauty, the ballon – part floating sculpture part mirror to its surroundings – will initiate a series of events at ground level where it will be momentarily tethered before resuming its journey. From musicals acts, including Mac Demarco and Kelsey Lu to conversations on climate change, identity and information, the appearance of the ballon as it arrives at a selection of iconic Trustees properties will catalyse music, art, conversation and a collective sense of the future.

“In New Horizon, I wanted to create an artwork which was completely nomadic,” says Aitken of his project. “Taking the form of a 100ft reflective hot air balloon, the piece moves with thermal air and rides the wind, traversing the wide and diverse natural landscapes. With each new location, the work’s reflective surface changes, as will the perceptions of its viewers.” 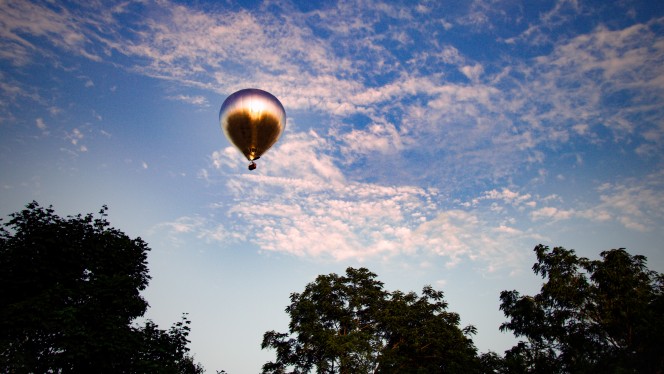 “I wanted each moment of New Horizon to be unique, so at each starting point of the balloon there is a ‘happening’, an intimate gathering with performances with diverse and unique musicians and conversations from leading polemicists and creatives exploring the future and our relationship with the natural world. At night, New Horizon turns into a large light sculpture embedded with thousands of small lights, the surface glows and pulses in response to its surroundings.”

Setting off from Long Point in Martha’s Vineyard, New Horizon is one continuous, flowing event that will be presented at six additional locations including DeCordova Sculpture Park in Lincoln, the opulent Castle Hill mansion in Ipswich and the Field Farm in Berkshires before culminating at Naumkeag’s historical estate in Stockbridge.

Acting as a mirror in the day and a satellite at night, the work is an insight to Aitken’s career-long preoccupation with the power of experiential art. Working across photography, sculpture, architecture, sound installation and video, Aitken employs a range of different scales and disciplines to push boundaries of what can be made. Known for his high production values, immersive environments and monumental works, Aitken shot to fame with his Electric Earth installation, which earned the International Prize at the 1999 Venice Biennale. Since then, his Sleepwalkers exhibition at MoMA in 2007  saw Aitken project film sequences onto the museum’s walls, while more recently with Desert X (2017), his simulation of desert mirage bewildered and beguiled, with a ranch clad in mirrors that became virtually inseparable from the surrounding Palm Springs desert

Aitken is the fourth artist to be commissioned by The Trustees since launching their Art & the Landscape program in 2016. Originally devised as a means of combining contemporary art with their historic houses, parks, waterfalls and gardens, Aitken joins previous artists including Alicja Kwade, Jeppe Hein and Sam Durant, whose works have helped attract thousands of visitors to these iconic sites.

For more information the the project and the events taking place at each venue click here.