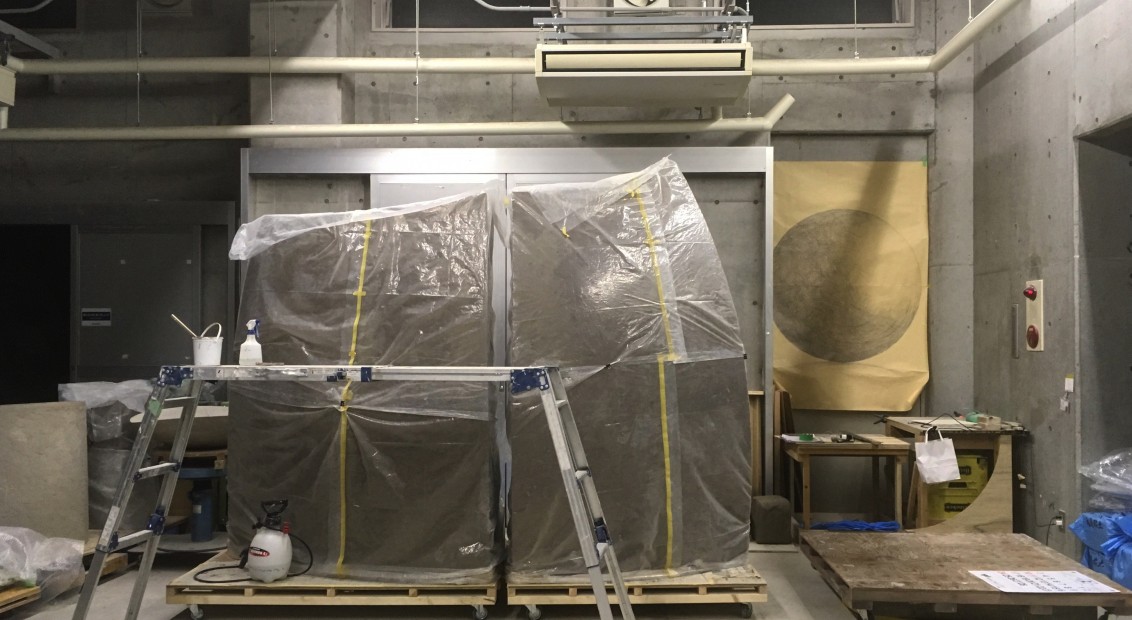 The third edition of Loewe‘s annual Craft Prize is bigger than ever, with almost two and a half thousand submissions whittled down to twenty-nine names. The resulting shortlist is a typically diverse cross-section of nationalities, techniques and materials, incorporating internationally renowned names alongside recently graduated talents from over one hundred countries.

The Prize, which was conceived by creative director Jonathan Anderson in 2016 as a tribute to Loewe’s craft heritage, sees a 44 percent increase in submissions this year as evidence of its increasingly global pull. Despite the majority of entrants hailing from Europe, 2019 sees an increasingly substantial number of entries from Asia and South America, with six out of ten participants being female.

The shortlist was decided by a panel of nine experts who convened in Madrid for two days and selected works based on technical accomplishment, innovation and artistic vision. From the shortlist, a separate jury made up of eleven leading figures from the world of design, architecture, journalism and museum curatorship – including last year’s winner Jennifer Lee – will select the 2019 winner. At stake is a €50,000 prize, with the winner being announced on 25th June at the opening of the Prize’s exhibition, which this year will be held at Isamu Noguchi’s indoor stone garden ‘Heaven’, at the Sogetsu Kaikan in Tokyo. This is the first time the Prize and its accompanying exhibition will be held in the Far East, no doubt evidence of the competition’s burgeoning global prestige.

Ahead of the announcement, we preview six shortlisted participants, who between them represent some of the finest contemporary craft in the world. In their own words Giovanni Corvaja, Henar Iglesias, Kazuhito Takadoi, Harry Morgan, Minhee Kim and Tomonari Hashimoto explain their work alongside studio imagery showing their process. 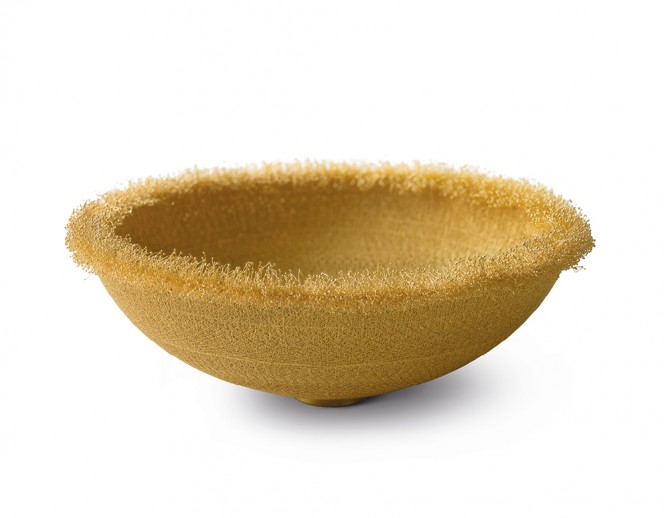 HERO: Can you sum up your work in one sentence?
Giovanni Corvaja: It is an ethereal object made from the densest element of nature, a “basket” without weaving, an object of air created in a vacuum. A piece where details of few microns are made of kilometers long parts. Not a contradiction though: a dialogue.

Can you describe one detail of your work?
GC: The whole object is composed by a criss-cross of gold filament and the empty space between them. Light can pass through it but the structure is rigid. The accuracy and sharpness of the most minute details could be achieved, to my knowledge, only by using a new technique developed especially for the purpose.

Can you describe the process of making it in a short paragraph?
GC: The Mandala bowl Is composed of several kilometers of thin gold wires. After being drawn down to its actual diameter, the gold wire was stretched, to form a geometric structure, on to a circular metal frame with thousand of steel pins: the lines cross each other at various angles according to a geometric and numeric pattern always symmetrical to the centre of the circle (thus the name Mandala). Layers upon layers of the geometric criss-cross patterns were stretched on the frame. 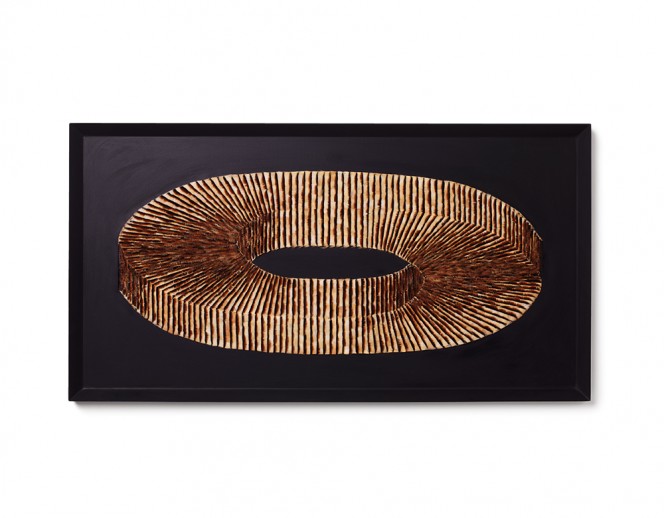 HERO: Can you sum up your work in one sentence?
Henar Iglesias: Feathered confusion of Moebius.

Can you describe one detail of your work?
HI: The size of this work is absolutely conditioned by the pattern of the feathers.

Can you describe the process of making it in a short paragraph?
HI: First remove the down of each feather, prepare the frame and fixed the paper on the wood. Then select the feathers according to their size and the direction of the pattern. I define the beginning and the end of the drawing and the way to work on this project has prevented me from using a template. I will fix the feathers to the paper melting the wax on the basis of each one of them. This is a variation of the pre-Columbian mosaic technique. 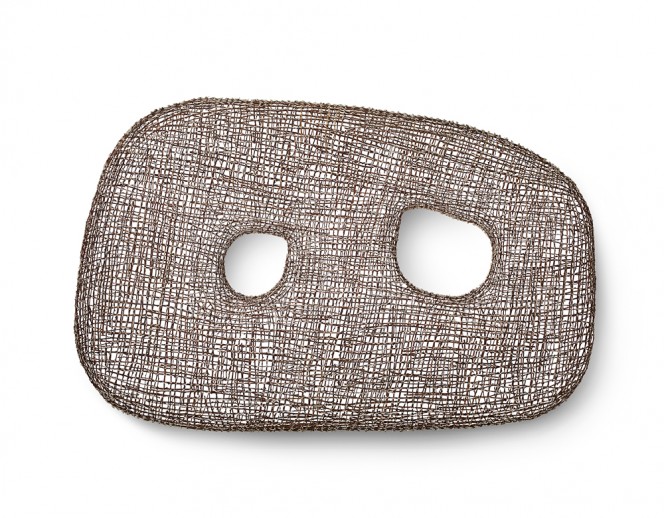 HERO: Can you sum up your work in one sentence?
Kazuhito Takadoi: My work is a collaboration with nature. I take materials that Nature offers and with them I try to convey aspects or moments of it.

Can you describe one detail of your work?
KT: One detail that gives this work its name is the angle in the larger aperture. Our eyes naturally follow circles and curves. By placing the angle deliberately there, it causes the eyes to stop and take notice. My works are organic and with curved forms as most things in nature. This piece is the first one that I have made that includes an angular or straight form, almost unnatural or forced, provoking a subtle tension and shift in the perception.

Can you describe the process of making it in a short paragraph?
KT: I collect hawthorn twigs, clean them, remove all the thorns and leave them to dry naturally for a least a year. Only then I am ready to start the work. Although I have a form in mind I have to remain flexible as the material will dictate how tight the curves can be. It is then a slow process of tying thousands of small knots to hold the structure in place. The work is about time, time to collect the twigs, clean, dry them and then shape them together with innumerable knots, the result of a serene and quiet process. 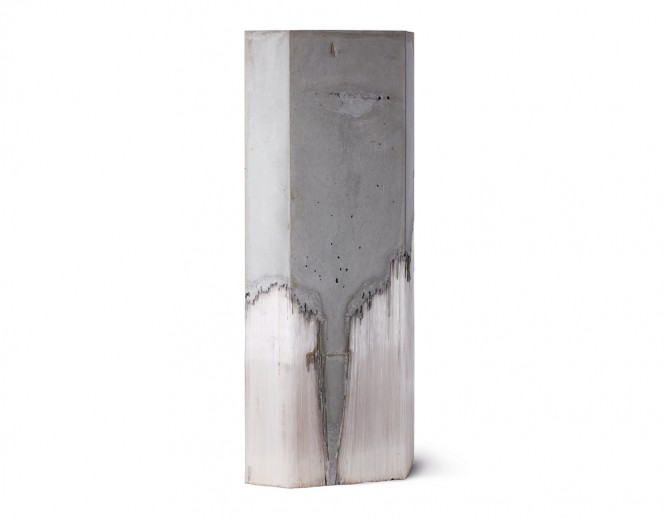 HERO: Can you sum up your work in one sentence?
Harry Morgan: Reimagining the ancient craft of glassblowing through the unusual marrying of materials.

Can you describe one detail of your work?
HM: The interaction between the materials is unpredictable and dictates the character of the objects. The intersection captures a moment, celebrating the roles of accident and control.

Can you describe the process of making it in a short paragraph?
HM: The threads are individually pulled from the furnace. A mould is made with wood, silicone or refractory material, and the glass threads are arranged into a sequential structure within it. Either metal or concrete is poured into the mould and onto the glass, which binds them together as one object. The objects are then removed, acid etched and polished.

HERO: Can you sum up your work in one sentence?
Minhee Kim: ‘Funeral Clothes for Women’ conveys layers of memories and narratives, describing the lives of ‘Comfort Women’ – sexual slaves during World War II for Japanese military service – through traditional Korean funeral clothes.

Can you describe one detail of your work?
MK: While I was working on this topic ‘comfort women’, I was inspired by a Korean story which explained that if children prepare parent’s funeral clothes, their parents live longer. Now there are a few survivors left and they are almost in their nineties, but they are still protesting and campaigning against this hidden and distorted history. As prayer and in support of them, I constructed my work for their longer lives.

Can you describe the process of making it in a short paragraph?
MK: First of all, I needed fabric to make a funeral garment and was exploring various materials. I found monofilament which looks like old lady’s hair and I thought this material could be a metaphor for the whole life journey of the ‘comfort women’ as human hair contains every record of a person. So I stitched monofilament and made a fabric, I then constructed this garment piece. This is a quite long journey that I have to make, forming a garment from only a strand of monofilament. 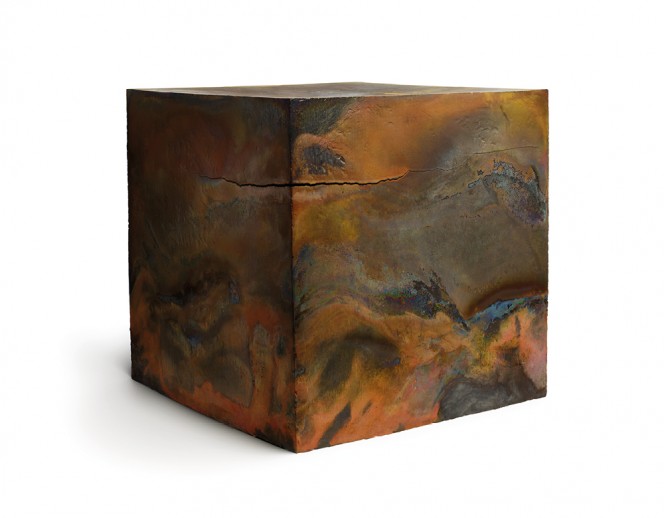 Can you sum up your work in one sentence?
Tomonari Hashimoto: I seek the intangible, but something, like an energy or presence, that surely exist to our human consciousness.

Can you describe one detail of your work?
TH: My work consists of the very simple act of building clay and firing it. Although the surface has a metal-like texture, cracks, shapes and surface textures are the expression in ceramic. Asking about the existence and essence of things through works.

Can you describe the process of making it in a short paragraph?
TH: All my works are made by hand. The work is built through accumulation of clay and never carved away. It is fired with a glaze saturated with metal oxides, then again fired and carbonised to bring out the character of the metals onto the surface. I have to build a kiln-specific to each of my work every time I fire to carbonise them. The work is carbonised by rice husk. The temperature of glaze firing is around 1050℃ and carbonised firing is around 500℃.

The winner of Loewe’s 2019 Craft Prize will be announced on 25th June.
The announcement followed by the exhibition of the finalists’ works – 26th June – 22nd July – at Isamu Noguchi’s indoor stone garden ‘Heaven’ inside the Sogetsu Kaikan building.