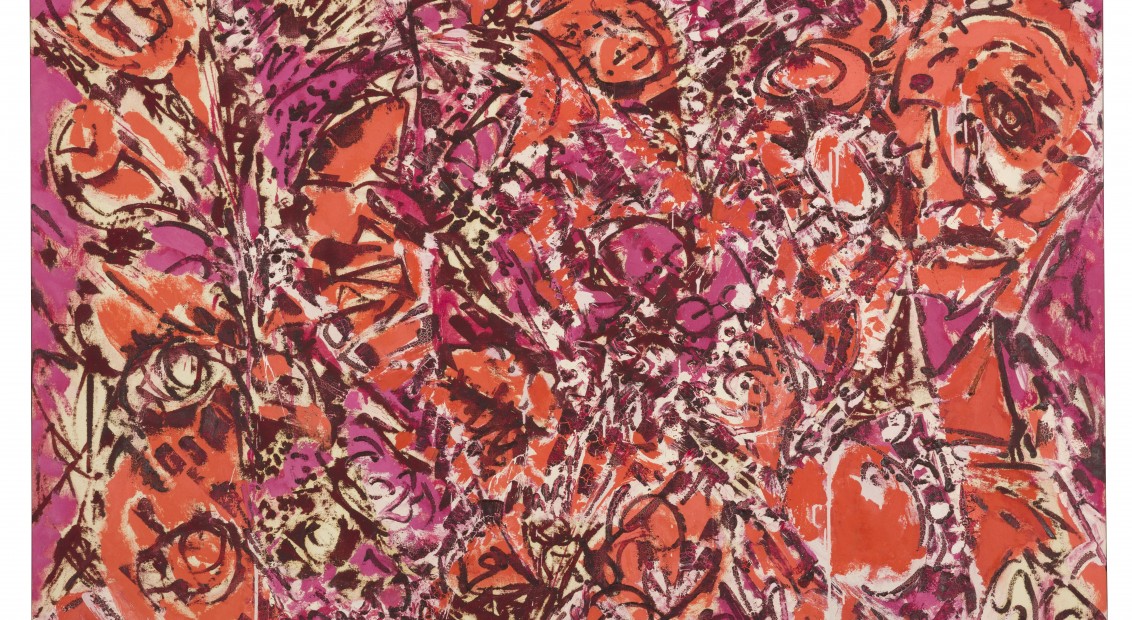 Today marks the opening of American artist Lee Krasner’s first European retrospective for over fifty years. Living Colour is held at the Barbican, where just last year a survey of avant-garde artist couples from the past fifty years illuminated artistic inspiration that can be traced back through life-long marriages and clandestine affairs.

Had they been included in the show, Krasner’s fiercely loyal and immensely productive relationship with husband Jackson Pollock would have demonstrated that mutual artistic inspiration rarely yields a mutually beneficial outcome. This exhibition, which features nearly 100 works, many of which have never been seen in this country before, tells the story of a woman artist, born to immigrant parents and wife of a globally revered artist, whose talent was largely ignored for the duration of her life. 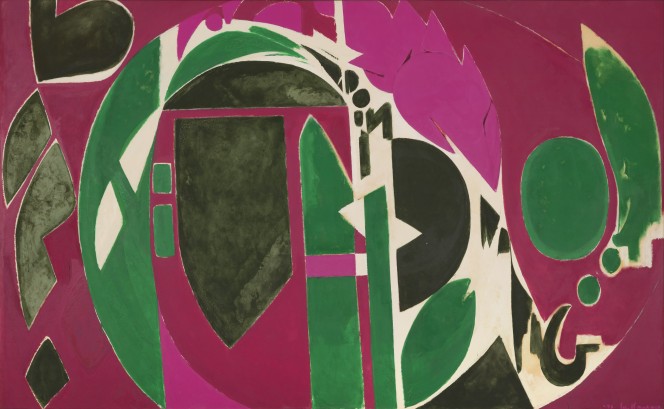 Only one painting of Krasner’s exists in a public UK collection (Gothic Landscape, owned by Tate) and as one of the key artists of America’s Abstract Expressionism movement, it’s small wonder why Krasner’s work has taken so long to return to these shores (her last UK exhibition was a retrospective held at Whitechapel Gallery in 1965). Considering the extent to which her talent was obscured by Pollock during her lifetime however, enjoying only a handful of solo shows and selling very little, perhaps it’s not altogether surprising.

Born in Brooklyn in 1908 to Russian-Jewish immigrants who had fled Europe to escape persecution, Krasner attended Washington Irving High School before enrolling at the National Academy of Design. Originally named Lena, she soon adopted Lenore as a means of distancing herself from her Jewish heritage, finally settling on the more gender-neutral Lee in the 1930s. 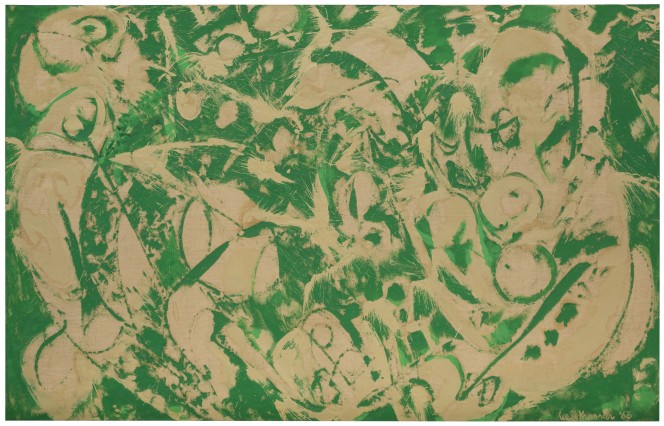 During the Second World War, Krasner, who was commissioned by the Public Works of Art Project to produce art across the country and supervise the production of twenty shop window displays in New York to promote the war effort and advertise training courses. It was here she met Jackson Pollock, who alongside Willem de Kooning and William Baziotes, assisted Krasner in realising her vision. The resulting displays – collaged masterpieces whose typography echoed the seminal design idiom of Bauhaus – will be projected in the exhibition to their original scale.

It was only once the war had ended in 1945, that Krasner and Pollock married before moving from New York to the remote village of Springs on Long Island. With barely enough money to heat their converted farmhouse (now a museum, open to the public), the pair painted voraciously, Pollock in the barn and Krasner in the bedroom. It was here that Krasner began to produce her series, Little Images, fantastically vibrant canvases with thickly layered paint that resemble the entropy of Pollock’s drip paintings. A number of these works, including Shattered Color (1947), Untitled (1948) and Shellflower (1947), greet visitors at the entrance to the exhibition. 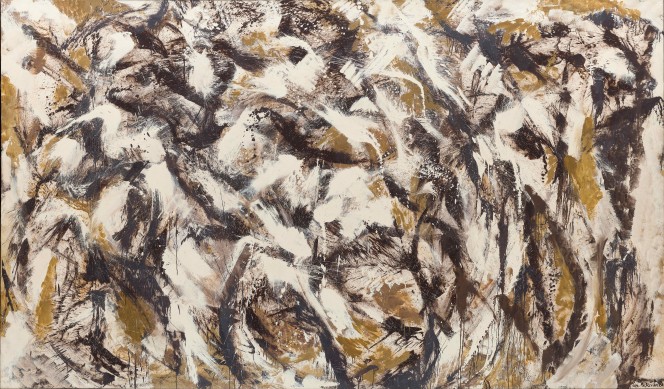 Ten years on from their move to the idyl of Accabonac Creek, and the career trajectories of both artists had taken radically different directions. Pollock, who died in 1956 aged 44 after taking the wheel during one of his habitual drinking sessions, is considered one of America’s most significant contemporary artists while Krasner is largely ignored, only receiving her debut American retrospective at the Museum of Fine Arts, Houston, aged 75.

In life and in death, Krasner defended what she perceived as her husband’s genius. Amid heavy drinking, self-destructive violence and extra-marital affairs, she cared for him while promoting his work, stubbornly refusing to sell cheap. When her husband signed a contract with the pre-eminent collector Peggy Guggenheim in 1945, securing the majority of his output in return for a $2,000 down-payment on the house in Springs, Krasner vehemently defended Pollock in the ensuing legal dispute over paintings that Guggenheim alleged were produced in the same year as the loan.

“Painting is not separate from life. It is one. It is like asking – do I want to live? My answer is yes – and I paint”

Following Pollock’s death, Krasner was, for the first time, afforded the literal and metaphorical space she had for so long been denied. Not only did she move into the studio barn previously occupied by Pollock in Springs (“there was no point in letting it stand empty”, remarked Krasner with characteristic pragmatism), she was able to work on a scale never previously explored.

Tacking swathes of canvas directly onto the wall, Krasner produced an explosive series of paintings in black and umber, many of which feature in the exhibition (including Triple Goddess and Assault on the Solar Plexus). The poet and friend of Krasner’s Richard Howard described them as her ‘Night Journeys’, owing to the fact Krasner was suffering from chronic insomnia at the time (following the death of Pollock and her mother) and refused to paint colour when working at night under artificial light.

The early 1960s saw Krasner re-introduce colour to her work with a confidence and freedom that alluded to her hero Matisse. The tactile nature of her Primary Series, which includes a number of Krasner’s most well-known works, resulted from breaking her right arm and teaching herself to work with just her left by squirting paint directly from the tube onto canvas and using the fingertips of her right hand to guide the lines. In large scale works like Another Storm (1963), Icarus (1964) and Combat (1965 – a 4m canvas unlikely to ever leave its home in Melbourne), the fluid and spontaneous approach that Krasner favoured (she never made preparatory sketches) is perfectly preserved.

Though she did not live to see her own retrospective, Krasner acknowledged the lack of critical acclaim that followed her late husband had in some senses been a blessing, freeing her from the restrictions of dealers and collectors to pursue exactly what she wanted to paint. Ducking beneath the glaring spotlights that were trained on Pollock, Krasner never stopped innovating or pushing the boundaries of her work. As she once famously remarked, “I painted before Pollock, during Pollock, after Pollock”.

Lee Krasner: Living Colour is on at the Barbican from 30th May to 1st September 2019. Book tickets here.