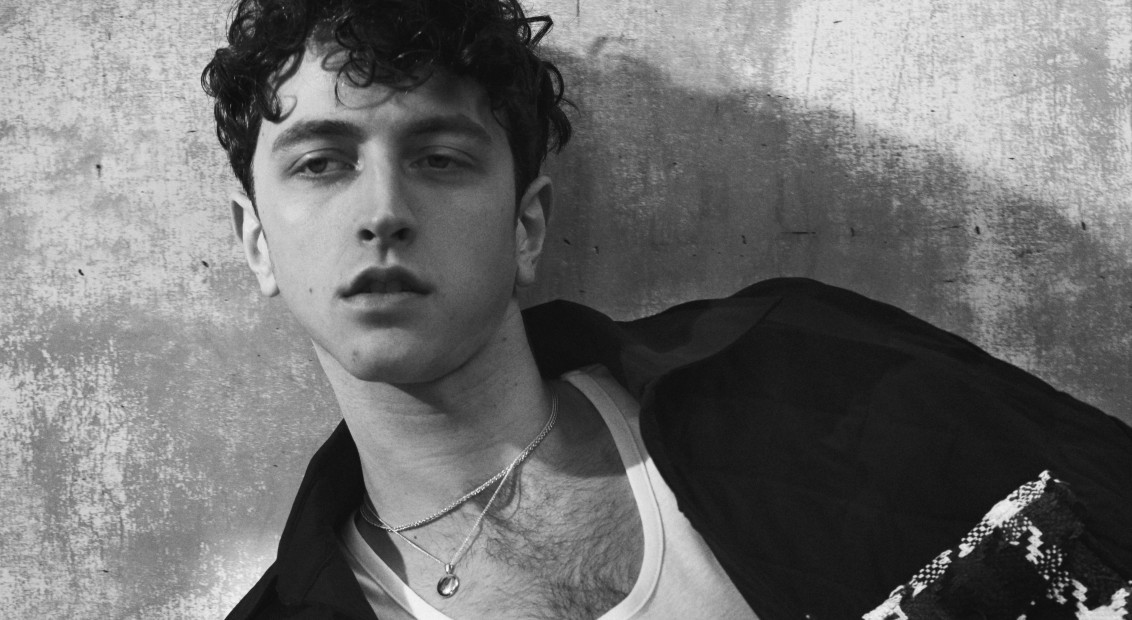 Monse on Monse: the NYC design duo talk us through their debut unisex line

Since day one, slicing apart rigid men’s tailoring and applying its design codes to womenswear has been New York brand Monse’s raison d’etre. After four years of honing this craft, SS19 saw the design duo – Laura Kim and Fernando Garcia – flip their thinking and apply this binary-blurring formula to a series of unisex pieces worn by male models.

Here, Monse’s vision on genderless dress played out via a nautical reference board and cool neutrality to sartorial convention, reworking garments to throw them subtly off balance. Tops twisted gently around the body, extra-long sleeves engulfed limbs, collegiate jerseys skewed with off-centre collars and asymmetrical shirting that could fall off the body at any moment. Where the designers previously described their muse as a “busy woman”, now their appeal extends across a more inclusive spectrum. 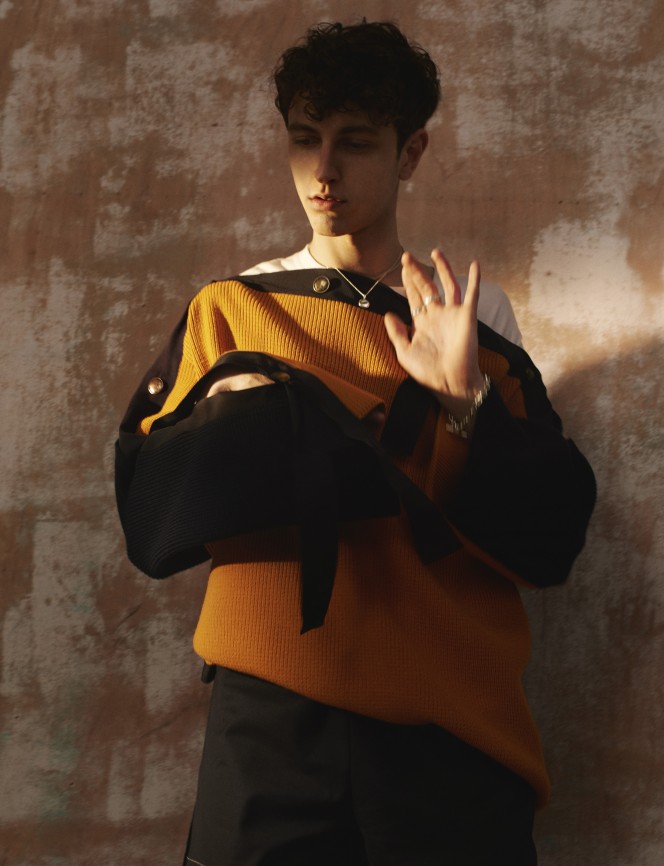 Stevie Cannell: Your SS19 collection was heavily inspired by nautical themes like ropes and decorative netting, was there a particular reason behind this?
Fernando Garcia: We never approach a collection based on a trend, we approach each garment individually. We had picked out separate types of print, many of which had a nautical undertone to them, and as the collection progressed through the summer, we ended up succeeding with the more nautical-themed pieces of clothing that we were creating. So on the runway, it ended up looking like we only had yachts on our minds, but that was just a coincidence. This may be a new twist on a garment we’ve deconstructed, or an off-the-shoulder shirt. It just so happened that this time round, everything that we put on the runway that was successful design wise featured an ivory, nautical undercurrent. That’s usually because we like pieces that are contrasting and graphic, and this came through in the SS19 collection’s colour combination.

SC: Does that mean when you set out designing a collection, you don’t start with a mood board or vocabulary per se – it’s more of an organic process?
FG: Our design processes at Oscar de la Renta [Fernando and Laura are co-creative directors at the brand] and Monse are completely different. At Monse, our team is about, “What can this varsity jacket that we’ve been looking at for a couple years do for us this time? How can we make it interesting for a client who wants something during springtime? What has been a t-shirt that we want to wear, or that we want to see our friends wear?” We pose questions about how we can rethink a particular garment, so having a print that encompasses the whole collection helps steer the way. When the collection is a little smaller, we get to really curate what the message is in each piece.

SC: It allows you to really hone in.
FG: Exactly. We really want to continue designing in the same way we started – by deconstructing men’s shirts. At that time we were designing shirt dresses for day and night, but they felt a little stale. So we approached it by questioning how we could go about making it feel fresh. How could we go about deconstructing a garment which felt passé? Now more people are doing this, so it’s about taking another garment and applying the same ethos. 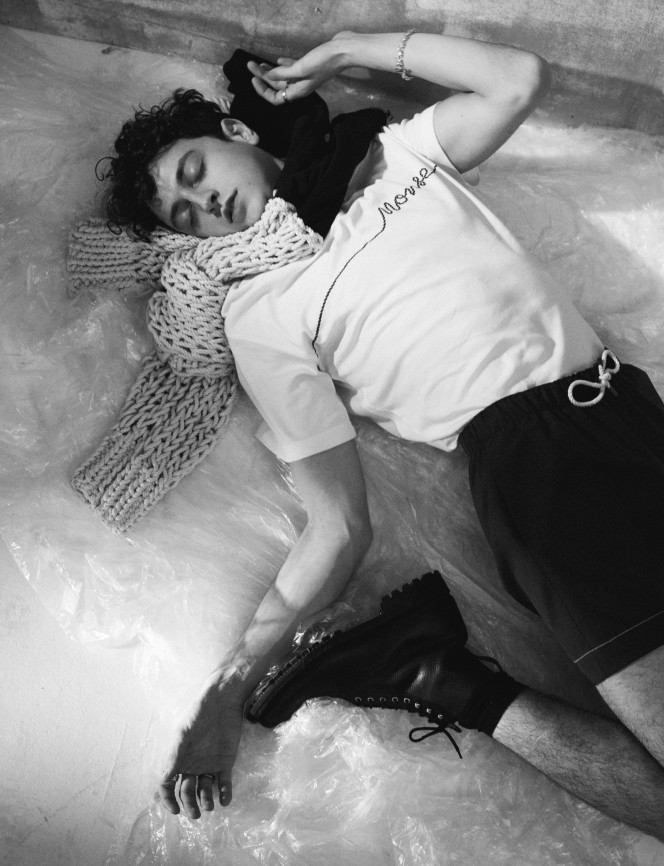 SC: Was the move into unisex always on the cards? What made now the right time?
FG: It’s funny, we had a natural progression of male buyers who were gravitating towards some of our oversized pieces season after season. They would come in to try pieces on and we started to see that, because we initially developed the garment from a menswear point of view, pieces didn’t look bad on a man. We originally thought about having three guys walk some of our unisex pieces – which is what we call them because they really are for both sexes – but as guys started coming in [to store] more and more, we started to create additional pieces and it just became our first unisex collection: whatever was worn by a man could be worn by both a guy and a girl.

SC: It’s a nod towards the growing versatility of gender?
FG: I think it’s just a natural progression of the Monse DNA. It was not a political statement of any kind, instead it was more about saying, “You know what, we’ve been doing this for a couple of years – womenswear as inspired by men’s – so let’s give it a shot.” We’re growing with our fan base in that sense, the two ideas overlap.

SC: You ran the unisex collection alongside the womenswear line, so I expect there’s some kind of integral connection there. It’s one cohesive line?
FG: Yes, I definitely see it as a cohesive line. We’re doing the same thing that we were previously doing for women, so there are no men’s markets that we’re consciously tackling. Instead, we’re approaching it completely as a unisex collection. We started off with the perspective of taking your boyfriend’s outfits, putting it on you, and making it look sexy. So we believe in that, we believe in a duality in every woman. She has a masculine side and she has a feminine side, and she shouldn’t have to exclude one or the other – she should be represented in what she wears.

SC: That idea of taking ‘stale’ concepts of garments and transforming them must help keep things fresh.
FG: Absolutely. Take the t-shirt, for example, it’s our job to rework it to make it sexy, blousy, fitted, unfitted… and the menswear world in general has so much to dive into that hasn’t been done yet. It’s like a never-ending pool of inspiration. As designers, we have to be out there. If you stay in a bubble you’re not aware of what is going on outside and therefore you’re not responding to what people need. So at the moment, in this climate, this is what feels relevant in the market because it’s not saturated. In five years, maybe Monse will be doing something else, who knows? My point is, designers need to be able to pay attention to what’s around them, and make clothes that aren’t already out there.

All clothing by MONSE SS19.