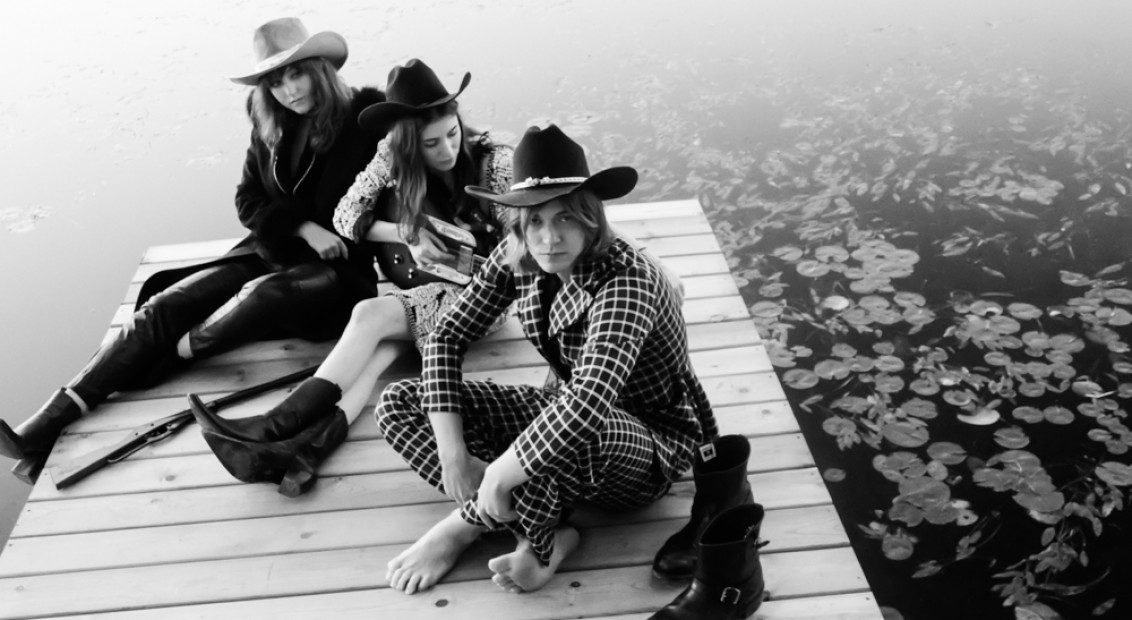 The Moonwalks are filling Detroit’s vacant streets with cosmic psych

As Detroit rebuilds after filing for bankruptcy in 2013, former warehouses and factories sit empty. Inside these husks of industry, a new generation have claimed them as their own DIY creative spaces. It’s here, across newly occupied venues that bands like The Moonwalks are able to shape a new city soundscape – and now the streets reverberate to a new pulse.

Far removed from the monotonous clunk of Motor City machinery, The Moonwalks create the sort of cosmic, kool-aid sound that Jodorowsky would happily sink into. A whirling, psychedelic mix, there’s method in the maelstrom: living on Detroit’s sparsely populated streets – “You may drive for fifteen minutes before seeing anyone else” – the stars appear closer and noise emanates further, with time to reverberate, swell and transform.

It’s this amorphous quality that has formed the lynchpin of the band’s music so far, however, one EP and two records deep, the band’s upcoming work sees them crank the handbrake on their maxed-out approach for a sparser, more restricted 180° turn. 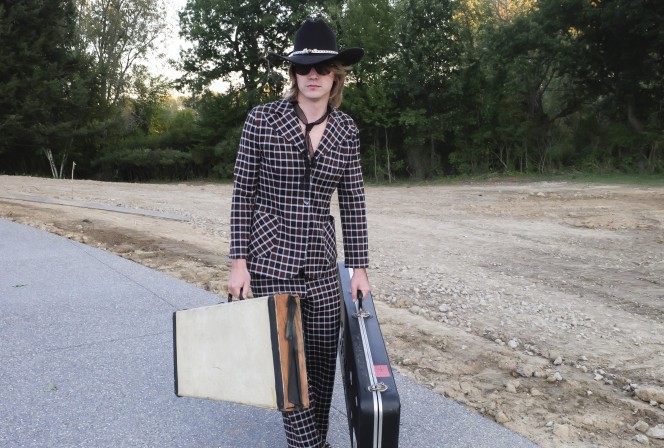 Alex James Taylor: You all live together in Detroit?
Jacob Dean: Yeah, we all share a house together.
Kate Gutwald: We’ve been here for about six months.

AJT: Is there still a big DIY music scene there? I know a lot of the abandoned warehouses and factories were being reappropriated as rehearsal spaces and gig venues.
KG: We used to play a lot of DIY shows in old warehouses and abandoned buildings, but that scene is beginning to slow down a bit now.
Kerrigan Pearce: A lot of new venues are opening up now and people are moving in. Jacob: There’s more money than there has been in a long time – outside money. People are coming in, opening businesses and buying property. It’s different, but there is a lot of good music coming out of here…
Kate: Especially right now. Jacob: I think that’s kind of the story with all of America currently, it’s a pretty weird time and that’s leading to a lot of interesting music. I think there’s just mass confusion at the moment.

AJT: Detroit must still be a bit of a ghost town at times though.
Jacob: Oh yeah, it’s crazy.
Kerrigan: It pretty much is a ghost town. It’s not like any other city, there are no people walking around, nobody walks anywhere, you have to drive everywhere.
JD: In the winter when it’s cold, I’ll start my car and drive and it’ll be like fifteen minutes until I see another person. Just all these empty blocks and abandoned houses.

AJT: It’s funny because your sound is very voluminous and textured – built on reverb and echo – it almost mirrors the sparsity of Detroit, but also the large, empty warehouses you’ve played in. There’s that idea of needing to fill a space.
JD: Totally, but also filling the space in your head with music. There’s something about that idea of creating a sound that totally absorbs the space it exists in. There’s a huge difference between Detroit in the day and at night.

AJT: In what way?
JD: In terms of volume, it’s pretty quiet in the day. At night we can really make some noise, so the bands here are very loud.

AJT: That’s a trait that carries through the likes of MC5, Iggy and The White Stripes.
JD: Absolutely, MC5 were the loudest band in the world. Maybe it comes from the factory noise that used to fill the city. KP: Yeah, also it’s very hard to break out of this city. It’s very easy for artists and musicians to get stuck in Detroit and not branch out and make it anywhere else. So I think a lot of people – maybe subconsciously, maybe not – just play hard and loud as a sort of intense outburst.

AJT: So in terms of The Moonwalks, did you get together in 2015?
KG: I think so, sometime around then.
JD: That ’s when we started releasing music, but we went to school together so have known each other forever.

AJT: What made you form a band?
JD: We were all always thinking about music, so it was just a matter of time before our similar tastes melded and we started making music together. It was all kind of by chance.

AJT: Listening to your debut EP, you’d pretty much nailed your sound already. It’s accomplished and fresh.
JD: Sure, I think as far as style goes we’ve remained fairly consistent. But I feel like we’re a completely different band now from even a couple of years ago. We’re all the same at heart but we’ve been through some shit [laughs]. We can think as a band a lot better now, we’re more in sync and aren’t as reliant on formula.

AJT: I guess when you play together for so long you begin to be able to stray from particular formulas and explore different routes.
JD: Yeah, it’s like telepathy now.

AJT: How do you tend to write songs, is it a joint effort?
KG: We write the songs together, we have all the time in the world in this house.

AJT: I imagine you having instruments and bits of lyrics everywhere?
JD: I have one in my lap right now [laughs].

AJT: Do you record at home too then?
KP: We don’t really own any equipment but we borrow stuff from friends a lot, so we record when we can.
JD: There’s enough musical equipment in Detroit for us to scrape things together when we want, but we’re trying to go into the studio now to lay down something worthwhile, rather than do a half job here.

AJT: We did a whole issue on Detroit a few years back and it was really interesting to hear how all the creative scenes were working together to create through collaboration.
KG: Yeah, I used to play in Growwing Pains, so we were in the issue. They aren’t a band anymore, but it’s a small world [laughs]. 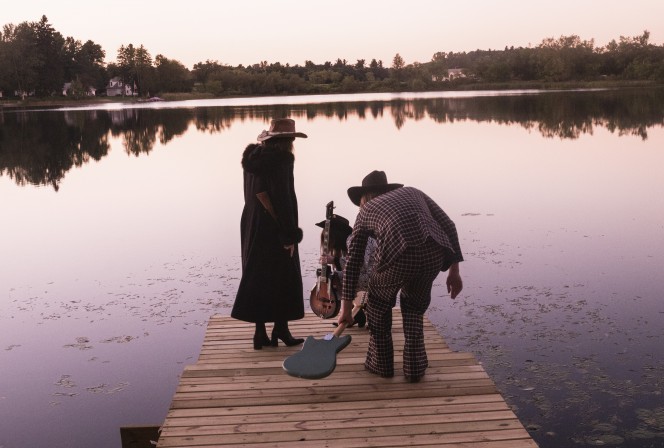 AJT: When we spoke to people for that issue, many mentioned that gentrification had started in the city and there was a debate between wanting money to come back into Detroit yet also wanting the city to remain authentic. A lot of people seemed worried about the negative effects of gentrification.
KP: It’s changed a lot. When I go around the city now it looks like a different place.
JD: But it’s not something to worry about too much as it’s going to happen whether you like it or not, it’s part of the process.
KG: It’s good and bad, you can’t really have more money and opportunities coming in without having some of the negative points as well. Jacob: You see it though, you see the money when you go downtown.

AJT: I guess the worry is that it’ll just start to look like every other city. Have they reopened the Michigan Central Station yet? They’ve been working on that for a while.
KP: No, they’re slowly doing it.
KG: Someone just bought it, the whole area is going to be so different. It was abandoned around there for like 30 or 40 years. 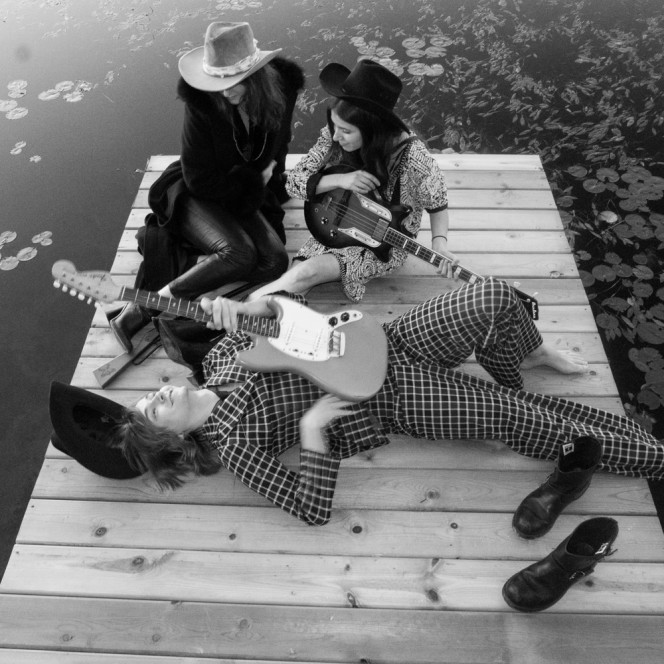 AJT: You’re called The Moonwalks and your music has a very psychedelic, sci-fi sound to it – do you have an interest in astronomy and cosmology?
JD: Yeah definitely. I think that’s a common trait everyone in the world shares, we’ve all looked up into space and wondered what’s out there. I think it’s a good thing to have as a musician because it’s like a universal language. No matter where you are in the world, you’re looking up at the same sky – it puts things into perspective.

AJT: What else inspired your last record?
JD: The last record was all about spaghetti westerns and in particular the scores by Ennio Morricone.
KP: We love those films and the atmosphere the music and settings create.
JD: Also weird psychedelic biker movies from the late 60s, like Easy Rider and stuff like that. Those always have the best soundtracks.

AJT: All Dennis Hopper films have amazing soundtracks. Have you seen, The Last Movie, starring Peter Fonda and Kris Kristofferson? Apparently during production it was just a mad drug binge and they all went a bit mental. You can see that in the film [laughs]. Your music would fit perfectly in that bizarre desert-scape.
JD: Yeah [laughs], Dennis Hopper is great.
KG: We’re actually heading out into Texas to SXSW in March, really looking forward to that.
JD: We went last year and it was wild, it’ll be good to go somewhere warm. We want to go somewhere hot to record too – we’ll hopefully have a new record released this year.

AJT: What’s the feel of your new material?
JD: It’s pretty much a departure from our last record, it’s a lot more sparse. It just went that way, our live set changed and we started writing all these songs for our last tour in Europe just with three instruments.

AJT: Did those restrictions help you to think more creatively?
JD: Yeah, especially with the live set.
KP: It kind of makes you think more about what you’re doing.
JD: And it leaves a lot of possibilities open for when it’s cut. But emptiness is always a special thing in music, sometimes it helps to pause for thought.

Tagged with: The Moonwalks Read more about: Detroit Show me more: Music