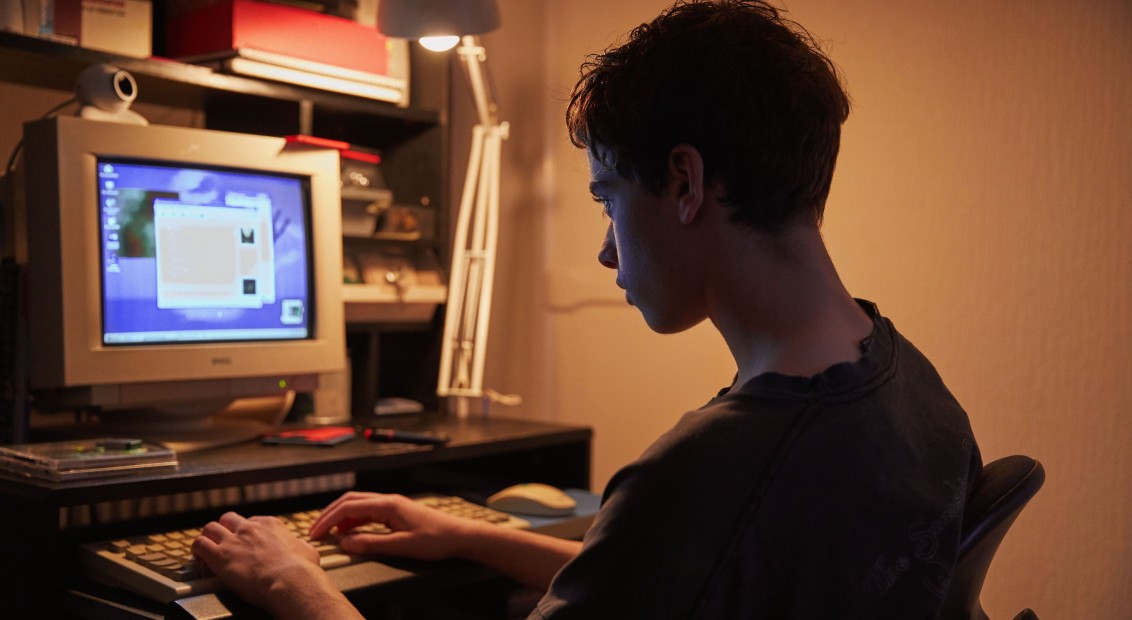 Filmmaker Jason Bradbury is reminding us how important MSN Messenger was

The internet is turning 30 this month, a sobering, middle-age-affirming milestone for most, but for the BBC and BFI, an opportunity to detail how this epoch-defining technology has shaped the generations born under its inescapable sovereignty. Across 11 short film commissions, Born Digital explores how the internet’s arrival catalysed an unprecedented set of formative experiences for a guinea pig generation of youngsters, from MSN messenger to the unmistakable outer-space static of its early dial-up service. Now adults, they are reflecting on the effects of a digitised age that was thrust upon them.

My Sweet Prince is one of the commissioned films, written and directed by London-based filmmaker Jason Bradbury (We Once Were Tide), and set for broadcast on BBC4 (details below) following its premiere at the BFI Southbank. The 12-minute short sees segments from Bradbury’s own teenage VHS diaries, shot during childhood summers at home on the Isle of Wight, spliced with the fictional story of Tommy, a young boy wrestling with doubt and uncertainty who finds solace in the virtual company of his online ‘prince’.

My Sweet Prince | Trailer from Jason Bradbury on Vimeo.

In smoke-filled basements lit only by the flicker of a screen and the occasional orange glow of a spliff, Tommy sits detached from his friends, paralysed by the fear of his sexuality. Fearing the attraction he feels towards his male friends, he chooses to forgo physical company and instead seeks out anonymised friendships online, carefully muffling the dial-up sound of the router for midnight chat sessions with his MSN pen pal and confidant. Featuring music by Placebo, specialists in eyeliner, teen angst anthems and nineties nostalgia porn, the film is a tightly woven record of an unmistakable time, stood at the precipice of an unknown entity.

Speaking in the director’s notes, Bradbury said, “The internet had a huge and lasting impact on me. It allowed me to seek out a community and offer a safe space for me to explore my sexuality. Throughout the making of the film I had to wrestle with the warping of memory. This idea of confronting my past is what the archive and fiction juxtaposition represents. In a way, the fictional story of Tommy better resembles my experience as a gay teenager on the Isle of Wight than the footage captured on the VHS tapes.”

“I remember my youth as oppressive, lonely even – but after digging out the tapes that document my youth, they are filled with fun, laughter and friends. I knew everyone. However, life wasn’t easy; I was bullied, I felt the lack of role models in the media, but perhaps the biggest enemy in my youth was myself. Not being able to admit to myself who I was, kept everyone else around me at a distance as well. This is something that I feel almost anyone can connect with.”

Below, we speak to Bradbury on the importance of online communities among disaffected and marginalised youth, why cyber relationships are as valid as any other and the advice he’d give to his teen self. 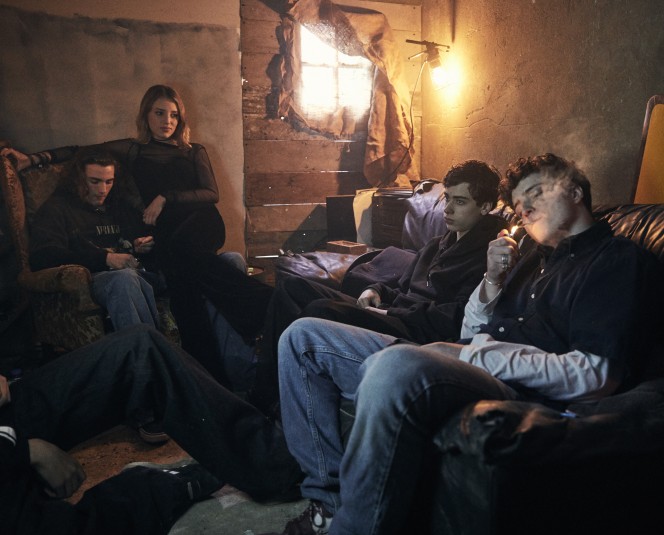 Finn Blythe: Why do you feel this film was important to make?
Jason Bradbury: Making My Sweet Prince was important to me because I felt that formative LGBTIQ+ experiences from the early 2000’s and the impact the internet had on that, are curiously absent in film. I think there’s a tendency as filmmakers to steer clear of showing screens on screen, there is an inherent lack of drama when you present interactions this way – however so much of my youth was spent doing exactly that. In fact, like Tommy, some of the most important emotional turning points of my teenage years were experienced on MSN Messenger! When I heard about the Born Digital project, I thought it would be the perfect opportunity to tell this story.

On a personal level, My Sweet Prince has been a journey of self-discovery too. I ran away from my childhood and teen years, but I never really questioned why. What was it that made me want to escape so much? Whilst things were tough, I was also very lucky. I had a lot of amazing, accepting friends and a very supportive family. It was still difficult to be a teenager questioning your sexuality around that time, especially somewhere fairly conservative like the Isle of Wight. There wasn’t much awareness or positive role models in the media, and I wanted to make a film that showed how the internet began to change that.

FB: How might your childhood have differed had the internet not been around?
JB: This is actually a scenario I’ve played through in my mind many times whilst making My Sweet Prince – what would a gay teen Placebo fan from the Isle of Wight do without the internet?! Although I did talk to friends about my sexuality, I think it was the internet that truly showed me there were others like out there.

When you see your straight friends dating each other and able to express their intimacy openly, it’s tough. You want that too. There’s a lot of references to these feelings in My Sweet Prince, some beautiful and intimate moments between my friends captured on the home movies. It was the internet that provided the space for me to do that. To find other boys to fall in love with and for the feeling to be reciprocated. It felt real. It was real. Without that I think I would have felt even more isolated. 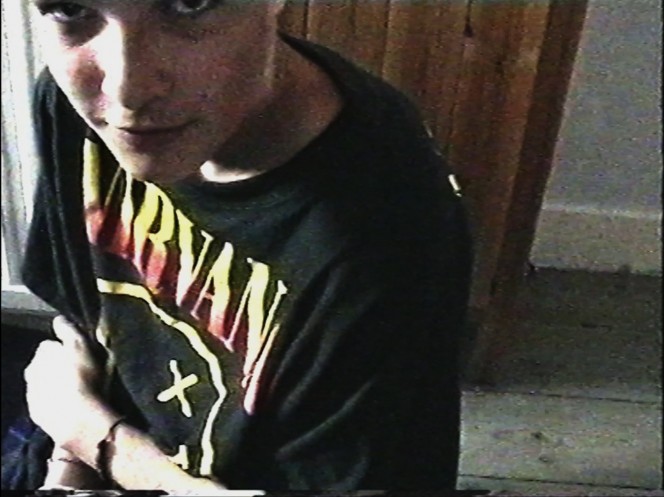 FB: How did the arrival of the internet reconfigure our perception of loneliness?
JB: For me, the arrival of the internet sparked a great sense of connection with the outside world. At the click of a button I could escape the confides of the tiny island I lived on and go anywhere, chat to anyone. Fall in love with a boy from Vienna. Become obsessed with an androgynous boy from Brighton. I sometimes wonder if my generation had it best, that we had the benefits of the offline and online world. Both were very different spaces, and you gave yourself fully to each.

Right now I think the feeling of loneliness that some people are experiencing from the internet is the result of being expected to be in both worlds simultaneously. As a society we haven’t figured out how to do that. I don’t doubt that a balance can be struck, I believe in the positive potential of the internet, but it’s a difficult time. We’re kind of at the point where we need to define what our relationship to the internet is, and whether it’s going to work alongside the offline world or replace it.

One of the beautiful and most surprising things about the reception of My Sweet Prince so far has been the amount of people of all sexualities and backgrounds who say the film depicts their exact experience growing up too. It sounds lame but I do genuinely think we’re all more alike that we care to admit.

“We’re kind of at the point where we need to define what our relationship to the internet is, and whether it’s going to work alongside the offline world or replace it.”

FB: How do you think the internet paradigm has shifted for kids growing up today?
JB: I’m always torn here – I often wonder whether the shift towards constant and pervasive connectivity is really beneficial, or whether it’s actually isolating us and driving us further apart. It’s a big conversation. I do question who this narrative is being shaped by though. Who are we talking about when we say that the internet is causing damage? A middle class white family who can’t put their phones down at dinner? Look a little further and I think you’ll still find marginalised kids for whom the internet is a liberating and vital part of existence. These kids are maybe using the internet in the exact same way I did when I was a teenager, as a literal lifeline to connect to others in an otherwise very lonely world.

That’s what I wanted to say with My Sweet Prince, that there is positivity in the connections we make online. That those connections are real, and valid. I absolutely think we need to question things, the internet is not the innocent place it once was with almost every interaction being commercialised, but maybe that doesn’t need to be the case, but we first need to remember that it wasn’t always that way.

FB: What advice would you give to your teen self now?
JB: I’d say look after those VHS tapes you’re shooting as you’ll need them for a film in fifteen years time! On a serious note, I think as LGBTIQ+ people, and even outsiders in a more general sense, we tend to compartmentalise our lives. Escape, run away and not really deal with the trauma of our experiences. I think that’s a shame as you risk also shutting out all the positive too. I’d say the answer isn’t running away, face up to your feelings even if at times that’s the hardest thing to do.

Born Digital: First Cuts was commissioned in partnership between BBC Arts and the BFI for BBC Four to mark the 30th anniversary of the World Wide Web. A series of programmes will explore the many facets of an invention that completely changed the world as we know it. Sunday 17 th March, 10pm on BBC Four and BBC iPlayer