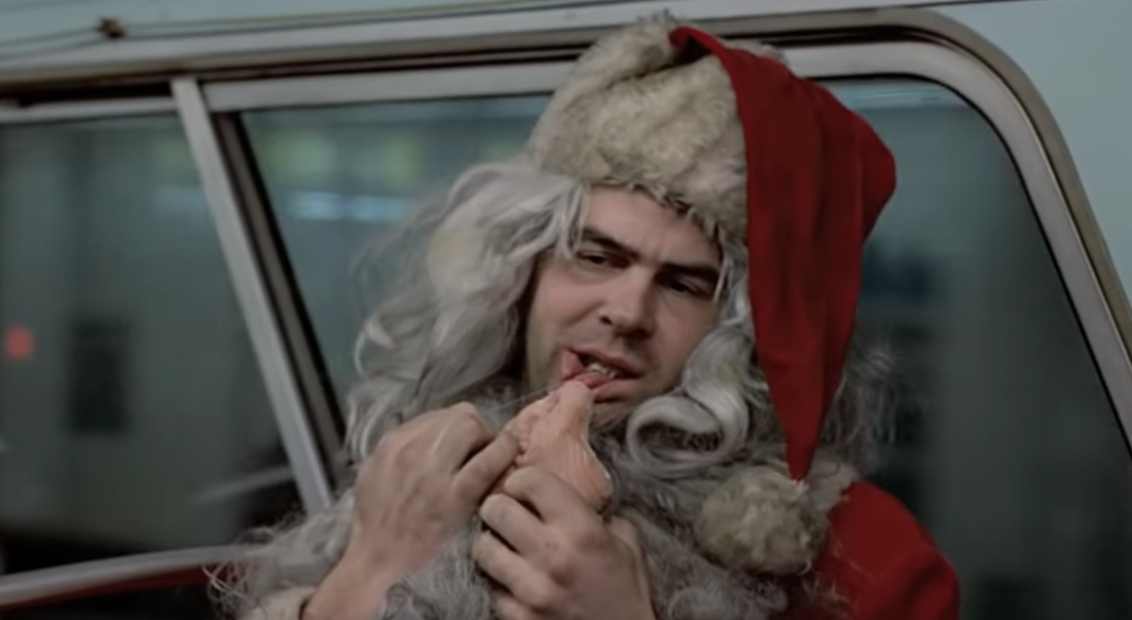 Not quite feeling it? Here’s your alternative HERO Christmas screening guide

Like everything else at this time of year, choice of Christmas film is subject to all the same rites, rituals and traditions that, for many of you, will feel set in stone. Do you Love, Actually? Or do you prefer to Die Hard? Is it A Wonderful Life? Or all about being Home Alone? These are among the most important questions in the run up to the big day, right up there with present opening protocol and choice of desert. Done correctly, the Christmas film can unlock all the right juices and set the holiday mood off right. Anything else, and it can leave you agonisingly short on the required vibes until Christmas Day slips past like any other. This year, we suggest freeing yourselves from the shackles of traditions and taking a left turn with your choice of film.

Find below a refreshed and revitalised take on ye old favourites, a departure from the familiar and well-worn that will set this Christmas apart from any other. From classic wintry tales to overlooked festive feel-gooders and just some really excellent films from this year, all are certain to get you in the mood come the 25th.

Pour yourself an unreasonably large glass, dim the lights and wriggle under an appropriately thick rug for 193 minutes of epic wintery wonder. This is, in no small terms, a certified piece of cinematic history, a five-time Oscar winning masterpiece made for long evenings spent in horizontal hibernation. Set in Russia, from the onset of the First World War through to the late 1940’s, it follows the tragic love story of  Yuri Zhivago (Omar Sharif) and childhood friend Lara (Julie Christie) as they fight for a life together against all the odds. Getting in the way of it all: a communist revolution, a World War, and a bitter Russian winter.

Few of Europe’s cities scream winter wonderland like the medieval Flemish centre of Bruges, the Venice of the North, and the perfect place for a pair of fugitive Irish hitmen to keep a low profile. In what is by no means intended as a film to imbibe the festive spirit, Martin McDonagh’s brilliant screenplay (for which he received an Oscar nomination) still manages to do just that, and no, not just because of the dwarf. The black comedy that we have come to expect from McDonagh is no better exhibited than in the endearingly diametric relationship of Ray (Collin Farrell) and his mentor, Ken (Brian Gleeson). Their somewhat contrasting perspectives on life, death and the city of Bruges itself (“If I grew up on a farm and was retarded Bruges might impress me, but I didn’t, so it doesn’t”) leads to countless moments of highly quotable hilarity.

This Christmas, take solace in the fact that no matter how indulgent your celebrations may seem or how bitterly your waistband complains, you will never be as full as Dawn French in her VoD Christmas Special. A sybarite in a dog collar, Geraldine Granger is on vicar duty in Dibley, where her burgeoning popularity amongst the local pastorate brings her Christmas lunch invitations from half the village. Naturally, she is too polite to decline any and, for fear of causing offence, refuses to leave a morsel behind, displaying the kind of stoicism that quite literally, brings her to her knees and (eventually) all fours. She even accepts a sprout eating challenge and a plate full of tripe. Yum!

With each passing day the acclaim surrounding Alfonso Cuarón’s semi-autobiographical film grows louder, meaning by the time you get round to watching it over the holidays (released on Netflix, 14 December) it will have reached a deafening crescendo. Set in Mexico City during the early 1970s, what this film lacks in festive tropes and white wonderlands it certainly compensates for in performance and plot – the Academy Award nomination (among others) is testament of that. Shot in black and white, this tale of family drama in the residential district of Mexico’s capital known as Colonia Roma is essentially centred on two women, Cleo (Yalitza Aparicio) and her employer Sofía (Marina De Tavira). Expect comedy, absurdity and no small means of tragedy in this late contender for best film of 2018.

Commonly regarded as the runt of Kubrick’s litter, the final cut of what would be his last film was submitted to Warner Bros just four days before he died. Runt it certainly is not. Eyes Wide Shut bears all the hallmarks of visionary genius that characterise Kubrick’s better known films, a work that, to this day, probes insecurities regarding marriage, fidelity and sex. In Japan, where the film was a huge commercial success (and public physical contact is generally frowned upon) it’s effects on viewers was so profound that, according to it’s producer Jan Harlan, “couples were leaving the cinema holding hands”. Few films have so pervasively marked out their territory in the collective imaginations of all those who have watched it, setting a precedent for the masked sex cult that would be imitated by many but mastered by none. While almost every scene and location exudes the hazy glow of Christmas lights, there is virtually nothing in the way of festive cheer (sorry), suggesting that Kubrick intended to not only demonstrate the vacuous commercialism of Christmas but the disparity between fantasy and reality that is echoed in the relationship of his two protagonists.

The pitfalls of the office Christmas party are laid bare like never before in this rom-com of the ages. Loaning your apartment as a hook-up spot for fellow colleagues to conduct extramarital liaisons is generally an ill-advised path to promotion but then again, few could have anticipated it to all go as pear shaped as it does for Bud (Jack Lemmon). While his stock has never been higher in the eyes of his bosses, Bud is hopelessly at a loss when it comes to his love interest and elevator operator, Fran Kubelik (Shirley MacLaine). Having previously fawned over the opportunity to lend his apartment to his licentious boss (who also has his eye on Kubelik), Bud must now take a stand against his own servile flattery to fight for the woman he loves.

Following his Oscar winning triumph with Ida in 2014, few could have foreseen Pawlikowski reaching similarly vertiginous peaks so soon after. Many would argue that Cold War goes further still – a story based loosely on that of Pawlikowski’s parents as they chase their forbidden love across the ruins of post-war Europe, behind the iron-curtain and the ever-watchful eye of the Communist party. Few films are able to demand your attention from opening shot until last but this is certainly one of them, ninety minutes worth of exquisitely crafted cinema in which no shot is wasted, no scene overplayed or line superfluously spoken. There’s an economy to Pawlikowski’s camera work (aided by cinematographer and frequent collaborator Lucasz Zal) that results in a lean, perfectly measured story with a score to match. Where other films might use an entire scene for exposition, Pawlikoski does so in a single shot, trusting the audience to keep pace.

It’s the run up to Christmas in some idyllic, nameless Middle-American suburb. Snow lies thick, Elvis’ crooning carols and a Christmas parade is underway. Bringing this heart-warming scene to a resolute and shattering end is a car crash in which main character Samantha Caine (Geena Davis), who already has a bad case of amnesia, suffers concussion and taps into a forgotten former life as Charlene Elizabeth “Charly” Baltimore, a deadly CIA assassin complete with platinum bob. Possessing skills and strength she had no prior knowledge of, she embarks on a mission of self-discovery with low-life private detector Mitch Henessey (Samuel L. Jackson) to uncover her forgotten past. Before long she finds herself at the centre of a CIA bomb-plot and a history full of unsavoury characters on a mission to silence her for good. Needless to say, she makes it home for Christmas.

Or perhaps you’re in the mood to get a bit more weird this Christmas? Cue Jim Henson’s bizarre, mythical world of Labyrinth. Featuring bad babysitters, talking door knockers, a grumpy goblin junk lady, Sir Didymus the dandy fox terrier, the fairy tale fantasy sees a pubescent Jennifer Connelly negotiate the myriad dangers of a mazy goblin city and cross the Bog of Eternal Stench to reclaim her baby brother from the talons of Goblin King Bowie – complete with magic ball and majestic bulge. Scripted by Monty Python’s Terry Jones, Labyrinth is often pitched as a children’s classic, but it really does get even weirder and more sinister as you grow older.

Nothing says Christmas like a bunch of geriatric, conniving businessmen, right? Bored of making millions, one Christmas the morally bankrupt Duke brothers decide to debate the age-old nature vs. nurture debate with a one-dollar bet: a contemporary retelling of The Prince and the Pauper tale, they reverse the lifestyles of impoverished street hustler Billy Ray Valentine (Eddie Murphy) and aristocratic yuppie Louis Winthorpe III (Dan Aykroyd). Resulting in hilarious results, John Landis’ Trading Places is an absolute Christmas classic – and a biting jab at the fiscal doings under Reaganite capitalism that haven’t eased in 2018.