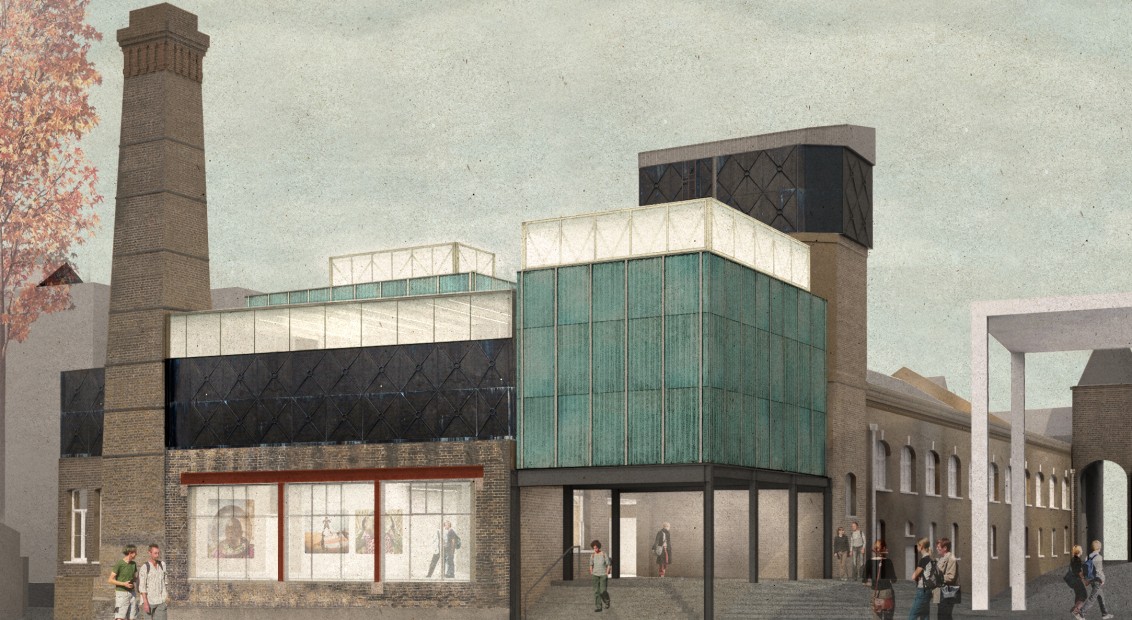 Since their debut project eight years ago, a petrol station on Clerkenwell Road re-purposed as a DIY cinema, Assemble have established themselves at the vanguard of a new kind of architecture. At its heart, their work relinquishes the idea that a building should reflect the sole authorship of a single architect or vision, but should instead remain malleable and responsive to community, context, sustainability and social history. It’s an approach that characterises their ethos, informing individual projects and their egalitarian structure, in which a project is never run by a sole architect and individual credits are forgone in favour of collective recognition.

Through community engagement and an emphasis on the hand-made, their work shifts the focus from the individual to the collective, becoming initiators of events that extend far beyond their own involvement. Their remarkable Turner Prize success for instance (Assemble were the first architects to ever win the prize), was grounded in the idea of community-led regeneration in one of Liverpool’s most deprived areas. With the help of Assemble, streets of dilapidated terraced housing were reclaimed and transformed into locally run craft businesses as a means of organically sustaining the revival of a community.

Their latest project at Goldsmiths Centre for Contemporary Art (CCA), doesn’t share the same overt community involvement, but as their first permanent structure it offers a cross section of the collective’s visionary repertoire and a glimpse of what could be achieved on a larger scale. Formerly Laurie Groves Baths, built in response to London’s 19th century hygiene epidemic, the site has always held a public value and its social legacy is reinstated by a design that continually emphasises the idiosyncrasies of the building’s original structure. Like so many of their projects, it’s a space that invites playful interpretation and alternative configuration, intended to challenge artists and provoke stimulation rather than adhere to the conventional concept of four white walls. The porosity of the building offers new opportunity, hulking Victorian infrastructure is fused with tactile hand finishes and a variation of proportions, light levels and materials not only demonstrate the multi-disciplinary skillset of the collective, but offer a potential blueprint for subsequent projects of this scale.

Adam Willis, one of the collective’s founding members, walks us through the new gallery, from the raw and unfinished feel of the basement, to the double-height central space, through galleries bathed in light and up to the cast iron tanks swathed in darkness. 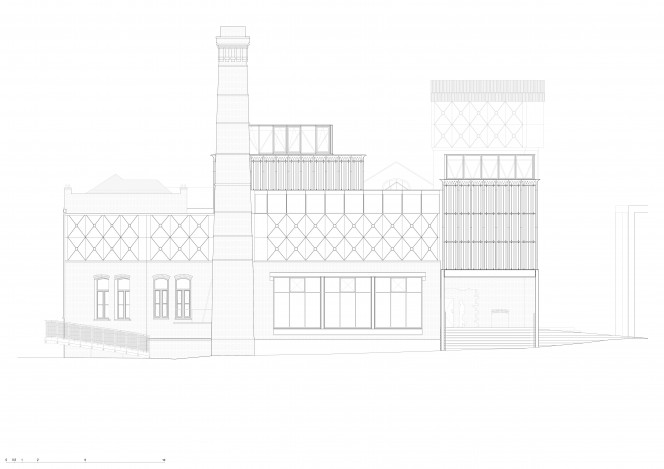 Finn Blythe: This is your first permanent structure, how did you modify your approach?
Adam Wallis: As well as being the first permanent structure it’s also just a massive leap up in scale and complexity. Perhaps our naivety at competition stage led us to propose such an extensive project, we didn’t hold back and I think that’s made it an exciting building in the end. It has been a very complex thing to realise – there’s so many different conditions of old meeting new and structural gymnastics and all these things that perhaps, if it hadn’t been our first big opportunity, we would have been a bit more restrained. But I suppose we were always keen to find opportunities to continue the ethos and way of working that we had in previous projects, so that’s where things like doing the facade package came in. We knew we couldn’t build the whole gallery but we wanted to identify moments where we could still be quite playful and experimental and be hands on with materials and techniques, so facade packages were quite a major thing.

FB: Did you consult anybody on designing a gallery space? Because it has to fulfil a very particular kind of criteria.
AW: Well obviously there’s a lot of expertise within Goldsmiths – Richard Noble, this was kind of his baby, and Andrew Renton who’s part of the curating department was very heavily involved. Ultimately I think it kind of comes down to the vision of the person that’s going to be directing it, because an art gallery can obviously be so many things and until Sarah came on board, which was sort of half way through the process, the building was already on site by then, it was still fairly up for grabs in a way. The brief was quite loose in the first instance because there was no director on board, which makes it interesting because we’ve probably ended up with a gallery that’s quite a challenging space to use. It offers a lot of variety and potential I think, whereas if you’d adhered to a very pre-prescribed brief: we want this kind of gallery that’s this size, this kind of environmental –

“The brief was quite loose in the first instance…which makes it interesting because we’ve probably ended up with a gallery that’s quite a challenging space to use.”

FB: As you say, this project represents a considerable step in terms of scale and size. Do you have an idea of how Assemble will apply their ethos to larger projects? Is that an ambition of Assemble, to reconcile moving into the mainstream without surrendering what makes you so unique?
AW:  Yeah, it’s a good question and it’s something we’re continually struggling with and discussing. We have a summit every year and that’s really the kind of thing that we talk about; do we want to grow? What kind of project do we want to concentrate on? Do we want to maintain a variety of projects? How can different people pursue their individual interests but still maintain and be part of the company that offers stability? Finding a balance between those things is really the hardest thing in a way, the project of Assemble is going to be the longest term challenge, definitely. But I think there’s a broad consensus amongst the group that we would like to get involved in more bigger scale projects that have a significant public impact and benefit, but also maintain the opportunity for people to pursue more focused research-based activities. So for example, two people at the moment are making a Radio 4 documentary about craft, somebody’s just been doing their PhD and that’s kind of been linked in to Assemble. That’s really important I think, for us as a group that we can retain that diversity. So it probably doesn’t answer your question at all [laughs]. 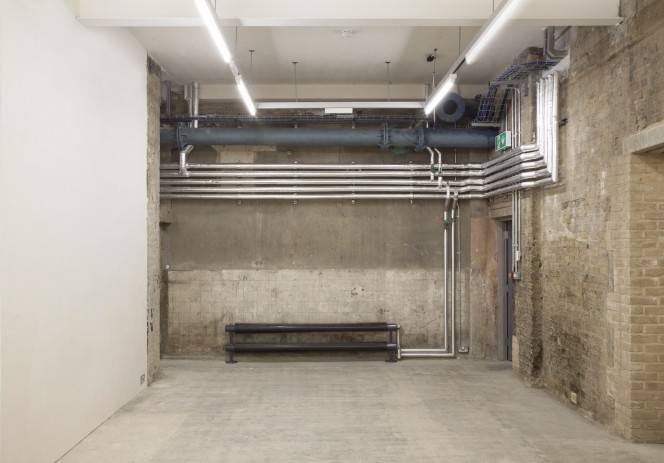 FB: It’s a hard question. Just having grown up in London it’s so depressing to witness the number of glass and steel high-rises that go up and as someone that loves this city, I just really want Assemble to be more in the conversation of how we’re going to shape the city and there’s something about what you do that just seems objectively good.
AW: No I think it’s true. You could just say, right we’re ignoring that scale of stuff, it happens but we can’t do anything about it, we’re going to concentrate on making these nice tile projects. But really we should and we will hopefully, try and get involved at that scale. Whether that’s collaborating with other practices who have a ready-made infrastructure for dealing with projects of that scale, because obviously we’re quite small and a long way off being able to do a project that size, that’s probably the way forward I think, close collaborations with other practices.

“The cladding is very cheap but sort of tweaked and there are smaller moments of hand-crafted elements – that is a kind of language I think.”

FB: It’s interesting that you mention one of your colleagues was doing this programme on craft, I mean you’ve referenced William Morris through your A Factory As It Should Be project in Brooklyn, but William Morris’ dilemma and that of the Arts and Crafts movement was that ultimately something that is produced by hand does then cost money. So you have my sympathy for not having a very obvious answer for that question.
AW:  No, but I’m quite interested in this idea of hybridisation, and I think this building does it on a very small scale. Broadly speaking, it uses very standard construction techniques and materials. Using steel frames for the new volumes for instance, is the standard way of constructing buildings in the UK, it’s what builders know how to do. The cladding is very cheap but sort of tweaked and there are smaller moments of hand-crafted elements – that is a kind of language I think. As you say, this idea of craft running through a whole building is far too expensive and it’s not really possible in today’s economy. But it’s also something that Granby workshop are looking at – Granby Workshop started off with everything being very hand-made and using extremely low tech processes, but it became evident that you can’t really sustain a viable business like that so we’ve had to hybridise the production methods. Now we have an industrial pneumatic press for these tiles, but that’s combined with a hand-mixing of different coloured clays so you get variety of the hand-made but with the potential output of mass produced. So I think that cross over, at all scales, is something we’ll probably be pursuing.

FB: And do you have an idea of what would be a dream project for you?
AW: For me and a lot of people for Assemble housing, doing some good, affordable housing is probably the hardest challenge in UK architecture but also the most important to address. It’s what good architects in the UK should be contributing to.