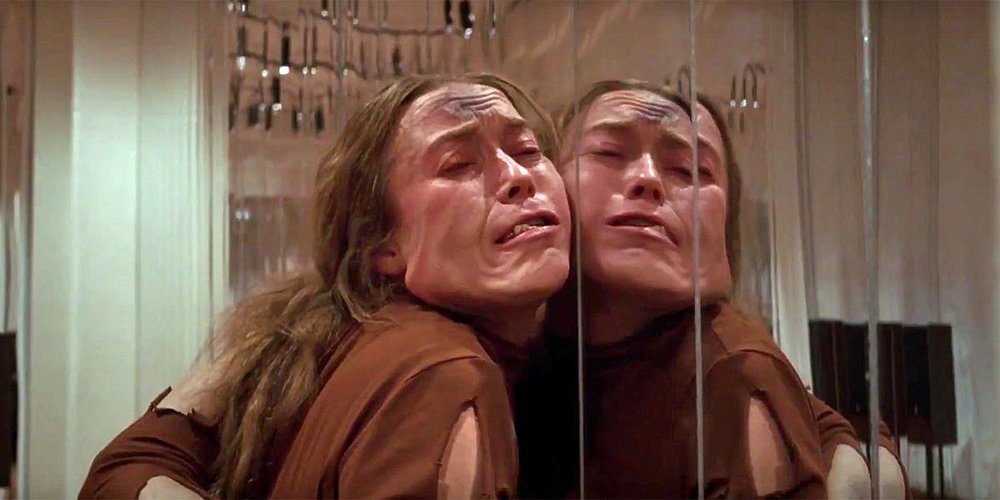 No toil, no trouble

No toil, no trouble

Lose yourself to dance
It’s Hallowe’en, we know. So when it comes to our film recommendation, it’s all about the frighteners this weekend. Well, one in particular TBH: Luca Guadagnino’s remake of Dario Argento’s 1977 classic Suspiria.

Following Susie Bannion (Dakota Johnson), a naive dancer from Ohio who joins a dance troupe in West Berlin run by the austere Madame Blanc, we quickly discover that this ain’t your standard dance school, in fact, it turns out that it’s actually a coven of witches. As the film begins to twist, jut and spiral, we soon get sucked into the sinister mechanics of the troupe. Glee this is not. And featuring an original score by Thom Yorke, the film also boasts the perfect Hallowe’en soundtrack if you want your party to be more eerie than cheery.

We’ve been waiting on this one for a while and it’s sure to deliver.

Suspiria is out now.

Punk unplugged
If the pretence of cheap wigs, plastic teeth and sexy kitten ears just aren’t doing it for you this weekend, London musician Meggie Brown is taking things down a notch and pulling out the acoustic guitar for an unplugged session at Lion Coffee + Records.

A usual Meggie Brown gig is an impromptu, raucous event, so this is a rare chance to see her pair things down for an intimate evening – but none the less riveting. Plus, it’s free. So what’s your excuse?

FYI, GIG REMINDER: Jarvis Cocker (or Jarv Is…) will be playing a special immersive Hallowe’en show at EartH in Hackney on 31st October, while Pam Hogg is hosting a spirited night at Stoke Newington’s Old Church alongside Thurston Moore, Sunn O)))’s Stephen O’Malley and Necrobutcher (of The True Mayhem). Either one is a guaranteed night to remember, but for bonus points, why not hit up both. Fill your boots. Or underwear.

Jarv Is… plays at EartH on 31st October. Tickets are currently sold out, so use your initiative.

A potent mix
Take a breather from all that horror by stepping into the serene space that is London’s TJ Boulting, where the gallery has pulled together some of the more exciting women artists for its new In The Company Of exhibition. Drawing works from three historic female artists – Barbara Hepworth, Lee Miller and Alice Neel – alongside twelve nascent, working names including Juno Calypso, Maisie Cousins, and Juliana Cerqueira, there’s plenty to get your teeth stuck into here (no Hallowe’en pun intended – but welcomed all the same).

A witch’s guide to life
If your idea of Hallowe’en involves really getting your hands stuck into the occult, here’s one for you courtesy of Sabat magazine, the publication shifting the occult into the contemporary world via witchcraft, feminism, ancient archetypes.

Sabat editor Elisabeth Krohn will be calling on all surrounding spirits for a special intro to modern witchcraft, where guests will be schooled in modern practices, helping them to channel powers and practice potent self-care. Plus, you’ll also have the opportunity to create your own ritual tools. Consider this the first step on your path to witchhood. Dress in Saint Laurent SS13 for ultimate witchy vibes.

Sabat’s Intro to Modern Witchcraft takes place on Monday 29th October at The Hoxton Hotel. (We know, we know, the event is actually on Monday, therefore post-weekend. So what, we cheated a little, we make the rules here.)

✨ Join us for a bewitching session focused on potent self-care in collaboration with @thehoxtonhotel in Shoreditch and the magical women behind She's Lost Control​ @slc_london ✨ Book your tickets now, link in bio! Photography by Lolo Bates @lolobates #witchcraft #witch #witchesofinstagram #magic #triplegoddess

Ditch the Pumpkin Spice Lattes and pour yourself a Morgue-A-Rita
Or perhaps you’re looking to raise another kind of spirit this Hallows’ Eve weekend? In which case, dodge the undead and slink into The Elephant’s Head in Clapton for some mean mezcal and whiskey-based cocktails. (Pair it with their moorish scotch eggs for the ultimate combo.)

Step through the velvet curtain into the ye olde worlde bar built from the owner’s collection formed by his side-line in architectural salvage: a door from Clerkenwell Prison, oak from railway carriages and a stained glass window from the Metropolitan Cinema Victoria. Oh, and check out the toilets. We’ll say no more.

Go on a Sunday for one of the best Sunday Roast’s in town.

Is Hackney London’s booziest borough? While the capital has lost nearly 1,200 pubs in 15 years, Hackney has seen an increase in pub openings, including @elephanthackney Come and enjoy the sun with us and try our delicious scotch egg with a crisp cold pint! #hackney #hackneypubs #coldpint #sunsout #eastlondon #britishproduce #sustainability