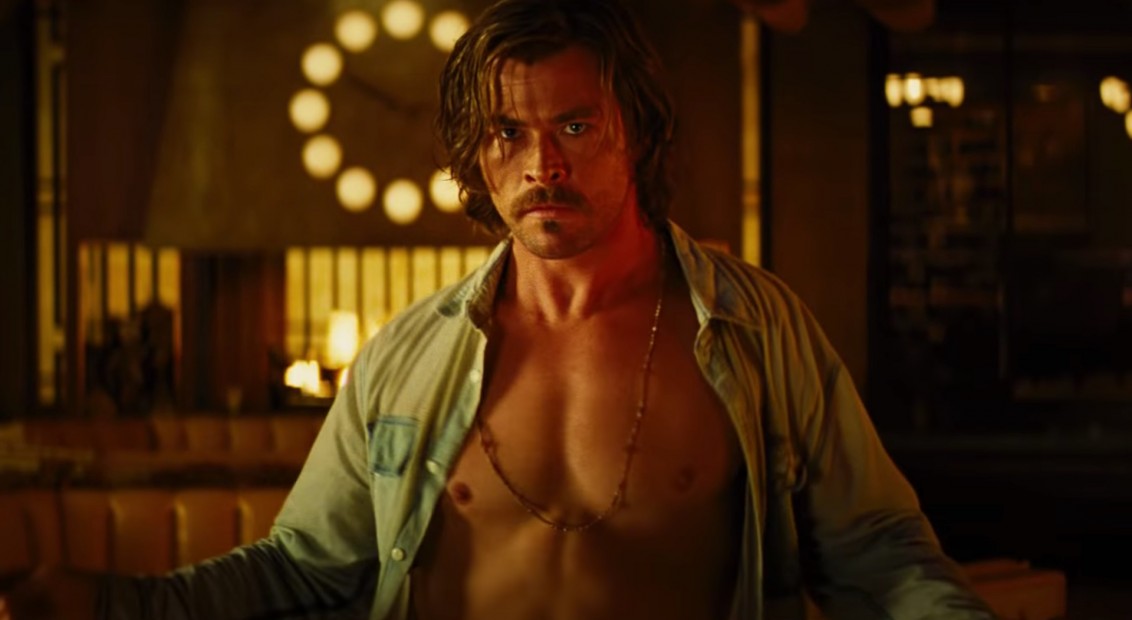 Weekend Combo: A horror hotel, swimming in a gallery and meaty chops

I’ve take a double suite and a whole lotta trouble, please
A priest, a southern vacuum salesman, a femme fatale and a soul singer all check into a sleazy 60s hotel… no it’s not the beginning of a bad joke, it’s the plot-line for The Cabin in the Woods director Drew Goddard’s second feature, Bad Times at the El Royale.

Boasting a killer cast including Jeff Bridges, Jon Hamm, Dakota Johnson, Chris Hemsworth and Cynthia Erivo, the film takes place in 1969, the year that saw the Summer of Love brought to a conclusive end following the twin shock of the Manson murders in August 1969 and the brutal killing by Hells Angels of an audience member at the Rolling Stones concert at Altamont a few months later. Here, that optimism vs pessimism battle of the late-60s American dream is brought to life via neon-lit twists, stellar performances and a 360 neo-noir kick. FFO: Tarantino, Nicholas Wedning Refn and B-movie thrills.

Bad Times at the El Royale is out now.

Stop Stomp Stompin’
What’s a weekend without a bitta full-voltage music to blow away the week’s cobwebs? Our thoughts exactly. Hailing from Atlanta, Georgia, The Coathangers are your new go-to.

Having been releasing music for just over a decade now, the trio have amassed a thrilling body of work that borrows from vintage girl group harmonies and slams them head-first into the power socket. The result? Fully-charged, high-octane garage punk that’ll have you hair standing on end.

Playing at Moth Club this weekend, we recommend seeing them straight after watching Bad Times at the El Royale for a proper noir eve to remember.

Dive right in
Since 1995, Berlin based duo Elmgreen & Dragset have responded to cultural concerns with their customary tongue in cheek approach, highlighting issues of class, gender and race with a foreboding social commentary that spans sculpture and performance.

Their latest exhibition at London’s Whitechapel Gallery sees the Scandivaian duo take on the “intense gentrification” that is endemic of London’s East End. This is How We Bite Our Tongue centres on a transformed Whitechapel space, in which a neglected, disused swimming pool visualises the constricting effects of gentrification on creative development and community resources. At a point when the age of austerity following the 2008 financial crash has supposedly come to an end, the exhibition represents the crumbling legacy of a period in which the fate of public services and civic spaces were neglected in favour of private commercial development.

A post shared by Whitechapel Gallery (@whitechapelgallery) on Oct 1, 2018 at 7:55am PDT

This Is How We Bite Our Tongue is on at Whitechapel Gallery until 13th January 2019.

Speak up
An unusual admission this week, but then, it’s not every week that the fate of the nation for generations to come lies in your hands. This is one such weekend however, with the largest anti-Brexit march yet taking place on Saturday, it’s a vital opportunity to undo some of the madness and lay the foundation for a People’s Vote on any potential Brexit deal.

It is expected that around 100,000 people will take part in the march backed by Sadiq Khan, protesters will begin assembling from midday on Saturday (20th October) on Park Lane in central London. They will then march to Parliament Square where speakers will deliver addresses in support of a People’s Vote from 2pm onwards.

More information on the march route and times can be found here.

Get your chops around this

After all that shouting and marching, you’re going to need some sustenance. Cue Blacklock’s new Shoreditch location, offering up signature chops and and wintery staples such as (prepare to salivate) Yorkshire puddings, 10-hour as roasted sweet potato and beef-dripping chips. Having partnered with New York’s renowned cocktail bar Slowly Shirley, you can wash it all down with a five quid cocktail – the Autumn Negroni is always a winner.

Oh, and did we mention Blackrock’s highly sought-after Sunday Roast? We won’t bother explaining, you’ve got to taste it for yourself. Aunt Bessie’s this is not.