“I’m often asked what’s so special about Stanley Kubrick and my answer would be that it’s what’s so special about any great artist, namely, the work doesn’t disappear”. Of all the people to eulogise over Kubrick’s achievements, few can rival the insight and knowledge of Jan Harlan, who was not only Kubrick’s brother-in-law but worked alongside him for the best part of thirty years as executive producer, eventually directing and producing his 2001 biopic, Stanley Kubrick: A Life In Pictures. In spite of his self-effacing modesty,  (“the term executive producer means absolutely nothing”, according to him) together with Alan Yentob, himself both a long-standing friend and colleague of Kubrick, the two are looking forward to a first ever UK retrospective of the auteur’s work, arriving at London’s Design Museum in April next year.

As Harlan points out, almost twenty years on from his death and final release, Kubrick’s fictitious worlds bear an unerring resemblance to our own – testimony, of course, to the enduring and timeless genius of his works, but also a reminder that this exhibition comes with a sense of urgency. “Paths of Glory is unrivalled, Dr. Strangelove is unfortunately as current as it can be, and then you have 2001 – we’re as ignorant as ever about what is out there”, says Harlan. With our very own deranged General Ripper in the White House, Yentob concedes that,”Even Stanley would be amazed that actually his parody, his satire, wasn’t just true, it was beyond what could be happening.”

Intimately bound up in Kubrick’s extraordinary ability to build and immerse himself in the worlds of his films was his relationship with technology. Through his obsessive commitment to pushing the technical boundaries of cinema with innovative new approaches to film-making, Kubrick’s legacy extends into the world of design. As Yentob recalls, “Stanley couldn’t wait for the digital realm to arrive, he had to invent it… he built this extraordinary construction we called ‘The Monster’ , which was all these VHS machines piled on top of each other connected to a computer, which at the time was the biggest and best you could buy, but which today doesn’t even compare with an iPhone”.

Among the lengthy list of superlatives associated with Kubrick, his support and appreciation of fellow filmmakers is perhaps lesser known, but just as the unwavering power of his work reflects his status as one of the undisputed greats, so too does his adoration of his contemporaries. As Harlan points out, “What I saw in Stanley from the beginning is the respect for others, he didn’t criticise much, but he raved when he saw something else which was great, and I believe this is also the mark of a great artist; Mozart adored Bach, Beethoven adored Mozart, and he adored many filmmakers, from Ingmar Bergman to Edgar Wright and Carlos Saura.” 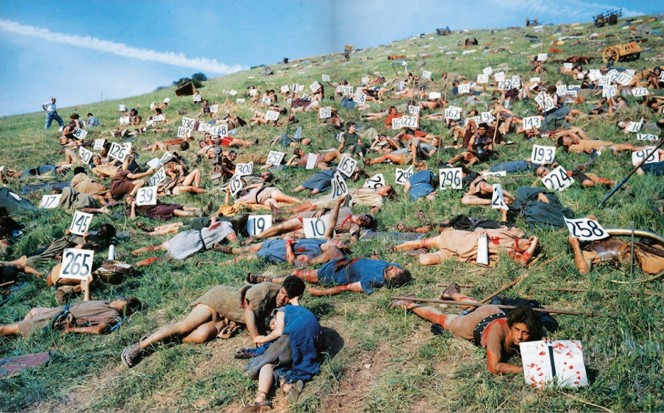 Finn Blythe: I wanted to start by asking you both why you thought now was such a particularly good time for this exhibition to take place?
Alan Yentob: Well partly because it hasn’t taken place and secondly, it is twenty years since Stanley died, it’s fifty years since 2001. Also oddly enough because of what’s happening in America and Strangelove and AI and all the themes that Stanley was engaged with, but also his interest in technology and the way it was going and moving, and how he used it and reinvented it. We’re living too in that world of social media where people read stuff which is complete rubbish and think it’s true anyway, and then they re-digest it. I was with Arthur Miller at one point in New York years ago and somebody came up to him and said, ‘Can I ask a question about Marilyn Monroe? You did such and such and then in nineteen such and such you did this…’ And Arthur went, ‘No’. And he said, ‘Oh yes, you did, I know you did’, and then he started to tell Arthur about himself and his life and Marilyn, as if they knew more about him than he knew about himself. And now we’re living in that world with a vengeance, people think they know who Stanley Kubrick was better than anyone, so that’s when it turns into myth [laughs].

FB: His approach to film making was in one sense quite paradoxical, on the one hand he did insist on complete creative control but then he also welcomed collaboration and consultation.
Jan Harlan: That’s not a contradiction is it? He was always very open to suggestion. I experienced this all myself, I always suggested music, I never chose it – it’s a big difference. He chose what he wanted and I suggested. I mean in early days I gave him cassettes for example, to listen to in the car. I’d number them and then I got a message back, “Number seven looks very interesting, see if you get more along those lines”, and I looked at number seven and it was a Haydn string quartet or whatever, that’s how we worked. But I’m nothing to do with what you see on the screen, zero, only maybe whether you got permission, the rights, how much it costs and stuff like that.
AY: Stanley has the big vision OK, it takes him a long time for him to get to the end of his journey. If the placing of that camera in a critical position – and remember, Stanley understood about photography better than anyone – if it’s critical to his vision of how to see the world, then of course it’s important and anyone working with him really had to accept that. But he was still always asking questions, always interested in how things were done and different peoples’ perspectives. As Jan often says about Stanley, he engaged – and this is very unusual about someone who was so ordered and organised, he immersed himself in chaos, he went in there. This is the world, go and inhabit it, find out everything about it and then sit back and decide what decision you’re going to make and how you’re going to make them. That’s why the editing was so important for him, because in film it’s so critical, the rhythm and pace of things, the use of music.

FB: It necessitates that immersion.
AY: Yes it does, but if in terms of the bigger picture that’s not what he wants, he’s quite right to intervene.

FB: You mentioned it briefly there – Kubrick’s use of music and soundtrack – I’m intrigued to know how you intend to incorporate or emphasise his seminal use of music in the exhibition?
AY: Well the exhibition can’t do everything, but what we’re definitely hoping for is a concert of Stanley’s music, which will be part of this overall thing. The BFI and BBC are involved and we’re going to make sure that is celebrated.
Jan Harlan: If we have room also we usually have a cabin with his music and his samples.
AY: And Jan was very much involved in that because he knows a lot about classical music and, as he says, Stanley chose but he would suggest and of course it’s amazing the use of… placing music them in contexts which no one would expect. The unexpected was what you often got from Stanley and yet it felt true and real and you bought into it, you walked into that world.

FB: Interestingly, many of his most celebrated films were not huge commercial successes, and as two people that knew him very well I was interested to know how that affected him on a personal level and whether it had any impact on his approach to film making?
JH: Well he was a very good trustee, he wanted Warner Brothers to get their money back, that was his main concern. He didn’t live a lifestyle that cost a lot of money. He really was very unhappy when a film stayed in a loss position, like with Barry Lyndon, he didn’t like that. Now, on the other hand you have to see the whole package, A Clockwork Orange was hugely successful. I spoke to Terry Semel, (former Warner Brothers boss) and he said, “If you make film with a guy like Stanley Kubrick, you just hope it’s going to be a success and if not then you hope the next one is going to be a success. What you don’t do is tell him what to do, either you hire him or you don’t.”

FB: Which is why they agreed to pull A Clockwork Orange from cinemas after Stanley asked them to.
JH: Absolutely. And that was only in the UK.
AY: He did have a unique relationship with the studios, I don’t think there is any other director… I mean they trusted Stanley and as Jan said, they knew he had a unique talent and vision.
JH: Yeah, he was hoping Barry Lyndon would be a big hit – Thackeray novel, English literature, it was not successful in the UK, it was not successful in America, Japan, yes, but that’s not enough.

FB: I didn’t know that.
JH: Yeah, Japan and Latin countries are an exception. Eyes Wide Shut, hugely successful in Latin countries and in Japan, flop in England, flop in America, very strange. I got a fax from the manager in Tokyo, after the premiere of Eyes Wide Shut and it said something like, ‘It’s amazing what this film does to the audience, couples are leaving the cinema holding hands’ [all laugh]. Which is obviously something you don’t do in Japan.

Stanley Kubrick: The Exhibition will be on at London’s Design Museum from 26 April – 17 September 2019.