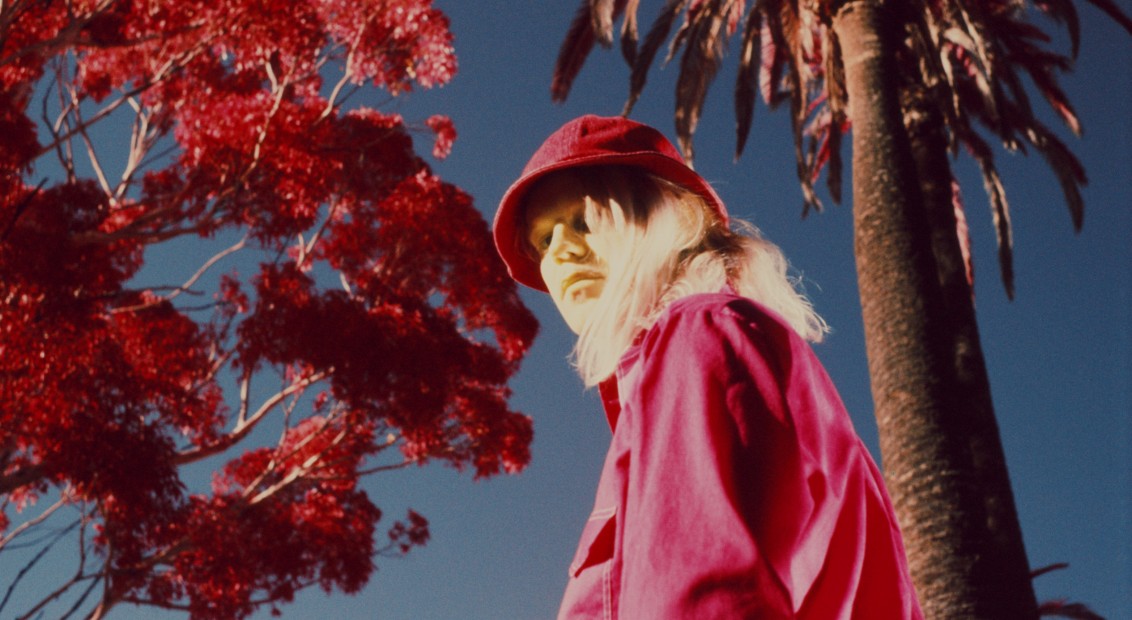 From MJ to Debussy: Connan Mockasin talks us through five of his favourite albums

Connan Mockasin is speaking to us from Tokyo, the latest city to be called home by the New Zealand-born singer following stints in LA and London. The sprawling, neon metropolis feels an apt setting for Connan and his idiosyncratic, genre-muddling practice to develop and thrive – a city of quiet humility, more reflective of his unassuming, gentle nature than LA’s cosmetic vacuum. This is not to say Connan’s music has found parity in the zany company of squirting bidets and cosplay cuddling parlours, rather the city’s fair share of quirks and oddities are more in line with Connan’s own enigmatic wave-patterns.

He rarely listens to music, barely ever plays his guitar, ad-libs many of his lyrics and records his albums across a matter of days – when time and place align in a way that feels instinctually right to him. His forthcoming album Jassbusters, was conceived in a spasm of creativity lasting less than a week, something he mentions in passing as though it were some menial footnote, but a telling admission of his selective relationship with music: playing when he wants, how he wants.

Here, he outlines that relationship with five albums that have embedded themselves in his musical memory.

Finn Blythe: There’s a real eclectic mix here, I guess we could start with Hendrix. When did you first get into him?
Connan Mockasin: I got very in to playing guitar when I was around ten years old and I hadn’t heard of Jimi Hendrix, but it was around that point I was watching a film with my mum, it was Under Siege or Under Siege 2, one of those, do you know the movie?

FB: Steven Seagal, sure.
CM: Yeah, well I think it was the scene with the view over the top of the ship, Jimi Hendrix was playing and it was just amazing, I had never heard anything like it. I asked mum who it was and she said, “We’ve got a record of his in the cupboard.”

FB: Nice.
CM: And that was Band of Gypsy’s. So I remember dubbing it off the record to cassette and I would listen back and rewind constantly listening to parts that I was trying to copy.

FB: So he kind of influenced your earliest memories of playing guitar?
CM: Yeah, I really liked blues guitars, before him I liked B. B. King and Eric Clapton and then I got really into that Band of Gypsy’s record. So I got obsessed with the guitar, I would sit and obsess over things but then I just stopped and the only time I ever play now is to record or play live.

FB: Right, so you wouldn’t just pick up the guitar in your room?
CM: Not really no, I think I just played too much. I was playing several hours a day, just whenever I could. Now I like surprising myself when I do play it because I just get bored very easily with things – does that make sense?

FB: Sure. But what replaced that void?
CM: I always enjoyed making things, I was obsessed with carnival rides for a long time, ones that fold up on trucks. And, well before music I loved drawing and I loved painting, but those sorts of things feel very similar, in that groove I guess when things are just happening with your thinking.

FB: Right, a mind state?
CM: Yeah, I like that feeling.

FB: I’m not at all familiar with Jean-Michel Jarre. What can you tell me about him and your relationship with his music?
CM: I especially appreciate the way the record flows, I love that, I love how it just… He captures a whole… Like I was saying before, I love atmosphere, I think that’s why I like Japan as well, it’s got a really strong beautiful atmosphere.

FB: Right.
CM: If you just go for a walk, you know, it feels… And I think Jean-Michel Jarre captures a lot of atmosphere and that’s what I like. Before I make a record, I like to feel an atmosphere or a world. When it feels really strong, I can feel how everything sounds, that’s when I start, so that’s why I can have quite big gaps between records, I don’t really feel like making for the sake of making. We recorded in Paris for this Jassbuster record, I wanted to do it there because I don’t normally record in studios, I don’t really like classic studios except I really like this one in Paris run by my friend Renaud Letang who was the live mixer for Jean-Michel Jarre for a good decade or more.

FB: What’s your aversion to classic studios?
CM: I think it’s a mixture of there being too many buttons – that intimidates me, so my first two records I made by myself with very limited equipment, but I wanted to do a live band recording.

FB: And what’s so special about this studio in Paris?
CM: Again it’s the atmosphere and I really like Renaud. I met him through Charlotte Gainsbourg so we’d worked a bit together doing some demos for her. But in the studio, I like setting up places that are new, that aren’t normally being recorded in, somewhere with a view and a nice atmosphere, again. Recording studios have thousands of people come and go and it feels like that sometimes, you’ve got the same instruments and people usually get excited like, “Oh, I’ve had the Rolling Stones record in here,” or something like that and that turns me off.

FB:You can’t go wrong with Debussy’s greatest hits.
CM: The reason it’s Greatest Hits is because that was probably what I heard most growing up. My dad would listen to it every Friday, Saturday and Sunday. If we were watching television in the evening he would drink and put it on the stereo, really loud, and walk around the house drinking, listening to it – he was trying to… What would he have called it? Educate us [laughs]. So that was to have a battle against us watching television I think.

FB: Were you close with your dad?
CM: Er… I’d say we’re closer now. We actually made a record together, I’ve always wanted to make a record with him and we made one together this year in Texas in Marfa, so we’re looking forward to releasing that at some point.

FB: Am I right in saying Jassbusters was recorded in less than a week as well?
CM:  Well it was my first band recording, and it’s live so it doesn’t take long, most of them are first takes, I didn’t over dub the lyrics, they’re all made up, ad-lib I guess you’d call it. With a band, the good thing I found was if something wasn’t feeling right you knew it in one minute and you just stop that and try something else. When you’re recording on your own you can work on something for a long time and you don’t know if it’s going to work or not until you’ve finished.

FB: It’s quite an extraordinary ability to just ad-lib lyrics like that.
CM: I don’t know, I don’t want to get too precious about lyrics and the funny thing is some tend to make more sense later if you just let them come out. It wasn’t something I planned on doing, but I just, I don’t know, I went to write some lyrics a few times and it just didn’t feel right, so I didn’t do it, it felt too forced.

FB: This is a huge record, one of the largest selling of all time and so many amazing singles.
CM: I loved listening to Michael Jackson growing up and I just remember that was the first time I was excited for a record coming out.

FB:  And how did you get hold of your records in Te Awanga?
CM: My older brother got Dangerous on tape, he’s still got it, and my next door neighbour Blake Prior also got it on tape but he left his in the car and it melted [both laugh].

FB: When you listened to it as a nine year old, the racial references that run throughout perhaps didn’t quite register at that age, but that’s how the album keeps giving.
CM: Yeah, I haven’t listened to it for a while, but the last time I heard some of it I was shocked how intense the snare was and all the sounds on it were really harsh, I mean, if something was mixed like that today it’d be shocking, it was quite brave, out-there stuff.

FB: And that was Michael’s first album without Quincy Jones, How was it for you going from playing in a band to doing your solo work, how did that impact your music?
CM: Yeah I had different bands, I was writing the music so it kind of felt like I was doing my own project anyway but then going completely on my own felt great. I only made my first record, Forever Dolphin Love, because of my mum – I don’t really like the music industry, I don’t like any industries, so I decided I didn’t want to be involved, but then my Mum told me I should make a record, just because she thought it would be nice, even just for myself or her or whatever. I had a tape machine, a few bits and pieces and that got my really excited, having limited equipment and that it wasn’t for anyone, I could do whatever I liked.

FB: Moving on to your last album, what can you tell me about it?
CM: I mean it’s not really like the Jean-Michel Jarre one where it’s a crafted record, it’s definitely just tracks, same with Dangerous, but it just sounds great from the start. I wasn’t really sure, I was running out of ideas so that one just popped in my head. It’s a record I own and it feels good to put on. I love Sly, he sounds very instinctual and that’s always attractive.

FB: Sort of a reflection of your own instinctual style?
CM: Well I would hope so, but I can’t be the judge of that.

FB: And so if you don’t really play much music, how do you fill your time?
CM: Well, yesterday we went out to some kind of light exhibition, Team Lab, and that was amazing, I don’t normally do that sort of thing but Hiromi [Connnan’s girlfriend] got some tickets and we went on a date. After that we went and had dinner, there was a massive typhoon yesterday.

FB: I saw on the news, unbelievable.
CM:  Yeah, it was crazy… We saved a pregnant woman.

FB: Oh my god, what happened?
CM: She was just blown to the ground. The wind was so intense.

FB: I saw trucks getting blown away.
CM: Yeah bikes were being blown down the street. But we went to a Saki bar and I tried different Saki and then I got a bottle and drank more at home.

FB: It’s quite lethal stuff
CM: It is.