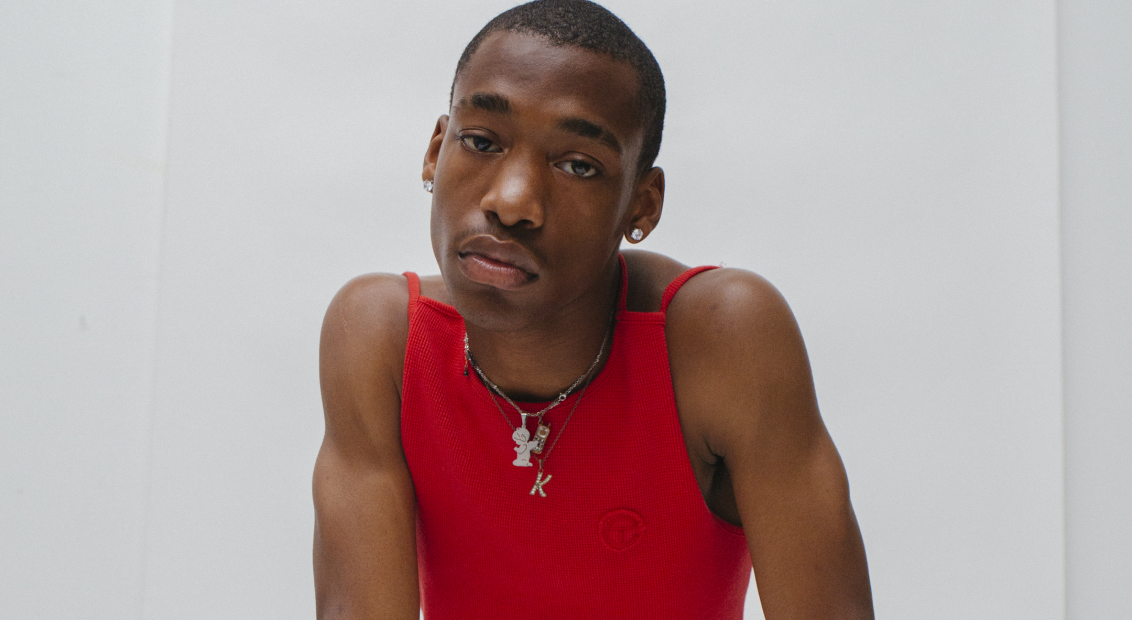 Get to know Femme Thug, the angel on Blood Orange’s Negro Swan artwork

The 19-year-old prom king turned art school ‘It Boy’ connected with Hynes via Instagram and, almost immediately, the newfound friendship took Kai to the album cover of one of the most anticipated releases of this summer.

But it does not end there. Three weeks ago, the teenage artist also appeared as the lead in Mr Hayne’s music video for Jewelry, and he is now plotting to take over the local independent film scene.

A DJ, dancer, model and artist that has been keeping the Lower East Side underground scene alive in every sense of the word, when Baynes is not busy throwing parties, walking balls or airing a pirate radio show Vogue Femme Radio, he is gracing the covers of local art magazines. 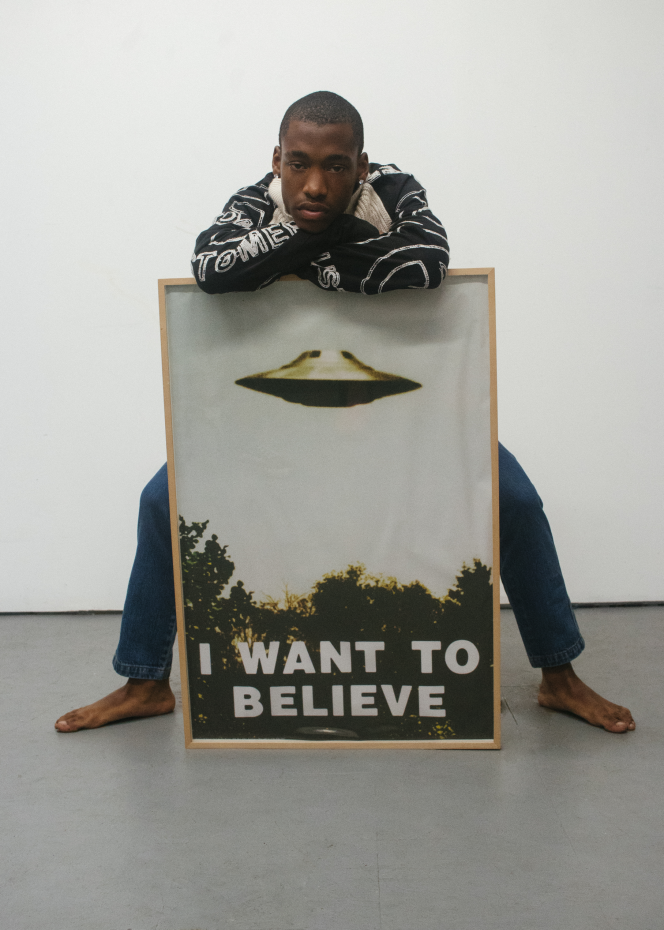 Undine Markus: What inspired you to move to New York City?
Kafiq Baynes: I moved out here last year when I started my first year at Parsons School of Design. Then I decided to move here permanently.

UM: What degree are you pursuing at Parsons?
KB: I didn’t want to feel trapped or limited so I went into Fine Arts.

UM: What are you up to these days apart from throwing parties?
KB: I’ve been out here for a year and this changes. Lately, it’s been DJing and vogueing. I pick up mediums but eventually get bored with them, I feel like next it’ll be film.

UM:When did you first meet with Dev Hynes?
KB: The first time I meet Dev was actually on the set of the Jewelry but we had spoken before.

UM: How did the idea for a shoot come about?
KB: My guy Nicholas hit me up and asked me if I wanted to be in it. 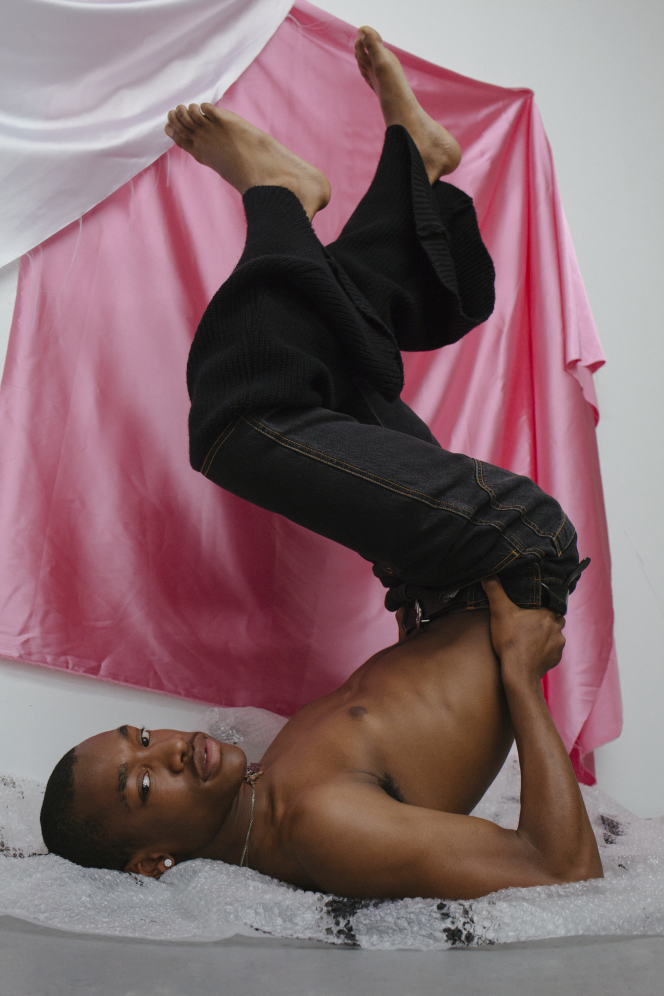 All clothing by Telfar

“So I took it upon myself to become the first black angel.”

UM:Was Dev heavily involved in the creative direction of the album artwork and Jewelry?
KB: I believe he had a lot to do with everything.

UM: Tell us more about the story behind Jewelry?
KB: To me, It’s about being that brown queer boy listening to music for you… dedicated to you! It’s that moment of pride. It’s a feeling.

UM: How did you come up with the character of an angel? What is the symbolism that you wanted to highlight with it?
KB: I came up with character of an angel when I saw this video clip of Eartha Kitt talking about the church and she said, “When you walk into a church you’ll see white angels…” So I took it upon myself to become the first black angel. 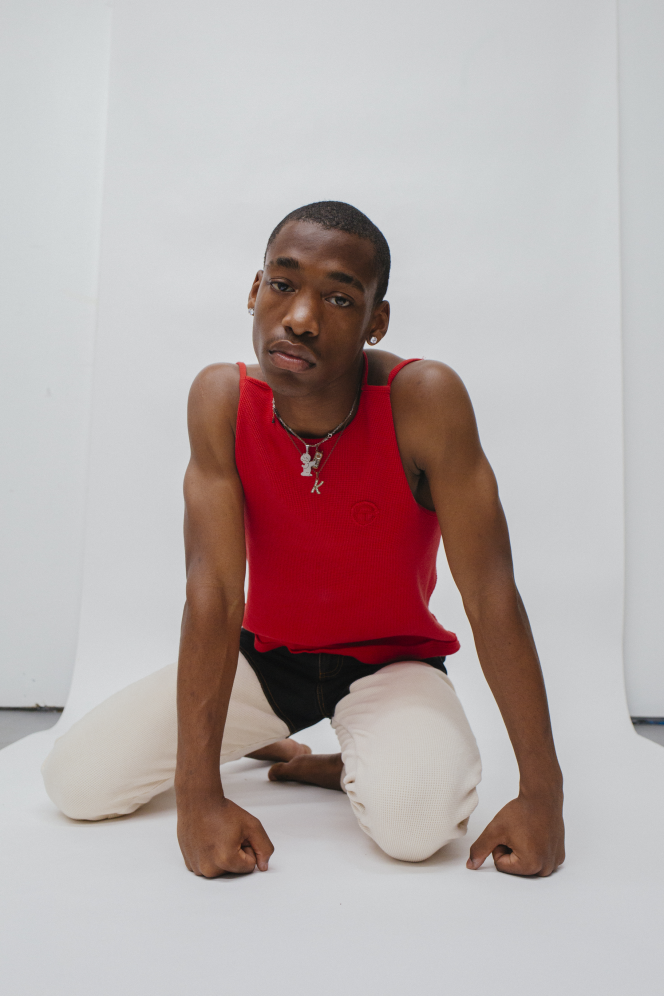 All clothing by Telfar

UM: Have you created any other work with Dev?
KB: Not Yet!

UM: What are your next moves?
KB: First thing is going back to school for the fall semester. Getting back in a stable, creative space. Oh, and I also plan on releasing an EP.

UM: Is there anything missing in the NYC scene that you are trying to complete with your work?
KB: I honestly think I’m just joining a crowd of precious people, very special ones. I definitely feel like this generation is shaping the future. Like, we are going to be the next icons. Sorry to use that world, but honestly…

UM: What are some of your favourite emerging fashion brands and artists in your extended community?
KB: There’s so many! My favourites would be Hype Williams, David LaChapelle, Dexter Navy, Ian Isiah, and Femme Thug.