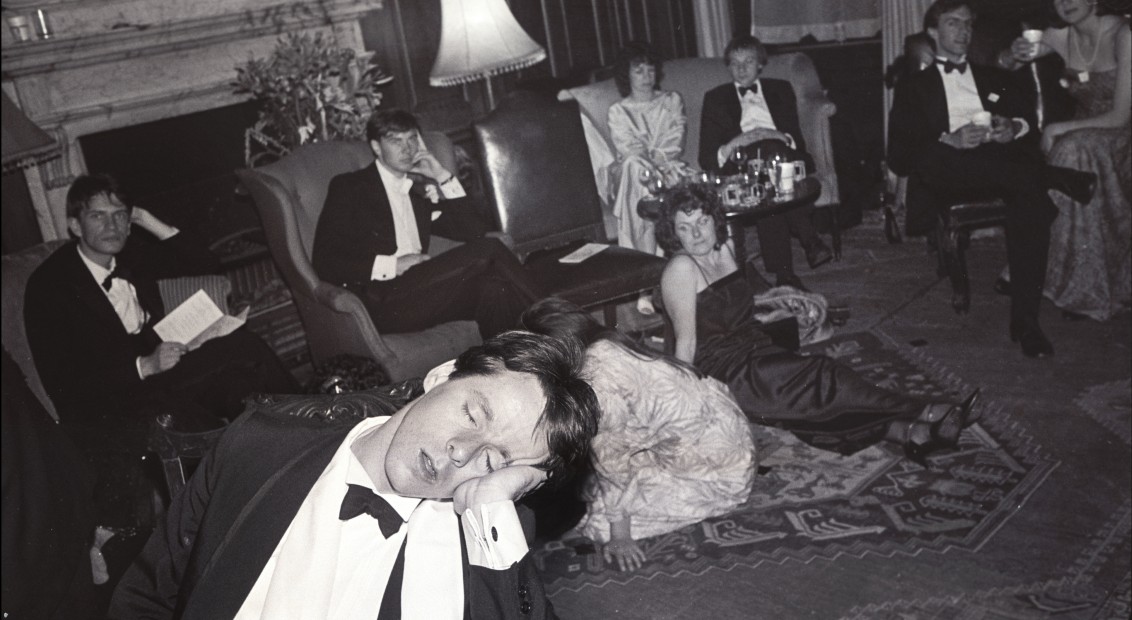 The Tatler years: Dafydd Jones on his photographs of Britain’s partying aristocracy

Opening at the Photographer’s Gallery this week comes a miniature retrospective of Dafydd Jones’ work for Tatler magazine. The Last Hurrah spans 1981 to 1989, encompassing both Jones’ first job in the industry and a period of widespread political upheaval, during which the affluent, old elite who Jones was tasked with photographing, contemplated the precipice of momentous change.

During a tumultuous decade; Falklands, the miners strikes, the ascendancy of Thatcher and ‘I’m alright, Jack’, all sound-tracked by Harry Enfield’s Loadsamoney, Jones straddled two worlds of old and new. In 1979, Tatler’s effervescent young editor Tina Brown (only 25 at the time) headed a revitalised society magazine, saved from extinction by millionaire Gary Bogard, that she would modernise into a glossy bi-annual working with some of the most celebrated photographers of the day. Meanwhile Dafydd spent his years at the magazine traversing the country in the small hours, driving from Oxbridge balls to celebrity soiree’s and debutant dances to fill its party pages.

The result was a glimpse into a world rarely seen. Black and white shots of tuxedoed partygoers in hedonistic abandon (when still conscious), showed an elite class either unaware of the social upheaval that surrounded them or choosing to embrace the final days of Rome. We asked Dafydd to recall his memory of the period and talk us through some of the moments he captured, many of which he overlooked and only recently discovered after trawling through old contact sheets. 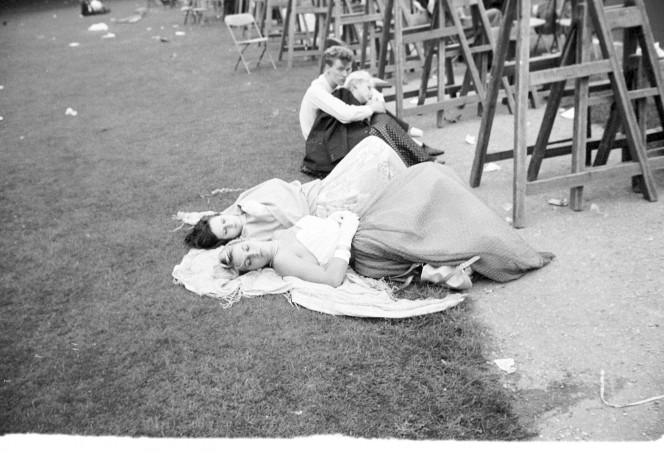 Finn Blythe: Can you talk us through this image?
Dafydd Jones: A collector called James Hyman bought about sixty of my vintage prints and called it the Tatler Years when he put most of his collection on a website. Going through those pictures with him gave me ideas about other pictures, so I started looking through the archive and sorting them into these boxsets of pictures. The Sleepers was a box I produced near the end of last year, I went through my collection of pictures of people sleeping at parties in the eighties and they make a nice set.

The first one is the Trinity May Ball in Cambridge, it’s taken in June 1984, I think the one in the show is a vintage print, so this is a picture that wasn’t printed in the magazine, they really only wanted named people and because people were sleeping I never got their names

I used to like the soft light early in the morning and I preferred to take pictures of the May balls just as the light started coming up, the crazy bit of the party was over and people did often look quite beautiful. Someone else said that the picture of the two girls was a sad reflection on the state of English manhood, that these women were kind of left on their own, abandoned, sleeping.

FB: What did you make of that?
DJ: I thought it was quite funny. Anyway, that’s been one of my favourite pictures for quite a long time actually, it sort of typified that period I suppose. 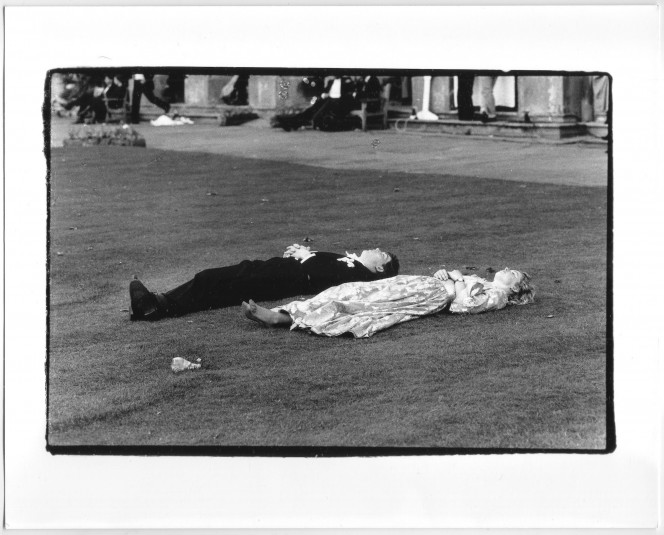 DJ: On the contacts [sheet] I marked the picture near that one, which isn’t quite as good as that one and I basically missed it. When I printed up my sleepers box thirty years later I thought it was a better picture than the one we’d selected – which also hadn’t ran in the magazine at the time. So I printed an edition of it and it was first seen in the Burberry Here We Are exhibition, they used it on their SS18 invite too. When it appeared, someone I know already, a girl called Kitty Arden, sent me a message because she thought it was her. I gave her a large print of it which we looked at and she identified her watch or something and said it was her. She couldn’t remember who the guy was though. 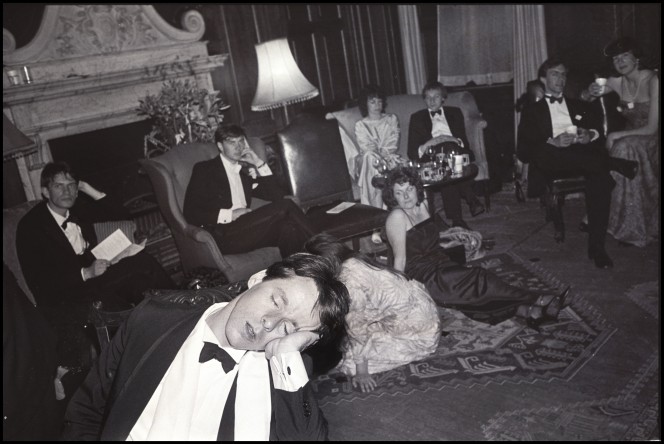 FB: What stage of the evening was this image taken?
DJ: I don’t know, probably about four in the morning because I used the flash so it must have been dark. But those balls start at about seven in the evening and go on to seven or eight in the morning so it’s a long time.

FB: Did you ever have a Golden Hour for taking photographs?
DJ: Between six and seven, just because I like the light. One time there was a ball going on in Cambridge and I told the organiser I’d come at dawn. She phoned me at something like five saying, “Where are you!”, and I’d overslept! I was still in bed in London [laughs]. Anyway I got out of bed and drove to Cambridge and we still did a page of pictures. That was in the nineties when I was still doing this stuff, I wasn’t there for dawn but they were still partying at seven. Anyway the Trinity Hall Cambridge one was one I never considered at the time, I missed it.

FB: So did it take on a different life for you once it was printed?
DJ: Yeah, well I think it’s more interesting than some of them because you’ve got a group of people. I like the people sitting in the background and I can’t remember much about it.

FB: Did these people ever rejoin the party?
DJ: They might have, or  you might have carried on. What I often used to do is go from one ball to another in Cambridge because sometimes there’d be two or three going on during the same evening, so I’d go to one next door or a little way up the road if it wasn’t very interesting.

FB: Was there a hall that was renowned for throwing the best parties?
DJ: Yes, one of the poshest ones was Magdalene, which is in Cambridge, it used to have the most expensive tickets. I think the last time I went to a Magdalene ball there seemed to be a lot of Americans there, the only ones who can afford to go there, probably. 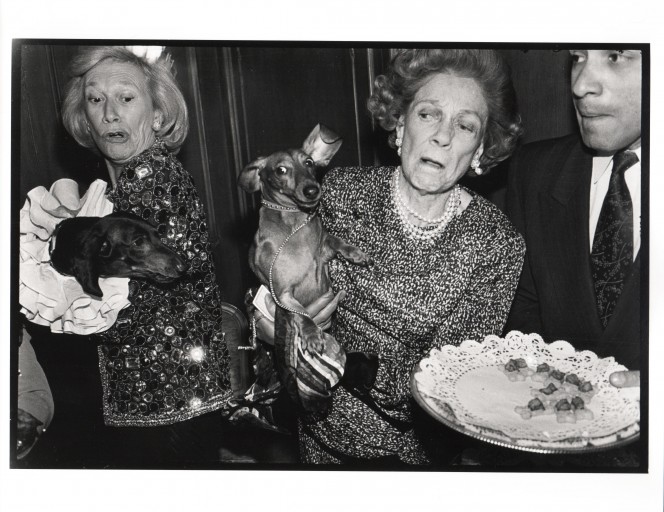 DJ: This one is slightly different. It’s kind of the odd one out of the exhibition because it was taken in New York in 1990, it’s Dachshunds fighting over canapés. Iris Love on the left and Brooke Astor on the right, they were two friends, both Dachshunds owners. It was a party of a New York dog show, and it had a subsection for Dachshunds and they had their own Dachshund owners party. They were canapés for people not dogs, but the dogs are certainly trying to make a lunge for them. I gave them both prints of that picture and Brooke Astor said that it captured such a funny expression on the dogs’ faces, and she looked me in the eye as she said it but there’s a funny expression on hers as well. If people ever ask me to give a print for a charity auction, I’ve given several prints of that picture and it always sells. Because it’s slightly stressful being a photographer and giving a picture to an auction, you think, “Oh god, will anyone want to buy it?” 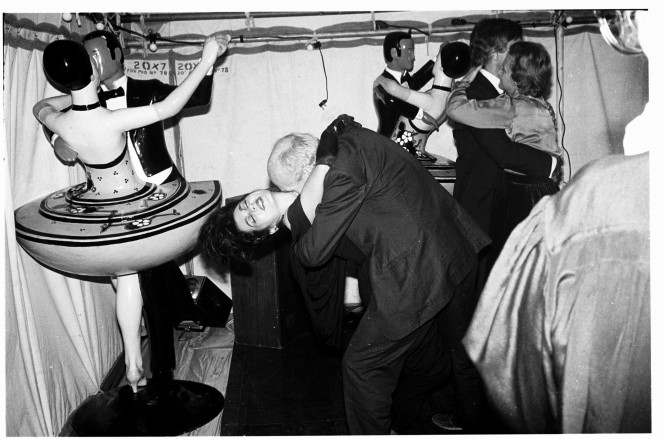 DJ: The fifth one is the one of the couple dancing, he’s kind of kissing her neck and there’s a statue behind them. Luciana Martinez and Deryck Healey in 1981. Luciana was an artist and sadly died very young, ten years after that photograph was taken, maybe twelve. She was very beautiful.

FB: That was at the beginning of your time at Tatler, so was that one of your first dos?
DJ: Yes. I was a prize winner in a photography competition and Tina Brown gave me some freelance jobs for this magazine. She said if I moved to London she’d give me a contract to photograph features and parties. And she was very young hersel, she was about 28 or 29. The magazine had very few staff, it had this wonderful brief to photograph parties but Tina didn’t want the type of party coverage that had previously been appearing in the magazine. She didn’t exactly know what she wanted but she knew she didn’t want that.

They were still working out how to have access to these parties when there was a little story in Londoner’s Diary about Terence Conran having his fiftieth birthday that weekend and what an amazing do it was going to be because he’d just sold his company. This was pre-mobiles so I phoned up, I think it was the Friday and the party was next day, and managed to get through to Terence Conran’s secretary who said, “Yes of course, come and take pictures”. She told me to come after dinner and gave me the address. I got there and photographed for an hour and a half, and took the images back to Tatler’s office on the Monday. Unknown to me, Tina had seen the same article in the Diary called Terence Conran and he’d said no, he didn’t want a photographer coming. I’d probably called the wrong person who’d said yes. So anyway, the magazine ran the pictures and I think Terence Conran was annoyed… But I’d had permission.

Dafydd Jones: The Last Hurrah is on show and available for acquisition at The Photographers’ Gallery, London from 3 August. The book by same name will be published by STANLEY/BARKER on 2 August 2018.